Mad Dog is a minor nightmare. He’s extremely fast, strong, tough and aggressive. He has strong claws, a bite that can penetrate metal thanks to his bionically strengthened jaw, and enhanced senses.

His teeth are able to secrete vast quantities of poison (making him foam at the mouth) to which he himself is immune.

Lastly, his mental state is such that establishing mental contact with him is very hard.

He was the husband of romantic heroine Patsy Walker. Unfortunately, after serving in Việt Nam, he became somewhat psychologically damaged and highly irritable. While he was in the process of busting his marriage, he became responsible for the security at the criminal corporation Brand. Patsy divorced him.

Several month later, Patsy became Hellcat. She fought her husband at Brand, threatening to enucleate him if he did not release the Avengers. Thus humiliated by his ex-wife Baxter volunteered for a Brand mutagenic treatment and became Mad Dog.

He’s since been a merc and professional criminal, occasionally trying to kill Patsy. He has worked with Mutant Force, Professor Power, Crossfire and AIM.

Mad Dog continues to degrade psychologically. In recent appearances he displayed animalistic tendencies as well as long, tangled hair and a long beard. He may in time become completely bestial.

Mad Dog is a big, black haired, military man with a small moustache. He is almost always seen in costume, a dull brown and black outfit with a stylized hell hound head on the chest. He does not wear a mask anymore.

Last time he was seen, he had very long hair and a long beard.

Remember the old joke about the DI and the pitbull ? Well, Mad Dog is the worst of both worlds. He’s as savagely aggressive as the pitbull, and quite likely to bite your arm and stay there until you die. In combat, he usually goes berserk.

And he’s as nice as the DI. He loves to order people around, belittle them, yell at them, humiliate them and if given a chance hit them. He especially likes hurting people he knew or loved, such as his ex-wife.

One wonder if his more recent attack dog-like behavior might an improvement over his old personality. 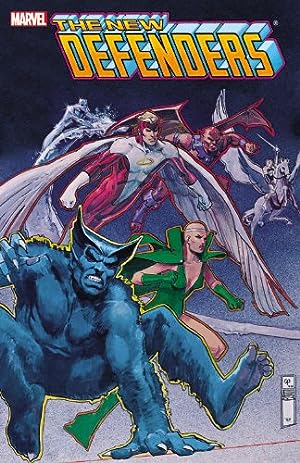 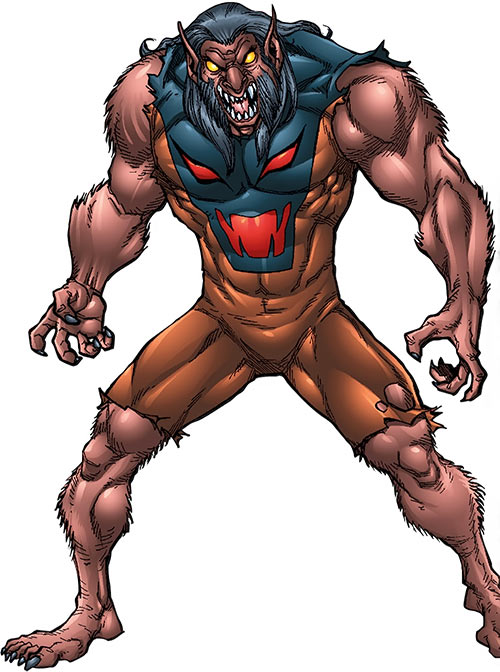 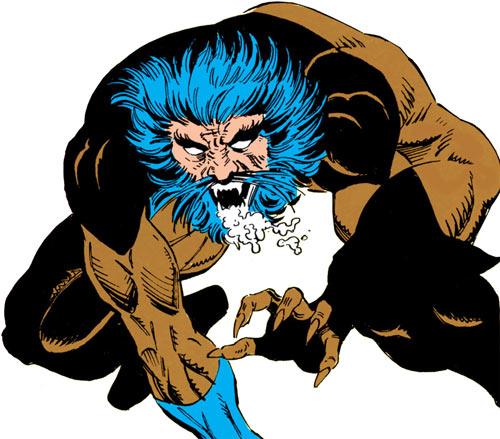