Hatap is a tall man, especially for Classical times. He seems to be a trained ancient warrior, skilled in wielding a sword or driving a war chariot.

The so-called Mad Pharaoh is also a sorcerer. Howbeit, in DC Heroes terms he seems to be more of an occultist. That is, he doesn’t directly cast spells by making funky hand gestures and incantations like Doctor Strange. Instead he relies on dweomers  in magic items.

Whether he enchants this stuff or finds it is unrevealed, but he demonstrated:

Hatap could easily have other charms. These might, for instance, enable him to survive fatal-seeming wounds.

King Hatap lived in or near Ancient Egypt, probably circa 35 B.C.. It is vaguely possible that he was from the Eastern Territories (modern-day Lebanon and Syria). He warred with the Ptolemaic rulers, which back then meant the famous Cleopatra (Cleopatra VII Thea Philopator).

Hatap was reputed for his mastery of the dark arts and his ruthless crimes. He was often referred to as “the Mad Pharaoh” by later historians. His sigil was the poison asp, which might indicate ties with the deity Seth. Or perhaps the Elder God Set, as the two are routinely confused for some unfathomable reason.

Though his sorcery scared the Ptolemaic Egyptians, Hatab was defeated by Cleopatra’s armies. He seemingly killed himself by drinking poison rather than be captured. The Mad Pharaoh left a very specific will about how his body should be treated. For unrevealed reasons, Cleopatra had her servants apply these instructions.

(One may imagines that threatening dire post-mortem curses in case these instructions were not followed was involved.)

Hatap was buried in an unspecified, walled-over location. In 1963, it was a few hours away from Cairo in a Jeep. Yet, he wasn’t actually dead – the “poison” he drank was a suspended animation potion. Presumably, his body had not gone through the normal embalming process. Perhaps it had simply been wrapped up using specially-treated fabric.

It goes ding when there’s stuff

In 1963, an archaeologist and friend of Tony Stark narrowed down where the “Mad Pharaoh”‘s tomb was. But locating the exact room would take months if not years. He asked Stark to consult ; as Iron Man Stark used electronic scanning equipment. He found and drilled into the tomb in minutes.

This awoke Hatab from his suspended animation. The Mad Pharaoh gained an immediate mastery of English and of the current context. He then decided to force Stark to work for him and go back into time. Stark’s technology would be used to conquer Ancient Egypt and beyond.

To force his hand, Hatab infected the archaeology camp with a crippling disease. When Stark agreed to work with him, Hatab removed the disease from everyone.

Wasting no time, Hatab then took Stark with him back into time. Apparently, from the point of view of the locals, he had only been “dead” for a few years. However, Stark immediately ran away, changed into Iron Man, and flew off. The playboy’s goal in accepting Hatab’s blackmail was really to play tourist. In particular, he wanted to see the famously beautiful Cleopatra.

(Note that technically Hatab and Stark travelled to a parallel version of the past closely resembling Hatab’s past, given how time travel works in the Marvel Universe).

Age cannot wither her, nor custom stale her infinite variety

At this point, Cleopatra’s army was at war with the Romans. Since the story is based on a pop version of History, and presumably high school memories of Shakespeare’s Antony and Cleopatra, one can guess that the year was 31 B.C..

At that point, Cleopatra and her lover Antony were in terrible trouble with Antony’s rival Octavian . A fight for legitimacy in Rome was going on. The Egyptians were badly defeated at sea by the Romans. During the ensuing invasion, Antony served on the front. Meanwhile, Cleopatra was kept well behind allied lines.

When Iron Man flew in, he decided to back the Egyptians. He routed a Roman legion, then sunk a Roman galley before it intercepted the fleeing Cleopatra. Cleopatra (who’s of course White and blue-eyed), upon learning that Hatap is back, beseeches Iron Man to stop him. Since the Romans have been routed for the nonce, Hatap’s awful sorcery represents an even worse menace.

Iron Man take the job – if only because he needs Hatap’s time-travel charm to return to the present.

Though the Mad Pharaoh comes charging with a large army, Iron Man routs them too and confronts Hatap. Using a squirt of oil, he forces the Mad Pharaoh to drop the magic charm before Hatap can use it. Hatap lunges forward to retrieve it but accidentally impales himself on his dropped sword. This seemingly kills him.

Cleopatra attempts to convince Iron Man to stay with her. Presumably, she has by then heard that Antony has committed suicide upon hearing a false report that she has been killed. Yet, Stark leaves back to 1963 after ogling her one last time.

(Cleopatra presumably commits suicide a few days later with Antony dead and her armies routed anew by the Romans. But heh, good ol’ Tony was just here to check out the goods, right ? Remember ladies – Tony Stark is a jerk.)

Not much was apparent. A crafty bad guy and ruthless evil conqueror with some nasty magical tricks up his sleeve.

“With my sorcery, I have caused a disease to affect your workers ! The plague will spread unless you enter the past with me ! For only *I* know the cure !”

DC has many ties with Ancient Egypt. Hawkman and Hawkgirl, the Blue Beetle, Black Adam and the Wizard, Metamorpho… it was a thing. A variant on the Iron Man story could have trivially happened to any of those.

Alternatively it could have been a Challengers of the Unknown adventure. Of course, defeating the Romans then Hatap’s army would have been much harder. Giant mirrors focusing sunlight would presumably have been involved.

Advantages:
Expertise (Ancient Egyptian artefacts), Language (Demotic, and probably others such as Ancient Greek and some Aramaic tongue).

Connections:
An unspecified hostile army… let’s say arbitrarily some fictional Seleucid faction of raiders fighting both the Romans and the Egyptians.

We’re going to arbitrarily assume that all of his sorcery was actually artefacts on his person, though only the potion and the golden charm were demonstrated.

Most of the stats are arbitrary since so little is seen of him. But as usual these are reasonable deductions based on his strategy and behaviour.

Source of Character: Tales of Suspense #44. 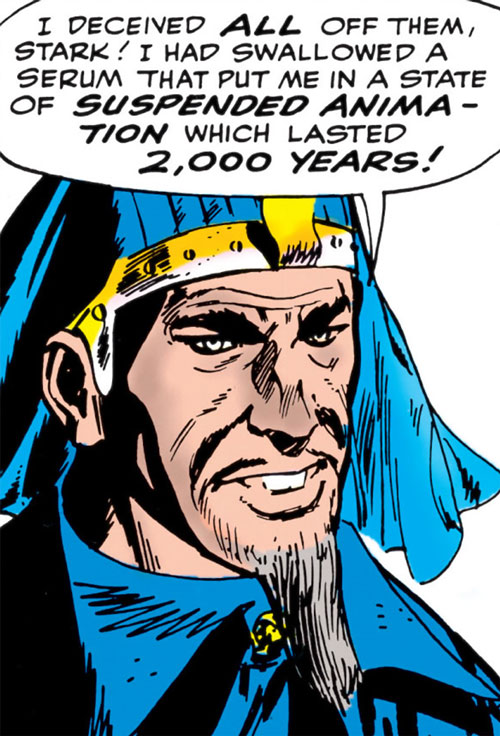