Madam Fatal is a Golden Age  character from Quality Comics. The feature ran in Crack Comics from 1940 to 1942, then she essentially vanished.

The Quality characters were later bough by DC Comics. So she retroactively existed in the DC Universe’s 1940s as well.

I didn’t get to read Crack Comics #19 when assembling this profile.

Madam Fatal’s schtick is that he’s an amateur male detective disguised as a little old lady to investigate. In the story, this is always presented as a cunning disguise to throw off suspicion. Essentially, it’s meant as an unusual sort of undercover or plainclothes work.

In the context of the 1940s, this is unremarkable. Though the 1920s and 1930s, “drag balls” where everybody cross-dressed were a popular theme for parties. Many drag balls had a huge attendance.

In everyday life, cross-dressing was seen as subversive in many localities, with laws against it. But if this was part as a performance (like a party, or a play) it was mostly seen as good fun. Getting a waiver for such events was simple in many cities.

Stanton is a professional actor and a master of makeup, with a particular talent for cross-dressing. His stage performance as an elderly woman was critically acclaimed, and became the base for his Madam Fatal act.

He also became a millionaire on the stock market, somehow sailing through the 1929 crash.

Despite his age (he’s at least in his 50s), he further is a remarkably strong and adept pugilist.

Madam Fatal often turns items around her into weapons. She’s no Jackie Chan, but her tricks are simple and effective, such as entangling people charging her into drapes, or ramming thugs with an apple cart.

Stanton served as a doughboy during WWI, and is assumed to have retained basic infantry skills. He’s also an expert swimmer and diver — presumably he had an interesting life.

Stanton is socially adept. He is skilled both at establishing sincere rapport and at fast-talking and bamboozling the enemy. He leverages this to act as a competent, self-taught intelligence-gatherer.

As Madam Fatal, Stanton is usually considered to be utterly harmless and inconsequential. Tough guys will even speak of their illegal plans with Fatal within earshot, perhaps because they assume she has very poor hearing.

Madam Fatal often resorts to a narrative convention that was common back then. She cracks the case using an obscure little factoid of uncertain provenance. The first example of this was typical of the era. Fatal knew that the colonel was an impostor because he said a liquid was red. But Stanton somehow knew that the real colonel was colour-blind.

This style of sudden plot resolution wouldn’t work in a RPG. But if Fatal is an NPC the GM shouldn’t feel too guilty about using this schtick to move things along.

As was the style of the day, Madam Fatal usually guesses right, stumbles upon clues, neatly wraps the final action, etc. since the stories have to be short. She experiences a lot of lucky breaks.

Richard Stanton was a famous stage actor in the early XXth century. His career peaked with an acclaimed play in 1930 – after which he retired. He could afford it – Stanton was a millionaire, thanks to wise and very lucky stock market investments. However, other reasons leading to his retirement were far less felicitous.

Decades before, Stanton’s wife had been courted by one John Carver. That was before she decided to marry Stanton. Out for revenge, the insanely jealous and criminally connected Carver kidnapped the Stantons’ daughter. The police never found the “Stanton heiress” (as the press called her). Mrs. Stanton passed away in despair.

After he retired, Stanton spent nine years tracking Carver down. He mapped out his racketing activities in various cities. To gather information, he disguised himself as an elderly woman, Madam Fatal, and consistently fooled everyone. Soon, Stanton was spending more time as his alter-ego than as himself. As such, he became a confidant to those racketed by Carver.

Stanton did find Carver, though the racketeer discovered Fatal’s secret in turn. Carver stated that Miss Stanton was still alive, but as the two men struggled the criminal accidentally shot himself dead.

Determined to find his daughter, Stanton continued investigating as Madam Fatal. Seeing the good he had done in his cover identity, Stanton also decided that Madam Fatal would continue to fight crime and lawlessness for as long as “she” could.

However, in a typical 1940 comic books continuity moment, the plot about his daughter vanished and our hero-with-a-gimmick embarked in a series of increasingly formulaic short adventures.

Madam Fatal prevented foreign spies from stealing a new explosive formula guarded by an overconfident police sergeant. She overcame saboteurs who had hijacked a secret coastal defence torpedo base then used it to pillage ships. She stopped another ruthless spy ring from stealing critical FBI documents.

She then foiled the plot of a desperate circus director to kidnap a rich heiress. Madam Fatal financially saved the circus and had her two local allies (General Boy the dwarf and Cyclops the giant strongman) succeed the imprisoned director.

As Stanton, he later came across a male spy using a disguise very much like his own to steal a special explosive. With the help of the Coast Guard, Fatal stopped him and his allies 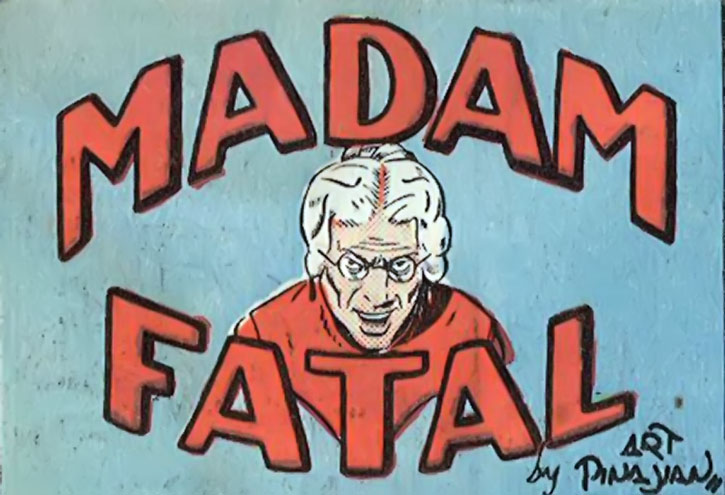 Madam Fatal then stopped the gang at the House of Terror. The gang’s leader used his lightning-emitting invention to racket rich people, including a friend of Stanton.

A professor who had lost his special formula in the sinking of his boat-lab later contacted Stanton to investigate the underwater wreck, said to be haunted. As Fatal, the former actor defeated a conspiracy looking for the formula. Madam Fatal and an archaeologist friend then defeated the Tiger Woman.

Madam Fatal also teamed up with the Jester, a criminal looking much like the Jester (Chuck Lane, a costumed hero who appeared in another Quality book soon afterward). This occurred during yet another crime to steal some secret formula from some professor. The Jester had turned against his fellow criminals — as this professor was his father.

Madam Fatal later aided a couple of friends, Tom and his wife. The latter’s past had caught up with her in the person of Dwarf Rogan, a diminutive but very strong gang leader whom Fatal defeated.

Madam Fatal also beat the Blue Cloak Gang. These guys used the trick cloak of a kidnapped stage magician to kill their victims. Some time after this she foiled the conspiracy of a jilted Romani bloke to marry a woman loving another man.

Since it had been way too many stories without spies to foil, Madam Fatal then prevented traitors from stealing the model of a new American bomber. She later ruined the strange plot of the Crimson Vulture, which involved booby-trapped stuffed vultures with burning eyes used by a criminal mechanical genius and his gang to extort money from rich people.

Madam Fatal went on to defeat the gang who had stolen the apparently cursed Bloodstones of Mu (no relation). She also foiled another conspiracy to recover another treasure in another sunken boat. And yes, there was also a professor’s invention involved.

Madam Fatal then clashed with the Black Witch, who could entrance servants with drugs and searched for eternal life. But who’s too minor for even me to write up.

During Madam Fatal’s last few adventures, she gained the support of “Tubby” White and “Scrappy” Nelson. These were the usual plucky newsboys sidekicks.

They met after Scrappy was kidnapped by his step-uncle Mycroft, who wanted to be the one to inherit the fortune ceded to Scrappy. Nelson and White apparently never learned that Fatal was Stanton.

The boys unofficially founded a fly-by-night PI outfit, the Sure-Fire Detective Agency. It was headquartered in a vacant lot. Their friend Stanton helped them as Madam Fatal and, true to form, their first case was to defeat foreign spies trying to acquire confidential documents. During this case Madam Fatal took a bullet in the shoulder. But the surgeon who operated Stanton covered for him.

Scrappy was then kidnapped by a spy ring (gosh !). But of course Madam Fatal and Tubby freed him and together they defeated the Germans.

Stanton is reportedly gaunt, though that wasn’t apparent in most art.

Madam Fatal appears to be a very sweet and empathic little old lady, and is obviously harmless. She loves to chat with everybody and have tea with the neighbours. Those with passing familiarity with her assume that she is slightly senile due to her inane chatter and relentless sweetness.

She’s actually an expert intelligence gatherer. Her legwork skills lie above those of the majority of police detectives thanks to her deceptive approach.

Stanton is of course a patriotic, two-fisted idle rich type who just happens upon nefarious situations and sets them right. He seems to be known among proper social circles as a troubleshooter and investigator.

Early on his Madam Fatal ID is not a genuine secret. Revealing it to allies is routinely done. This changes in the last few episodes, perhaps because Fatal has become somewhat famous.

Racketed neighbour: “But, Madam Fatal, your *strength* ! You knocked those crooks out with one blow !”
Madam Fatal: “Tut-tut, my dear — it’s that morning radio program. They give such wonderful setting-up exercises ! We’ll, I’ll be getting along, Sarah !”

Madam Fatal: “There’s no time to notify Army officials… I must do this job myself… but as Madam Fatal !”

“Right – and I too am looking ahead for some action ! I feel swell !”

(Unmasking the bad guy) “Philip White, the plane manufacturer ! You know what happens to traitors !”

Madam Fatal was a Quality character like, say, the Black Condor, Uncle Sam and the Human Bomb. Thus his most likely continuity path is that he existed on Earth-2 before the Crisis, then got retconned  into always having existed on New Earth – the post-Crisis unified continuity. This was the path chosen by Roy Thomas in the 1980s when featuring Quality characters in All-Star Squadron.

Before the 1980s Quality characters were strongly associated with Earth-X, a parallel Earth where the Nazis won World War Two. Thomas clarified that these characters had emigrated from Earth-2 to fight the Earth-X Nazis, but were still on Earth-2 during World War Two.

Madam Fatal could have easily existed on either Earth-2 or Earth-X. Her last chronicled adventures takes place in 1942 – just before the divergence point that leads to Nazi victory on Earth-X.

Post-Crisis on Infinite Earths, Stanton’s tombstone is briefly spotted on New Earth. So Madam Fatal presumably was active in the 1940s of the post-Crisis DC Universe.

Post-Flashpoint, a significantly different version of Madam Fatal was spotted in 1944.

The Madam Fatal disguise is quite convincing, and the vast majority of people are not very good at hitting little old ladies – or at expecting superior melee attacks from them. The main effects are :

Near the end of the series Madam Fatal is better known and feared throughout the underworld. However, it is still common for Stanton to enjoy these advantages, especially against lowbrow thugs who don’t know much about anything.

* Without Defensive Roll
**With his Convincing Acting Power 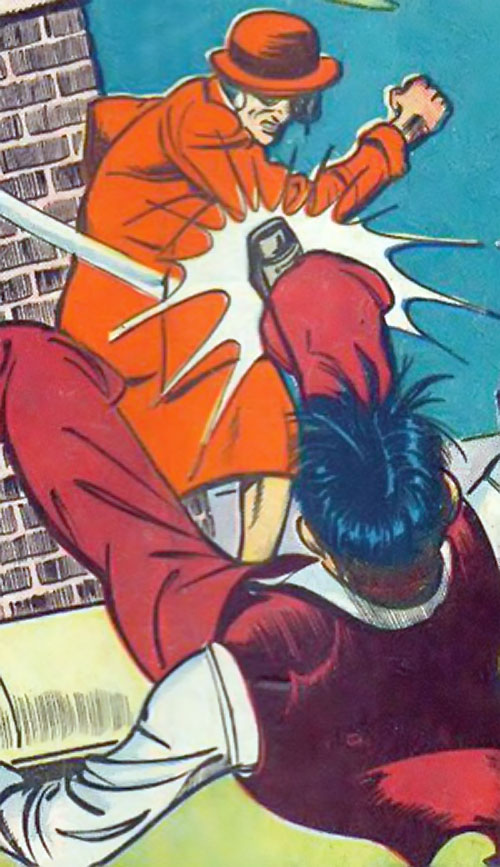 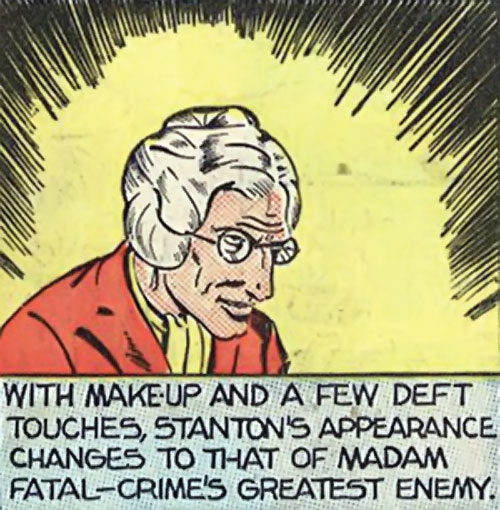 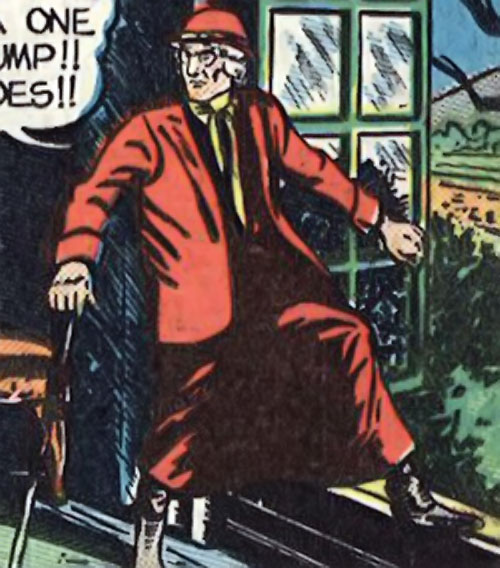 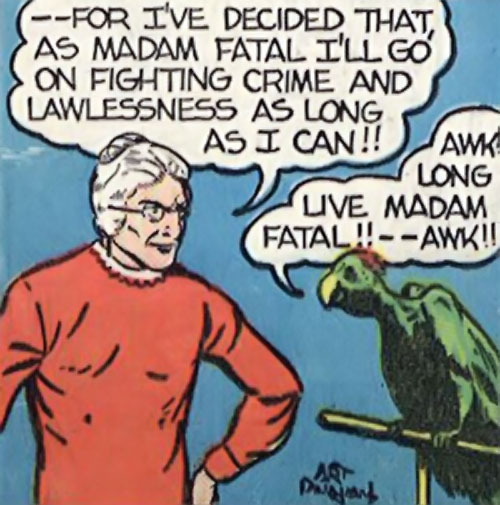 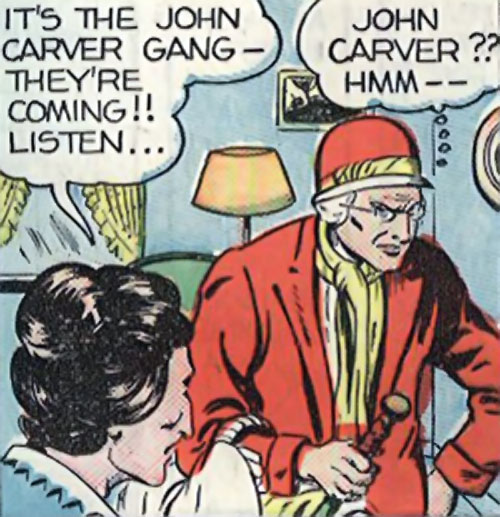 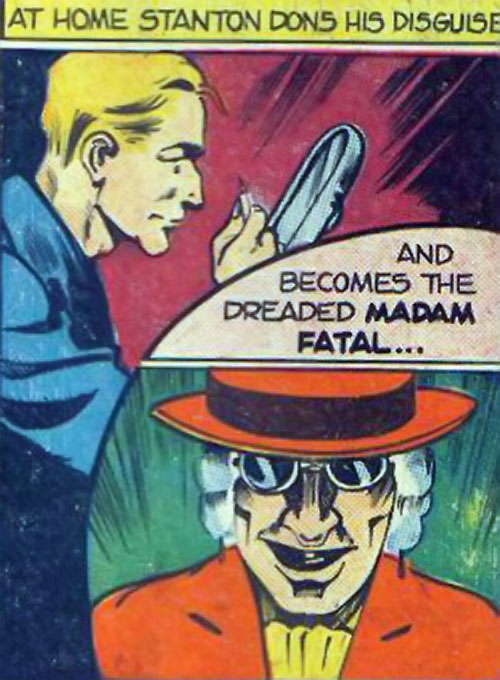 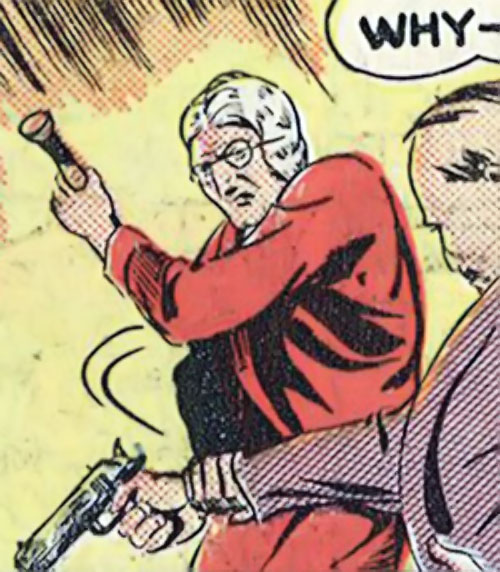 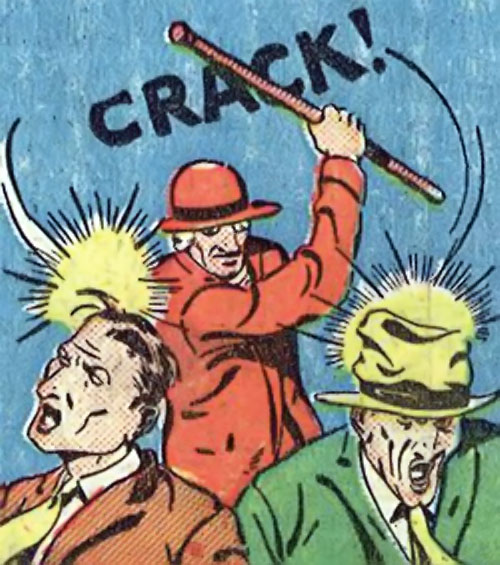 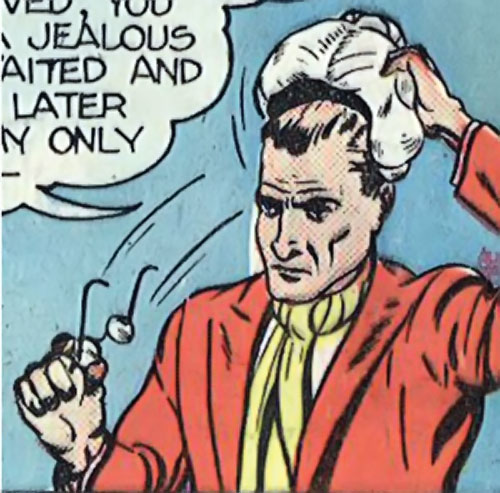 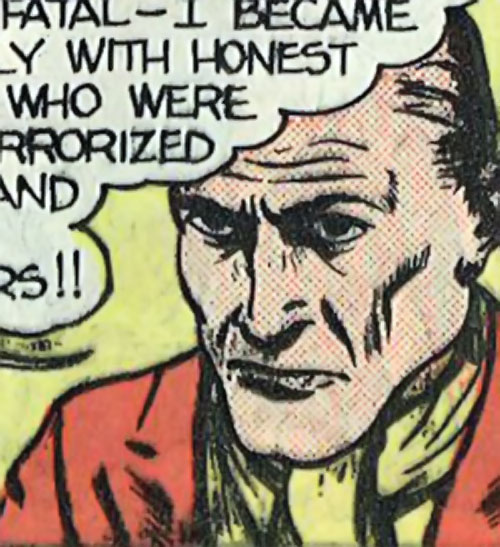 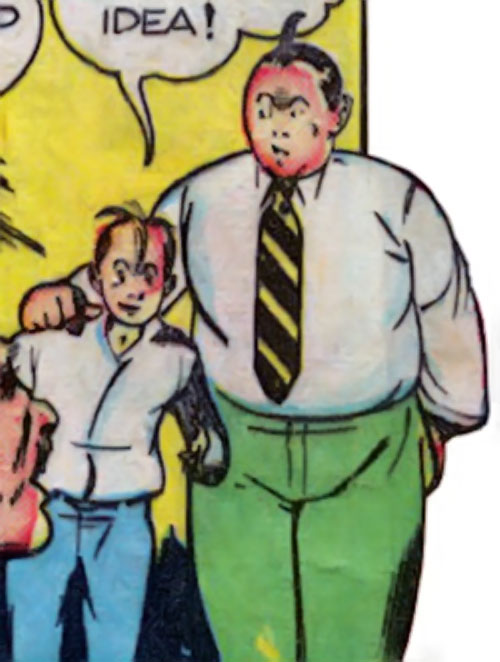 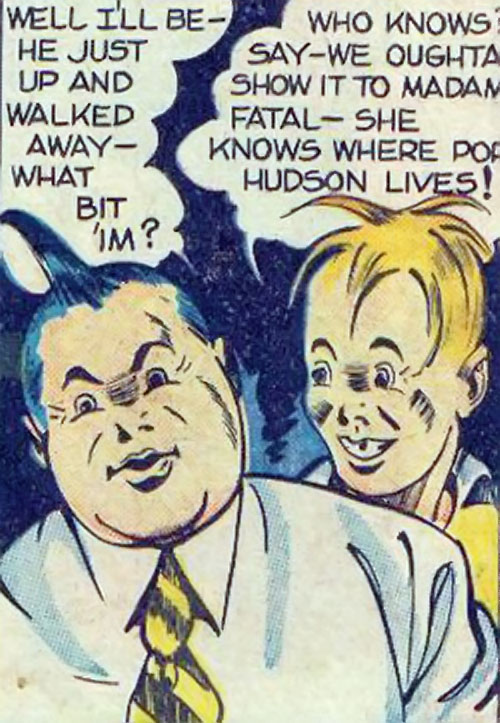 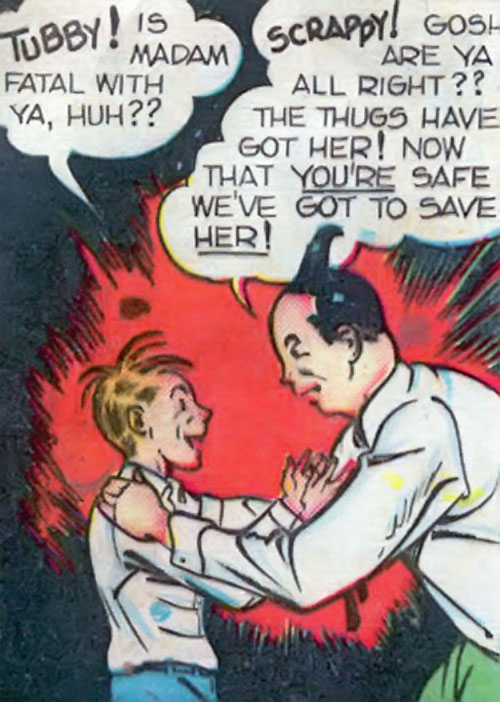