This profile is intended to be read *after* the Future Man character profile, to avoid a redundancy of redundant information.

Madame Death is a pragmatic, cold-blooded killer and criminal. She ran her own mob in the US.

She seemed smart, collected and efficient. She was difficult to intimidate, in good shape, and could flawlessly run in high heels (even over snow !). She also seemed to be an experienced equestrienne.

Madame Death is usually escorted by a half-dozen mobsters with .45 handguns.

She’s not usually armed, but Future Man once loaned her a futuristic raygun. Like Future Man’s psionic  bolts, this weapon couldn’t harm the Torch and Toro due to their flame.

If you make sure you’re connected…

Madame Death was impossibly well-connected in the underworld. Anywhere on Earth, she could obtain allies, information, mercenaries, supplies, etc. from local organised crime within days. If not hours.

This was a conceit to make the story move briskly. It was similar to, say, how the All-Winners kept stumbling upon Future Man’s plots whilst “patrolling” entire continents or oceans.

But here we’re going to interpret it literally. In our game stats, Madame Death actually has a global range of fast-activating contacts, is a polyglot, and can snap her fingers to get resources. That makes her more interesting.

This approach also allows for using Madame Death as a criminal mastermind in stories set in the 1940s (and perhaps the 1930s). Mobsters serving as opponents usually were generic and throwaway. The exceptions, such as the Monster or the Hand, tended to have powers.

So there’s room for Madame Death in this role. Perhaps she’d resemble the Tigress.

… the writing’s on the wall

Since this is a 1940 story, respectable men will not attack Madame Death. They can’t strike a woman. This is almost 100% reliable if she explicitly dares them to strike a lady, and wears upper-class clothing.

But of course, All-Winners member Miss America (Madeline Joyce) has no such taboo.

Back when writeups.org was a site for geekery experts I would have assumed this stuff to be known. But since over the years we’ve gained enough experience to address more readers, let’s explain :

Howbeit comic books history enthusiasts, such as Roy Thomas, gradually brought back elements from Atlas Comics. At first it was mostly reusing concepts and making allusions, but gradually events depicted in Atlas books percolated into the Marvel Universe.

A deal with Americas

Which raised the question. If the events chronicled by Atlas Comics were more or less, sort of part of the Marvel Universe, then who was the Captain America seen between 1945 and the “Marvel Age” ? Steve Rogers’ 1945 fall into icy water, and subsequent suspended animation, had already become a pivotal and firmly established date in the Marvel Universe.

In 1972, writer Steve Englehart  established that other men had attempted to replace Captain America and Bucky. These were the ones seen in the 1946+ Captain America stories, which often were anti-Communist propaganda.

This is what led to “Steve Rogers” (born William Burnside) aka Captain America aka the Grand Director, and Jack Monroe aka Bucky aka Nomad. Doctor Faustus would use them as weapons against Steve Rogers.

Such retroactive changes in stories are called retcons . As always, you can click on the   icon for a link to our glossary of technical terms and jargon.

Madame Death’s second appearance hinges on this notion, of men having secretly replaced Steve Rogers as Captain America after he went MIA.

Another — necessary — layer of narrative distance is that the Atlas stories were the product of unreliable narrators, or outright deceptions. For instance, the whole Yellow Claw business was retconned as having been a decoy from a secret conspiracy, the Atlas Foundation.

The adventures of the All-Winners Squad, as chronicled by Atlas Comics, are also established as having been laden with lurid exaggeration by the press. These deformations were encouraged by the PR-savvy Miss America. She also managed the Squad’s licensing relationship with the in-universe version of Atlas Comics.

In 1946, Madame Death was a notorious criminal with her own gang. During a meeting with her lieutenants, she was accosted by the sinister Future Man. After he demonstrated that he could kill with a glance, Madame Death agreed to work with him.

Though the Future Man’s plan was global genocide, there were vague promises that some XXth people would be left alive. Madame Death would allegedly get to rule over them.

Madame Death was instrumental in helping Future Man deal with XXth realities. Her global criminal contacts are what enabled the groundwork for Future Man’s plans. Yet these were all foiled by the All-Winners Squad. However, during these encounters Future Man made sure that Madame Death could escape.

Madame Death was still at Future Man’s side when the time ship was sent uncontrollably into the past.

Between this exile and his death, Madame Death and Future Man had a relationship. Losing her lover hit Madame Death hard, and she decided to die avenging him. Even if the avenging part didn’t work out, she thought that they’d be reunited in the afterlife.

Using Future Man’s technology, she returned to 1946, one week after Future Man’s defeat. Using androids, she plunged the All-Winners in a nightmare scenario in Time Square. American soldiers who had died during WWII were returning as the undead. Among their number were Captain America (Steve Rogers) and Bucky.

(Madame Death was aware that the originals had gone missing, and had been covertly replaced by successors, thanks to data from Future Man’s era. Since this fact was highly classified, this added credibility to her play.)

As they explained it, having the new Captain America (Jeff Mace) and Bucky (Fred Davies) sacrifice themselves would finish opening the gates to the afterworld. The original Cap and Bucky would thus be able to return among the living.

This very nearly worked, as the plan was leveraging Mace’s guilt about being but a shadow of Steve Rogers. But at the last second, Toro (Thomas Raymond) spotted an invisible presence using infravision. Thus, he exposed Madame Death.

When the Torch (Jim Hammond) hit the platform bearing Madame Death’s gear, it turned out to be a shrapnel bomb. Thanks to their powers, the All-Winners survived the blast. But Madame Death, as she intended, was killed in the explosion.

The words of Madame Death give the impression that, from her point of view, there was relatively little time between Future Man’s death and her revenge against the All-Winners. However :

It is thus credible that she made several stops along the timeline , representing a few months of her subjective present .

At the very least she ran surveillance on Jeffrey Mace in 1945/46 to assess how uneasy he was with filling Captain America’s boots.

She’s almost always dressed in bright reds. As we all know – see line woman, dressed in red, make a man lose his head (video) . I bet she’s a commie, too.

Two characters once call Madame Death a “dragon lady”, which was a common racist slur back then. She doesn’t look Asian in the art, but it would be weird to call her that otherwise. Three hypotheses :

A typical 1940s evil baddie. Madame Death doesn’t care about anyone but herself, and about anything but getting rich. The genocide of billions was just a vague fact to her, as was Future Man murdering one of her lieutenants. That makes her particularly pragmatic.

She had something of a face turn with her relationship with Future Man, but everything happened off-panel . By the time, she actually reappears, she’s consumed by her revenge/suicide plot as she doesn’t want to live without Future Man.

When she comes back from prehistory, Madame Death has acquired :

She can also build and program androids (prolly synthesoids ), albeit these didn’t have superhuman abilities. When performing complex actions (such as speaking lines that hadn’t been recorded in advance), they had to do so under direct remote control from Madame Death.

I almost wrote up the “you wouldn’t strike a lady” thing as a tongue-in-cheek Force Shield, but let’s not. 🙂

Check the Human Strength article for more about her STR score. 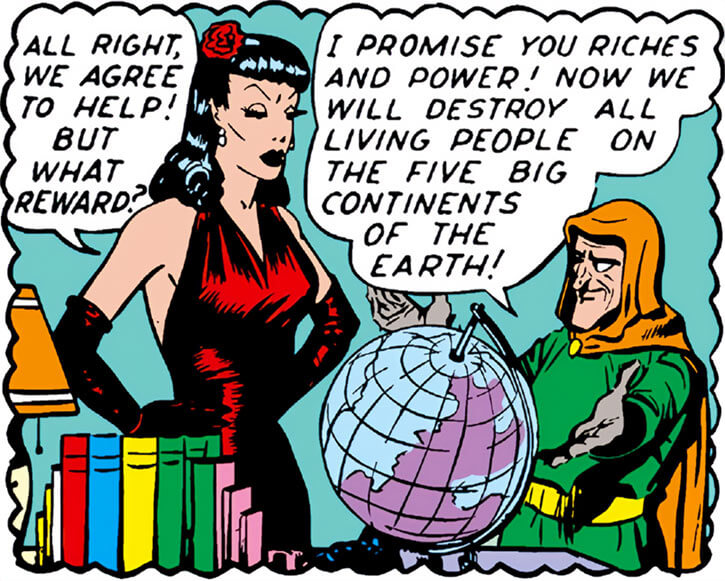 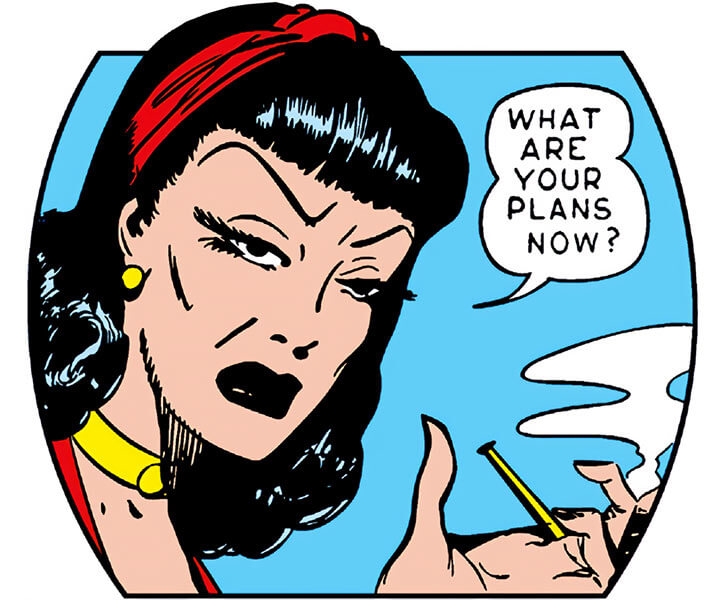