Madame Libertine can spray a small aerosol from her gloves. This compound lifts the moral restraints and inhibitions from those exposed to it. The spray is discreet, so it looks like Libertine has short-ranged psychic powers when she uses it.

Effects of the aerosol

An affected target first experiences a painful buzz in their mind, leaving them confused and helpless.

Krieger will then tell them to let go of their restraints, and the target will normally comply. Once they do the paralysis disappear and the subject will earnestly pursue a course of action he normally would refuse to engage in.

The whole sequence takes but seconds.

Typical endeavours Madame Libertine can trigger include looting and pillaging, engaging in brawls and rioting, or going after a hated enemy to murder them. Hitting random passers-by with this effect in quick succession can soon create considerable chaos.

Even such strong targets as the Marvels will be affected, though they can probably harness their resolve and break the effect before it’s too late.

Madame Libertine cannot predict what an exposed person will do. It depends upon what is on their mind at that moment. They might even turn against her. She can attempt suggestions, but it’s far from reliable.

This gas might be part of the Captain Nazi treatment (to make Nazi ruthless). Or perhaps it is derived from the Waters of Ruthlessness once used by the Ultra-Humanite.

The game stats assume that it works exactly like the fly gas for prior versions of Captain Nazi. If so the effect last for one hour, though it can be renewed using the inhaler. This is just a guess though – the gas is not demonstrated in the material.

Katrina seems to have enhanced strength and durability. There too it might be reused Captain Nazi technology – for instance small quantities of “miracle food” that she ate since her birth.

Katrina Krieger is the grand-daughter of Captain Nazi’s brother.

It seems likely that her grandfather Wolf emigrated to the US after the war, and that from then on they were ordinary German-Americans. However, Wolf also had a secret, which he shared with Katrina when she was but a little girl.

The old man was the caretaker of a suspended animation capsule hosting Captain Nazi (Albrecht Krieger). Katrina helped him with the maintenance and he indoctrinated her, convincing her that Nazis had been right and that his brother Albrecht was a King Arthur-like figure.

While stealing medical gasses, Libertine ran into Mary Marvel. Her gas spray convinced Mary to murder the then-powerless Black Adam, but the Marvel stopped herself in time.

In 1995, when Katrina was about 18, Captain Nazi finally got out of suspended animation. She tried to help her grand-uncle, but the outdated Nazi refused to listen to a mere girl even though she knew better. He was soon defeated by the Marvels. 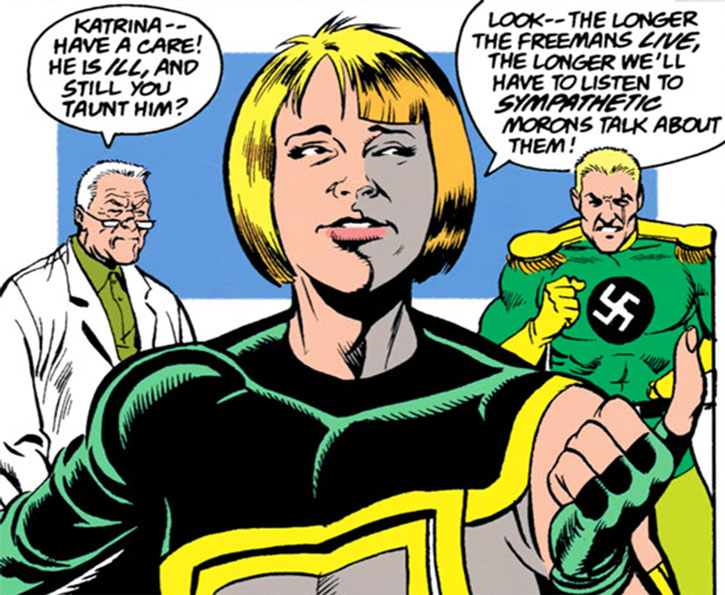 Katrina intervened to prevent his arrest, and gassed Mary Marvel again. But the now-uninhibited Mary just punched her with her full strength.

Madame Libertine hasn’t been seen since.

However, in 2008, a company of enhanced neo-Nazi stormtroopers briefly took control of Themyscira in the name of Captain Nazi and the Society. One lieutenant, named Tabitha, was oddly reminiscent of Katrina.

Though that was probably not the intent, it is amusing to imagine that they were the same person.

She is beefier and more broad-shouldered than the typical lissom comic book woman.

However, her grandfather tried too hard to inculcate her with hero worship toward Captain Nazi. The headstrong Katrina’s respect must be earned, and she’s tired of hearing about Captain Nazi since forever.

Libertine is smart, determined, mature, hateful and cruel. She certainly could make for a dangerous terrorist.

The neo-Nazi officer see, on Themyscira was determined to serve the stormtroopers’s cause, but was sceptical about some orders. She was openly opposed to burning down the libraries, considering that the knowledge of the Amazons was important loot and not something to be destroyed.

“People do the darndest things, when you suppress their moral restrains, don’t they ? Allow me to introduce myself — I am Madame Libertine. And as added insurance that you’ll remember me — here’s my business card.” (hits Mary Marvel with her chemical)

Madame L.: “You don’t care about me — I’m not your problem. Surely you have other matters to attend…”
Mary Marvel: “Yes ! I see it clearly — vengeance is what I want !” (flies off in a blind rage to kill Black Adam) 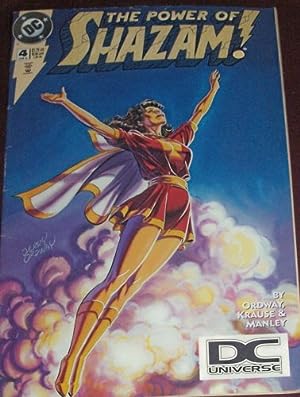 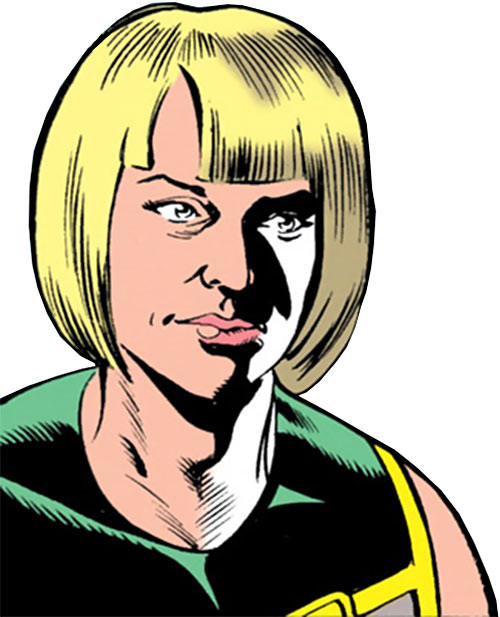 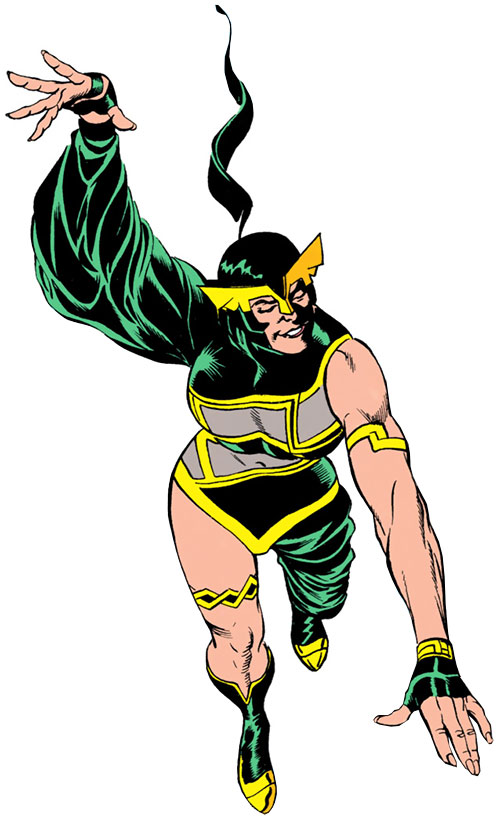 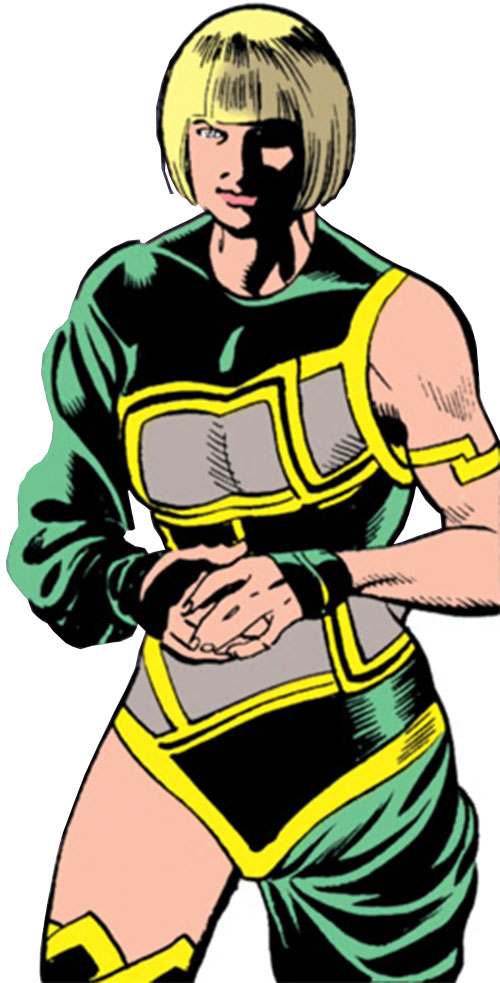 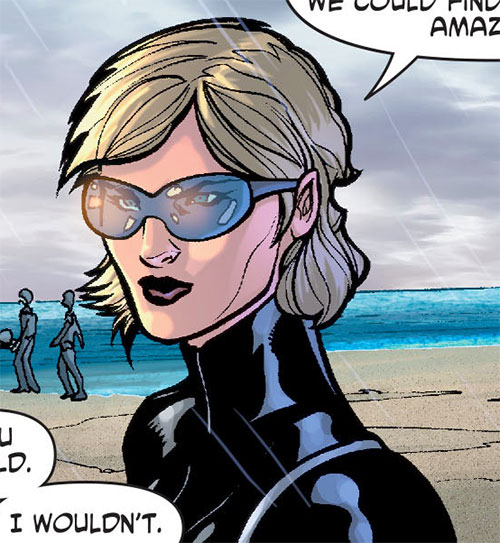 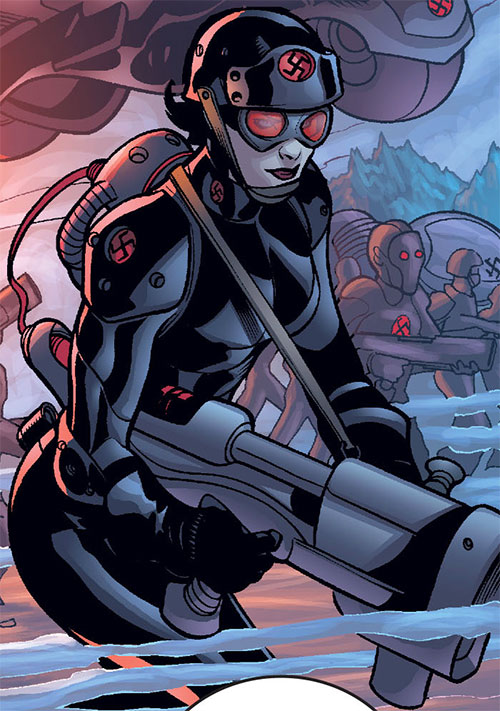 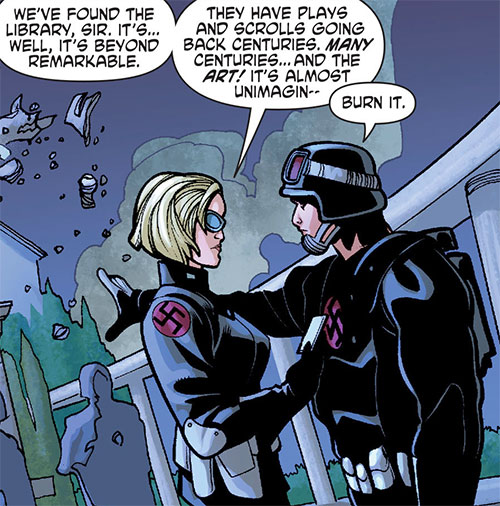