Dr. Ovarni is an… unconventional researcher in biology. She has perfected a unique form of cloning. Using small amounts of genetic material, she can grow a full double of the person.

How she does that is a mystery for the ages.

The process is fairly lengthy and involved, though. The clone is force-grown, but it will still takes month for it to reach adulthood. Once grown, the clone does not have access to their memories.

All alone in the moonlight

Ovarni’s usual procedure is to have the subject read and watch material about their life (or subjects closely related to it) in order to jog memories. It apparently takes several weeks for full memories and faculties to be available to the subject.

Furthermore, being exposed to the flood of memories from an entire life within weeks may be damaging. Especially for unstable subjects who have seen or done unsettling things. At least one subject has been driven to suicide due to this.

Dr. Ovarni usually prefers to work on deceased subjects. So, for all intents and purposes, she brings deceased people back to life. She might conceivably be behind a lot of unexplained resurrections in the DCU.

Dr. Ovarni is a rogue scientist from an unrevealed country (possibly Germany). Being sterile, she grew obsessed with finding ways of creating life through more artificial means, and ended making some unique breakthroughs in cloning.

Dr. Ovarni was in Markovia during the first attempt at regime change by Baron Bedlam, perhaps because of an interest in the work of Markovian genius Dr. Helga Jace.

After the coup failed and Baron Bedlam was lynched, Ovarni decided to take a sample of Bedlam’s corpse and regrow a clone of him, perhaps assuming he was wealthy and unprincipled enough to sponsor her research. 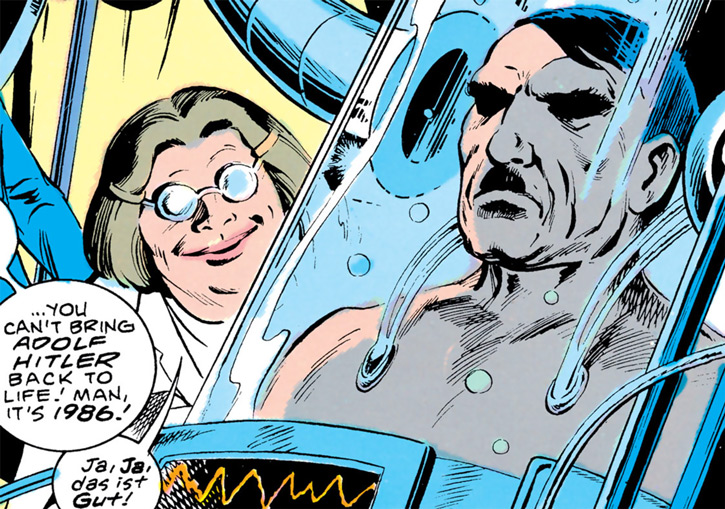 If so, she assumed right — Bedlam made her an instrumental part in his next plan and put his corporate resources behind her.

As a pun about Flaubert’s masterpiece , and as a reference to Ovarni’s obsession with creating life to compensate for her barren womb, Bedlam semi-cleverly nicknamed her “Madame Ovary”.

During her work with Bedlam, Ovarni met the Bad Samaritan, who apparently remained a contact of hers.

Go for the Godwin !

In time, Ovarni was given genetic samples of Adolf Hitler, and proceeded to grow a clone of the Führer, who started slowly regaining his memories. This clone was chiefly intended as a key, in order to open a secret Nazi cache which could easily be opened with Hitler’s palm print.

However, both Bedlam and Ovarni seemed fascinated with having their own copy of Hitler. The clone, still unable to speak and very confused, did open the cache for Bedlam to grab the super-weapon inside. However, within days, it committed suicide upon discovering whom he was.

The plot was derailed and Bedlam killed (again), though what happened to Ovarni at that point is unclear. Some have postulated that the Bad Samaritan smuggled her out of the country.

A small gene genie snuck off to the city

Madame Ovary was seen years later, working for a man called The Agent. The Agent had forcibly recruited a number of people who had become metahumans after the detonation of the Gene Bomb, and forced them to act as supervillains.

Ovarni was one-half of the scientific research team (along with a woman of unrevealed identity), working on the unstable or not fully emerged cases so that everyone could use their powers. The Bad Samaritan was also part of the hired help. The Agent’s operation was eventually brought down by the Justice League.

What happened to Madame Ovary at that point is unrevealed.

Matronly, dedicated scientist who was too busy to go at the scruples distribution.

She’s journeyman-like, dislikes interruptions in her work – and is not afraid of getting physically violent (though she’ll mostly likely strike from behind, given her modest combat abilities).

She seems to have an interest in the career of evil, charismatic men such as Hitler or Baron Bedlam – in fact she might even be called of fangirl when it comes to those.

Madame Ovary had more common sense than her sponsor Bedlam.

“Vell. Ve shall haff to vork on zat.”

Equipment:
Will usually operate a Lab. 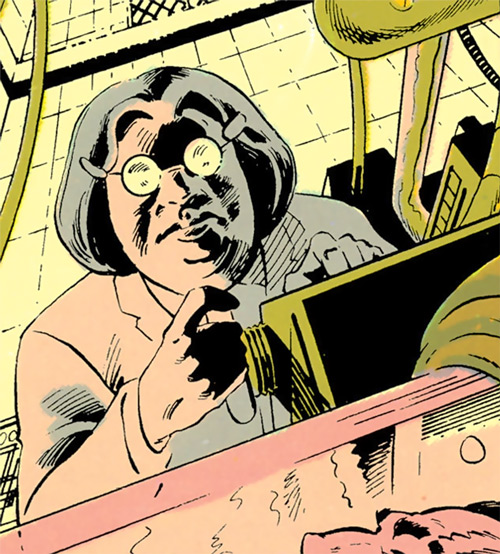 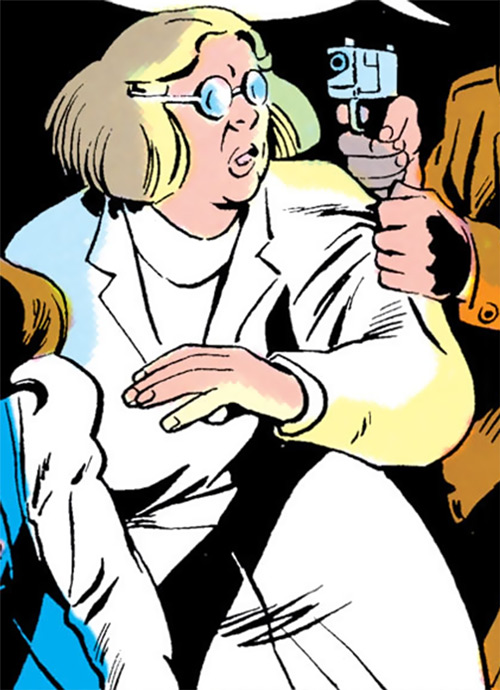 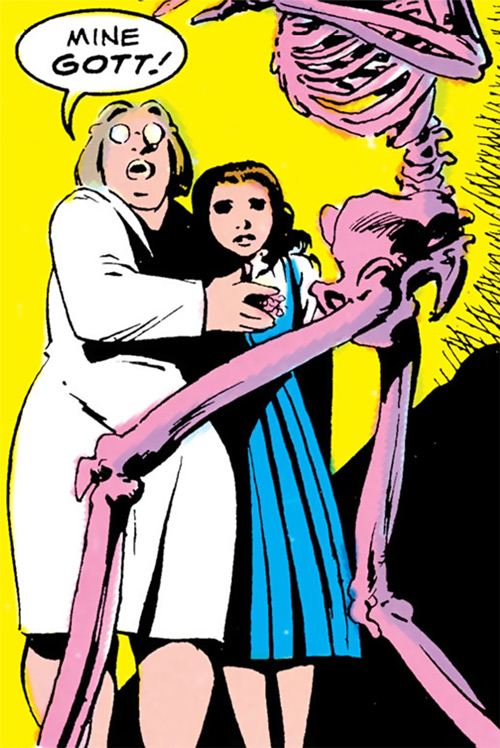