This obscure Deadman character appeared in two storylines written by Mike Baron, in 1988 and 1992. Both were mostly illustrated by Kelley Jones.

Ms. Waxahachie is an intelligent, experienced woman. She has a good grasp of human behaviour (including children’s), superior calm under pressure, and a certain authority.

Madame Waxahachie knows a fair bit about the occult, and in particular vodun traditions. Her knowledge seems to extend to both modern vodun syncretisms, and back to Fongbé  and Yoruba  mythologies.

This knowledge and experience mean that she remains calm when facing horrific menaces such as zombies and ghosts. As she pointed out, these are much easier to handle if one doesn’t panic.

She also receives visions and portents, both in dreams and whilst lucid. These will often alert her to threats. She can conduct various other rituals, and owns various gris-gris  serving as countermeasures against specific kinds of supernaturals.

Madame Waxahachie is too overweight to be much of a physical threat. On the other hand, she knows how to put her mass behind an unexpected attack when that counts. And her killer instinct is good enough to stab people without hesitation.

She also has a good reputation as a medium. In the DCU a non-trivial number of medical experts know that the supernatural exist in some form. And Madame Waxahachie is the sort of expert they might call in in germane cases.

Mabel Waxahachie uses numerology, folk mythology and astrology more frequently than more powerful mystics do. Perhaps these are easier but less efficient, and more easily defeated, forms of clairvoyance. Since magic is symbolism, I guess that symbols used by the poor and working class would be less powerful than those used by rich star surgeons.

At one gate of Hell, Mabel could turn her faith and resolve into a weapon – apparently an old, large revolver. But this was solely possible due to the place’s properties, and after watching the Phantom Stranger do the same.

Madame Waxahachie uses a lot of *very* minor magical items for protection. One gets the impression that she builds and enchants them herself. In rough order of appearance :

Mabel Waxahachie was born in 1959. Her mother Lou (whose full name we assume was Louise) worked as a live-in servant at the Peckshaw property.

(“Waxahachie” likely is a thoroughly butchered word in an unspecified Native American language, *perhaps* Wichita. It became the name of a town in Texas. If it indeed comes from the Wichita, it may be a mispronunciation of words meaning “the fat wildcat”).

(As an African-American in New Orleans, it is highly likely that Madame Waxahachie has some level of Native ancestry. She might in fact be Native. For instance, many darker-skinned Choctaw  folks historically passed themselves for Black to better withstand prejudice.)

In 1971, the teenage Peckshaw twin daughters attempted a zombie takeover of New Orleans. This was foiled, and the Peckshaw family was slain in the commotion. The twins killed themselves using cyanide, but they intended to come back.

(Who opposed the zombie takeover is unspecified. The Phantom Stranger, perhaps ? Or Doctor Occult ?)

I’ve got my mojo workin’

Madame Waxahachie appears to have been derailing minor malevolent mystical menaces for years if not decades. She operates in New Orleans, but has contacts throughout the US and perhaps beyond.

It would appear that in the DC Universe, voodoo works well enough that even minor bokors  can create trouble. Which will probably involve zombies – albeit weak ones, well beneath what the likes of the Black Talon can animate.

Such blackguards are below super-hero fare, and Madame Waxahachie keeps them suppressed. So things in the Big Easy are significantly less macabre than they’d be without her.

Madame Waxahachie operates a daycare center not far from the Mississippi banks. It doesn’t seem huge – perhaps a score of children. It seems to only do pre-K , and perhaps K. The building looks sinister, but the interior is nice enough and the staff seems caring.

The first seems a smidgen more likely, since her day school doesn’t have extraordinary security.

Madame Waxahachie mentioned a different background in 1992. The continuity between the 1988 story and the 1992 story seemed… weak. She said she had told fortunes and sold love potions all her life.

Our No-Prize Hypothesis  to reconcile these statements :

Again, this is just a No-Prize Hypothesis . And remember, you can click on the   symbol for jargon definitions.

The ghost came riding within the zombie cop

In 1988, a minor bokor named Wellman Legros launched a plot to take over New Orleans with a zombie army. He reviled Madame Waxahachie, who clearly had stopped previous schemes of his. 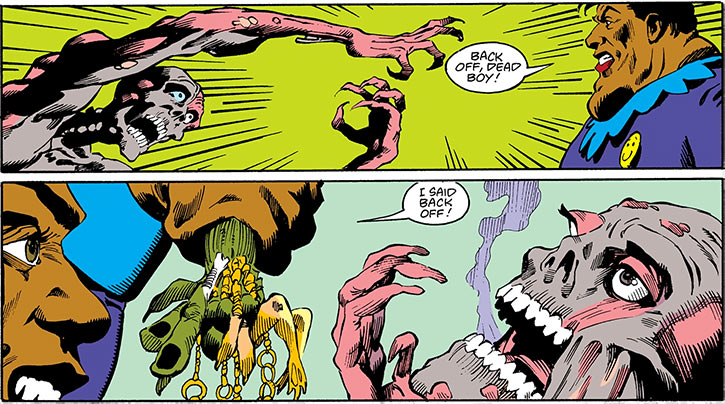 As part of his plot, Legros sent zombies to kidnap two little girls from Waxahachie’s school. These were perfect twins, and thus could make certain dark voodoo rituals much easier. However, one of the zombies had been hijacked by Deadman (Boston Brand). Brand and Waxahachie allied to recover the twins and defeat Legros.

Howbeit, the twins had already been possessed by the ghosts of the Peckshaw twins. While the teenage ghost witches weren’t competent, being true twins gave them a natural authority over weaker zombies. On the other hand, their youth and inexperience allowed Madame Waxahachie to play mind games with them.

As the ghost sisters were thus ineffectually flailing about, Deadman forced them to end their possession. The ghosts briefly possessed Mabel and her ally Luke instead, but Deadman outmanoeuvred them again. Now very low on power, the Peckshaw sisters had to possess rodents not to fade away.

In 1989, Deadman had a major nervous breakdown. For three years he hatefully wrecked the lives of random people, hung around a cursed church in Vermont wilderness, and went completely off the rails.

In 1992 Dr. Joanne Resnick, a Boston psychotherapist, requested Madame Waxahachie’s help. One of her therapy patients had been repeatedly possessed by Deadman. The New Orleans occultist determined what had happened, and found Deadman in Vermont. Though the ghost was paranoid and hostile, Madame Waxahachie was determined to restore his sanity.

During these events, Dr. Resnick’s patient was killed. Furthermore, Mabel and Joanne were captured by three hateful ghosts. These had possessed a trio of punks who were chilling out in the nearby forest.

However one of the ghosts, Roman centurion Lucian Coriolanus, disliked violence against women. He also considered Madame Waxahachie to be a soothsayer, and thus a holy woman. This led to a violent clash where he killed the body ridden by the second ghost, a rabidly misogynistic priest. 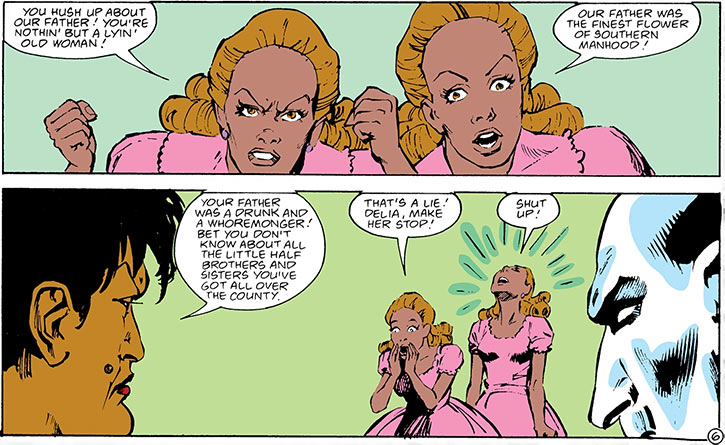 The Phantom Stranger then came in, helping everyone organise. The Stranger, Madame Waxahachie and the centurion went into the land of the dead. Their goal was to prevent the other two ghosts from doing major damage.

Meanwhile, Dr. Resnick started a crash psychotherapy with Deadman. Her goal was to have him face the horrors he had done, and why.

Madame Waxahachie, Centurion Coriolanus and the Stranger managed to hold ghosts and demons at bay for a while. Meanwhile Deadman was more or less brought to his senses. He closed the dimensional breach, which had been made possible by the four years of hatred and self-hatred he had soaked the place in.

Some time later Madame Waxahachie was seen in “Okeechobie”, which I’d assume is Lake Okeechobee . Though she might have moved to an isolated lakeside spot in Florida, it felt more like one of the story’s continuity errors. Or heh, perhaps she took over the abandoned Flammarion swamp cabin.

Centurion Coriolanus had been turned into an agent of Rama Kushna, just like Deadman. However, he first needed guidance about both the modern world and occultism. The officer chose to turn to Madame Waxahachie for such training, which she readily agreed to provide.

A voluminous African American lady in her late 30s. She’s usually dressed in provincial and conservative business clothing when working at her day care centre. Incongruously, her business suit sports a large, yellow smiley face button. This likely refers to the school’s logo, a happy clown face in bright yellow.

Her straightened hair is styled in the shape of an angry vampire bush rising to fight its sworn enemy, the spitting space cobra.

Her height is fairly variable from panel to panel, so I went for a murky average. Perhaps it’s a side effect of her haircut significantly increasing her height.

Madame Waxahachie has a New Orleans accent. But the speech bubbles don’t go out of their way to represent that, so it’s not a heavy one. Still, she’ll employ a few Southern and more local turns of phrase and pronunciations. Such as calling people “honeychile”, though that’s uncommon.

She smokes a few cigarettes (or occasionally cigars) a day. In stressful situations, she’ll smoke much more often. Unless she runs out because she was only carrying a half-pack.

Since I’m name-dropping Charley Patton in the next section…

Miz Mabel is smart, collected, authoritative and quite professional. She takes her responsibility to protect people seriously, and will never hesitate to take risks to do just that. She seems almost blasé when it comes to weaker, more common supernatural monsters.

She has a good rapport with children, but in a firm and no-nonsense way. She’s also good at psychology and seems to be a keen observer of human experience. Thus, she could manipulate the Peckshaw ghosts by playing on their racism, their dysfunctional family secrets and their sororal love for each other.

Ms. Waxahachie is clearly used to being in charge and giving orders. She’s also difficult to intimidate. While not immune to fear, she can walk into dangerous confrontations with no apparent nervousness.

However, she knows when she’s in above her head. She can handle horror movie stuff, not super-hero stuff with demons and the like.

Madame Waxahachie is a Christian (likely a Catholic since she’s from New Orleans).

She is well-versed in delta blues music, such as Robert Johnson  and (presumably) Charley Patton .

And she has extensive experience with staying unflappable in the face of racist insults.

(Calmly preventing a zombie from strangling her) “Panic’s what kills most… *gasp* zombie victims… The trick… is to break the fingers one by one.”

“You kids get away from that zombie ! It’s nothing for you to mess with !”

“You can put ’em at rest with decapitation and burning… But if you don’t and whatever force summoned them goes away, they just lay dormant…”

“17 is a base integer… if they had taken it as their secret number they would come back now. They were 17 when they died. 17 alive, 17 dead. It enhances the power they already possess as twins.”

“Hellacious images… an ancient portal is about to open. I have suffered nightmares… let me just say it isn’t exactly unexpected. Take me to your patient.”

“I expect a major confluence in two days. Venus will align with Mars. On Wall Street, it’s triple witching hour . Judy Garland will appear on three networks simultaneously. And my old Ford pick-up is about to turn 300,000 miles.”

“Joanne, listen, don’t talk. These people are not what they seem. Be calm. Show no fear.”

(As they enter an horribly organic dimension )
Phantom Stranger: “This entrance to Hell is like the gut of a dog…”
Madame Waxahachie (quietly amused): “What does that makes us ?”

Drawbacks:
MPR (Waxahachie is obese and a smoker – which affects her speed, endurance, etc.).

Equipment:
This is described above. Here’s the stuff for which we can hazard stats :

In 1988 she was driving a restored 1930s car. She later mentioned owning an old Ford pick-up.

Writeup completed on the 2nd of December, 2017. 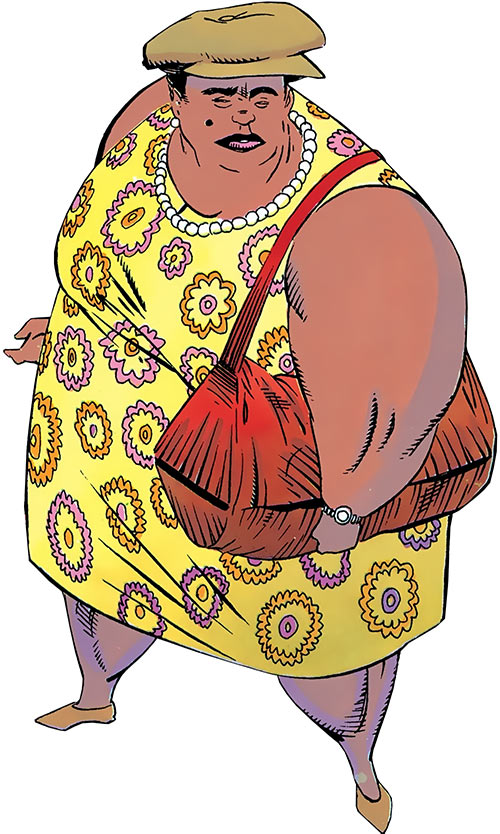 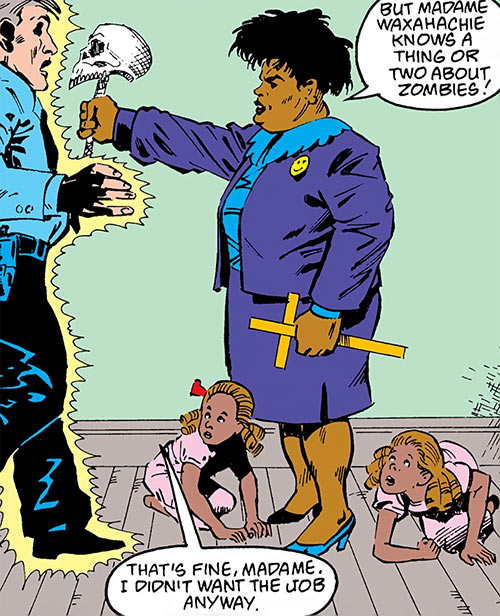 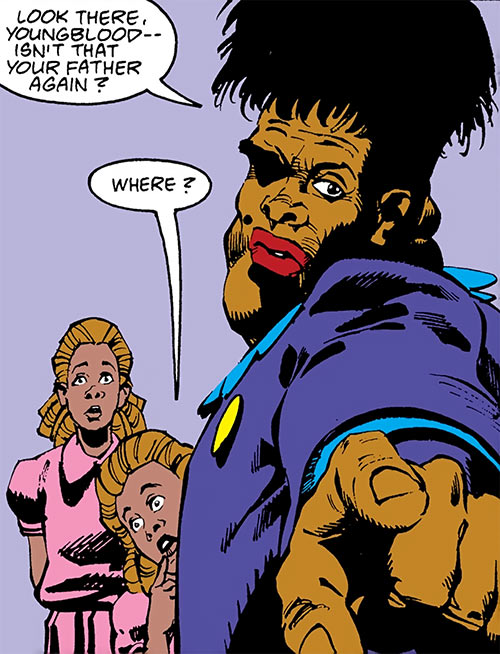