Jamie Madrox is a mutant capable of absorbing the force of a physical impact, which splits him into two exact duplicates. He can reabsorb the duplicates at any time they are near him, absorbing any memories and damage they may have gathered during their separation.

The Multiple Man has also learned to reabsorb them over short distance, rather than needing physical contact. He used to require physical contact with the duplicate to reabsorb them, but has recently learned to do it over short distances. Reabsorbing a duplicate that has been separate from him for any length of time can leave him temporarily weakened.

For a while he has been sending duplicates all over the world to learn different things, so has attained a wide knowledge of a number of areas. When in combat, he usually manoeuvres to make Team Attacks with himself.

Jamie Madrox was born a mutant with the ability to create duplicates of himself upon impact. Two weeks after he was born, his father, Doctor Daniel Madrox, resigned from the Los Alamos Nuclear Research Center. The family moved to Kansas at the suggestion of the X-Men’s founder, Professor Charles Xavier.

Living on an intentionally isolated farm, Jamie was given a special suit to wear that would neutralize his multiplication power. Before this could be explained to him, a freak tornado killed his parents when he was 15, leaving him an orphan.

When he was 21 years old, Jamie’s suit malfunctioned, shorting out every electrical appliance nearby. Alone and scared, Jamie felt driven to travel to New York where he clashed with the world-reknowned Fantastic Four. After the arrival of Professor X, Reed Richards managed to rewire the circuits on Jamie’s suit, neutralizing his power once more.

Professor X then took Jamie with him in the hope of teaching him to cope with his power.

Professor X invited Jamie to join the X-Men. But Madrox declined, opting instead to take a position as laboratory assistant to Moira MacTaggert at her genetic research station on Muir Island.

After failing to stop the villain known as Eric the Red rescuing Magneto from Muir Island, Madrox found himself the target of the reality-altering mutant known as Proteus. Proteus possessed the body of one of Madrox’s duplicates in order to escape. 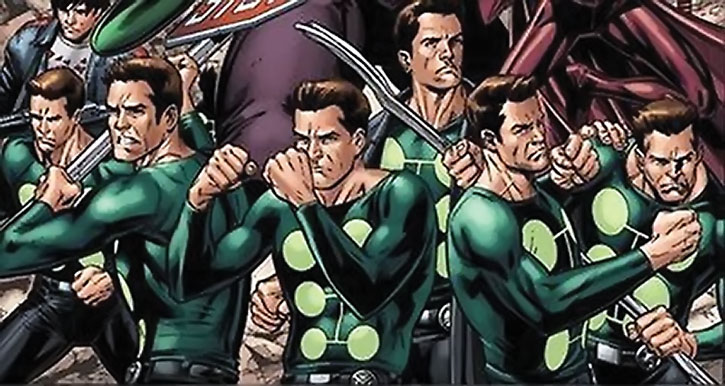 After the Proteus affair, one of Madrox’s duplicates joined the group of teenage heroes known as the Fallen Angels. He remained with them for a time to help reform some of the team’s criminal members. During this time, the duplicate had a romantic relationship with Theresa Rourke, a.k.a. Siryn.

After the Shadow King’s defeat, Madrox was offered a place in the government-sponsored X-Factor team, which he accepted. Unknown to Madrox, the duplicate that had joined the Fallen Angels years before had since found a place in Mr Sinister’s team of Nasty Boys.

With the help of Senator Stephen Shaffran, a mutant with the ability to turn other mutants’ powers and fears against them, the duplicate convinced the Nasty Boys, and Madrox himself, that he was the original.

Madrox merged with the duplicate, but it was a ruse. Thus, the original “disassembled” the duplicate from the inside and remained the dominant personality.

During a mission in Genosha where X-Factor had to track down an escaped mutate, one of Madrox’s duplicates contracted the Legacy Virus after giving mouth-to-mouth resuscitation to a dying mutate. When the duplicate was reabsorbed, it was believed that Madrox himself became infected.

When X-Factor encountered the woman known as Haven, she offered to cure Madrox of the Virus, but something went wrong and Madrox seemingly died.

X-Factor were later sent on a mission to apprehend a mysterious figure that was revealed to be Madrox, alive and well. Madrox had been recruited by elements of the U.S. government that wanted to turn him into a one-man-army. Seeing the changes that had occurred with X-Factor, such as Sabretooth and Mystique being members, was enough for Madrox to refuse Forge’s offer of rejoining the team.

After Sabretooth and Mystique escaped and Forge handed over leadership of the team to Havok, Madrox agreed to join the new, independent X-Factor team. After Havok’s apparent death, X-Factor disbanded and Madrox found himself in Genosha. He worked alongside Forge at the behest of Professor Xavier to monitor the situation there after Magneto’s rise to power.

Recently, Madrox was recruited by Banshee to join the militaristic organization known as the X-Corps. Madrox was employed to create duplicates to function as support staff, performing duties ranging from communications monitoring to gunship pilot. After X-Corps was disbanded he was recruited by Xavier into his X-Corporation, working at the Paris branch.

Even more all-new and all-different X-Factor

After a while he moved to the Mutant Town area of New York, where he opened up a detective agency. When one of his duplicates returned with a fatal stab wound, and he only managed to gain partial memories from reabsorbing him, Madrox followed the trail back to Chicago. The trail led him to Sheila Desoto, girlfriend of suspected organized crime boss Edward Vance.

He discovered that his duplicate had married Sheila, only to find out that she was also a mutant. She was using him in her attempt to become the underworld boss of Chicago by eliminating the existing ones.

His duplicate had been killed by her henchman Clay, who had duplication abilities similar to Madrox’s. Clay also claimed that he knew things about Madrox of which he was himself unaware. Madrox confronted them at Vance’s estate, where Vance killed Sheila and one of Clay.

He now runs X-Factor Investigations with Wolfsbane and Guido.

His isolated childhood has led to Madrox having trouble relating to other people, and feeling disconnected from the world. He has developed close friendships, particularly with Wolfsbane and Guido.  But while he is fairly sociable with other people, he tends to be guarded about developing strong bonds.

His duplicates usually do what he wants them to, and usually act the same as the original Jaime. But they can sometimes manifest one particular aspect of his personality very strongly, like caution, machismo, or adventurousness. It is usually whatever feeling he experienced strongly just before separation.

This aspect can increases in strength the longer the dupe remains apart from the original. The duplicate also becomes more independent the longer they’re separated.

There have been at least two occasions when duplicates have acted against his interests, to the point of nearly killing him.

The first was due to the powers of another mutant, who exacerbated the independence of one of his duplicates. The second occurred when he was thinking that maybe he deserved to die, and an impact created a duplicate that agreed with him, and tried to kill him.

A less extreme case is illustrated in the final quote below, where he’s considering why he constantly feels so disconnected from everything. Since he can take his life in all directions none of them feel any more important than the others, so what’s the point in doing anything. Jamie then creates the dupe who sees no point in doing anything.

“I’ll do it by myself. I take being murdered pretty personally.”

“Hey Forearm ! Is it true you’ve got a brother who can mentally operate toilets and he’s named Foreflusher ?”

(After Reaper loses a leg in a portal accident) “Oh, yuk. I knew we wanted to dismantle the MLF, but there has to be a more efficient way than piecemeal.”

“Hey, you notice I don’t pull jokes on Rahne. It’d be like mugging a smurf.”

“The woman’s name was Sheila. Sheila Desoto. She’s engaged to a major criminal type named Edward Vance… and she was on the mind of a dupe of mine who was stabbed nearly to death until I reabsorbed him. I’ve come all the way here to Chicago to learn why he was so preoccupied with her. Found her swimming naked. A quick search revealed no concealed weapons. She threw herself at me. Kissed me. Called me James. Felt nice. Felt adult. Felt ‘noir’.”

(After creating a duplicate on the other side of a door to a room he’s been locked in, with guards likely to return at any moment)
Duplicate: “What’s the point of letting you out? What’s the point of anything?”
Original: “Aw Lord.”
Duplicate: “You were thinking it yourself.”
Original: “Stay out of my head, would‘ja?”
Duplicate: “You’re kidding, right? You were thinking about how nothing matters. You were right. So really, why let you out of there? It doesn’t make any difference…”
Original: “Okay, okay, I was thinking that, but it was mixed in with all kinds of other stuff in my head. But then you pop out, and my luck, you’re just one aspect of what’s on my mind, and all you can think is that nothing matters. You’re just “distilled downside.” You don’t have any mitigating factors in your head.”
Duplicate: “What “mitigating” factors?”
Original: “Well, such as that the longer I’m stuck here, the more danger I’m in.”
Duplicate: “But if nothing matters, why does even your living make a difference? For that matter, how could we not have been ecstatic that Sheila was kissing us ? Are we gay ?”
Original: “Right now, I’m not even mildly jovial. Seriously, I’m not gay.”
Duplicate: “Why not? If nothing makes any difference….”
Original: “I never said that! ”
Duplicate: “But you thought it.”
Original: “There’s shadings, for crying out loud !” (and on it continues until the bad guys come back)…

Advantages:
Confined Headquarters; Expertise(Genetics); Language (Russian); Omni-Knowledge; Misc. (If his original body is killed he can pay 15HP and retcon it to be one of his duplicates).

He used to wear a costume which protected him from splitting due to everyday. COSTUME [BODY 04, Kinetic Absorption: 01; Bonus: Any impact absorbed entirely by Kinetic Absorption does not cause him to split (+1)]. 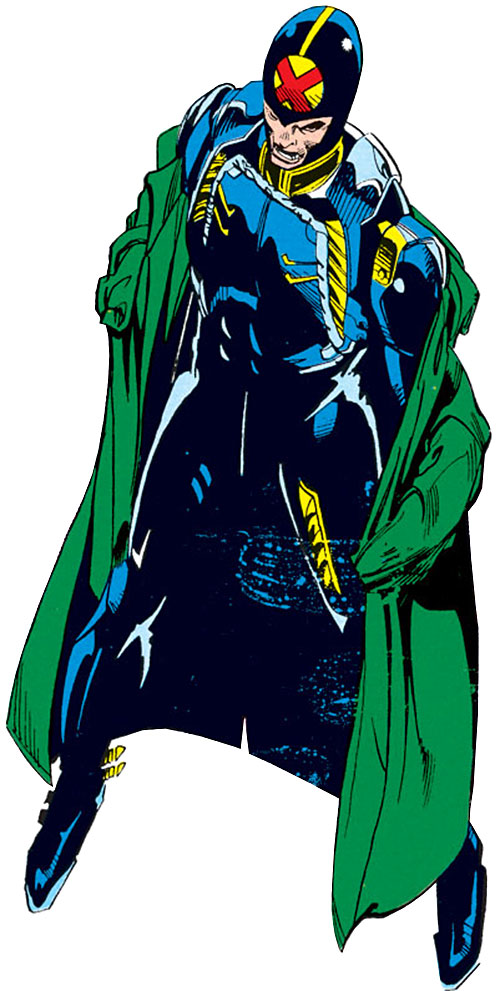 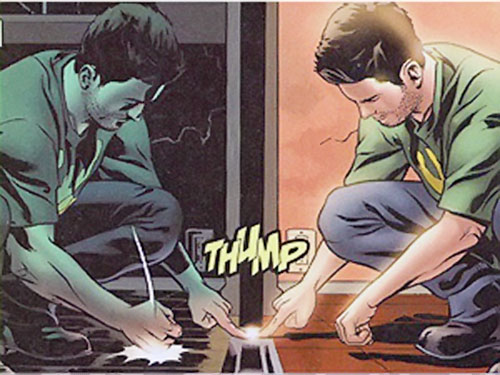