Magdalene is superhumanly strong, and an accomplished fighter, especially with her staff. She is capable of holding her own against Hercules in a fight.

She usually fights with her staff, a powerful weapon which can project beams of destructive energy over a distance. Magdalene can also burn any enemy who grabs hold of it, causing even Hercules great pain. It can also project a protective force shield over the wearer.

FInally, it can open a gateway (called a Slash/Way) to distant locations, and even other dimensions.

Magdalene is a native of an alternative reality. Her Earth fell victim to the madness of its Sersi. She was saved by Proctor, who claimed his reality had also been a victim of his Sersi. Proctor recruited her into his Gatherers, to hunt down and stop the Sersi’s of other dimensions before they did the same to their worlds.

Some travellers to alternate realities have trouble physically adapting to a dimension where a version of them already exists. As a result, they can be left disoriented and weakened. Proctor discovered the “Gathering” ritual as a way around this. It involves locating the traveller’s counterpart and killing them.

Life by the sword

Magdalene began a relationship with Proctor. This ended when the Swordsman was rescued from an alternate reality, and Magdalene fell in love with him. Proctor kept them on as Gatherers, but harboured a grudge against the pair.

The Swordsman of Earth-616  was long dead, and so the Swordsman could not be properly Gathered. He was left disoriented a lot of the time. Magdalene stuck close by his side, caring for him.

Proctor sent Magdalene and the Swordsman to attack the Avengers, whom the Swordsman blamed for abandoning him to die. But his disorientation worked against them, and they were forced to flee.

On another gathering trip, they Gatherers recovered the Coal Tiger. He was grievously wounded when they found him. As a result, he needed Gathering quickly to have a chance of surviving in the new dimension. Sensing that his counterpart was also an Avenger in this dimension, Proctor sent the Gatherers to Avengers mansion to access their computers.

The Gatherers had already infiltrated the Avengers mansion twice, undetected. But the Avengers had detected anomalies, and were prepared for them on this occasion. They fought briefly, but Cassandra managed to subdue the Avengers. The Gatherers escaped with the information about their new member’s counterpart, the Black Panther.

They travelled to Wakanda. But the Avengers had warned T’Challa about them. As the Gatherers attacked him, some of the recovered Avengers came in, transported by Lockjaw. While the battle raged, the Black Panther was subdued by the Gatherers, and Cassandra attempted to Gather him.

However, the ritual was disrupted, however, by the Coal Tiger. He refused to let another die in his place. He soon died, and the Gatherers fled. But the Swordsman was captured before he could get away.

Concerned for his well-being, Magdalene begged Proctor to let them rescue him. Proctor sent them to Gather the Vision from Swordsman’s dimension. Proctor said that he would send to rescue the Swordsman. When they returned with him, Proctor released Tabula, whom he sent with the other Gatherers to capture Earth-616’s Vision.

After swapping the minds of the two Visions, Proctor sent his Vision to infiltrate the Avengers. He also gave secret orders to execute the Swordsman, and keep the other Vision captive.

The Gatherers’ Vision failed in his attempt to kill the Swordsman, although he did seriously wound him. The Gatherer’s Vision was captured, and led the Avengers to Proctor’s citadel in the Andes. The Avengers stormed the citadel and battled the Gatherers, freeing their Vision.

When the other Vision revealed he had failed the mission Proctor had given him to kill the Swordsman, Magdalene turned against Proctor. She also killed the Gatherers’ Vision.

Proctor revealed to the Avengers that he was a previous Gann Josin of Sersi. He said that her increasing madness would be a threat to the world if she was allowed to live. Then Proctor activated the self-destruct mechanisms of his citadel, teleporting himself and Ute away, abandoning the Avengers and his Gatherers to the citadel’s destruction.

After surviving the citadels destruction, Magdalene surrendered to the Avengers. She was desperate to see the Swordsman. But before they could leave the area, the Avengers were attacked by Kree Sentries. Magdalene helped the team fight them.

While the Swordsman was recovering, Magdalene stayed constantly at his bedside. One exception was aiding the Avengers when the Kree Lethal Legion threatened to destroy Earth. When Philip emerged from his coma, they continued to stay with the Avengers for a while, even going on missions with them.

Then Magdalene again came into conflict with the Lethal Legion, while on a team investigating the loss of an Avengers tracking station.

They moved out of Avengers mansion when Tony Stark lent them a place to stay. But the couple still maintained contact with the Avengers, helping them in battle. When the Avengers disappeared during the Onslaught affair, they became more active, helping to fill the void left by the group’s absence.

Shortly after the heroes returned, they were attacked, as were all former Avengers, by mythological creatures. They answered a call to a gathering of all former Avengers. The couple was part of the team sent to recover a Norn Stone from the South Pacific, where they battled the Midgard Serpent.

The whole scenario had been a trap by Morgan le Fay. She captured the Scarlet Witch, and used her power to alter the world into a more medieval setting.

There, the Avengers were changed into the Queen’s Vengeance, her personal army. In this world Magdalene was Lady Magdalena. The Avengers were eventually freed of Morgan’s control, and restored the world to its normal state.

Shortly after, with the Avengers reformed, Magdalene and the Swordsman were offered reserve member status. But they declined, still feeling out of place in the world.

Later, Iron Man and Magdalene managed to restore her lance’s power to travel dimensions. The goal was to allow the Squadron Supreme to return to their own world. Magdalene and Swordsman decided to leave Earth-616 too, to try and find somewhere in the multiverse they could belong.

Proud and aggressive, Magdalene will never back down from a fight if she believes she’s right.

She can be blunt in making her thoughts known. She is trusting and completely loyal to her team mates, but can be a relentless foe, especially if her trust is broken. She is extremely protective of the Swordsman.

(Protecting Swordsman from Hercules) “Get away from him, you foul animal ! I will not let you hurt him ever again ! You, nor anyone else !”

“By the fourth ring. We barely made it through the Slash/Way !”

“Threaten me again, Olympian, and I swear, you’ll find yourself at the receiving end of my power lance !”

The Gathering would probably work better in the DC Universe, where it’s already established that travellers in Hypertime cannot survive on a world where a counterpart of them already exists.

When a member of the Gatherers, Magdalene’s staff was capable of Warping and Dimensional Travel. But she couldn’t use these when she turned against Proctor. In a later story, however, Tony Stark helped her restore the Dimensional Travel, and it was implied that she could still Warp.

So I’ve decided that these were either components of the staff before she met Proctor which she was unaware of, or were added by Proctor.

When she turned against him he turned these off, and she assumed that she could no longer use them. She later discovered that they were still possible, and she can, with some work use the Warp. The Dimensional Travel is only fixed when she leaves Earth-616, so she’s still getting use to it. 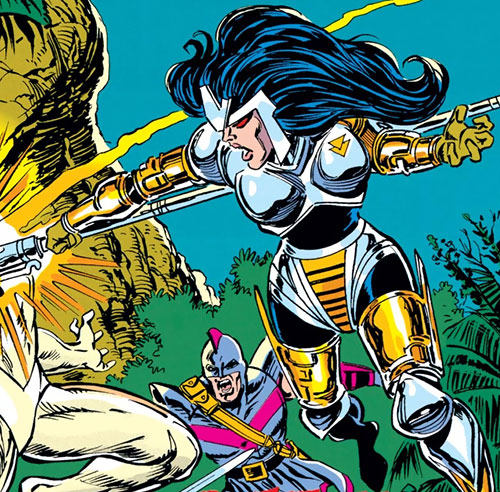 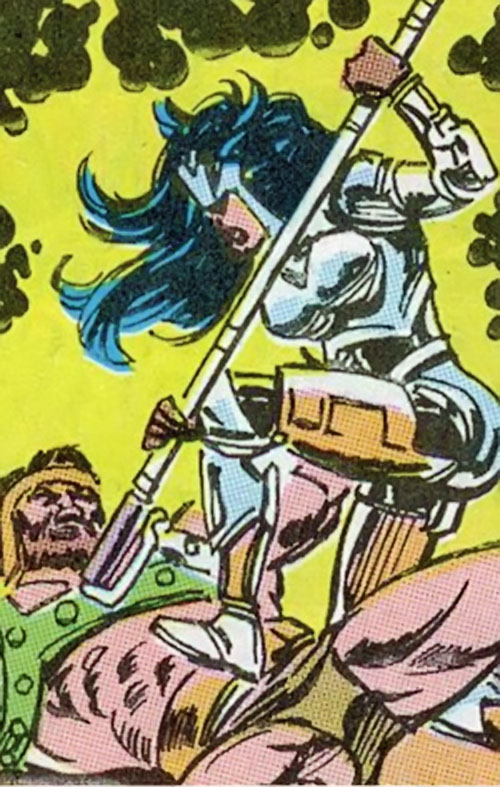 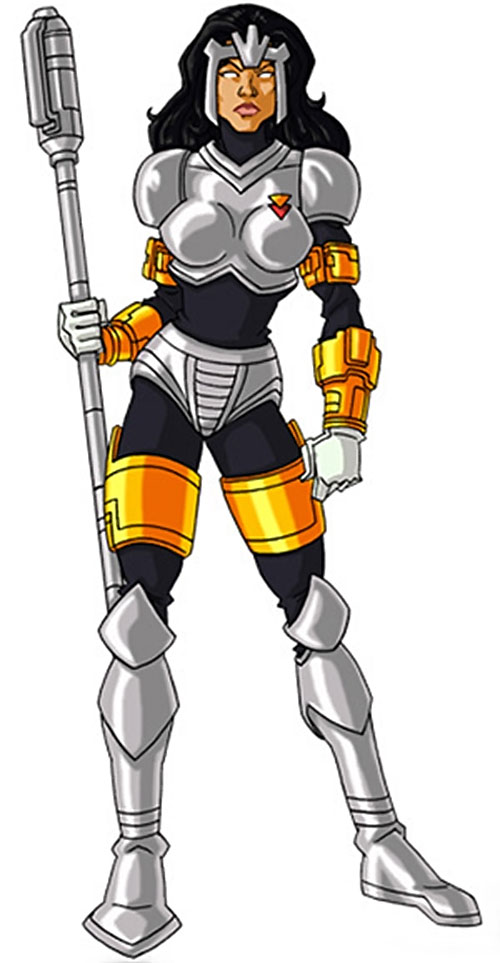 As a Queen’s Vengeance member : 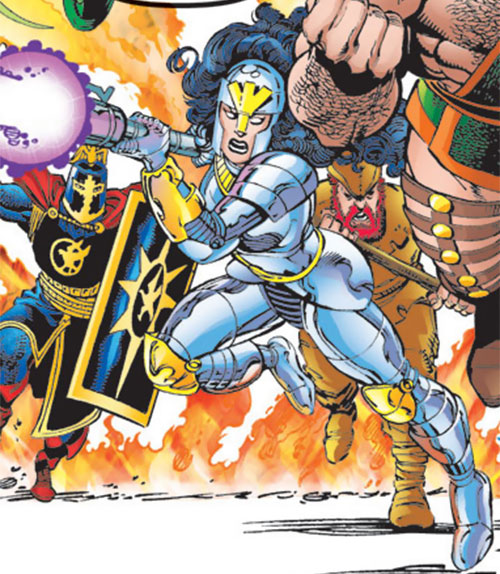