Kevin possesses vast superhuman strength; he can easily punch through concrete or lift objects the size of a sperm whale.

In Marvel Comics terms, he would be a “Class 50” character, roughly comparable to classic Rogue (Anna-Marie NLM).

In addition to his vast strength, the mystical energy that fuels Kevin’s powers grants him superhuman stamina and durability.

His body can resist: being run over by a subway train, a fall of over 20 stories and supernatural blows without suffering injury or being rendered unconscious.

Despite his utter lack of training, Kevin is a fair hand to hand combatant. Additionally, over the course of his adventures, Kevin has gained an almost encyclopedic knowledge of the occult and the denizens of Faerie.

Kevin wields an enchanted baseball bat which in actuality is the modern-day reincarnation of Excalibur. Excalibur is virtually indestructible, and when wielded by a being of Kevin’s raw strength, becomes a weapon of vast destructive potential. In Kevin’s hands, Excalibur cuts through stone or supernatural flesh with ease. 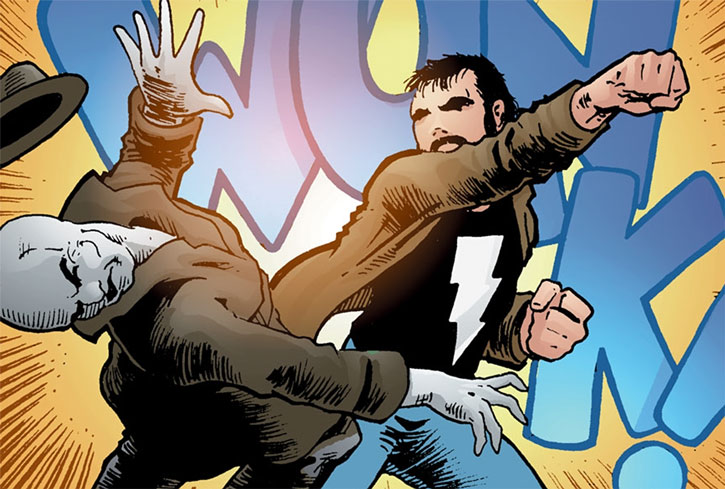 Besides being a nearly indestructible melee weapon, Excalibur is the “source” of Kevin’s supernatural might. So long as he is in the bat’s general proximity, Kevin is stronger, faster, can jump farther, etc.

The bat also seems to strengthen his will and overall resolve, enabling him to resist even the most powerful mental assaults and illusions.

The mystical energy within Kevin’s body has a very specific purpose, the war against the forces of evil in “the Struggle.” In situations that have no direct impact on “the Struggle,” Kevin is subject to all of the normal afflictions that would affect a normal human.

Kevin Matchstick’s life was a painfully ordinary one until he encountered a vagrant on his way home from work one night.

Intrigued by the seemingly ageless man, Kevin sat down and the two had a deep philosophical discussion about Kevin’s past and personality. When the conversation drew to a close, Kevin got to his feet and continued his journey home.

While on his way, he stumbled across a mugging in progress. Consumed by a sudden need to intervene, Kevin broke up the assault by attacking the mugger. Seconds later, Kevin had overpowered his opponent with strength that could only be described as “super-human.”

As the mugger lay stunned on the floor of the alleyway, Kevin turned his attention to the victim. Unfortunately, the man died from his wounds despite Kevin’s intervention, but not before he whispered the word “Grackleflint” to Kevin. At his word, Kevin turned to see his opponent fleeing into the night.

After the fight, Kevin returned home wondering if he dreamed the whole fight. It wasn’t just his newfound strength that troubled him, it was the fact that mugger was clearly inhuman. Kevin was deep in thought when he entered his apartment and found the vagrant waiting comfortably in one of his armchairs.

He introduced himself as Mirth and told Kevin about the menace of the Grackleflints, and that between Kevin’s power and his own magic that they would defeat them.

Kevin disbelieved Mirth, even after watching Mirth literally disappear in thin air. The next day, Kevin started off for work while trying to rationalize the previous night’s events. When he got onto the same subway that he always rode upon, he was attacked by not one but 5 different Grackleflints.

Desperate to escape his supernatural foes, Kevin jumped out of the moving subway and was promptly run over by one going the opposite direction. He survived without a single scratch.

In shock at his survival and the sudden change in his reality, Kevin wandered out of the station and eventually encountered Mirth once again. At this point, Mirth finally told Kevin what was happening.

Kevin was the Hero, a being fated to take part in “The Struggle” against darkness and to defeat the Umbra Sprite and his minions the Grackeflints.

The Umbra Sprite was seeking out a man called the Fisher King; a crippled man whose magical blood was the key ingredient to a spell that would plunge mankind into an age of darkness.

Despite his lack of faith, Kevin felt drawn to Mirth and decided to participate in his “madness.” Soon thereafter, Kevin found himself rescuing a young runaway named Edsel from one of the Grackleflints.

Edsel was a young woman who was drawn to the Struggle and quickly became Kevin’s ally. Though she had no powers, she was incredibly brave and wielded a bat that Mirth used his magic to enchant.

The trio was attacked by a massive ogre barely an hour later. Kevin defeated the ogre but not before drawing the attention of the police. He was arrested (while Mirth and Edsel escaped) and temporarily imprisoned. In the process of his escape, Kevin encountered Sean Knight, the ghost of a legal defender.

Sean felt the pull of the Struggle as well and decided to fall in alongside Kevin and Edsel. As the day progressed, the 4 allies found themselves attacked by the Grackleflints and other creatures time and again until they realized that the Umbra Sprite was using Mirth’s magical presence to find them.

Recognizing that he was putting his allies in danger, Mirth abandoned them to their own devices and returned the other-dimensional world of Faerie after erasing Kevin’s legal existence. 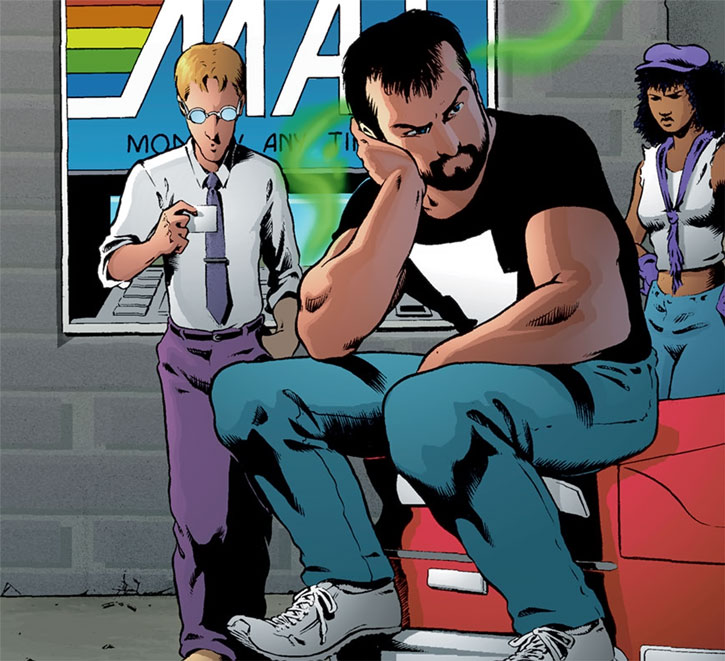 Despite their preparations, Kevin and the others fell for the ambush and Kevin was poisoned by one of the Grackleflints. The three allies retreated from the Styx and returned to the house where they had been staying.

Desperate to save Kevin but lacking any other options, Edsel summoned Mirth from the Faerie realms while Sean attempted to hold off the Umbra Sprite’s forces. Unfortunately for Sean, the Umbra Sprite summoned Cromm Cruich; the Worm of the Mists.

While Mirth arrived and transported Kevin (and Edsel) back to the Faerie lands to heal, Sean was killed (or rather dispersed since he was already a ghost) by the dragon in its human guise.

The Sword is Drawn

One year later, Kevin awakened healed in the Faerie realm. Mirth revealed to him that while he had been comatose that the Umbra Sprite had summoned as many monsters as it could to face him and that its search for the Fisher King was coming to a close.

The three allies returned to the mortal world where they were promptly ambushed by one of the Umbra Sprite’s human agents. He shot both Mirth and fatally wounded Edsel before Kevin could react.

As Edsel fell, Kevin caught her bat and beheaded the assassin with single swing. It was only then that he realized that the bat had transformed and glowed with an internal white fire. Afraid of what it meant, Kevin buried the bat to the hilt in garbage bin and went to Edsel’s side.

As he held her, Edsel revealed not only her true identity to him, but his own as well.

Disbelief filled his heart and raw emotion ran rampant through Kevin’s heart while Mirth echoed her words. Both Mirth and Edsel had served Kevin in the distant past. Edsel’s line had always held his weapon for him until he was ready to claim it and this wasn’t the first time the Mirth had played the role of advisor to Kevin’s hero.

In truth, Kevin was the reincarnation of the Pendragon, formerly named Arthur, and the bat had always been his weapon; Excalibur.

Despite his initial reluctance to wield the weapon, Kevin found himself unable to turn away from its call and eventually accepted his fated role. With that, his own power rose to a crescendo and he decided to end the Umbra Sprite’s threat once and for all.

Unknown to Kevin, the Sprite had been murdered by one of the Grackleflint, Emil, who had not only found and wounded the Fisher King, but had also grown disenchanted with the Sprite’s methods. Emil had disappeared into the night before Kevin attacked the Styx. With the Sprite’s death the Styx eventually crumbled.

In the end, Kevin and Mirth drove off in Edsel’s Edsel, seeking further adventures in the Struggle against darkness.

Kevin is a naturally big man; he stands over 6 feet in height and while he doesn’t possess the musculature or definition of a body builder, he has a naturally broad and brawny build. Kevin’s shoulder length hair is jet black and his face is normally covered in a full beard. The hint of a widow’s peak is apparent on his forehead.

Kevin can normally be found in a pair of jeans (or cargo pants), a sturdy pair of sneakers and at times a leather jacket or coat. The one constant article of clothing that he wears (without fail) is a black t-shirt with a white, Shazam styled, lightning bolt emblazoned on it.

Just to be clear, Kevin ALWAYS wears one of these shirts; he’ll wear it under other clothing if necessary.

Kevin can often be found carrying a golf or duffel bag, within which he carries Excalibur. Excalibur itself appears as a baseball bat that glows with a vibrant white light. In Kevin’s hands, it almost appears to be a light-saber.

Over the course of his adventures, Kevin has grown into a mature and experienced warrior. He has a worldly nature about him, and moves with a confidence that can only be earned on the battle field.

He is virtually fearless (save for a lingering fear of heights that he seems unable to truly shake) and tends to follow his gut. Making plans and out of the box thinking simply aren’t his greatest strengths. He also has a wicked temper and is not above killing a foe that he feels deserves it.

Since he picked up Excalibur, Kevin has completely embraced his role in “the Struggle.” He desires nothing more than to play his part in the never ending battle against evil. He will never shy away from this duty.

“Kevin Matchstick, you are either a bitter, bitter cynic or a raving loon.”

(Discussing Excalibur)
Mirth: “Go ahead then… lay it down.”
Kevin: “You know I can’t. It’s too sweet.” 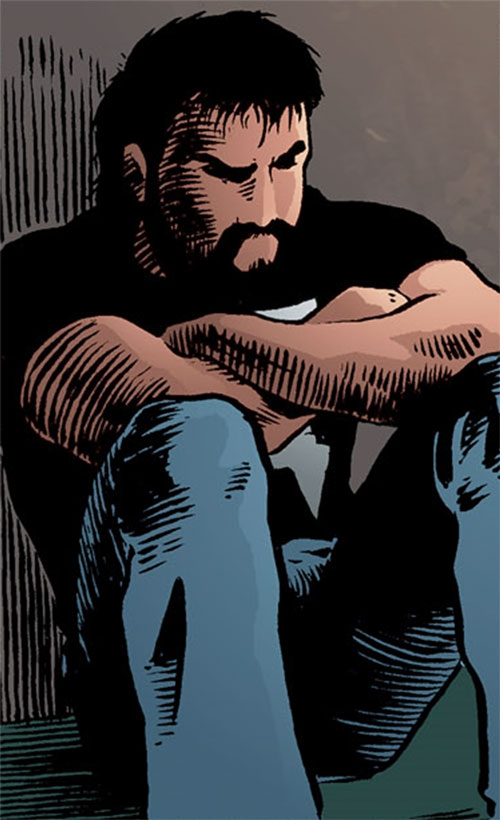 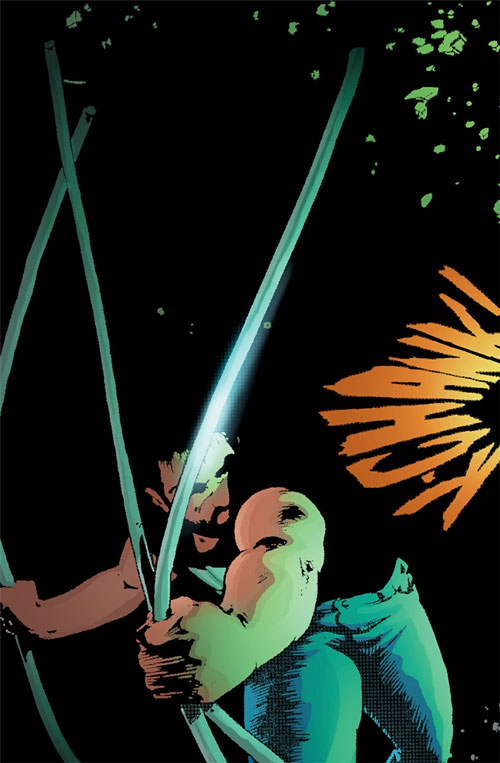 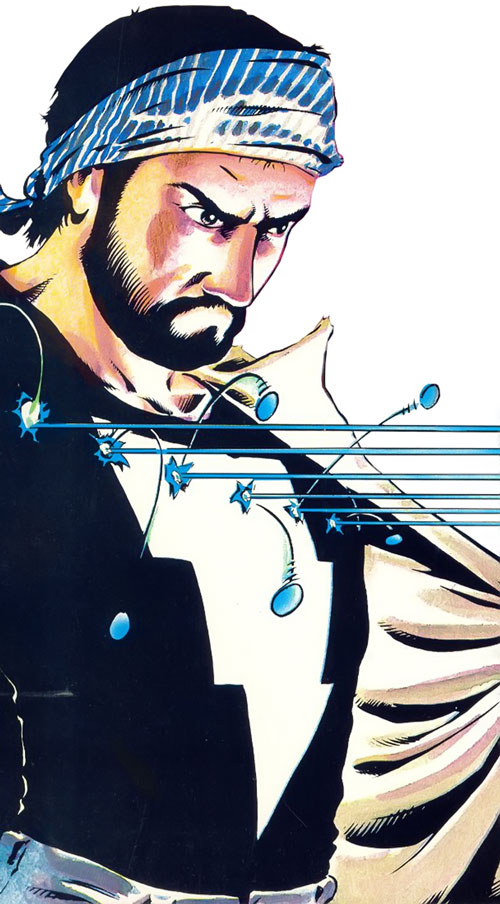 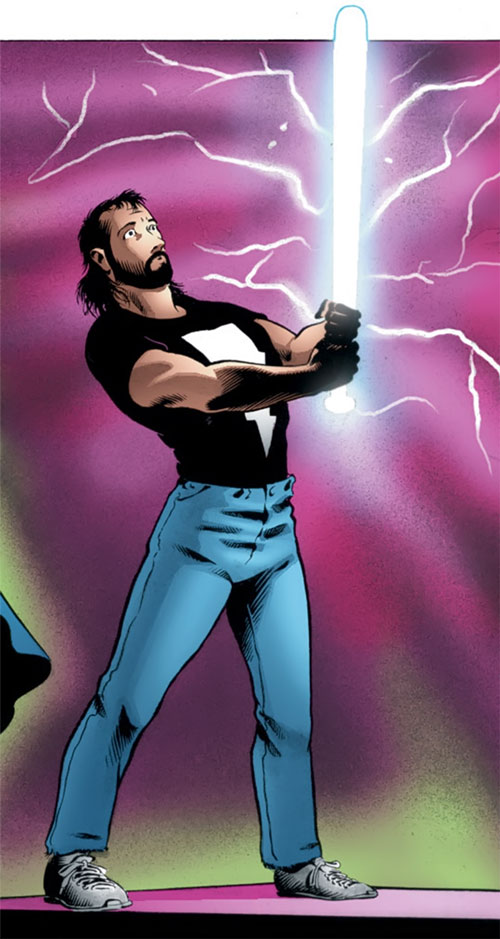 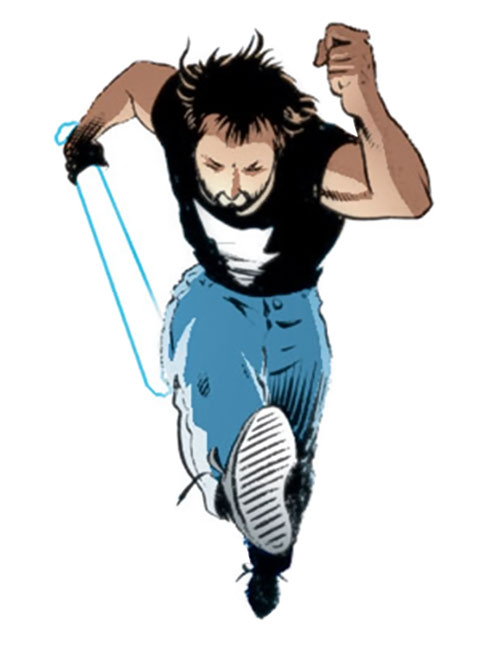 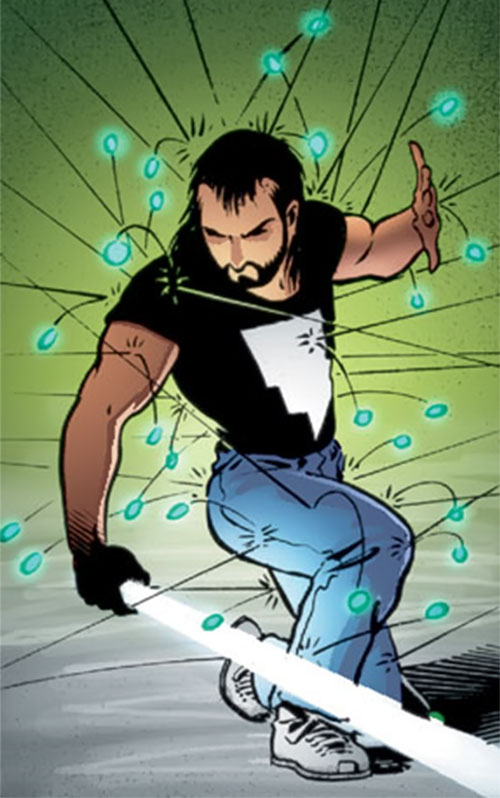 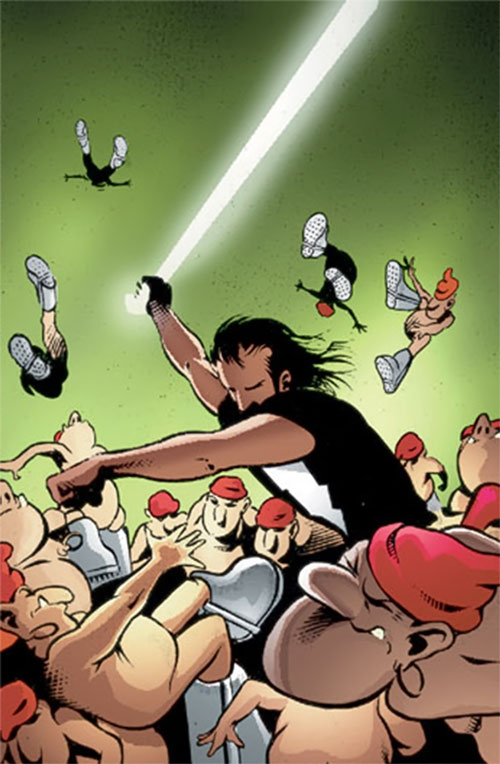 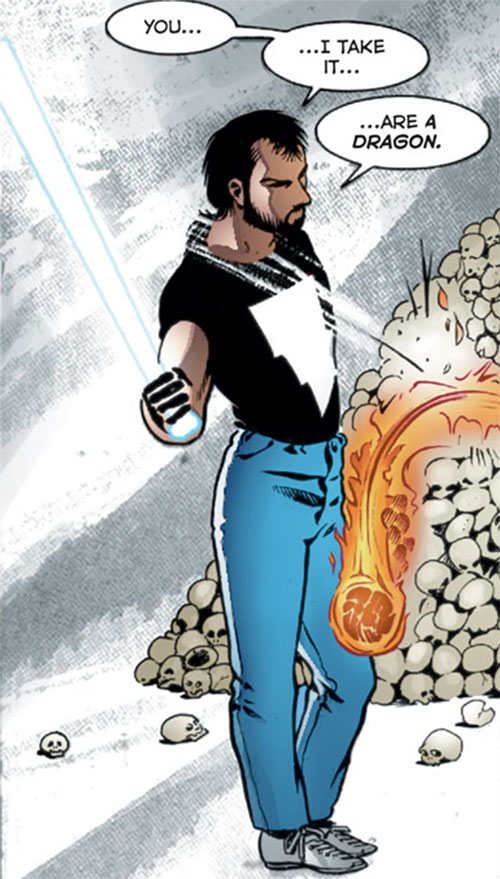 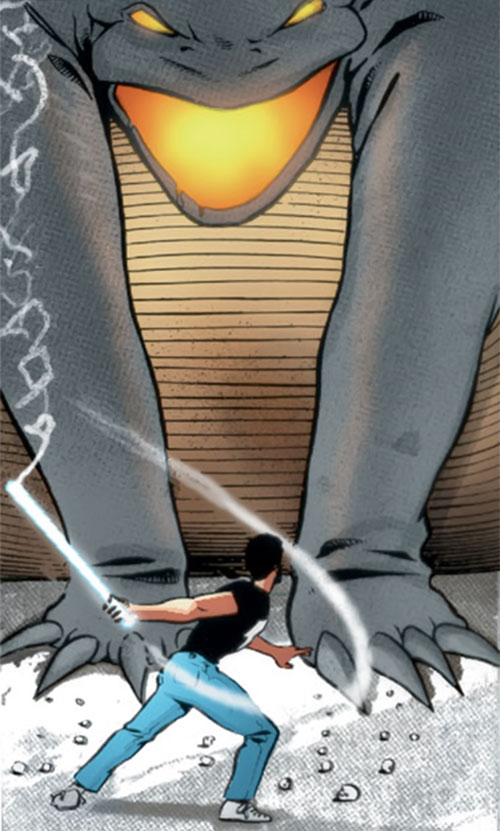