Magmaniac could instantly transform his body (in whole or in part) into a malleable molten magma-like substance. In this transformed state, Magmaniac’s body took on the characteristics of molten lava. It could generate heat in a range of 700 to 1200°C (1300 to 2200°F).

He retained full control of his body while in this state. And through experience, Magmaniac gained the ability to shape this viscous form into any continuous shape he can imagine. Moreover, he could vomit forth streams of a fiery lava-like material from his mouth at high speeds.

There didn’t seem to be a limit to the amount of time he could spend in his molten form. But he did return to his human form if he was ever rendered unconscious or while he slept.

Magmaniac was a petty criminal serving a multi-term sentence in prison, for murders that he had committed while robbing a bank. But he gained the attention of the crime-lord Machinehead.

Machinehead was assembling a group of super-powered mercenaries in order to protect his interests, and decided that Magmaniac would make a welcome addition to his team. He sent one of his employees, Isotope, to free Magmaniac from his cell and made him an offer that he couldn’t refuse.

Magmaniac worked for Machinehead for a short while. Then the crime-lord was assaulted first by the unlikely pair of Titan and Invincible, and then by the entire Guardians of the Globe. The battle was not a good one for Machinehead’s forces, and Magmaniac himself was rendered unconscious by the miniaturized hero, Shrinking Ray.

Magmaniac found himself languishing in a special cell in a Utah prison once more. That lasted until one of the extra-dimensional Invincible doppelgängers shattered the walls of the prison during the Invincible War. Magmaniac escaped the prison alongside his close friend and ally, the Tether Tyrant.

The two holed up in a tiny single bedroom apartment for several months. Magmaniac even convinced the Tether Tyrant that they could abandon crime and make a life for themselves.

Unfortunately, the two had little marketable skills. They were unable to make ends meet, and returned to a life of crime. During an attempt to rob an armoured car, they encountered Invincible once more. In short order, Magmaniac was returned to prison again.

He was freed from prison once more by Titan, who was assembling a team of mercenaries to battle a rival crime-boss. The battle went poorly. Magmaniac escaped with the Tether Tyrant, but in the process he fell out of favour with Titan and his organization.

Time passed, and the duo grew more and more desperate. Finally without any other options Magmaniac and the Tyrant threw themselves at the mercy of Titan. They pleaded for a final chance to regain his trust and respect.

Recognizing the desperation that drove the two, Titan took advantage. He sent them to assassinate Machinehead at his home. If they succeeded, they would regain his favour.

Magmaniac and the Tether Tyrant went to Machinehead’s lair. Without a plan or forethought they burst in and assaulted the crime-lord. They the human guards and would have killed Machinehead if not for the interference of the armoured criminal Vault.

Vault correctly surmised that Magmaniac would be vulnerable to a high voltage electric current. The discharged through Magmaniac’s head slew him on the spot.

In his human form, James appeared to be a nondescript White male of average height. He was relatively slim, and has a completely bald pate.

When utilizing his superhuman abilities, James’ skin glowed with a golden orange light. His body shape was often distorted as his form flowed from solid to liquid, and he could often be seen with elongated limbs or even with a single flowing liquid column where his legs would have been.

His costume was a simple white jumpsuit, with short sleeves and pant legs that only covered him up to mid thigh. A swathe of orange material covered the centre of his chest and wrapped up around his neck in a high backed collar.

Magmaniac was your basic not-too-bright criminal muscle. Though he was not particularly malicious, his powers did not lend themselves to victimless crimes, and he had been to prison for murder.

His motivation for committing crime was always simple, to get enough money to live easily. While he wasn’t an overly bright man, he realized that he wasn’t smart enough to make it on his own. With this in mind, it was easy to understand why Magmaniac always attached himself to a more powerful and intelligent backer.

As a minor villain, Magmaniac can be inserted anywhere.

(In response to Tether Tyrants complaints about going straight)
Magmaniac: “You’re right.”
Tether Tyrant: “You mean —?!”
Magmaniac: “Yeah. Go strap on that alien pet of yours and let’s go steal some crap. Magmaniac and Tether Tyrant are back in business.”

“How bad at this are you ? I worked for you for three years and you don’t know bullets can’t hurt me ?!” 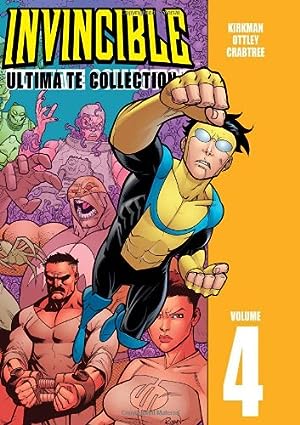 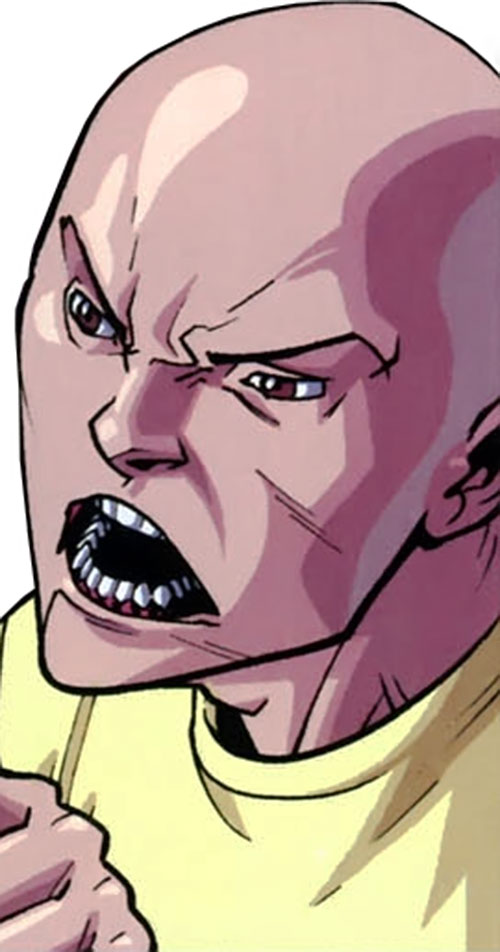 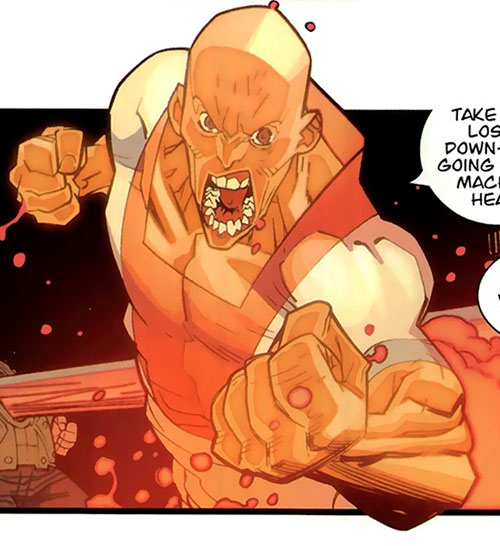 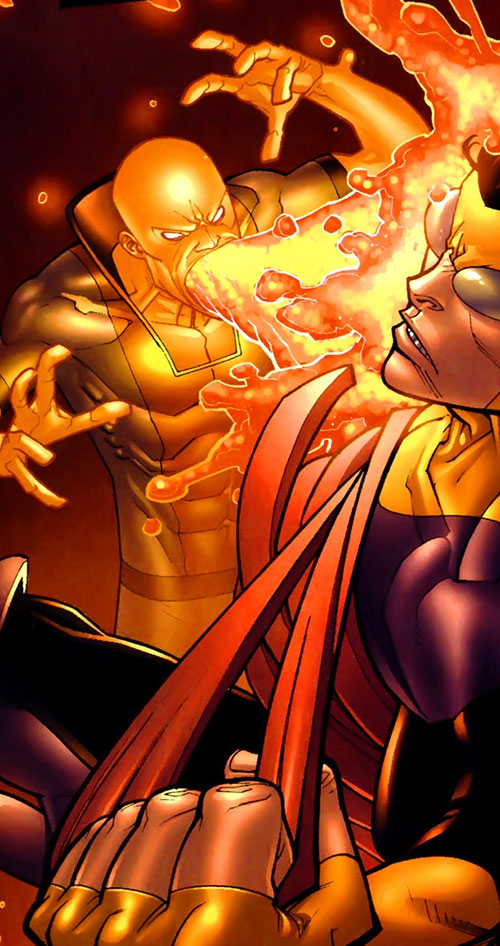 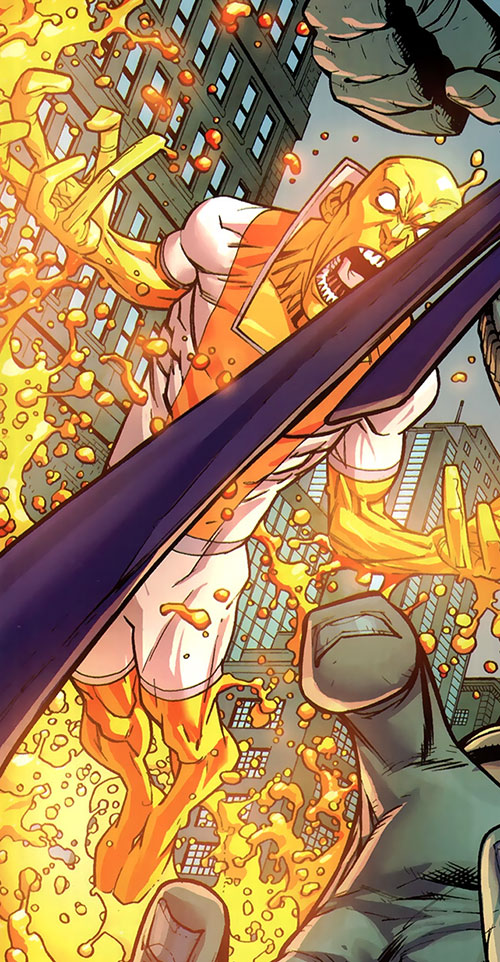