The Magnificent Seven is a 1960 action Western movie, and famously an adaptation of The Seven Samurai. Like its inspiration, TM7 is nigh-universally considered a true classic, and was highly influential. Its commercial success resulted in three sequels.

Chris Adams is the leader of said Seven. The great Yul Brynner played him early on, and the role was then handed over to George Kennedy, perhaps known best as Dallas’ Carter McKay. Later on it was van Cleef, who was cool as usual.

This loosely held, informal taskforce consists of Chris and six good men. They have recently been hired for the current task or mission (usually for next to nothing). They are usually a mismatch of odd, yet colorful, individuals, but all are very good fighters.

Chris knows and recognizes gunfighters everywhere, and they recognize him. Thus, he has little problem with getting them to join his group. Some even search him up if they’ve heard that he’s looking. The seven actually work in the borderland between the law and the lawless, but their goals are always honorable and the right thing to do.

Chris is fast on his feet and the draw and is mentally alert with nerves of steel. A very reputed gunman. Having roamed the border areas for very long, he fluently speaks and understands Spanish, and often translates it for others.

An oppressed Mexican peasant village assembles seven gunfighters, including their leader Chris Larabee Adams, to help defend their homes from a gang of ruthless bandits (The Magnificent Seven).

When a bandit leader wants to build a church in memory of his dead sons, he raids three Mexican villages and kidnaps all the men for labour. One of these men is Chico, formerly of the original Magnificent Seven.

His wife Petra immediately sets out to look for Chris and Vin, the other surviving members of the Seven. Chris recruits four others (a playboy, an avenger, a highwayman and an orphan) to reform the Seven, once again defending farmers from their oppressors (Return of the Magnificent Seven). 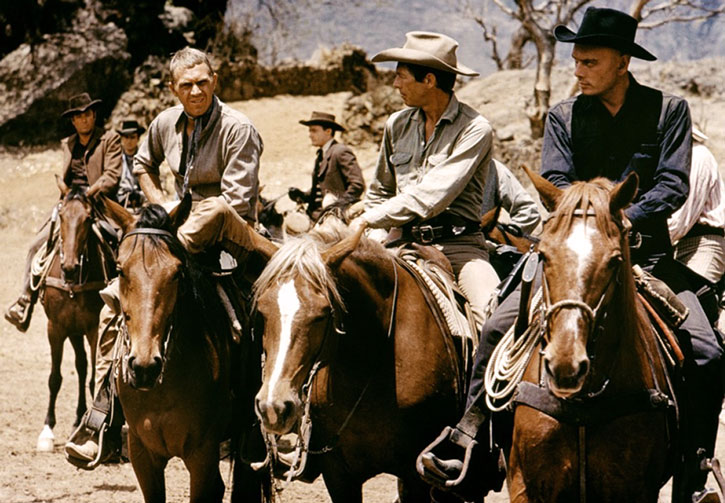 A Mexican revolutionary hires an American gunslinger, Chris Larabee Adams, who then gathers a posse, to organize the rescue of their leader from a brutal army prison (Guns of the Magnificent Seven).

Marshal Chris Adams turns down a friend’s request to help stop the depredations of a gang of Mexican bandits. When his wife is killed by bank robbers and his friend is killed capturing the last thief, Chris feels obligated to take up his friend’s cause and recruits a writer and five prisoners to destroy the desperadoes (The Magnificent Seven Ride).

Yes, this history section is short for one very good reason: You should see the movies yourself, fellow cowpoke!!

Chris was originally (Yul Brynner) a bald, rugged stranger in black trousers, a black shirt and a black cowboy hat. He has an aura of authority and calmness. He will regularly light a cigar at the most appropriate of moments.

He has a commanding, distinctive voice and walks tall, but as if he had been sitting for much too long on horseback. This version is probably the one best used in a game.

The later versions wore less dark clothes, and had somewhat livelier demeanor. The George Kennedy version had a bit stockier build and didn’t stand out as much as a unique individual, while the van Cleef version did and was more the wiry and slender sort (with his trademark facial expressions nonetheless).

Chris, like most of the others in his group, is an old, disillusioned gunfighter, although of an inspiring sort. He smokes and drinks hard and regularly, but still maintains his stern self-discipline at all times. He drifts because he has nothing better to do and no prospects.

He possesses a typical drifter mentality and refuses to be tied down to any one place. No one has a hold on him, and he steps aside for no man. As is typical of a hardened cynic his sense of humor is quite dry.

His code of conduct is whatever he believes is the right thing to do, and it is usually to stand against regular authorities, but help the poor in need. As such, he is morally and ethically somewhere between good and evil.

He will accept a lowly paid mission at the spur of a righteous moment, such as from a group of poor farmers needing protection from a threat or another. In fact, his going rate is 600 dollars for all seven in his team (which is not good payment for their line of work and missions).

The missions he chooses are usually considered impossible, and there is no doubt in anybody’s mind that, while possibly successful, they will all go out in a glorious fashion, leaving most of them dead. 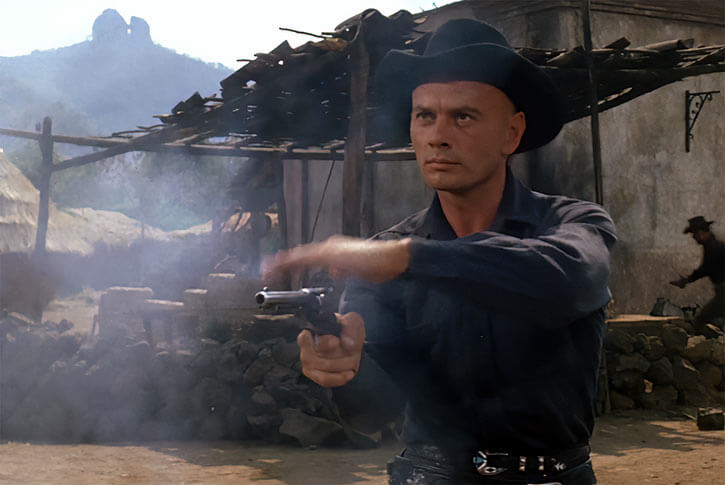 He takes any accepted contract very personally, in a honor-bound manner, but is smart enough to give up against impossible odds to fight another day.

When hired, he has no problems finding members for his new task force, which will often be a pretty mixed and eclectic group of individuals.

In later years he actually steps up to become a US Marshal, which suits him well. He has settled down enough to have a spouse too, but that got cut short, and he settled for justice and vengeance instead.

While principled, he lies to dying men to make them feel better. He is quite loyal and helpful towards his friends, and is a naturally accepted, quite stoic leader of men. He does not trust the police at all.

He understands the motivation of evil men well, which makes him excellent at dealing with them in the properly hard way, and has no compulsions whatsoever to kill in self-defense, but will not harm innocents.

Chris has ’friends’ within all social spheres, ranging from poor farmers, various gunfighters, hardened bandits and rodeo riders to bribed officers of the law, and wherefore he can talk to anyone as an equal.

He will silently mourn fallen comrades, and believes himself, as a matter of honor, to be in reluctant future debt to anyone who has accompanied him into an impossible mission and survived.

Still, naturally reluctant to offer his life freely, he needs some extra incentive (such as opressed innocent poor or the close ones of the comrade being subject to excessive threats, violence or murder) before agreeing to work free to avenge or protect a former comrade.

“It’s only a matter of knowing how to shoot a gun. Nothing big about that.”

[Villagers tell Chris they collected everything of value in their village to hire gunmen] “I have been offered a lot for my work, but never everything.”

“The old man was right: only the farmers won. We lost. We always lose.”

“Because in all the years I’ve made my way with a gun, I’ve never once shot a man just to see him fall. If that time ever comes, I’ll throw my guns in the water bucket on the ride out. And so will you.”

“I won’t let your drown your grief in other men’s blood.”

[Chris and Vin were just shot at, hitting the tip of Chris’ cigar]
Vin: “You elected ?”
Chris: “Nah. I got nominated real good.”

The leader of 40 terrorizing bandits (having just been turned down by Chris and his 6 friends who protect the town): “You hear that, Sotero ?! You hear what he said ? ’ride on’… to me ! You tell HIM to ride on before I become angry. Him and the others. Because if I leave you with empty hands everybody in this village with answer to me… when I come back.”
Chris (facing down the bandits): “You won’t come back.”
Leader: “Why not ?!”
Chris: “You won’t have any guns. Remove them right now and drop them.”
Leader (turns to his men): “Generosity. That was my first mistake. I leave these [villagers] a little bit extra and they hire these men to make trouble. It shows that, sooner or later, you must answer for every good deed.” (combat starts and bandits are routed !)

He would no doubt have met, and either teamed with or fought against Wild West legends such as Jonah Hex, Scalphunter, Bat Lash, El Diablo, Nighthawk and Cinnamon. In these scenarios his HP total are doubled, all his Stats are increased by 1 AP each and all his Skills are increased by 2 APs each, making him a comparable Wild West Legend himself.

In fact, the aforementioned might be the members of his next iteration of the Seven! 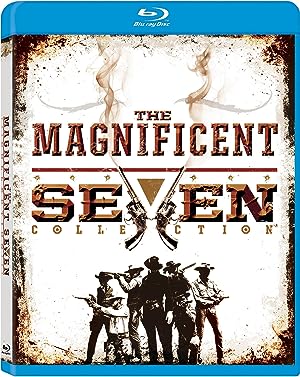 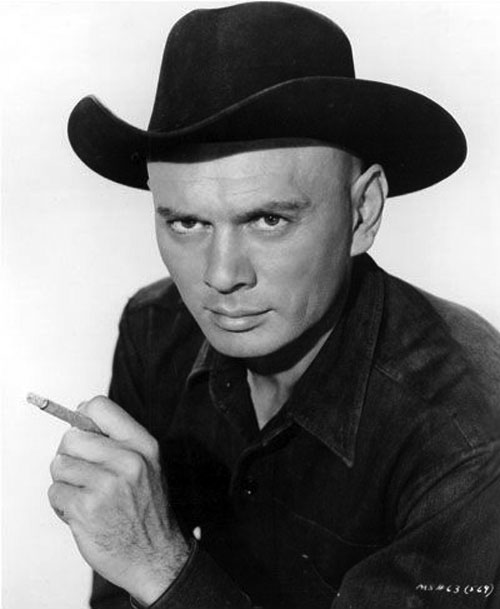 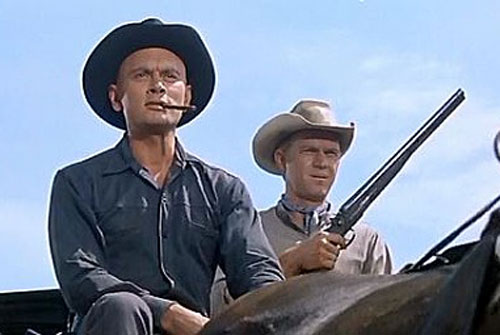 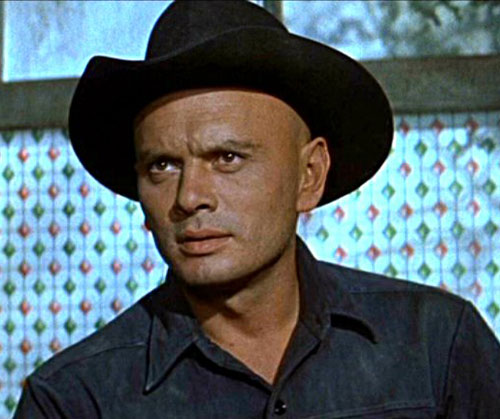