Mostly forgotten publisher Ace Magazines did pulps  during the 1930s, and comics during the 1940s and 1950s. Most now know of their work indirectly, when their Doctor Nemesis character became public domain and was reinvented as Marvel’s Doctor Nemesis.

Writeups.org contributor Sean took notes for a few Ace characters. These include Marvo the Magician, (F)Lash Lightning and Magno the Magnetic Man.

Not much was ever revealed about Magno or Davey. Magno was the master of all magnetism. But his secret identity, if he had one, was never mentioned. Magno apparently made his way around the city in costume at all times. I don’t think any origin was ever given for Davey, either.

The story in one issue does provide some clues. Davey is referred to as a young friend of Magno’s. He sometimes wears a “little Magno suit” allowing him to share the adult hero’s powers. Davey’s parents are not shown in this story, but it is revealed that he has a sister with whom he lives.

Magno and Davey fought one villain more than any other — The Clown. This sinister madman made his first appearance in Super Mystery Comics No.5.

His black-haired face is uncovered. His chest symbol consists of two white starbursts, one above the other.

He could easily fit in the overcrowded DC Golden Age. He could possibly be the inspiration for the (ugh) postboot Legion’s Braalian member Magno. He could also have some connection to the obscure Quality Comics character Magno who was part of Uncle Sam’s first group of Freedom Fighters.

He could also be the only character who truly understands the “Magno Force” which powers all characters with magnetism.

Bonuses and Limitations:
Can only fly towards ferrous objects.

Bonuses and Limitations:
The source of Davey’s powers is unclear. In one panel, it is Magno who is apparently temporarily giving him his powers. It is also possible that the costume that he normally wears also gives him these powers.

Drawbacks:
Public Identity (but then, that’s what you get when your superhero name and your civilian name are the same !), Age (young). 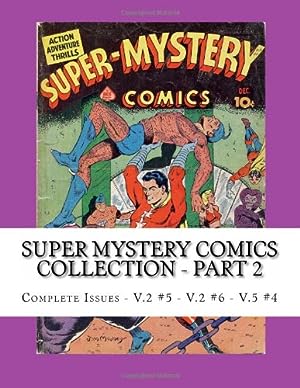