Magno Lad is said to be a champion of the Magnetic Olympics in the stories, while Who’s Who says that he was a three-time champion in magno-ball. I assume that both stories are true.

Thus he can attract, repel, or control any magnetic atom or ore. Applications include turning metallic objects into projectiles, ripping apart Wildfire’s containment suits, etc. (in DC Heroes RPG terms, Magnetic Control). He can affect bio-organisms by the trace metals in their blood, tossing them around almost like he would metals (Attraction/Repulsion).

He has excellent control, as well, due to his magno ball practice (Accuracy). He has not demonstrated the breadth of creative uses of magnetism that Cosmic Boy has, though he certainly has the potential. He has shown himself able to magnetically bypass or control computerized security systems (Thief/Security Systems).

Magno Lad is also possessed of a professional athlete’s physique and reflexes. He is thus capable in physical combat.

Though the source of the technology is unclear, as a member of the Legion of Super-Villains Magno Lad has made use of transuits to allow him to survive in space. He also has access to anti-grav tech which allows him to fly, and devices which allow him to communicate with his teammates in an airless environment.

Magno Lad, real name Kort Grezz, is a native of the planet Braal in the 30th century. His native magnetic powers are far superior to nearly all other Braalians. He was a three-time national champion in magno ball, and was also Olympic Champion in Braal’s Magnetic Olympics. His power even exceeds that of Cosmic Boy of the Legion of Super-Heroes.

Kort, nicknamed “Magno Lad,” accomplished all of these great feats before the age of 18. Having achieved every other accolade by virtue of his power, Kort traveled to Earth in search of his next honor, “certain” membership in the Legion of Super-Heroes.

Kort was shocked and outraged at his rejection. That was even though the Legion’s policy of requiring new members to have a unique superpower was well established.

He came together with other disgruntled rejects. Each of those felt that he or she was more qualified to be a Legionnaire than their Legion counterparts. This “Legion of Super-Rejects” made another bid for Legion membership, challenging their counterparts for their places on the team. 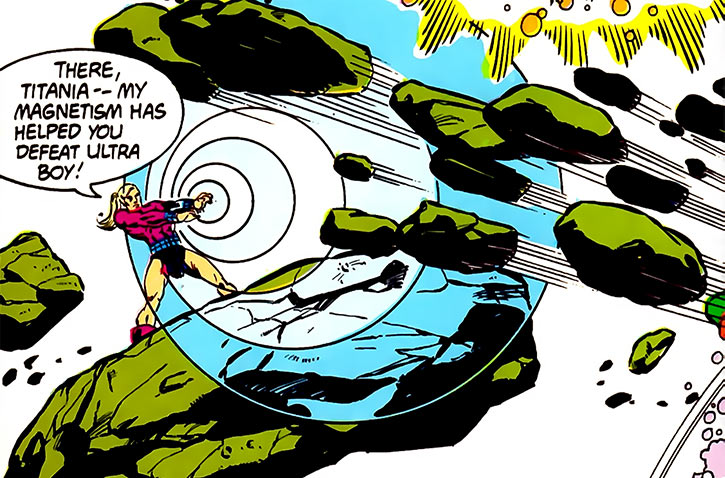 Kort and the others were defeated by the superior skill and teamwork of the heroes, and Magno Lad was rejected again, lucky to escape criminal charges.

Humiliated and afraid to face the reporters at home, he told them only that “a better offer” had come along. Grezz then followed Esper Lass’s urging to join the Legion of Super-Villains. Before he fully realized just how ruthless his new associates were, he became too deeply involved with the group to salvage his reputation.

So he decided to make the best of it by doing everything he could to help the LSV win. He also tried his best to destroy those who had dared to belittle them, namely the Legion of Superheroes!

He proved to be a valuable addition to the LSV. In one skirmish, Magno Lad even defeated Wildfire by magnetically ripping apart his containment suit. But eventually he was captured with the rest of the LSV. As of this writing Grezz in custody on Labyrinth, the prison planet of the United Planets.

Magno Lad is a fit, athletic man with blond hair and blue eyes. He wears a purple costume that leaves his face and legs bare, with purple buccaneer boots, blue bands around his wrists and waist, and a blue loin cloth.

He looks as if he were still dressed to compete in an athletic competition.

Prideful and a bit arrogant, Magno Lad is also fairly smart. He doesn’t back down from a fight and uses his powers well, sizing up his enemies as if he were on a Magno Ball court and “playing to win.”

The drive and determination that led him to become an Olympic Champion is now turned against the the heroes who dared reject him.

“Everyone from our home world of Braal has magnetic powers, Cosmic Boy. But mine are stronger than yours !”
(Cosmic Boy) “Eeyow ! Magno Lad is really Kort Grezz, champion of Braal’s Magnetic Olympics ! Compared to him, I’m a weak stripling !”

“Sun Emperor said you were a real charmer, Titania – it’s a shame he lied.”

“We’re not all children to be frightened by an enemy, Chameleon Boy – whatever shape you change into, Magno Lad stands his ground !”
(Chameleon Boy in shape of giant monster): “Suits me.”
(Magno Lad): “Gulp.” (Gets stomped.)

I kept thinking that Magno, in the post-boot continuity, was going to turn out to be that reality’s version of the villainous Magno Lad. But I guess not.

There’s no reason you can’t use Magno Lad exactly as is. None of the timeline shenanigans of the 30th century affect him. He’d also make a pretty decent 2nd tier villain in just about any campaign. He’s not quite smart or versatile enough to be a villainous mastermind, but would make a good lieutenant.

You may also spend some time thinking about the origins of the planet Braal, itself, and its connections to the 20th and 21st century millieu. Pre-Crisis, Braal was just a Terran colony whose inhabitants were mutagenically altered to have magnetic powers so they could fight ’metal monsters’ native to the planet.

Post-Crisis but pre-reboot, Braal was a Gandian world, a sentinel planet inhabited by metagene-active survivors of Dominion concentration camps at the behest of Valor. He wanted them to be a buffer between the Dominion and Earth. That story appears to be at least somewhat true Post-Crisis at well.

But there could be more to the story, too.Some have suggested, just for fun, that Magneto or Polaris or others might have descendants on Braal. No, I know they’re not in the DCU. But they could be…

Bonuses and Limitations:
Thief (Security Systems) is a Powered Skill (-1 FC) and is Derived from Magnetic Control (-1 FC).

Equipment:
All of the Legion of Super-Villains can fly and operate in space just as their heroic counterparts do, indicating access to technology similar to that detailed in the Legion Equipment write-up. That likely means a Transuit, some form of anti-gravity flight technology (either a Flight Belt or an early model Flight Ring) and some form of communications technology (a telepathic earplug or perhaps a simple radio).

Individual GMs will have to decide how to adapt that equipment, but the LSV’s tech should be purloined or copied equipment, and generally should have slightly lower AP values and/or slightly higher R#s. If the villains have Flight Rings (rather than Flying Belts) then they should only be the earlier version of the rings.

He would have had Local Hero on Braal before he joined the LSV, and High level connections with Magno Ball athletes and coaches. 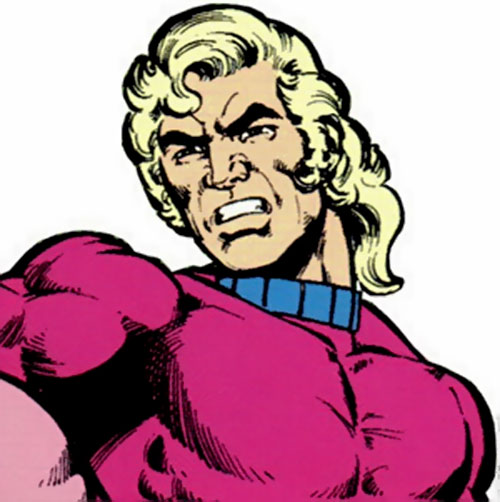 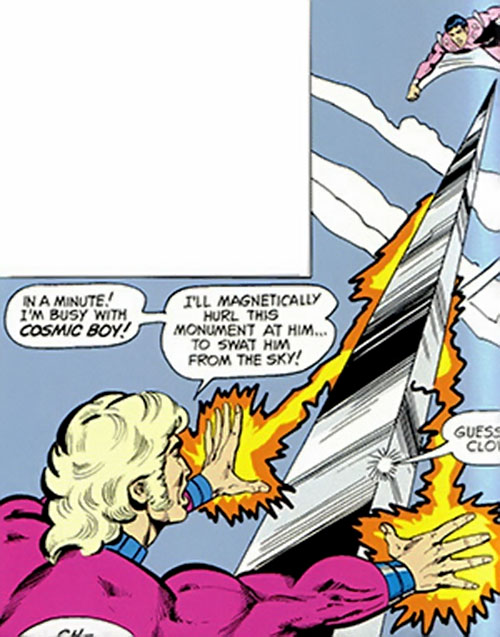 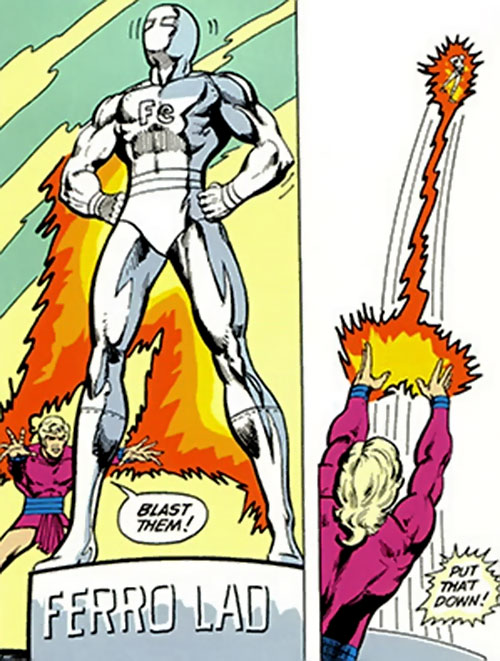 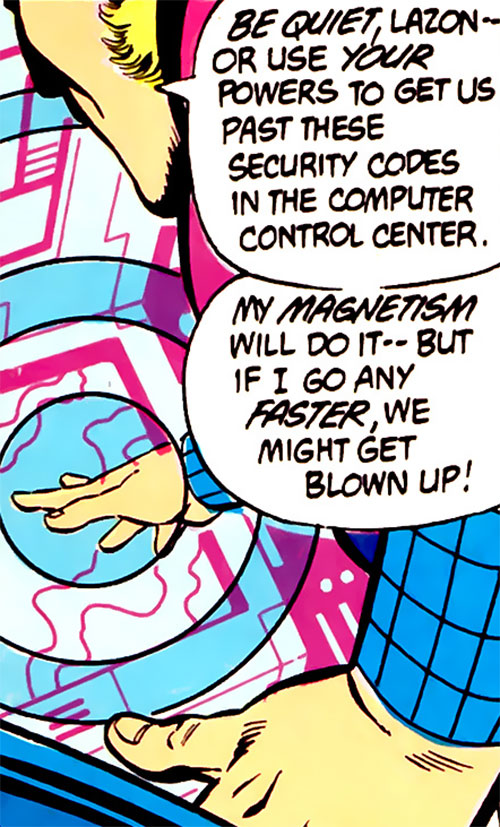 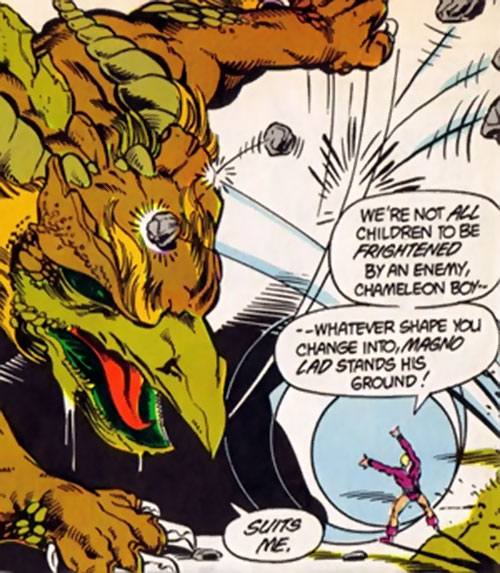