Mai’s been trained from birth in Shiranui-ryuu Ninjitsu and koppo-ken. Her fighting style consists of all sorts of acrobatics and evasion techniques, plus bone and pressure point manipulation.

Game play wise her style is very hit and run. She’s really good at avoiding attacks and then countering with something suitable. But combos aren’t great so she tends to go for single powerful strikes.

She’s also got a really good affinity for fire. Therefore, a lot of her more powerful attacks add flame to the strike for more damage. And a lot of her supers have her engulfing herself in flames (in DC Heroes RPG terms, Flame Being). She’s also got a few quick strike poke attacks with her fans and clothing to keep opponents both at bay and on their toes.

Mai fights with a seemingly endless supply of steel fans. These can also be thrown as projectiles and sometimes set on fire for added damage.

Her outfit (or lack thereof) is alledgely part of her fighting style as a kunoichi (female ninja). It allegedly allows her to fight unencumbered and sensually distract opponents to gain the upper hand.

In game terms she would most likely spend most of her Hero Points  on enhancing her damage.

Outside the ring she’s also a skilled acrobat and climber as part of her ninja training. Her traditional upbringing has trained her in other skills such as cooking, sewing, and traditional Japanese tea ceremonies.

Mai was raised in a secret ninja village and trained in their traditional ways from birth. She was actually the granddaughter of one their elders, Hanzo Shiranui. At a young age she showed potential at being a ninja, but was at times a bit air -eaded.

One day all the girls in the village gathered to gawk at the new blond haired foreigner who had moved in. Mai was also interested at first, but getting to know Andy Bogard killed that off. Exceedingly serious, Bogard only seemed interested in training. It wasn’t until later, when he gave her a present on her birthday, that she saw his compassion and fell in love with him.

Then one day he left the village without telling her to participate in a fighting tournament and avenge his father’s murder. Mai was of course furious and vowed to find him.

Mai found Andy in South Town. She started training under Jubei Yamada, a local martial artist and close friend of her family. That was an excuse to stay close to Andy. She participated in the second Fatal Fury tournament as well.

Technically, she did participate in all the preceding FF games. But in these she never really does much other than keep pestering Andy to marry her and be objectified eye candy.

Mai became infuriated when Andy refused to let her join his team for the upcoming tournament. Instead he chose to fight with his brother Terry and long time friend Joe Higashi.

She was able to join another team and participate as her friend Yuri Sakazaki also felt similarly snubbed when her father, brother, and love interest refused to let her participate. The team was rounded out by King who vowed to support her friends before they went off and did something stupid.

Yuri left the team to join her family’s team after her father retired. Not long after a mysterious woman approached them and offered to join their team. That woman was none other than Chizuru Kagura, who wound up being the sponsor of the tournament.

The team didn’t fare well this time as Chizuru wound up abandoning them towards the end. She moved on to her actual, hidden agenda to assist Kyo Kusanagi with banishing their sworn enemies the Orochi.

Mai finally got a chance to join her fiancé Andy on his team, the Fatal Fury Team. That was because new rules allowed for four members to a team.

The team didn’t have a major impact on the story, but they were said to be one of top tiered teams. So this did prove that she’s capable of fighting alongside the heavy hitters.

Mai was chagrined when the Fatal Fury Team replaced her with Blue Mary Ryan. Yuri was feeling similarly dejected as King had replaced her on her family’s Art of Fighting Team. As past participants they had received an invitation, but couldn’t seem to fill the roster.

They asked their friend Kasumi Todo to join them, and she suggested to enlist her friend Hinako Shijou. This allowed them to register a team.

This constant coming and going of characters might explain why a supposedly respected team doesn’t perform that well. It likely prevents developping good teamwork. Or perhaps it results in poor fits bringing the rest of the team down. It’s either that or good old fashioned sexism.

Mai and King participate again. Hinako once again joins the team, but Kasumi is asked to join her family’s team.

Xiangfei, a long trouble maker and previous contender from some of the previous FF games barges into to King’s bar Illusion. She demands to join, which is granted to have a fourth fighter.

The tournament has now reverted back to three people per team.

Mai, King, and Blue Mary are all enjoying a baseball game when they get jumped by a bunch of thugs. They easily trounce them and force them to retreat, but at the cost of ruined concession snacks.

Mai volunteers to buy some more concessions and finds an invitation for the next KoF stuffed into one of the napkins. It also contains a note signed by Malin, whose name the thugs from before had mentioned, saying that she looks forward to meeting them in the tournament. The trio of course decides to participate.

Mai doesn’t actually participate in these tournaments. Instead, she is off searching for Andy, who left to train his student Hokutomaru without telling her.

Mai, Yuri, and King enter the tournament once again. This is because a snarky tabloid rag with sexy pinups didn’t give them enough space. The editorials implied that the younger girls who fought were prettier.

(Yes, this is seriously their whole reason to enter. Proving that pretty much every reason for them entering the next tournament can get dumber.)

Mai and King once again can’t find another participant for their team. But they are suddenly approached by Alice, a new fighter who’s started to make a name for herself and who for some odd reason uses a lot of Terry’s moves. So yes of course they let her join because at this point why not?

She didn’t make an appearance in Garou: Mark of the Wolves. But the creators did let it slip in an interview that she and Andy were still together. So she’s probably still pestering him for marriage and children (after more than 20 years!)

Yes, she’s made quite a few. But most of them are really silly, so it’s probably best if we disregard them.

Mai’s moves and visuals in King of Fighter ’97.

Mai’s an elegant, attractive Japanese woman of impressive proportions. She wears a very skimpy variation of a white-trimmed, red yukata (a summer kimono) with a very short hem and high slits up the sides. Her clothing provides next to not coverage or support for the chest, yet she always manages to pull an infinite number of fans from under her top.

She also wears traditional tabi boots and light arm forearm guard both of which are red and match her outfit.

Her hair is worn in a high ponytail and adorned with an ornament said to be a keepsake of her deceased mother.

Outside of the ring she tends to dress casually in tight T-shirts and short shorts. But she does on occasion wear elegant dresses suited for more formal occasions… except for being super-revealing.

Not really much to go on here. She’s stated to be a traditional lady. Yet her antics and immaturity make her come off as a total air head.

She spends an exorbitant amount of time dreaming about love and romance. She spends quite a bit of time doing girly things like maintaining her appearance or admiring beautiful girly things. She also tends to engage in a lot of girl talk about cute boys often commenting on their appearance, but will always end such discussions, “But he’s not as cute as Andy.”

Speaking of Andy, Mai is obsessed with him and will not stop until the two are married with children. This includes wearing wedding dresses around him and surprising him with a realistic looking baby doll. Her actions would come off as psycho stalker if it weren’t for the fact that deep down Andy does care for her. But he is much more reserved with his feelings.

By publication time  they have been engaged for nearly 30 years. Their children could be thinking about having children by now.

In typical early 1990s fashion, Mai was conceived as a sex object first and foremost. She has a sort of generic appealing girly personality tacked on and not much else. And while most female characters from that era have evolved from that, it never really was the case for Mai.

She just hangs out with her friends doing the girl talk thing. And then she fights in skimpy eye candy outfits and constantly harasses Andy about marriage.

Non-cannon animé  and comics have given her slightly more complex arcs, but not by much.

Advantages:
Attractive, Insta-change, Iron Nerves, Languages (Japanese), Lightning Reflexes, Schtick (Gratuitous Fan Service (Insta-change intro move at the beginning of matches and pretty much every round she’s active in combat), Telescoping Feint (both her fans and the tassel on the back of her outfit can extend far further than they initially appear. These can be used for quick surprise strikes)). 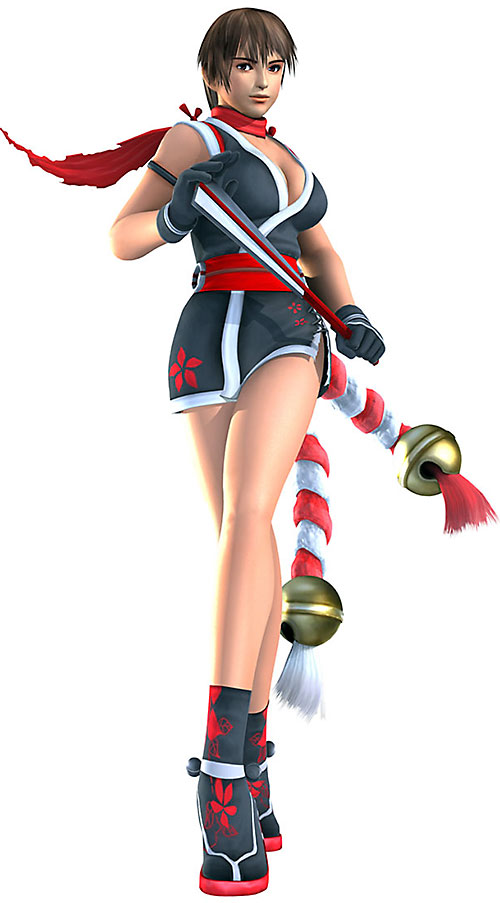 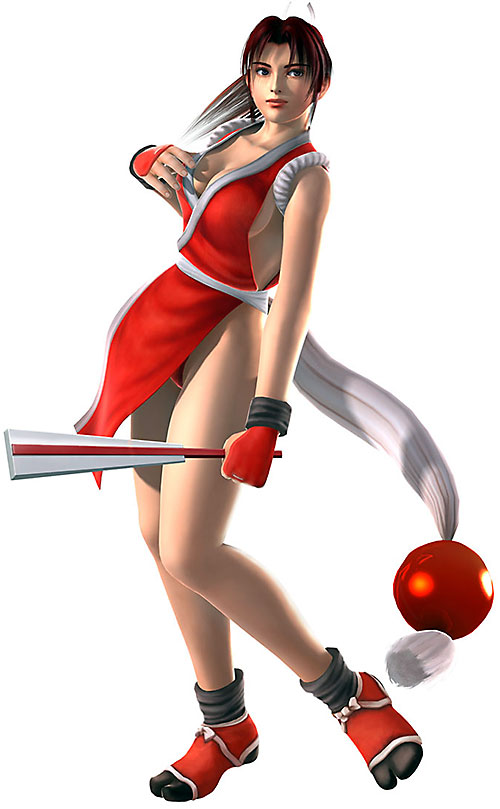