Most people think he also has bio-centric slight superhuman strength, invulnerability, gravity negation and power blasts. But it is actually his magical horse that can do all these things.

The power blasts, though mentioned twice in dialogue and captions, are never actually demonstrated. Presumably there’s some reason why they weren’t employed. Perhaps Thunder needs to charge up, certain conditions have to be met, they too visibly originate from the horse rather than the rider, etc..

Thunder is Mapleleaf’s partner – a beautiful magical horse. Although most people assume Major Mapleleaf has superpowers, it is actually Thunder who is a superequine. Mapleleaf has no powers whatsoever, though he will not admit it.

Thunder is about as intelligent as a human, but cannot speak. Howbeit he seems able to convey basic messages, such as “your help is needed”, through meaningful gazes. He hangs around and works with Mapleleaf because he’s his friend.

Lou Sadler is one of the two sons of WWII Canadian hero Major Mapleleaf, who fought alongside the Invaders. Mapleleaf retired in 1963, and Lou was presumably born in the late 1970s. His brother Michael had been born several years before.

Lou and Michael’s childhood was difficult. By the time they were born, the former war hero had become a bitter has-been and a alcoholic, abusive disciplinarian. When Michael got out of the closet, things became even worse.

During his late teens or early 20s, Lou became friends with a magical flying horse, Thunder. Nothing else is known about Thunder or how they met.

In 1992 Michael Sadler died from AIDS, which devastated his father.

While the now-aged Major Mapleleaf was grieving, Alpha Flight member Northstar happened to rescue an abandoned HIV-positive infant. He unofficially adopted her before she would die, naming her Joanne Beaubier.

Joanne’s tragic and very short life received extensive media coverage, which infuriated the elder Sadler. Everyone was fawning over the innocent, dying little girl, but no such public outburst of emotion had occurred when his son died. Despite being homophobic himself, the old man blamed this on homophobia.

Major Mapleleaf was presumably drunk when he attacked Northstar and little Joane. To counter Mapleleaf’s accusations, Nortstar took the unusual step of coming out of the closet in the middle of the brawl.

However, Mapleleaf renewed his accusations. He blamed Northstar for hiding his sexuality from the public and denying the Canadian gay community a chance for greater acceptance and consideration. Northstar punched him unconscious, but they later made peace.

It seems that Louis Sadler joined the RCMP at 18 or 19 – it is never directly stated. It is also possible that he started a special training regimen as a teen so as to become the new Major Mapleleaf, but this is a No-Prize Hypothesis  to explain his exceptional physical abilities.

Lou Sadler eventually offered to become the new Major Mapleleaf to the RCMP . Part of his motivation was apparently to redeem the reputation of his father and to have people think well of Major Mapleleaf again.

The gendarmerie reached an agreement with him. Most of the new Major’s work would be safety education and public appearance for children. Major Mapleleaf did get involved in some actual law enforcement cases, though.

Sadler never revealed that he did not have any powers and that his magical horse was the one with super-abilities. Thunder does not seem to mind.

When the original Alpha Flight disappeared, Sasquatch assembled a new team to rescue the old one.

He considered Major Mapleleaf II for a time, but decided he was too wonder bread for what he had in mind. However, Mapleleaf learned from other policemen that Langkowski had been seen observing him. As a result, he politely hounded Sasquatch to become an Alphan. Faced with a shortage of recruits, Langkowski agreed.

This new, chaotic version of Alpha Flight had a handful of adventures. They rescued the lost team and even brought back the classic Alpha Flight after some temporal manipulations.

Team member Puck (Zuzha Yu) started dating Mapleleaf. Though he was initially completely clueless as to her intents, they eventually formed a couple. After a year, this temporary version of Alpha Flight dissolved.

Now a slightly higher-profile hero, Mapleleaf continued his adventures. He was joined by Puck, who was won over despite her initial reluctance at leaving her bar owner job. They became a pair of minor but popular Canadian heroes.

Mapleleaf and Puck reportedly married and had a son. When the mutant-energy-powered Collective invaded Canada, Alpha Flight, including Lou and Zuzha, was called in to stop him. They were quickly overwhelmed and apparently killed.

Mapleleaf is an attractive guy, but he utterly lacks the basic manipulative skills to use it to his advantage.

Sadler is a ridiculously good person. His devotion to being an ideal mountie (helpful, responsible, positive, eager to present a sterling example to the Canadian children, well-groomed, always smiling, polite, civic-minded, inclusive, etc.) is cartoon-like. His dialogue sounds nearly impossible to deliver, but he somehow manages it by being so convinced that those are the right things to say.

Being a pompous, well-meaning goody two-shoes Lou lacks experience in matters of the heart and related body parts. He behaved much like a deer caught in headlights when Puck expressed her interest.

Another weak point is that he hides the fact that he doesn’t have powers from everyone, even his team-mates. The reason for this uncharacteristic deception was never explained.

Lou’s relationship with his father is a disaster. He has trouble admitting that the original Major Mapleleaf is a downright obscure hero, and that not many Canadians remember him. He’s also terrified that his father might be revealed as the alcoholic, violent has-been he actually is.

Lou seems to be in complete denial about his father’s dismal state, and to still idolise him.

Mapleleaf is such a Lawful Good  type that he objected to the destruction of Plodex eggs. He will always operate according to the highest moral standards.

“I am sure I speak on behalf of everyone here, Dr. Langkowski, when I say — at your service !”

“Well, we’ve been flying for nearly two hours and I’ve run out of campfire songs.”

“I don’t mean to be a gloomy gus, but I am a bit disappointed. I just assumed any Plodex headquarters would be a little more, well, impressive.”

(While trying to defend himself against nano-creatures sent by Honey Lemon) “Really, miss — er, Lemon. I must point out to you… as a duly appointed member of the Canadian Royal Mounties, the willful and wanton destruction of my uniform constitutes a crime against a national landmark.”

Bonuses and Limitations:
Iron will is Form Function, but can only be used to resist moral corruption.

Advantages:
Credentials (RCMP, Low – I assume his rank is purely honorific), Misc.: Mapleleaf registers strongly as a good person to those who can sense moral alignment and purity (-1 CS OV/RV to detect this).

Although most characters in Alpha Flight v3 were metafictionally aware, this did little to influence the actual plot and was more a genre thing. 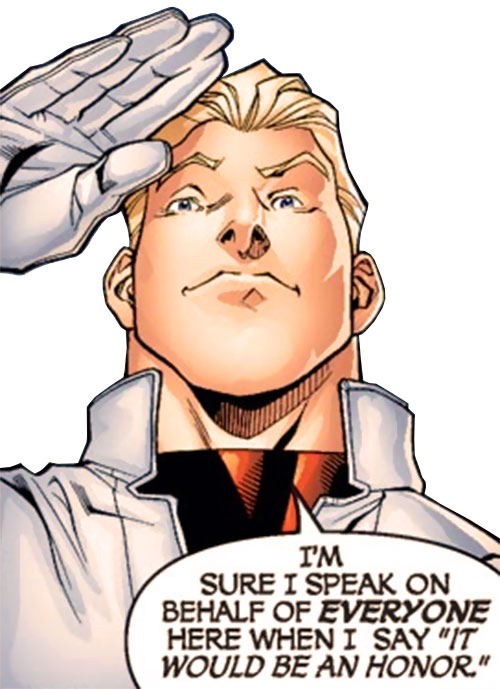 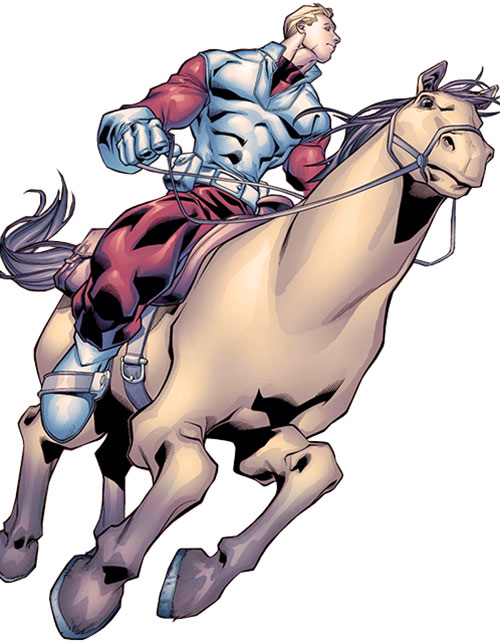 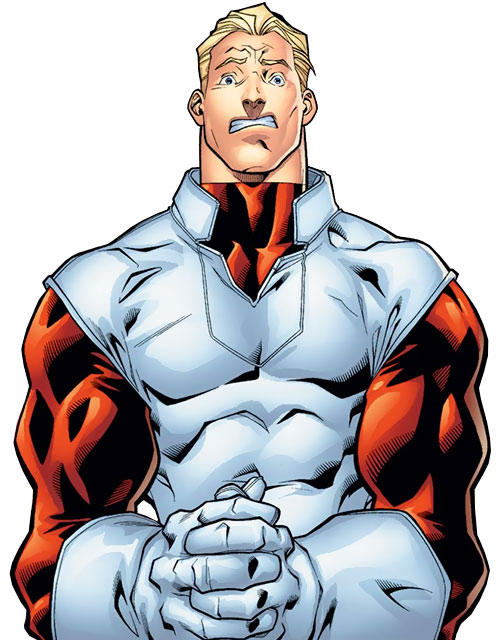 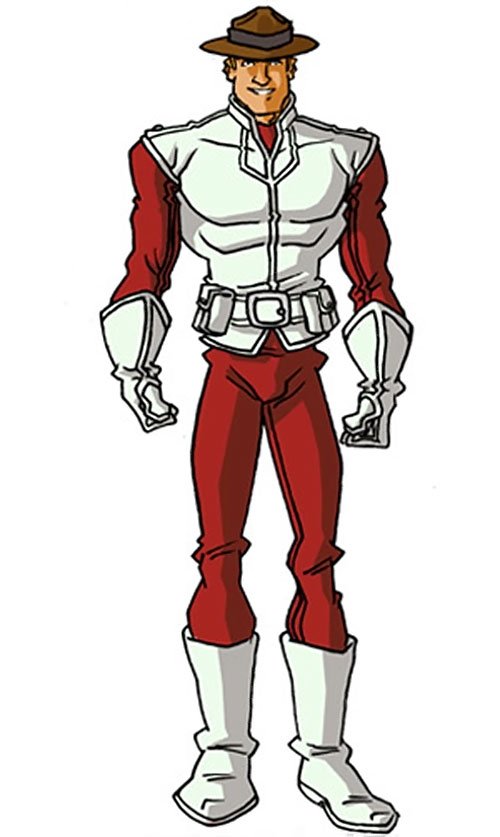