While he’s, at best, a mediocre poet, Bludd is an hardened military and mercenary veteran, and is quite ruthless.

He always wear at least a flak jacket and a good helmet, and has a taste (not to mention obvious skill) for experimental and exotic weaponry.

However, with his relatively low number of Hero Points  and his coarseness, he rarely achieves anything.

Major Sebastian Bludd got his start in the Australian armed forces, where he was part of that nation’s Special Air Service . By the time he acquired the rank that he’s identified with since, Sebastian had come to the conclusion that there was more money in mercenary work. Once his greed overcame his patriotism, he left Australia to join the French Foreign Legion .

That’s not all he was up to, however.

Sebastian also hired out his services to the highest bidder, and over the years he has found himself wanted in numerous countries for his crimes, as his employers are invariably the scum of the earth. Having no scruples whatsoever, the man will take virtually any job, you see, and has committed various heinous crimes in his day.

This, of course, has made him a singularly famous mercenary.

That’s how Sebastian wound up with Cobra. You see, Cobra Commander needed a special job done. Knowing Sebastian’s reputation, he thought Bludd would be the best man to assassinate Destro. Of course, since Destro was also involved with Cobra, this made things tricky. Cobra Commander had to keep Sebastian around until the time was right to act.

One major problem with the job was that Sebastian was forced to deal with Scar-Face, a Cobra courier, while he waited for his golden opportunity. Sebastian had a past with the man, you see, and it wasn’t a good one. This caused him no end of grief while he prepared to make his move. As such, he moved on Destro at the earliest opportunity – during Cobra’s assault on Washington D.C.!

However, Sebastian was ultimately foiled by the Baroness, who wound up paying for her interference when her H.I.S.S. tank exploded immediately after she stopped Sebastian from killing her love. In the chaos that ensued, Sebastian wound up getting captured by Grand Slam and Stalker. He was locked up in the G.I. Joe headquarters, along with Scar-Face – a fact that rankled Sebastian to no end.

In the company of the Baroness

Soon enough, however, Cobra Commander determined where the Joes were based at. He led a full force assault on the compound. As the battle raged, Sebastian escapee, killing both Scar-Face and General Flagg in the process. He took the badly burned Baroness with him – she’d also been taken to the Joe base as a part of Hawk’s master plan for beating Cobra.

He took her to the Bern Institute of Reconstructive Surgery in Switzerland. There a highly skilled plastic surgeon managed to put the heavily burnt terrorist back together – almost better than ever, in fact. However, Sebastian didn’t know that he’d been followed by the Joes. When he attempted to blackmail Cobra Commander shortly thereafter, the Americans managed to spoil his plot.

Sebastian got away, of course, but Cobra Commander was captured in the process. When the man escaped from Joe custody, he had Sebastian imprisoned. Sebastian remained under lock and key for quite a while. However, he was eventually freed by the Baroness. She needed him for her plot to assassinate the Commander, a plot that involved the Commander’s son, Billy.

The Baroness’ scheme ultimately failed, due to Destro’s interference, but luckily Cobra Commander never found out that Sebastian was also involved in this debacle. Knowing the man had his suspicions, however, Sebastian withdrew from Cobra for a time.

You see, it was believed that Destro was dead, and the weapons designer had blueprints for the Cobra Terror Drome in his Scottish castle. Serpentor hired Sebastian to pose as the laird of the manor and acquire the plans for Cobra, so nobody else could. When Destro returned, though, he managed to defeat Sebastian thanks to some timely assistance from Flint and Lady Jaye.

Sebastian dropped out of sight again for several years.He eventually reappeared after he’d been hired by a corrupt American General to prevent Snake-Eyes from rescuing one George Strawhacker from a Borovian gulag. His imprisonment there was vital to national interests, and as such, said General wanted Sebastian to kill the man rather than have him return home to ruin the work he’d done.

Sebastian failed in this himself. But he’d managed to work things so a Borovian troublemaker known as Metz would do the job for him once Snake-Eyes stopped him. The Joe knew it, too, but couldn’t bring himself to kill a (now) unarmed man in retaliation. With his job done, Sebastian disappeared again, only to turn up at the very end of the millennium when he rejoined Cobra.

Knowing Sebastian’s reputation, as well as Cobra Commander’s ingenious scheming mind, it’s assured that he’s up to something horribly nasty…

His second uniform was slightly more flashy, in that it was composed of a dark blue pair of trousers with silver racing stripes down the sides, a dark blue jacket with bright yellow trim, a yellow leather belt, black leather boots and gloves, a black helmet, and again, his trademark left eye patch. Of course, this uniform was adorned with a plethora of silver grenades carrying various yields.

Sebastian’s third combat outfit was a stark departure from the previous two. It consisted of a violet pair of trousers, a long sleeved black shirt with a violet vest (with red trim) on top, black leather boots with silver ankle guards and violet toe guards, a red groin harness (?), and a new helmet, this one being black with silver spikes running down the center, and a red jewel covering his wounded or missing left eye.

Upon returning to Cobra at the end of the millennium, Sebastian donned a slightly more sensible uniform, this one a variation on his second. It is comprised of a brown pair of trousers, a brown jacket with black trim, black leather boots, black leather gloves, a black leather belt, various black leather straps on his arms, chest and legs to hold his grenades, his black eye patch, and a black steel helmet.

Sebastian Bludd is a fighting man who has little, if any scruples. Giving up his duty to his country for the promise of riches, he’ll gladly do just about anything if the money’s right, even if it puts him at severe risk of personal injury. He has been described as a “total mercenary slime who’d think nothing of renting out his own grandmother as a tackling dummy.”

However, he’s no fool. His years of military and para-military experience have given this would-be poet a tactical mind like a steel trap. Thus, he gets things done when necessary.

Being nearly amoral, he does not hesitate to commit particularly vile actions.

In lieu of a quote, an excerpt from Bludd’s poetry :

When you’re feeling low and woozy
Slap a fresh clip in your Uzi !
Assume the proper firing stance
And make the suckers jump and dance !

A mercenary’s job is a heartless one
I’m a soldier for hire, like a pawn-shop gun
My ruthless tactics keep you on your toes
’Cause I fight ’em all, whether friends or foes !

Bludd used some special equipment at various points, including :

By Firebomb  — DCH conversion, editing and additions by Sébastien Andrivet. 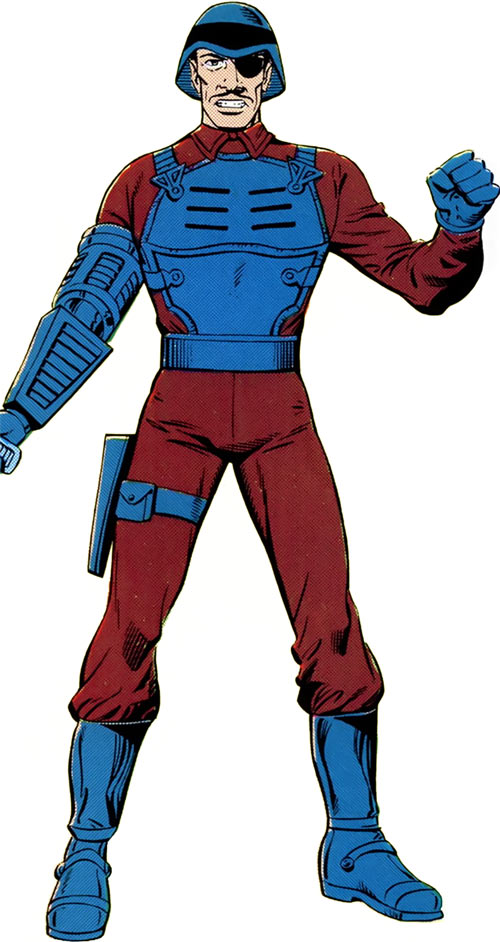