With practice, and following his encounter with the Beholder, who unleashed his full potential, his psychokinetic powers increased, enabling him to fly, project force fields, and creating solid force constructs.

Vance is also a competent combatant, and pilot.

Following his extended periods in suspended animation, Vance’s body is no longer able to survive unfiltered contact with air. This forced him to live within a suit which keeps him completely isolated. Should anything penetrate the suit, Vance’s skin begins aging at an accelerated rate, causing him extreme pain, and threatening to kill him should it not be treated and sealed.

He has had a few such suits. His original was tough enough to survive general use, but he replaced it with a stronger version, from a material found on Europa.

When this was destroyed, Krugarr cast an enchantment which protected him from exposure, allowing him to live without a suit.

Second skin from beyond

When this enchantment was ripped off, a costume which the Beyonder had created for him altered to cover his body, forming a replacement suit, which responds to his mental commands.

The suit protects him from exposure to air, fulfilling his need for air, food and water. It also provided him a measure of protection from energy attacks, edged attacks, and any attacks which require contact with his body or ingestion. The Beyonder’s suit also allows him to sense the locations of his team mates.

Martinex has built specially conditioned quarters for Vance, which allows him to survive outside of the suit within the confined quarters.

(See the Guardians of the Galaxy (31st century) profile for a complete history of the team.)

Vance Astrovik (who legally changed his name to Astro when he was 21) was born in Saugerties, New York. Joining the Air Force at 18, he went on to become the youngest person accepted into the astronaut training program.

Volunteering to pilot the first manned interstellar mission, Vance was sent out in the Odysseus I. The ship had no faster-than-light capabilities, so the trip to Earth’s nearest neighbour, a planet in the Alpha Centauri system, would take about a thousand years.

To protect him from the effects of aging, Vance was encased in a preservative bodysuit, and his blood transfused with a preservative fluid. He remained in suspended animation for most of the flight, apart from periods he needed to do regular maintenance, during which he also dictated histories of the 20th Century heroes.

Finally awoken in 3006 when the ship reached its destination, he learned humans had reached Centauri IV two centuries before his arrival. Unable to intercept his flight earlier, they offered him a hero’s welcome. During his sleep, the sustained dream-state activity had allowed his latent psionic powers to emerge.

At a loss for what to do, and stuck permanently within his protective bodysuit, Vance continued with his mission, pointless as it now was. He began a geophysical survey of Centauri IV. He encountered the native Yondu.

When the Badoon invaded in 3007, wiping out the humans and the native Centauri, the pair attempted to escape in Astro’s ship.

They failed that attempt, but were successful when they reached Earth, joining up with a couple of other survivors to form the Guardians of the Galaxy.

During his visits to the past, Vance sought out his younger self. The second time he took the opportunity to unleash the boy’s latent powers, despite the protests of his teammates. Astro hoped to ensure that he wouldn’t grow up making the same mistakes.

(It has been stated that this event caused the divergence in their timelines. However this is likely in error, since it has since been established that Earth-691 diverged from Earth-616 in, at the very latest, 1901).

When his suit was torn in the conflict with Taserface and the Stark, he survived the exposure long enough for Martinex to create him a new suit laced with adamantium . Martinex also altered Vance’s room into a sealed environment in which he could safely remove his suit.

The only other member of the team who could and did enter the room was Aleta. Having ended her relationship with Starhawk, she and Vance grew close.

On finding the planet where Captain America’s shield resided, Vance proved himself worthy, and was allowed to take the shield as his own. He adopted the identity of Major Victory.

Enraged, more than normal, by Starhawk when he abducted Aleta, there was little Vance could do about it, although they would later be reunited. Returning to Earth with the rest of the team, he suffered another rupturing of his suit, and barely reached medical facilities in time to be stabilized.

New teammate Talon asked his mentor, Krugarr, to help, and Krugarr placed a preservative magic field around Vance, allowing him to exist without his costume.

Reality-691 was then visited by the Beyonder when the entity discovered their universe. The Beyonder altered Vance’s costume to include a jet black undergarment, to remind him of his untapped potential.

After freeing Earth from enslavement again, he gave Captain America’s shield to be used as a symbol, believing it could do more good in that way.

Getting involved in the Beyonder’s confrontation with Protégé, Malevolence and Mephisto, Vance’s protective aura was destroyed by Mephisto, leaving him vulnerable to the damaging effects of the air.

While Vance aged quickly, the costume the Beyonder had given him sprang to life, enclosing him in a protective suit, similar to his original, before the exposure could kill him.

His decision to ally with Ripjak questioned by the rest of the team, Vance had to step down from leadership. He let Charlie-27 take over. Having time free, he and Aleta analysed his costume, learning it wasn’t alive as he’d feared.

It’s sometimes unclear whether or not his mouth is covered by his suits. Sometimes it looks like they’re being left free, but this doesn’t make sense. If exposing his skin to air causes him to age rapidly then I can’t see why the inside of his mouth wouldn’t have the same problem.

I’ve just assumed that this is due to artistic interpretation.

There’s also a problem where he retracts his ’beyond‘ suit so that he can kiss Aleta. The only possible explanation I can think of is that there was still a thin layer of it present.

(By this point the plotting, and logic, on the series was getting fairly dodgy.)

Emotional and earnest, Vance is guided by his feelings, and his sense of justice, and can often be short-tempered or moody. He often pushes ahead with what he believes to be right, trying to impose his 20th Century values on his team mates, often causing friction.

He has always had Captain America as a role model. This intensified when he acquired the shield, as he felt he had to live up to what he saw as Captain America’s ideals. He frequently speaks in long-winded platitudes, and melodramatic brooding, which can get tiresome.

The long lonely waking periods during his millennium-long journey had a cumulative effect on his sanity. While he did recover with social contact afterwards, there seems to still be a certain degree of instability, primarily leading him to become obsessional about certain ideas (such as recovering Captain America’s shield).

Furthermore, he sometimes ignores his friends’ feelings as he follows his obsessions.

It also causes him manic-depressive bouts, shifting him between excitedly leading the team and melancholic brooding about his isolation.

“You Badoon never learn, do you ?! So long as men breathe, they will yearn to be free ! And free men would rather die than be enslaved !”

Rancor: “Give it up Guardian ! There is no way that you can win ! Our powers are far superior !”
Major Victory: “That may well be, Rancor ! But you will never have our faith, and as long as we are able to believe in the righteousness of our mission, there is no way we can lose !”

Bonuses and Limitations:
All powers are Contingent on Telekinesis (-1).

I lack some of his older appearances.

Prior to his encounter with the Beyonder, his only powers were Mental Blast, and his suit didn’t have the Detect power.

For a time he carried Captain America’s shield, during which time he had the Weaponry (Missiles) Power, at 08 APs, Contingent on his Mental Blast :
STEEL-VIBRANIUM SHIELD [BODY 35, EV 03 (04w/STR, 05w/Martial Artist), Gliding: 02, Kinetic Absorption: 10, Recommended STR 02, Note: OV/RV bonus when using the Block Manoeuvre is 2 APs, Note: the OV bonus for the Shield Cover Manoeuvre is 2 APs, Bonus: Kinetic Absorption also reduces APs of Knockback and Falling damage, Limitations: Gliding only adds to throwing range, Kinetic Absorption requires an Automatic Action to use as Captain America must brace himself and he cannot use the shield as a weapon in the same Phase that he uses KA, Advantage: Hardened Defenses].

For a while he had an enchantment cast on him by the Sorceror Supreme, Krugarr, which enabled him to survive without his suit, but this was ripped away by Mephisto during the encounter in the Beyonder’s realm. 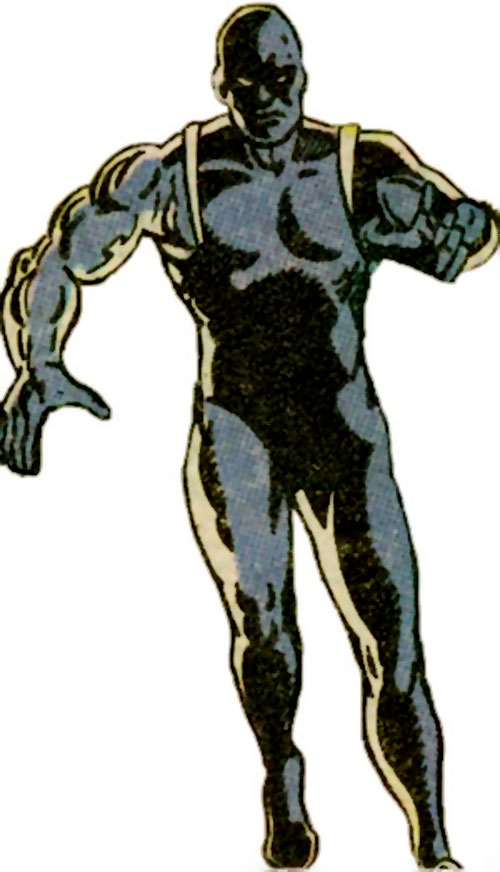 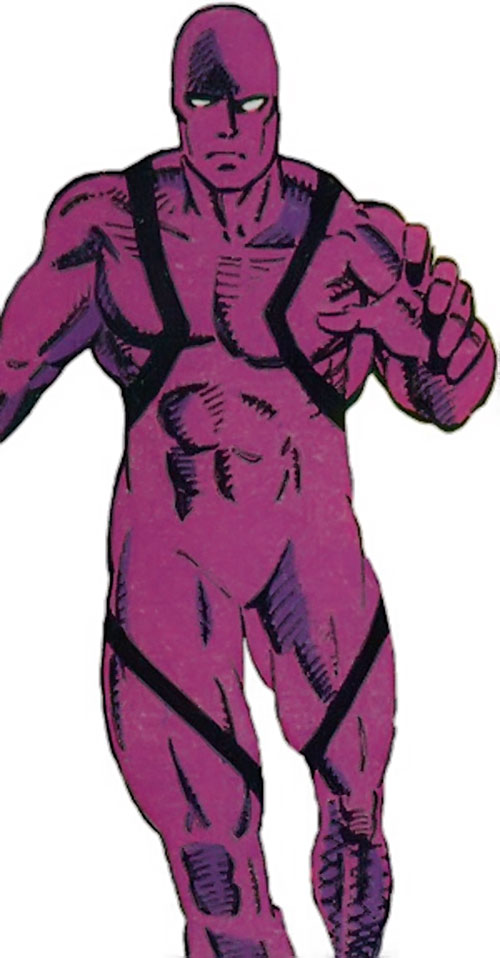 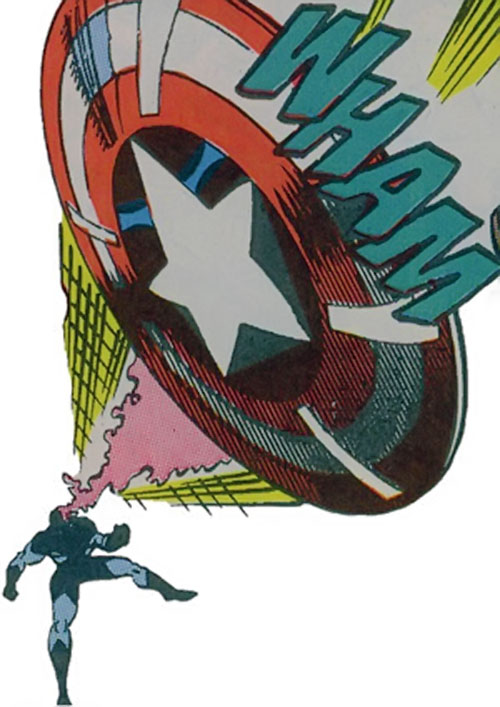 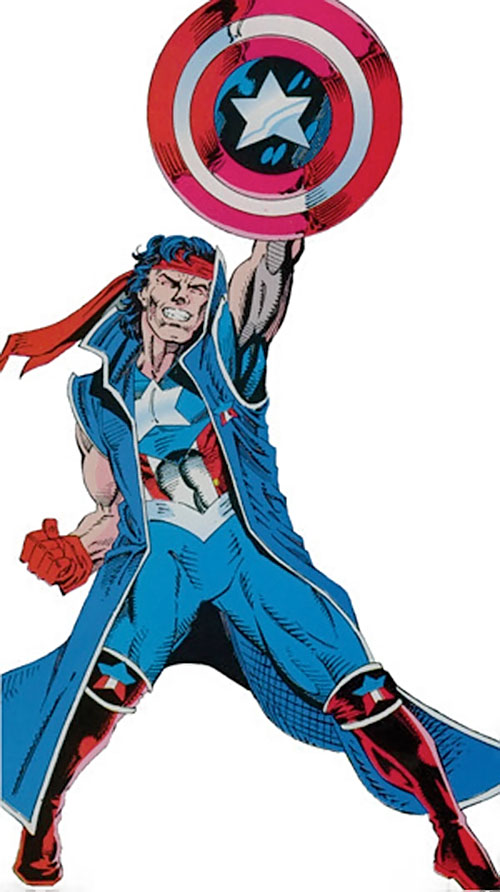 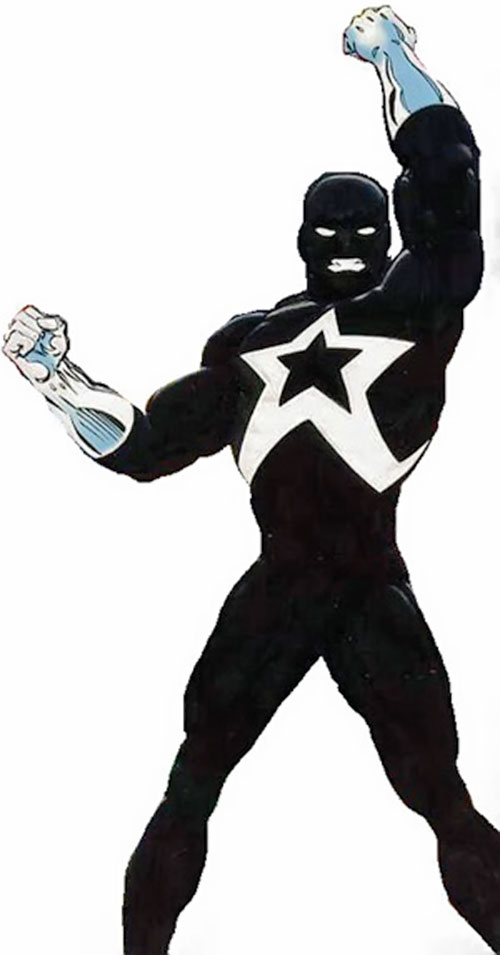 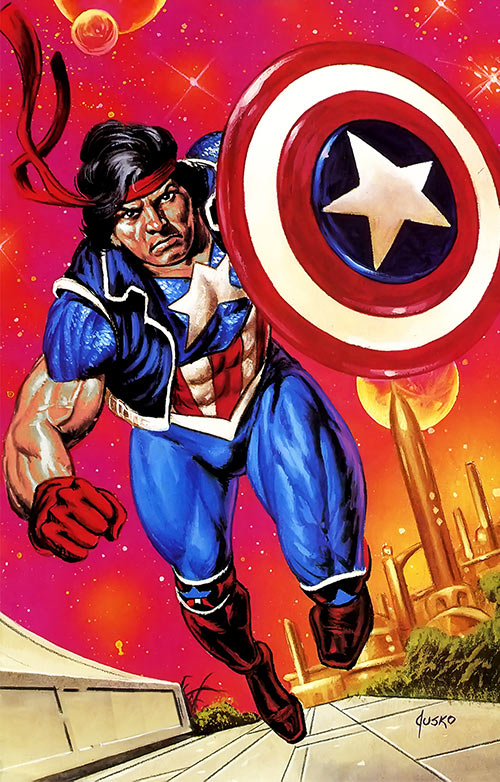