Major Victory was a member of the Force of July.

This was a group of US hardliners who repeatedly fought Batman and the Outsiders during the 1980s.

Major Victory wore a suit of unrevealed origin provided by the ASA. It increased his strength and durability to superhuman levels. At maximum exertion Victory’s enhanced strength was sufficient to :

The costume also gave Victory the ability to fly at speeds close to those of modern attack helicopters. Whenever Victory used his suit’s powers he was surrounded by a star-shaped nimbus, suggesting that said powers derived from an energy field of some kind.

Vickers was a well-trained combatant in excellent physical condition. He proved himself a capable threat even when his suit was disabled.

But unfortunately for the Major, these abilities could not overcome his tactical weaknesses as a fighter and a leader. 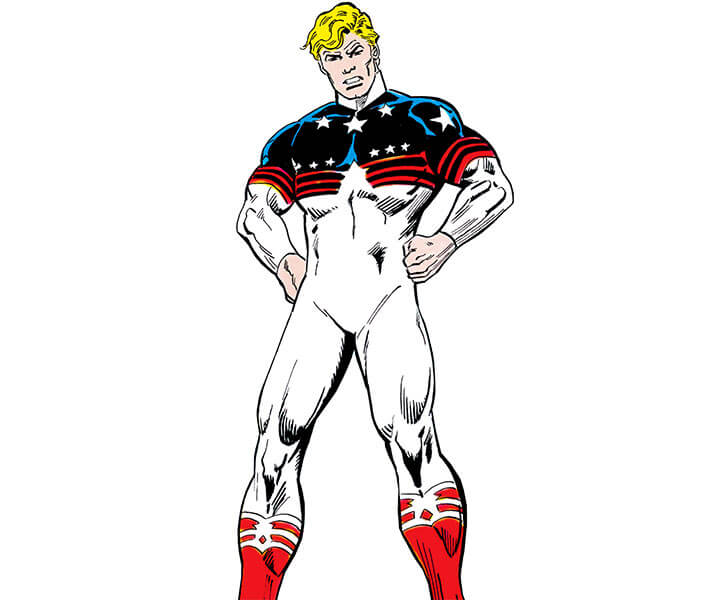 For the history of the Force of July, see our main article.

The following sections start where the Force of July History section ended.

One is the Loneliest Number

The devastated Major Victory, the only survivor of the Force of July, became a lone covert operative for a while.

Vickers eventually joined the Suicide Squad. He served on the team during their trip to Apokolips, and through the War of the Gods  .

Shortly after the latter conflict, Victory left the Squad. But he still maintained some loyalty toward it, particularly Amanda Waller, whom he had come to respect. He even defended her against other government agents despite the suggestion that she was partially responsible for the Force of July’s destruction during the Janus Directive  .

Major Victory then became the head of the Captains of Industry, a privatized superteam devoted to protecting the industrial sector from “eco-terrorists” such as Firestorm.

However, the Captains of Industry were never deployed. Major Victory went back to freelance government service.

Major Victory’s final mission was joining the team of government operatives sent to Parador to investigate Eclipso’s activities in that country. As with almost every other member of that team, he was cornered by Eclipso-possessed creatures and died in battle. 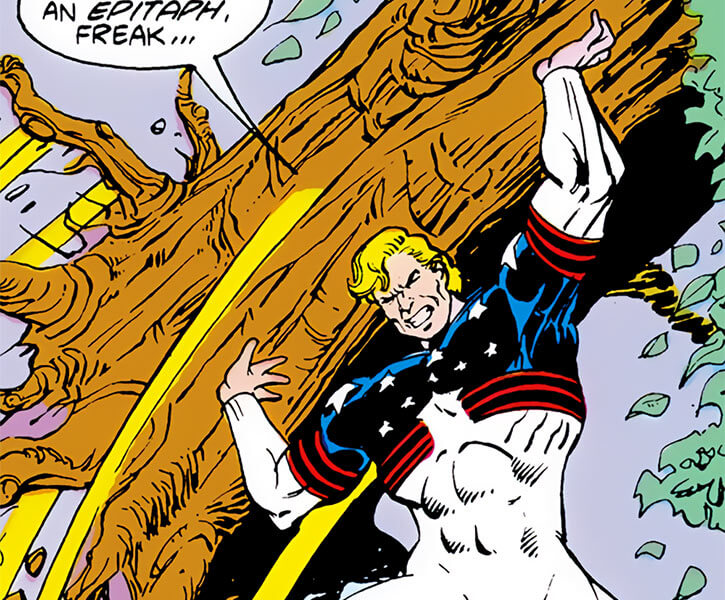 Snatching Victory from the Jaws of Defeat

The government has invested at least one other person with the Major Victory identity after Vickers’s death.

He was a cypher in his first appearances, doing little more than participating in publicity events. He also was temporarily neutralized by the Hollow Men, who were eventually dealt with by Superman.

Either this Major Victory or a successor of his next showed up in Blüdhaven after it was devastated by Chemo during Infinite Crisis.

Major Victory and the rest of Freedom’s Ring were eventually incorporated into an ad hoc government task force during the battle of Blüdhaven, pairing him with many other government superagents.

Freedom’s Ring fared even worse than the team that inspired it, dying in battle even more quickly and pointlessly than their predecessors.

Major Victory died soon afterward when he attempted to order teammate Major Force to disengage from combat. The enraged Force responded by ripping Victory’s arm off and bludgeoning him to death with it.

Another brick in the wall

Regardless of who was in the costume, all of them had similar abilities, appearance, and attitudes as the original did at the start of his career.

The only notable differences were:

The new Major Victory also once fired energy blasts from his suit’s gloves. But since he never used that ability again in any of his numerous subsequent vicious fights I am assuming this was an authorial error. 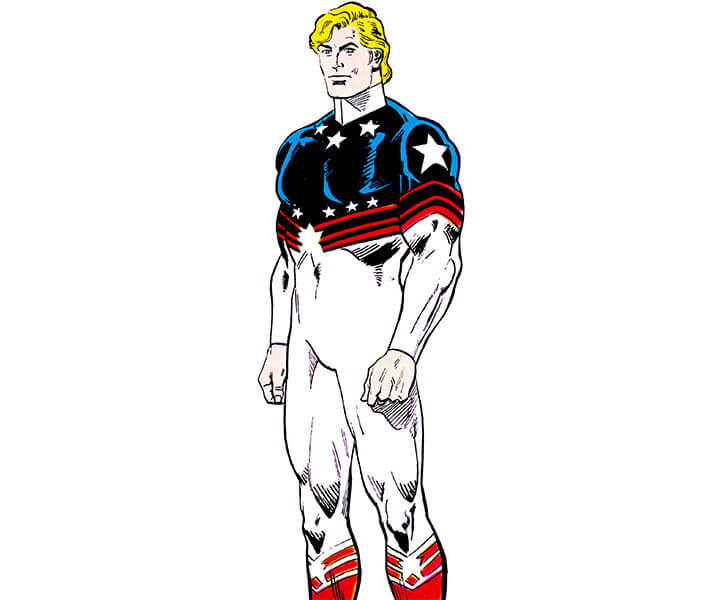 His form-fitting costume was a patriotically-colored white bodysuit with a dark blue upper torso, leaving the head and hands exposed. The blue section was lined with red stripes and complemented with a few evenly spaced white stars on the chest. He wore red boots topped with white stripes and a white star on the top front.

When Vickers used his suit’s powers, it glowed brightly. It formed an aura on the shape of a five-point star with one point projecting upward from Victory’s head and the others radiating out from his sides.

The last Major Victory’s costume had black sleeves instead of white and a panel of dark blue running up the inner thighs and across the groin, but otherwise he appeared identical to Vickers (though his hair changed color from blond to brown during the series, probably due to a coloring error).

This version of the costume did not radiate a visible aura when its powers were used. 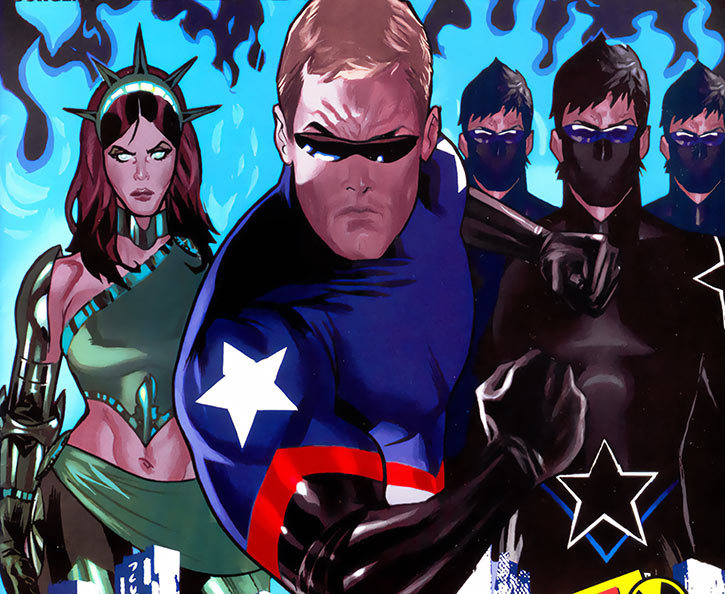 Vickers took the idea of blind loyalty to the state to its extreme. He considered any action taken by the American government or in support of that government to be absolutely correct.

Major Victory had no compunctions about killing anyone he saw as a subversive or an enemy of the state. He enthusiastically supported several would-be dictators in bids to control the United States – in the hopes that they would provide a stronger government for “true Americans.”

This dedication also expressed itself in Major Victory’s xenophobic and racist attitudes. Though he was reasonably accepting of foreigners whose countries were on good terms with the United States.

He turned this fanatical devotion inward as well, evaluating himself solely on his ability to serve his country’s government.

Confronting the idea that the government was not always right, or that he might fail in service to it, profoundly troubled Vickers. At the same time, it also gave him more confidence to disagree with government orders. At one point he flat-out refused a general’s orders to return his suit.

Though Victory was less than thrilled when he was assigned to serve among the criminals and malcontents of the Suicide Squad, his time there provided two notable moments of personal growth.

Victory sometimes worried that his worth was solely in his suit’s powers. Yet he proved otherwise when he continued fighting capably on Apokolips against seemingly-hopeless odds. Even after attacking parademons broke his suit.

Part of his resolve at that moment was inspired by Vixen (Mari McCabe)’s defiance in those same circumstances. Seeing something to respect in his teammates (whom he had previously disdained in general) may have contributed to Victory’s later relaxing of his judgmental attitudes.

By the end of his life, Vickers had softened in his perspectives and his drives. He still sounded off like a jingoistic mouthpiece, but his heart did not seem to be in it.

With Vickers being an empty shell of a man at that point his death in battle may have been a mercy of sorts. It gave him a chance to die like the warrior he hoped to be. Even if his death went largely unnoticed and unremarked by the very government he had striven to serve.

“Your friend needs your help, does he ? Guess even subversives can feel loyalty toward their fellow travelers   ! But you’re finished, traitors — you can take that from Major victory and the Force of July ! Any last words, ‘comrade’ ?”

(Charging at Katana) “Here’s where I pay you people back for Pearl Harbor, dragon lady   !”

Miscellaneous Drawback (see “Leading With His Chin” below), SIH (Perceived enemies of the US government).

MAJOR VICTORY COSTUME [/STR/ 14 /BODY/ 10, Flash: 02, Flight: 08, Limitation: Flash is automatically activated when using the suit’s Flight or STR (either for lifting or EV) and cannot be activated in any other way (-1FC)].

Though Major Victory’s hands and head were not covered by the costume, they did not seem to be particularly vulnerable to attack (beyond the inherent vulnerability of blows to the head) and Victory was able to punch things with superstrength without breaking his hands. Therefore the costume is assumed not to have a Partial Coverage Limitation.

The suit’s defensive qualities may have been part of an aura generated by the costume as the source of its abilities (a theory circumstantially supported by the glowing effect caused by any use of the suit’s powers) and thus in effect even over portions of the wearer’s body not directly covered by the suit’s material.

While later appearances showed the Flash Power diminishing to 01 and eventually disappearing, the protective quality likely remained the same. 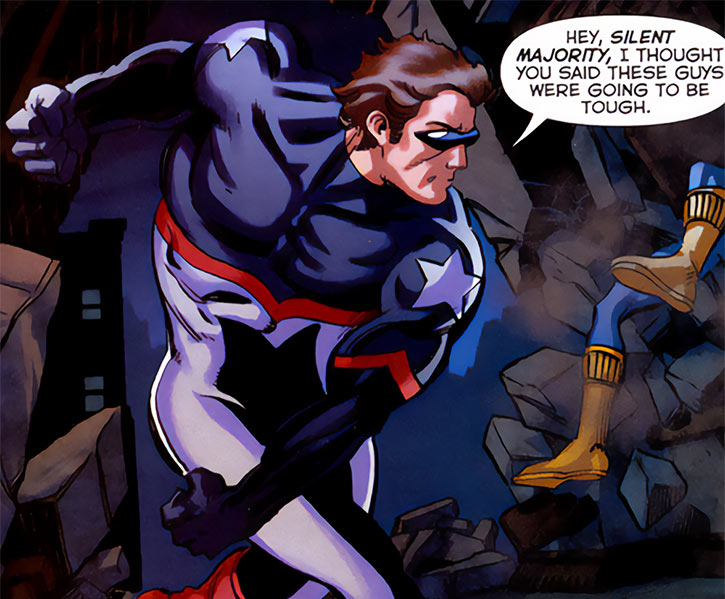 Leading With His Chin

For the most part, this is represented in role-playing by his common use of combat Maneuvers such as Pressing the Attack (which increases his offensive ability at the cost of defensive deficits) and by spending his Hero Points exclusively on AV/EV instead of OV/RV.

He is also very likely to spend the maximum number of HPs possible at the very start of any fight, which makes him initially appear somewhat more powerful than he actually is but also means his performance degrades rather quickly in extended fights or when he has several battles in close succession.

For instance, many of his feats of strength took place at the start of fights and seemed to involve HPs.

Major Victory also suffers a -2 CS to his OV versus Maneuvers that redirect his attacks or otherwise use his own strength against him, such as Throws and Dupes.

This imprudent mindset extends to Major Victory’s strategies as well. He tends to have his team members confront others on a one-to-one basis even when he has the opportunity to deploy more people and outnumber the opposition. There is also a noted failure to coordinate his people’s efforts.

This poor tactical management is the reason that Major Victory lacks both the Leadership Advantage and the Military Science (Command) Skill (unlike most leaders of superteams in the DCU) and probably goes a fair way toward explaining the string of failures that defined the Force of July.

The many losses Major Victory suffered, in terms of both his numerous defeats and the deaths of his teammates, in conjunction with his crises of faith in himself and his country, eventually tempered his fanaticism but also weakened his resolve.

By the end of the Janus Directive and his joining the Suicide Squad, his Irrational Hatred had diminished to Minor but his Spirit had dropped to 04. Near the end of his life, when he was building the coalition to invade Eclipso-controlled Parador, the IH was gone entirely and his Spirit was a mere 03.

Likewise, Major Victory’s profligate expenditure of HPs in tandem with one losing encounter after another (even when he would win some of his initial battles, the final results tended to be failures) caused his HP total to steadily decline.

By the time he joined the Suicide Squad, he only had 35 HPs. When he took the mission to Parador, Major Victory was down to a meager 20 HPs. This HP loss was mitigated to some degree by his learning to spend his remaining HPs more effectively. 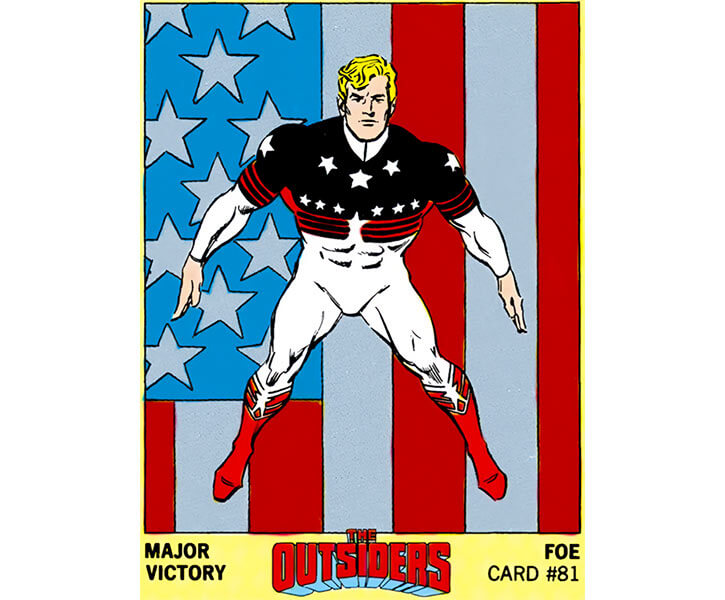 Force of July jet [Same stats as a private jet].

* Without Defensive Roll.
**With costume.

Major Victory has a clear pattern of heavily front-loading his Hero Points expenditures during a fight, almost always on offense. This’ll make him seem real powerful for a bit, then he’ll run out – and thus likely fail against credible opposition.

He also clearly overuses his All-Out Attack and Power Attack Advantages, even when it’s unadvisable.