As Mako, Drumm possesses tremendous strength, physical durability. Also, he is physically intimidating due to his shark-like appearance. He is strong enough to punch through concrete and throw trucks at opponents. Being half-shark, Mako’s teeth can easily bite through very strong substances. If they break, they can in fact grow back at a fast rate.

His skin provides relatively strong body armor against physical injury. It can barely be penetrated by metal blades. Mako can also presumably see clearly underwater. He also possesses amphibious traits, such as the ability to deftly swim underwater, as well as breath under water. He has a great sense of smell allowing him to track down opponents (i.e. lunch).

Mako apparently suffers through serious cravings to consume human blood. This may in fact be part of a necessary diet that enables him to survive. When he scents blood in combat, he tends to become an even more savage monster intent on eating his opponent.

Real sharks have further senses. Yet Mako does not appear to have enhanced hearing or extra motion detection abilities.

Choosing the Army over jail, career criminal Lou Drumm was mauled by a shark at ground zero when an experimental nuclear bomb was detonated. Transformed into a being who was half shark/half man, Drumm took the name Mako. After his release, he again took up a life of crime.

Drumm became one of the more ambitious members of the Vicious Circle as Mako. He was one of an upstart group that brutally attacked and maimed the superhero SuperPatriot, nearly killing him.

Mako continued to work for the Vicious Circle and later the Covenant of the Sword. He clashed with Dragon and with SuperPatriot, who had been rebuilt as a cyborg. As a Vicious Circle man he was hired out as an assassin for General Sucarno LaSalle, but was defeated by Star and nearly died in an explosion.

A shark must keep moving

Months later he was again spotted in Chicago, mauling and killing police officers in an attempt to kill Dragon. Other Chicago-based superhumans stopped him. Drumm tried to escape during a huge jailbreak, but was electrocuted.

Nevertheless, he was soon back with the Vicious Circle. They sent him against Doctor Brainerd to prevent the doc and his students from challenging the Circle. Dragon stopped the battle, but Mako and his colleagues escaped.

Mako was next kidnapped by Dragonlord (Warlord Kmodo), but escaped. As he fled he fought Kmodo, giant lizards, Donatello (of the Teenage Mutant Ninja Turtles) and Donatello’s sensei Splinter. Once clear he was hired by Dr. Nirvana to join Frightening Force, which attacked the heroic Freak Force. Mako was defeated by Joey Finkleberry and arrested.

Mako ended up fighting the Maxx in unclear circumstances, as the Maxx sought a mean to free his claws – which had been accidentally glued together. The fight resulted in an accidental explosion, but Mako left before Dragon could swoop in and arrest him.

In a possible future, Mako will be killed by Sorry the Nearly Man.

The shark is a very deadly beast

Mako was next seen in the post-apocalyptic Savage World. It was ’created‘ when the Savage Dragon killed the time-traveling villain Overlord while still an infant (in Savage Dragon #75). During this time Mako was working for Atlantis as a mercenary.

The Savage Dragon got captured by the Atlanteans, and put to work in a mine. A slave revolt started and several powerful slaves were liberated, forcing the Atlantean King to summon powerful sea beasts to quell the rebellion.

However, Mako took the opportunity to kill the Atlantean King, whom he did not like. The undersea ruler alos planned to destroy the surface world, which Mako could not agree with. Mako, who thus had saved the world, then went after the fleeing Dragon. But he was was apparently eaten by the greatest, summoned sea beast himself, allowing the Dragon to escape back to the surface world (Savage Dragon #081).

However, this wasn’t the end. Mako soon thereafter showed up on an isolated, tropical island with the heroine Dart, keeping her safe under the false pretense that they were the last humans left on that world.

Mako had met Dart during a massive breakout in a penitentiary. She and Star had tried to stop the escaping inmates. Both heroes were defeated and one superfreak tried to rape the unconscious Dart. But Mako, who had seen her sister raped once, saved Dart by killing the superfreak. He then had to flee with Dart, being now hunted by the criminal underworld and the law alike (Savage Dragon #100).

Somewhat later, Mako told Dart the truth about civilization. It had not been wiped out after the Martians invaded. The world was teeming with humans, now liberated from the tyranny of Cyberface, and well on their way back to the pre-invasion state of life again (Savage Dragon #094). Dart eventually decided to leave Mako.

Mako, enraged, tried to hold Dart hostage when the Savage Dragon arrived. Mako and Dragon battled and Mako, mistaking someone behind him for the Dragon, lashed out and accidentally killed Dart. He blamed the Dragon for this. He then left for the sea wowing to bring revenge on the Dragon for having cost him everything (Savage Dragon #112).

Mako is a very muscular man with shark-like features. He is grey in color and has no hair, but solid black eyes. While on land, he can be seen in a mechanical contraption of some sort, or just in a pair of trousers, while in water he will wear a light blue body suit, covering all but head and fingertips, with vertical, yellow teeth drawings.

He gives the terrifying look of a blood-thirsty, murderous Mako shark on two legs with several rows of teeth looking for another meal!!

Mako is a career criminal, and has always lived a hard life. He is an excellent follower and henchman, ruthlessly following orders.

He does love violence in all its forms, is a braggart and also overconfident. He fits perfectly with the most brutal powerhouses and murderers of the Vicious Circle. He seems particularly intent on defeating SuperPatriot and the Savage Dragon, both of whom have previously crossed his plans.

After his transformation into Mako, he reacts much like a shark. He likes the taste of fresh blood and considers most humanoids fresh meaty meals. He will go berserk in combat, especially when blood frenzy kicks in as he scents spilled blood. During blood frenzy he will talk in single words focusing only on the hunt, and the closer he gets to his prey, the more stimulated he is.

Mako is not above attacking/eating his fellow villains if they cross him.

Opponents and innocent bystanders are usually killed by biting and swallowing off their heads. If he has more times, he will eat limbs as well. The Savage Dragon refers to him as a whacked-out blood junkie with a mean streak.

He managed to settle down for the first time in his life with Dart on an isolated, tropical island, by lying to her even if saving her seems to have been an altruistic act. For a couple of months he was a considerate and protective man. Dart’s influence was positive and Mako even saved the surface world from destruction by the Atlantean civilization.

After he accidentally killed her, he refused to take responsibility for his own actions, left an angry man, wowing revenge on the Savage Dragon, and probably returned to his old, vicious ways.

(About SuperPatriot while drooling) “I don’t care why. I just wanna get me a second helping on the sucker ! His arms and legs were good eatin’ !”

(Mako attacks SuperPatriot) “Why if it ain’t my old teething toy, the fighting fossil ! Or should I call you… lunch !”

“Your flesh will melt over my teeth like Jell-O !”

“You ducked on purpose, mauve-boy ! Now I’m gonna do you slow !”

Maco may replace King Shark in the story of Superboy’s adventures. Most of his background may also be dropped in as well replacing Super Patriot with John Henry Irons’ heroic Steel identity. Or for a more ambitious campaign, Henry “Hank” Heywood III aka Steel II of Justice League Detroit era notoriety.

Steel II can be a member of the newly formed Teen Titans West depending on how one accepts or denies prior DC storylines, discontinuities, and infamous reboots.

An alternative is to make Mako a very classic villain by having him replace old Superman/Green Lantern foe, the Shark. This version of Mako would be perceived as a greater threat if he also had the Aura of Fear power as well as an aura of yellow as these were so vital to that version of the Shark.

Using Mako instead of the Shark gives the character added complexity in form of a previously human personality.

It is possible that Mako also has Minor Irrational Attraction to fresh blood and meat. 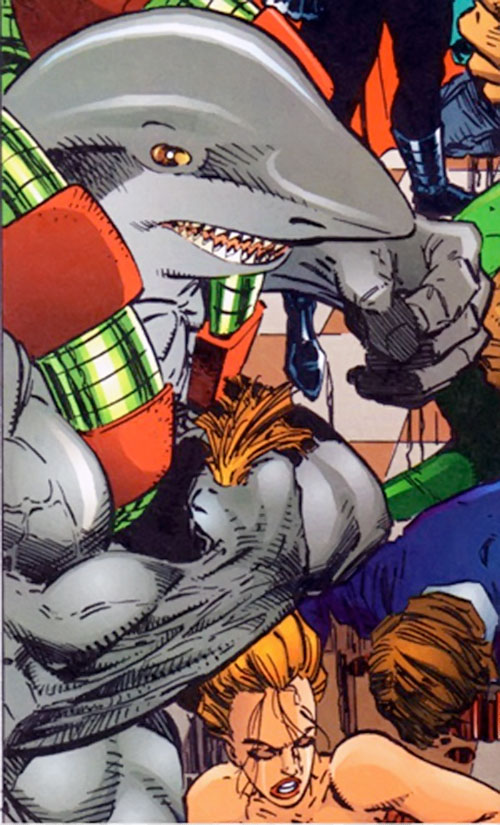