Donalbain was a successful, wealthy businessman.

He also was described as a world-famous sportsman. His sportive skills included shooting and horse-riding.

However he had psychological issues. These included a phobia of being touched and a vicious temper. He never hesitated to physically threaten people — or have his hulking enforcer Zabo hit them — if he thought he could get away with it. He occasionally carried a whip, and many of his henchmen were killers and criminals.

Some have theorised he may have helped with the development of the Cat suit. But there are no genuine clues about him having such skills.

During the early 1970s, businessman Mal Donalbain was financing the research of academic Dr. Joanne Tumolo. Tumolo’s work was exotic – something about developing the power of women to grant them superhuman abilities. But she was clearly making progress, even reaching the stage of human experimentation.

Dr. Tumolo wanted to work with her assistant Greer Nelson. But the violent and authoritarian Donalbain instead imposed one Shirlee Bryant. Donalbain also had Bryant test her abilities outside of Tumolo’s control. Lastly he outfitted Bryant with a yellow, clawed, cat-themed costume… plus a mind-control collar.

(Donalbain is the one who called this costumed persona “The Cat”. Greer Nelson would keep that name.)

Apparently, Donalbain was driven by sexual fantasies about being the absolute master of a cadre of superhumanly strong and healthy, statuesque women. He also intended to open a chain of health emporiums run by such enhanced women, enthralled by his mind control collars.

Dr. Tumolo discovered his plans, and saw Bryant die during a test she hadn’t authorised. Donalbain had his henchmen steal her notes then blow up her workplace, seemingly killing Dr. Tumolo.

Beware ! The claws of the Cat

Being stronger and faster than expected, Greer Nelson (calling herself the Cat) body-slammed a henchman into Donalbain, triggering his phobia. The Cat escaped as the hulking enforcer Zabo was disciplining the hapless henchman.

Nelson eventually defeated all of Donalbain’s men. She closed in on the industrialist to avenge Dr. Tumolo. While attempting to kill the Cat, Donalbain accidentally shot out the lights. Realising that the Cat had perfect night-vision and was going to touch him while he couldn’t see anything, the phobic industrialist abruptly committed suicide.

The Cat then had to depart. The building was being consumed by a fire accidentally triggered whilst she was fighting Zabo.

Mal Donalbain may have been played by Nicolas Sarkozy . Seriously, it’s striking.

Less anachronistically, he might have been loosely inspired by promoter Leo Seltzer .

Donalbain is a haughty psycho looking down his nose at the whole world.

His terrible phobia has warped his sexuality. He wants to control fantasy women with great physical power to quench these proclivities.

He hates being frustrated by anybody, and will threaten at the drop of a hat.

“You idiot ! You touched me ! I’ve warned you a thousand times never to touch me — NEVER ! I’ll teach you a lesson you’ll never forget. Zabo ! Reprimand this lout !”

“Don’t crowd me, Dr. Tumolo ! This entire experiment is mine ! My money paid for this equipment and your time ! You do it my way, or the deal is off !”

“I shall be the spiritual and physical master of a grateful nation of perfect physical specimen !”

Source of Character: The Cat v1. 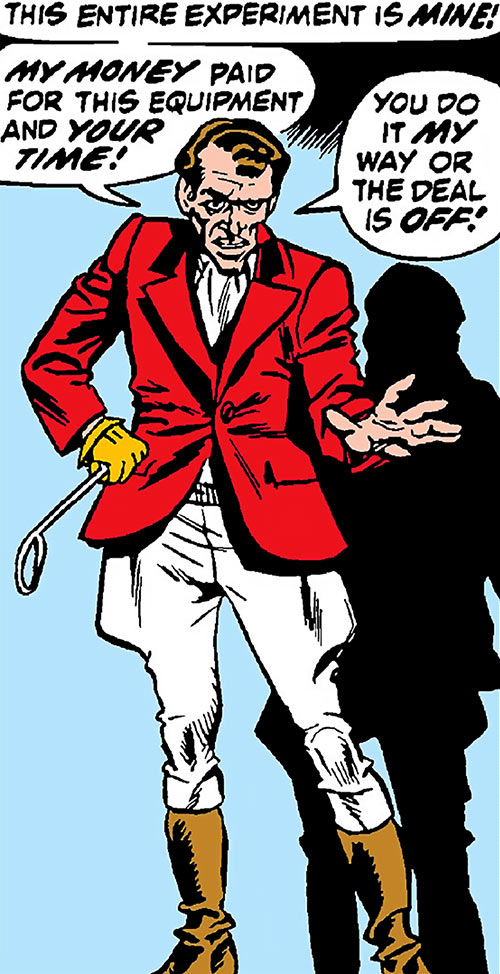