Her body contains, or is possibly composed of reserves of hellfire. This gives her a naturally high body temperature, and she may project hellfire at her enemies.

Malevolence is superhumanly strong. Furthermore she has no need to breathe, can fly, and can pass through solid objects with no problem.

She can also detect when she’s being lied to. She can drain the life from multiple opponents within range, and can expel the energy in a concussive blast.

The daughter of Mephisto, Malevolence was dispatched to become matriarch to Protégé. Protégé was the powerful god-child created to lead the Universal Church of Truth. Malevolence was set adrift in suspended animation within a space craft, set to awaken when the time was right.

Her sleep was interrupted slightly early, when the Guardians came across the derelict ship, with a faint life sign within. Wakened, she lashed out, attacking the Guardians, focussing on Aleta when she recognised her as the main rival for matriarch. Convinced by Starhawk that she had been awakened early, Malevolence left, intending to deal with them later.

Locating Force, a mercenary group that had previously clashed with the Guardians, she appeared on their craft. Malevolence commanded that they obey her. Most of them resisted, and she handily dealt with them. But the opportunistic Brahl offered to deal with her. Thus, she appointed him the new team leader, as she forced their cooperation through threats.

Travelling to Homeworld, she challenged for the position of matriarch, easily dispatching her competition. Learning that the Guardians were approaching, she dispatched Force to deal with them. But it wasn’t long before Aleta appeared, soon followed by Brahl. Brahl informed her that the rest of Force had allied with the Guardians.

Malevolence was forced to battle Aleta, and appeared to be losing, until Starhawk reabsorbed her and left. Winning by default, Malevolence was nevertheless disgusted when Protégé took the Guardian Replica as his playmate, and ordered his forces to search for Starhawk and Aleta.

Malevolence went to work manipulating Protégé to be more dictatorial and tyrannical. This often came into conflict with Replica’s advice to him. When she discovered the shapechanger had been impersonating Protégé, she jumped at the chance to tell him, and when Replica fled, Malevolence prompted Protégé to kill her, barking orders at him.

He resisted, striking Malevolence and letting Replica get away.

She and Protégé were taken captive by the powerful, other-dimensional entity known as the Beyonder, who saw them as curiosities, and whose powers were activated by the Beyonder’s thoughts, which Protégé could not initially duplicate.

They are freed when the disguised Mephisto tricks the Beyonder into using his powers, which Protégé is able to duplicate. Protégé frees them and takes on the Beyonder, quickly come to match his power level.

When the Beyonder apparently flees, Mephisto begins to try to gain influence over Protégé. But his machinations are interrupted by the Beyonder, who pulls the Guardians of the Galaxy into his universe to confront Mephisto and Malevolence. The pair kept the group at bay, while the Beyonder and Protégé were teleported away.

They learn that the two were taken by the cosmic powers, who put them on trial for misuse of their powers. When Mephisto and Malevolence are pulled into the cosmic realm where the trial takes place, Protégé realised they were trying to manipulate him, and banished to an unidentified location.

Aggressive and quick-tempered, Malevolence isn’t as subtle as she believes herself to be. She simply relies on her power and force of personality to get people to do what she wants.

She has a very short temper, often flying into a violent rage, and her time as Protégé’s matriarch was a constant battle to maintain her composure.

“So the jackals gather ’round the lion, do they ? Then be warned, fools, I shall not be stopped, not until the child is mine !!” 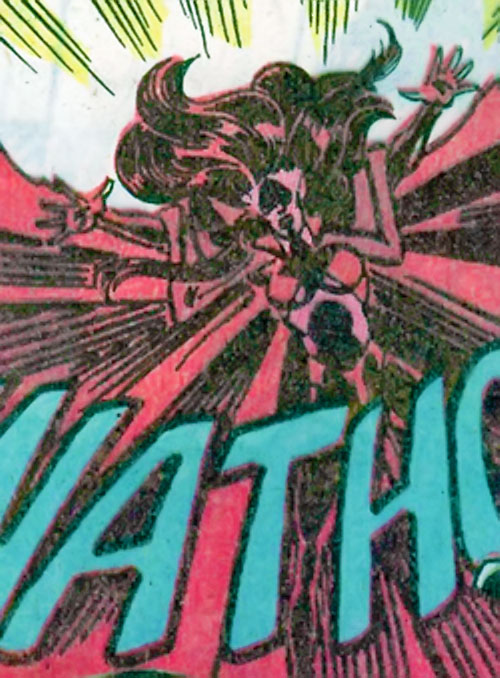