“Through all of Eternia’s long history, there has been a Man-At-Arms to uphold the cause of goodness.”
– Skytree, the oldest living being in Eternia

Man-At-Arms appeared in the 1983/1984 Filmation animated series He-man and the Masters of the Universe. A genius inventor. Man-At-Arms is responsible for all the weapons, vehicles, and equipment used by the Royal Palace.

For more context, we suggest that you first read our primer to the Masters of the Universe setting.

Man-At-Arms, despite his name, is foremost an inventor. He is King’s Advisor, Weapons Master, Warrior, and Teacher. He’s the Royal Palace’s lead surgeon and scientist. As well as He-man’s most trusted ally and friend.

Man-At-Arms is well versed in all weapons and vehicles. He brought his adopted daughter Teela up to be Captain of the Guard.

Man-At-Arms is often put in charge of expeditions or investigations.

As a young man, Man-At-Arms was mentored by Rohad. He was taught the sciences and engineering. The two men collaborated on many sophisticated devices.

One day near the Crystal Sea, Man-At-Arms heard the cry of a falcon. Mer-man and his subjects had come to capture Zoar the falcon. They intended to sacrifice the bird to an evil sea demon. It would have been easy for the falcon to fly away but there was something in the nest she was protecting. Something she’d give her very life to defend.

The young warrior, Man-At-Arms, used a gadget to defeat Mer-Man and his minions. Man-At-Arms found a baby girl in the falcon’s nest. This was the Sorceress’ daughter, Teela. The Sorceress had taken her to the wilderness to raise her in peace. However, after the attack she realized her daughter needed a real home. Man-At-Arms promised to care for her all of his days.

The evil Horde, an intergalactic force, invaded Eternia. Their attack was turned aside by the heroic warriors and the Palace guard. But not before their leader Hordak kidnapped the infant Princess Adora. Even Man-At-Arms and the Sorceress couldn’t stop the fleeing villain.

Man-At-Arms raised Teela as his own daughter. He taught her about weapons and electronics. She was sent to fine schools.

Man-At Arms found employment with the King and Queen. As time passed, he became one of their most trusted advisors. He became a friend and ally to Prince Adam and is one of the few people who know his secret.

Man-At-Arms has free reign to work on his inventions in whatever measure he decides.

Man-At-Arms has a body builder’s frame. He’s clean shaven except for his well-kept moustache.

His armor is heavy partial body armor including a helmet. On his legs he wears shin-guards. All his armor is yellow in color, while his body-glove is green. He wears barbarian style brown shorts.

He is a man of purpose and driven. Man-At-Arms will work a problem until he solves it. A hard worker, his inventions go through many tests before he calls them reliable. 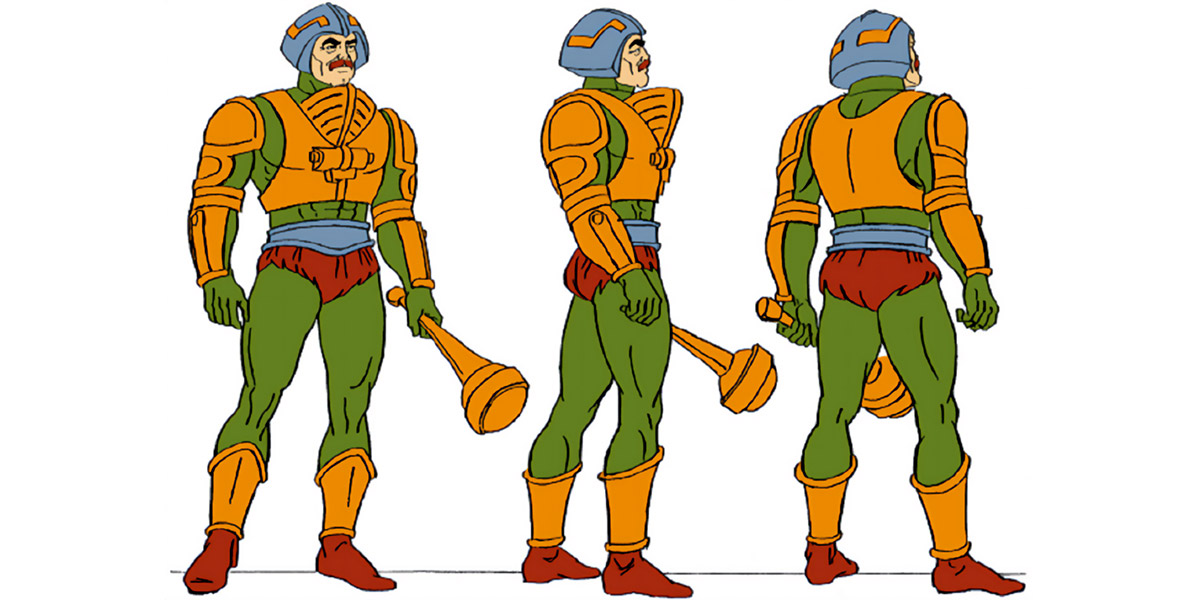 Man-at-Arms has earned the respect the Royal family. He will fight to defend them. King Randor relies on Man-At-Arms to summon He-man in the case of an emergency.

Man-At-Arms fills the role of fatherly figure to Teela and at times, Orko. Man-at-Arms and Teela are very close. Man-at-Arms share a special bond with Prince Adam. Adam can safely share his secret and ask for advice.

He and He-man fight side by side against Skeletor’s forces. Man-at-arms, like the Sorceress, acts as a moral compass for He-man. Guiding his development and reminding Adam that he was given his power to help others, not himself.

As a serious fellow, Man-At-Arms is almost always the butt of jokes. When Orko’s tricks go wrong Man-At-Arms ends up with egg on his face.

(Making a distress call to the Royal Palace)
Man-At-Arms: “Adam, is that you ?”
Prince Adam: “Man-At-Arms ! Where are you ?”
Man-At-Arms: “At Snake Mountain, Skeletor’s got me in his dungeon. I managed to rig a communicator but I can’t talk long. I knew you’d be standing by, I need your help !”
Prince Adam: “See you soon.”

Orko: “Ok now, is everybody ready ?”
Man-At-Arms: “Orko, I don’t think I’ve ever been ready for one of your tricks.”

“Fighting is often not the way to settle a problem. It may prove who is stronger but it doesn’t prove who is right.”

(Skeletor attacks the castle with fireworks setting much of the kingdom on fire).
King Randor: “Duncan, bring out your new fire shuttle !”
Man-At-Arms: “I’ll have to make a few adjustments but I’m on my way.”

(Testing out a new invention)
“If this works it could mean an endless food supply.”

(Orko’s sorcery was neutralized)
“I wish I could help you Orko but I don’t know what to do. If this were a scientific or medical problem that would be something else again but magic, that’s a little out of my league Orko.”

“That’s the difference between good and evil. Those who are evil will do whatever they have to, to win. But as long as there are good people who are willing to do what their conscience tells them. Evil will never win.”

I always see him as a background figure. Yeah, he’s the most skilled in Eternia but he’s always the fatherly advisor.

On Earth in the DCU, I see him working for a government somewhere. Putting his genius to work. Combating alien invasions, dimensional warlords, and evil supers. He would be a heroic counter to the mad-scientist archetype.

A 1121 points Character (Without equipment).

Bonuses and Limitations:
Telepathy is only useable with the Sorceress of Grayskull. It is only one way, like making a call. Once the Sorceress answers mentally, she then may allow a connection with others giving Man-At-Arms further mental communication (-2).

Equipment:
Man-At-Arms has access to all vehicles, weapons, and equipment in the Royal Palace. His everyday equipment:

The following items are easy to get in a short amount of time. It wouldn’t be odd for Man-At-Arms to have these items on his person especially if he were adventuring:

The following items take more preparation. They are bulky or uncommon. For example, they may be kept in his armory until needed.

Man-At-Arms never used Telepathy himself to talk to the Sorceress until the episode Eternal Darkness.

Source of Character:The 1983/1984 animated series He-man and the Masters of the Universe, voiced by Alan Oppenheimer. 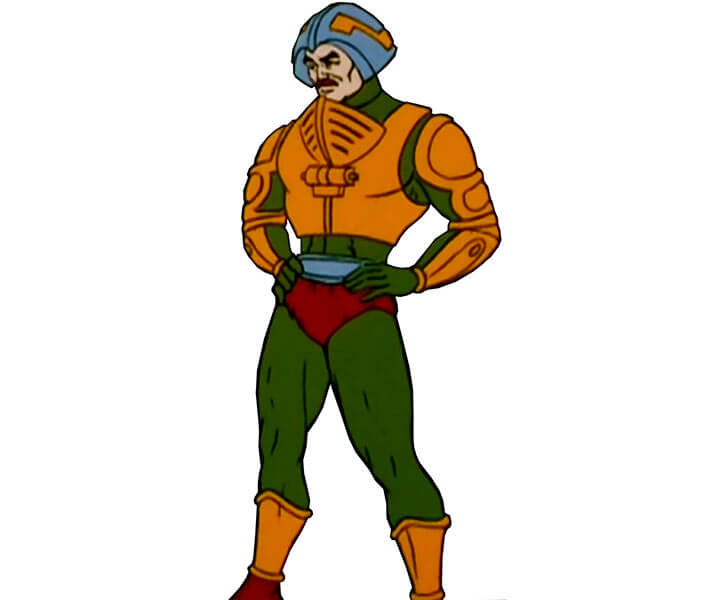 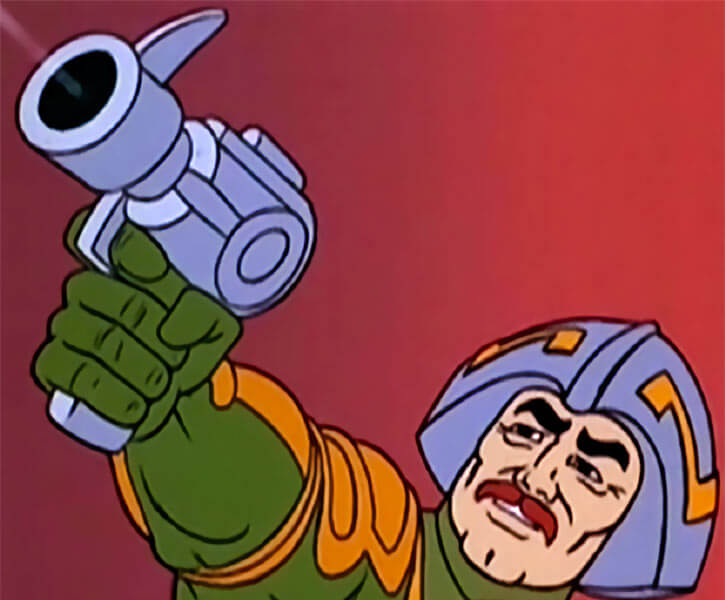 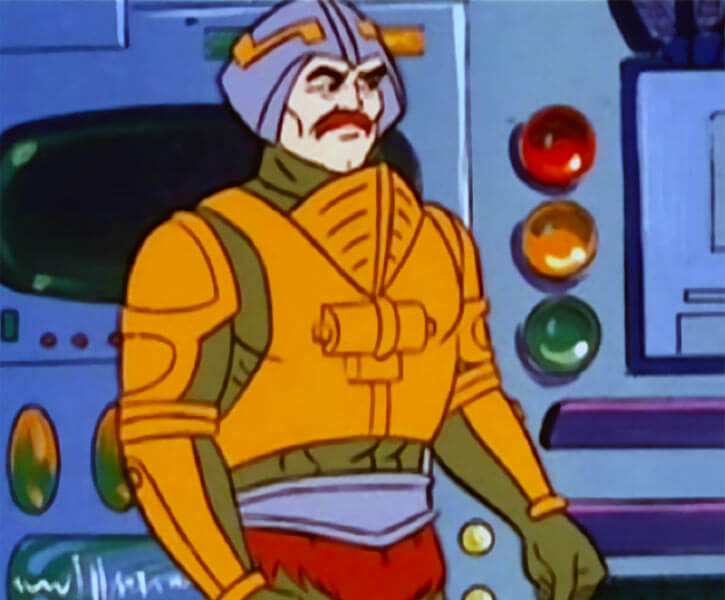 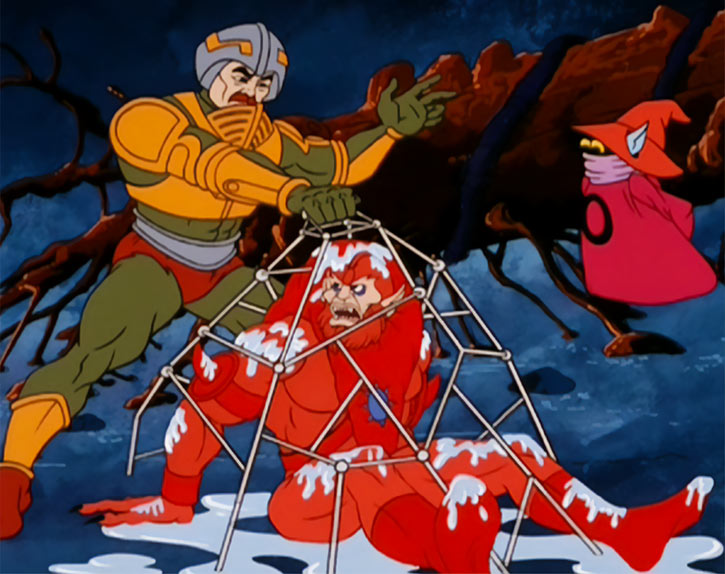 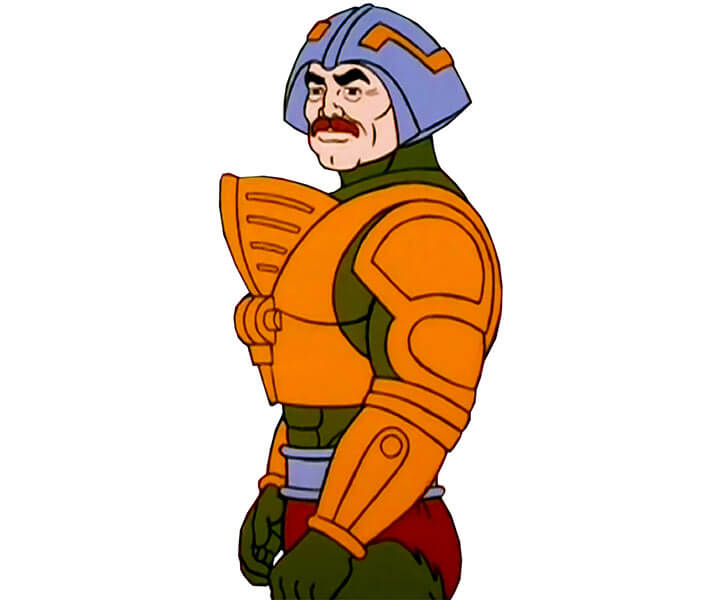