His body flooded with Energy X, Ted Taylor is a walking time bomb. He is continually pulsing with devastating releases of all forms of electromagnetic energy (“Energize Release”). He must wear a special containment suit which bleeds this energy off harmlessly, or be a constant danger to himself or anyone around.

By manipulating the energies within him, he can agitate inanimate molecules to trigger one of the following effects:

His containment suit is not foolproof, but it enables him to be around other human beings without killing them. It also gives him superhuman strength, as well as considerable resistance to conventional injury. It is not environmentally sealed, however, and it is assumed he takes his meals alone.

Originally a playboy of the worst degree, Ted Taylor was struck with a pure beam of undiluted Energy X. This caused him to wreck his expansive, fancy sports car, killing the girl he was with at the time. Horrified, he rushed to the home of his brother Tom. Tom was a genius scientist who was working on an exoskeleton intended to help paralyzed individuals move around.

Tom managed to convert the suit to run off Ted’s energy pulses, as well as store and bleed off the excess energy. But before Ted could put the suit on, he released a pulse that killed his brother. Distraught, he sequestered himself away from humanity.

When Nuclear Winter began his snowy takeover of Patriot City, Taylor could stand by no longer. He teamed up with Minuteman, Mentor, and El Diablo to stop the frigid felon, and became the fourth founding member of Freedom Force.

Ted Taylor is a handsome man with a flashing smile that will never be seen again. Instead, he spends all of his time in a large blue metal containment suit to prevent him from wreaking havok wherever he goes.

The chest of the suit has a glowing purple vent, continuously radiating low levels of energy as light, and cables connect the suit’s backpack and helmet to the rest of it.

Glum, gloom, and self-loathing pretty much describe him to a T. This is very similar to the early appearances of the Thing. When on a mission, he is all business, often using phrases like “I have a target”.

However, he is a reluctant and relatively unskilled combatant, apologizing to his enemies when he blasts them through brick walls. Man-Bot relies on the sheer physical power of his suit, and the raw firepower at his disposal, to take care of those he faces.

(Trying to get Alche-Miss to stop coming on to him): “Stay away, Alche-Miss. You have no idea who I am – or what I’m capable of.”

“It’s hopeless ! I should just accept my fate – to be a menace to my fellow man, and an outcast – FOREVER !”

Drawbacks:
Guilt, Misc: Without his Containment Suit, Man-Bot’s Bomb power pulses on every 8-10 AP’s of time, whether taking damage or not, and at 8 AP’s centered on himself. He is unaffected by this pulse. 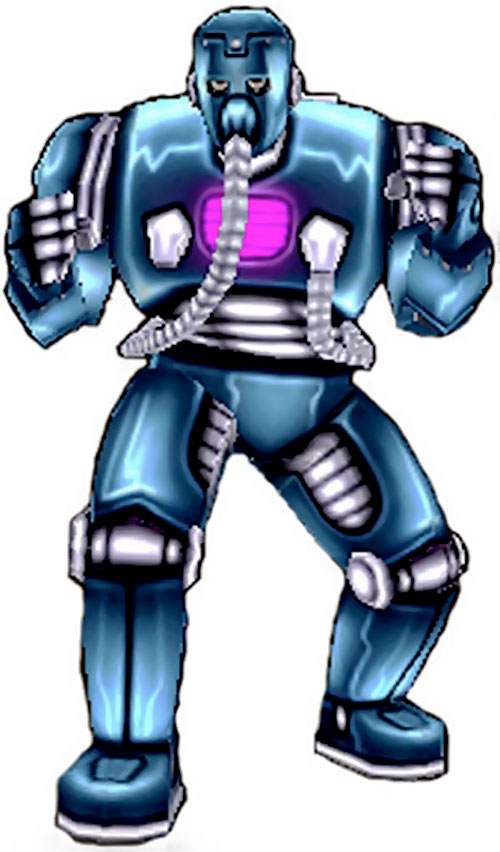 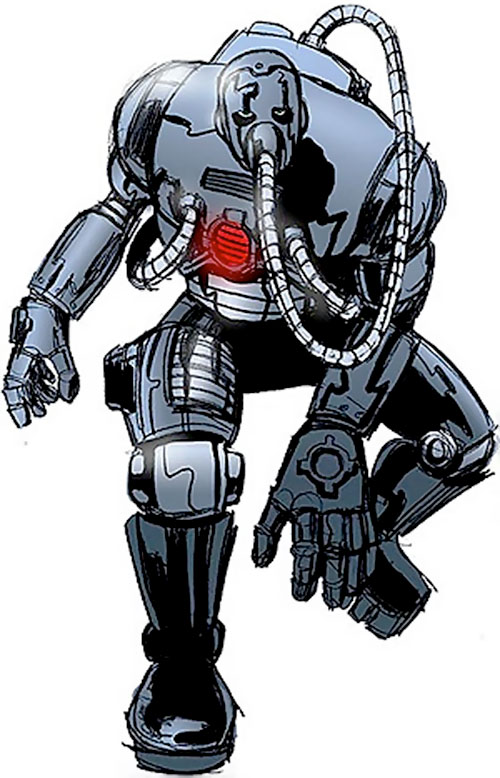 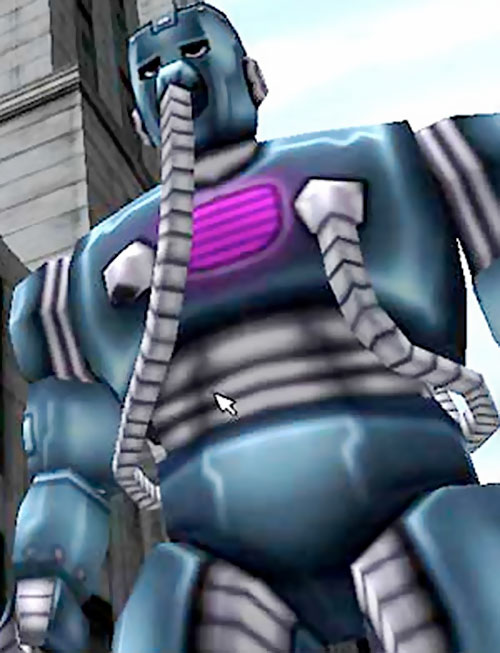