Man-E-Faces is a well-known, if minor, heroic warrior from the 1983-1984 He-man and the Masters of the Universe cartoon series. A master of disguise and actor.

Man-E-Faces only appeared in two episodes – “The Mystery of Man-E-Faces”, and “The Shadow of Skeletor”. He never appeared in the She-Ra series, but he has a quick cameo in the He-man and She-Ra: Christmas Special.

Unless you’re familiar with Man-E-Faces’ world, we suggest that you first read our Masters of the Universe world notes.

His physical strength makes him one of the strongest beings on Eternia.

Man-E-Faces makes for a fantastic spy. He is a master of disguise, and skilled enough to copy any voice.

The many faces of Man-E-Faces!

Man-E-faces’ has three main faces. These are his human, monster, and robot faces.

Using his disguise skill, he further created the faces of Skeletor, Beast-Man, and even a giant-sized Orko!

In his second appearance, he showed Teela his new monster mask. But it looked identical to his usual monster face. This suggests that he may not act well in his actual monster and robot forms.

Man-E-Faces could flawlessly impersonate Beast-man. His perfect-looking disguise and acting skill allowed him to infiltrate the evil warriors. 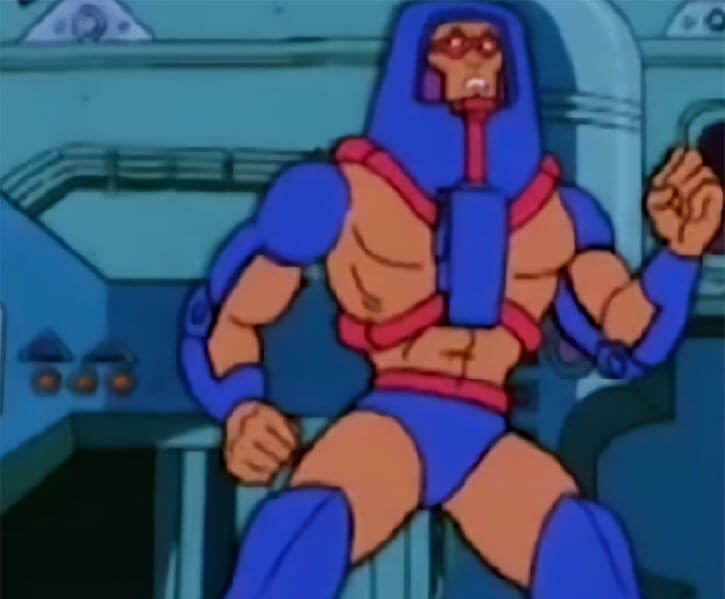 His story began with the Widgets. A nocturnal monster was terrorizing their fortress, and that monster was Man-E-Faces!

One night the monster approached the fortress door and demanded entrance. When the Widgets refused, he changed his face to a robot and smashed down the door. He told the Widgets he was in charge and ordered them to feed him.

When they tried to summon He-man, the monster smashed their signaling device.

My heart is human, my blood is boiling, my brain IBM

Zoar the falcon was flying overhead. She flew to the Royal Palace and warned Prince Adam of the Widgets’ peril.

Adam quickly transformed himself and Cringer into He-man and Battle-Cat. They sped to the Widget’s fortress. Teela and Orko joined them in the Wind Raider.

But after a brief battle with He-man, it was Skeletor and Beast-Man who captured Man-E-Faces. Beast-Man was able to control Man-E-Faces in his monster form.

Skeletor proceeded to Castle Grayskull. But the Sorceress was ready for him. She launched many energy balls at his ship, knocking it about.

When He-man arrived Beast-Man and Man-E-Faces were nevertheless pulling down the Jaw-bridge. The Sorceress helped Man-E-Faces change his form back to human. No longer a beast, he freely man-handled Beast-Man. 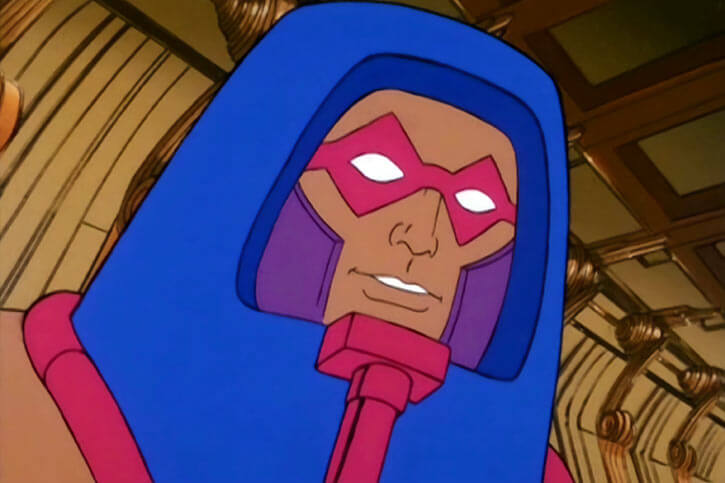 Skeletor teleported Beast-Man back to his ship to make a getaway. But He-man and Man-E-Faces grabbed him – and teleported to the ship along with Beast-man.

He-man and Man-E-Faces damaged the Collector. Then jumped free before it crashed into the bottomless gorge.

Man-E-Faces became an ally and friend. He also put his talents to good use, becoming a great stage actor.

The Shadow of Skeletor

Skeletor sent his warriors to the Dark Moon of Eternia. The Dark Moon and the Light Moon had signed a Peace Treaty. He meant to undo it.

Mer-Man, Evil-Lyn, Whiplash, and Trapjaw were already on the Dark Moon. Beast-Man was traveling there by ship, flying on autopilot.

But Beast-Man touched the controls, accidentally crashing the ship near the Royal Palace. He-man and the Heroic warriors captured him.

Man-E-Faces, disguised as Beast-Man, flew the ship on autopilot to see where it was going. Meanwhile, He-man and the others flew a shuttle to the Light Moon to gather information.

However, Beast-Man escaped the Palace’s prison. He headed to Snake Mountain and Skeletor.

He-man and the heroic warriors clashed with Skeletor and his warriors. Skeletor was again defeated – and peace was restored between both moons.

Man-E-Faces wears a large blue helmet that houses his many faces. Plus blue gloves, boots, and trunks.

Like most heroic warriors, Man-E-Faces has the powerful form of a bodybuilder.

To begin with, Man-E-Faces was sullen and harsh. A bitter outcast. Because he could change his face, others called him a monster. He became cold and cruel.

This changed when he met He-man. He-man convinced him to change his ways.

When challenged, Man-E-Faces defaults to his most aggressive monster form. Even though his robot form is stronger. One gets the impression he hopes to intimidate his opponents rather than harm them.

After his first appearance, showing his strength and fighting ability, Man-E-Faces settled in at the Palace and worked on his acting skills.

It was Orko who came up with his name. 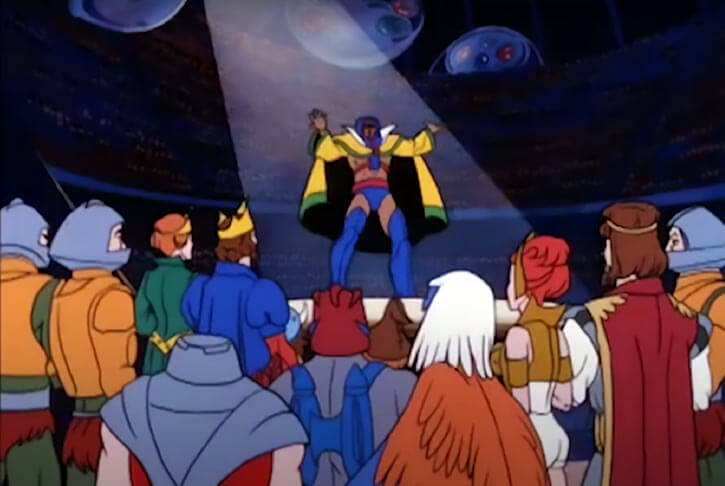 Man-At-Arms: “I’ve heard my daughter, Teela, talk about you. She says that you’re quite an actor.”
Man-E-Faces: “I am. Thanks to her and to He-man. Now, I must prepare for the show.”

“Don’t laugh at me ! Everyone always laughs at me.”

(Man-E-Faces teleported into Skeletor’s Collector)
Squinch: “That creep was one of Skeletor’s gang.”
He-man: “Was he Squinch ? I wonder.”
Orko: “Come on He-man, you saw what he did to the Widgets.”…
Sorceress: “He-man is right my friends. Though the stranger was hostile, I sense there is no real evil in him. He is a man terribly alone and afraid.”

Skeletor: “I’ve been watching you stranger. Your ability to change your faces and your strength would be of great use to me and my conquest of this planet.”
Man-E-Faces: “I don’t work with anyone.”

He-man: “Wait ! You might’ve been mean to the Widgets, but we know you’re not a villain. Who are you ?”
Man-E-Faces: “No one ever asked me that before. People were always afraid of me and the things I could do. Because I could change my appearance. They thought I was a monster and since nobody wanted me around, I became cold and cruel. I learned to take what I wanted from those weaker than me.”

“I understand. You can depend on me.”

“It’s getting ready to land. I’d better hurry and put on my Beast-Man face.”

(Robot Voice): “What is your command.”

I like the idea of a villain who changes to good.

Man-E-Faces may have originated from the Cadmus Project where they were trying to perfect the Cyborg.

The Actor Skill might only be available while he’s in his human form.

Man-E-Faces doesn’t normally carry weapons. He has carried a hand-held communicator to relay information while spying.

All alter-egos share mental and mystic attributes and HPs. As well as Occupations, Motivations and Wealth. 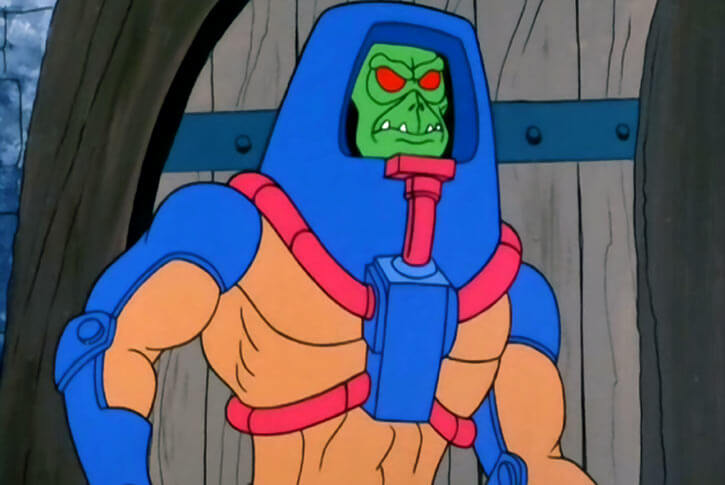 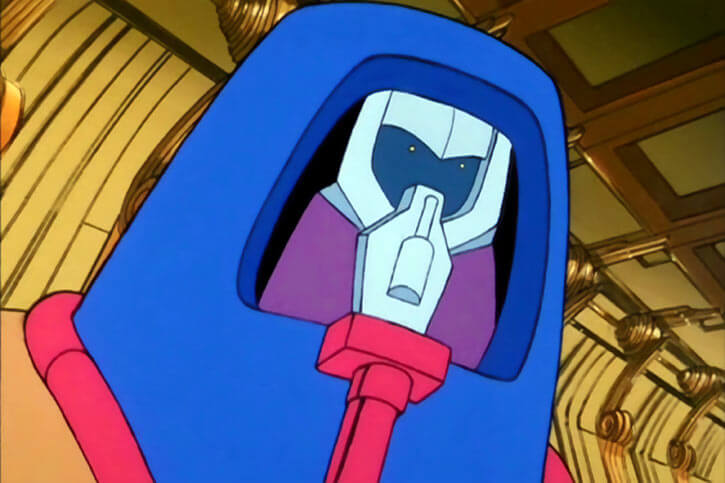 Man-E-Faces action figure came with an energy pistol. He has access to all the equipment of the Royal Palace, so this wouldn’t be out of line. Added Linked Weaponry skill.