The Man from the Vortex appeared in 1993, when Dark Horse Comics launched the Comics’ Greatest World imprint. It was a brand-new super-hero universe. The CGW (later renamed Dark Horse Heroes) lasted for but two years, as the super-hero comic market collapsed. But some of its more successful characters still see publication to this day.

The Man from the Vortex was an enigmatic character, as well as a plot device. He had deep ties to the source of most super-powers on Earth, he was the linchpin to many of the setting’s secrets.

The Vortex is probably the most powerful being on Earth. He spent thousands of relative years in the Vortex and became completely linked with it.

The Reaver Swarm is a large, highly organized interstellar horde made of many alien species. For nearly a million years, it has cut a bloody path of destruction across the galaxy. The Swarm killed entire species in the name of their god-like leader, the seven-in-one, the Septenarius.

Eventually, one of the Destroyers of the Swarm realised that the destruction of intelligent life had to be stopped. He launched a desperate plan that involved stealing the secret energy source of Septenarius, itself stolen from a long forgotten race : the Motor.

The Motor was used to drive the technology of the Septenarius, and allowed it to conquer half a million worlds. Having advanced scientific knowledge, the rogue Destroyer managed to understand the secrets of the Motor.

Run for your life

He fled to another planet, where he attempted to use the Motor to turn a group of fighters into superpowered agents. Hopefully, these could take on the Septenarius and the Swarm. The experiment failed, turning the subjects into monsters.

For many, many years, the scientist fled from planet to planet. He continued to piece together the secrets of the Motor. Yet his subjects kept turning into monsters or dying. And the Reaver Swarm was after him, killing everything in its path. Sometimes, they found that the scientist’s experiment had gone so wrong that not much was left alive on the planet to witness their arrival.

The scientist arrived on our Earth in 1931, establishing his lab underneath the Nevada desert. In 1947, at a critical point of his experiments, an experimental atom bomb was detonated in the desert. The explosion triggered a chain reaction that turned the scientist’s experiment in a disaster.

One result was a strange globe of transdimensional  energy known. It became known as the Vortex – although Law, the first person exposed to it, called it the Maelstrom. It also created most of the superhumans in that world over the next 50 years.

The alien scientist disappeared into the Vortex. The US government then discovered the alien underground complex, near a small town called Cinnibar. They built one of the most secure, most secret bases of the country, working on the secrets buried underneath. They also probed the Vortex itself, losing many men in those futile attempts. 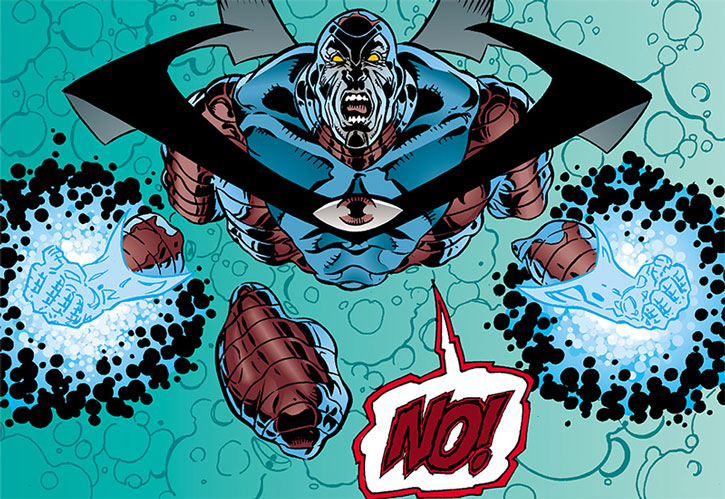 Most simply disappeared, but many were mutated by the Vortex into monstrous and/or superpowered forms. Almost all of those were imprisoned into a facility known as Block 13. Numerous scientists and soldiers were horribly transformed before the base could be sealed. However, despite the army’s best efforts, the infection and mutations continued.

In the 1990s, scouts from the Reaver Swarm appeared, looking for the rogue Destroyer/scientist. Tracking his energy frequency, they found traces of his power in many superhumans in the USA. From there they found the Cinnibar complex. They slaughtered the US forces within using advanced weaponry and force fields, and reached the Vortex itself, from which they pulled the alien scientist.

Before they could destroy him, he attacked them with an unexpected level of power and killed them. The alien then expelled US troops from his base using a force field. He selected one Lieutenant Anderson as his contact with humanity.

Return from the Vortex

The Vortex immediately resumed working. He hoped to produce results fast enough to fight against the Swarm and prevent it from razing the Earth. During this work, he thwarted the attempts of advance soldiers of the Swarm to destroy him. These amounted to one more Seeker and seven Destroyers.

He also discovered that while he was in the Vortex his computer has interacted with at least three humans : Hero Zero, Mecha and Motorhead. The latter was now hosting the Motor itself, and the Motor refused to leave. The alien also interacted with Grace, who decided to trust him for the time being.

When the all-American hero Titan became violently demented, he escalated his assault all the way to Grace. She was ledt with no choice but to take the fight to the Vortex, the most powerful thing she knew of, hoping the alien scientist would be powerful enough to stop Titan. He did, with the help of Grace and King Tiger, but Lieutenant Anderson was killed in the early stages of the fight.

Grace and Vortex talked a bit after that, and Grace is thus the only person to know of Vortex’s origin.

Titan’s actions before his death had damaged Block 13. Some of the mutated creatures were loose in the Nevada desert, being hunted by the Army and looked for by Division 13. Vortex recovered two of the creatures, but they reminded him too much of his previous failures.

By this point he was fed up with :

This is the end

The alien researcher started dismantling his installations. However, Grace was afraid that destroying the lab would destroy the powers of the Vortex-touched. Hero Zero also responded, since the central computer of the base was his best friend.

Vortex calmed down. He admitted he was impressed by Grace’s courage and touched by Hero Zero’s devotion to his best friend. He gave several Zero-like gems to Hero Zero, agreed not to destroy his machines and made Grace the keeper of his science complex. He then departed with Anderson’s corpse, announcing he would not protect the Earth from the Reaver Swarm.

Six weeks after that, someone came out of the Vortex looking for the alien scientist, whom he called “Zolot the deconstructionist”. That person was none other than Nexus.

Cold, unconcerned with humanity, obsessed with the risk caused by the Swarm.

No ability to understand humor, considers it a waste of time and energy.

Acts in a highly rational way, with clearly set priorities – making him quite a one-track mind.

However, the Vortex has great respect for courage and intelligence, even when present in sworn enemies. He also has a great ability to disrespect people and piss them off.

“Another totally useless comment. One that serves no purpose at all.” 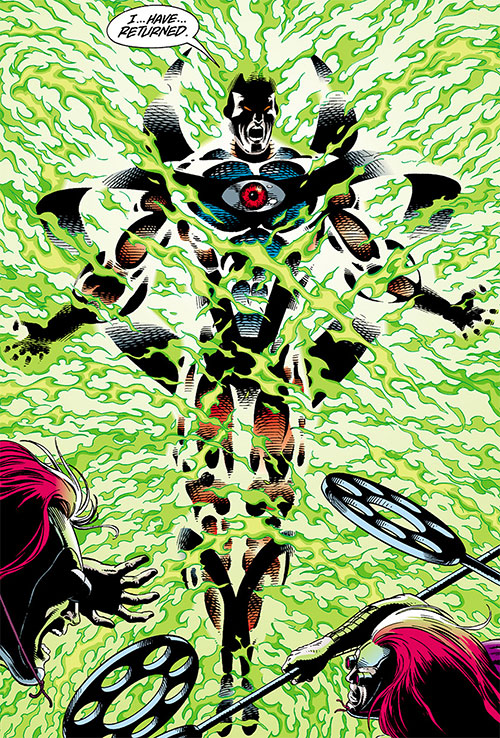