It references Dumas , but it’s an entirely separate story.

This solid iron mask covers the entire head and neck, plus parts of the shoulders. In this story, a key use is to block incoming punches with one’s head. It doesn’t hurt the mask-bearer at all. And the pain and damage can easily incapacitate even a fit and trained puncher.

The two persons who wear the mask during the story turn out to be excellent brawlers. They can hold their own against the Batman. Now, 1947 Batman wasn’t a combat monster – a determined thug could be a threat. But it’s a bit odd. Thus, our game stats play that up by having the mask enhance most bearers’ combat prowess.

Nobody ever worries about eating and drinking whilst wearing the mask. So there likely is a mechanism to allow for that.

In 1947, a mobster going by “Iron-Hat” Ferris was spotted talking to the police. His boss, nicknamed “Specs”, produced a medieval Schandmaske (“shame mask”). He had his men weld it shut around Iron-Hat’s head, then warned other criminals not to offer help to the traitor.

Historically, Schandmasken (also known as witch’s bridles, mordacchias, etc.) were chiefly used in parts of Europe to punish and shame women for speaking up, or gossiping about the wrong persons. But this specific mask (which curiously evokes Batman’s mask) seems different.

A caption specifically references Alexandre Dumas’ Le vicomte de Bragelonne , the last of the Musketeers Trilogy novels. This is one of the more famous literary uses of the “the man in the iron mask” historical anecdote, which long fascinated the French public. So it likely was used to punish a man and hide his features.

Know that a mask brings power

One of Iron-Hat’s buddies was willing to take tools to the mask and open it. But he demanded a grand in cash (about $12K in 2018 USD) due to the risks. Desperate, the man in the iron mask broke into an iron tabs food supplement plant to steal money. But Batman and Robin forced him to flee.

The electoral campaign for District Attorney was on. One Henry Kendall saw an opportunity to make the current D.A. look incompetent and take over. He lucked out and found Iron-Hat Ferris first. He told him about a deal, but Kendall just bound Ferris, took the iron mask and impersonated him.

The iron-masked Kendall launched a wave of robbery. He took care of targeting companies evoking iron, to make it all more memorable. Batman and Robin tried to stop him, but he escaped.

Not the king of the Rumba beat

However, a tracer bug allowed the Dynamic Duo to locate the Man In The Iron Mask’s hideout. They got in just before Kendall would put the mask back on Ferris and eliminate him. And Batman was wearing a pair of cesti, allowing him to punch the mask without harm to himself.

Though he had been knocked out, Kendall recovered, rushed Batman and fled. But he was still wearing the iron mask. While running across the open field behind his hideout, he was struck by lightning and slain.

This story took place nearly 40 years before Black Mask’s debut, so a tie is unlikely. Though I guess this specific mask could show up as an Easter Egg in Black Mask’s collection. Perhaps it would be next to the Scarlet Mask ? 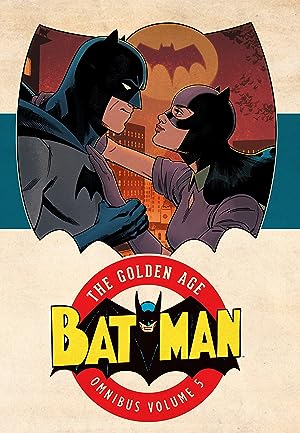 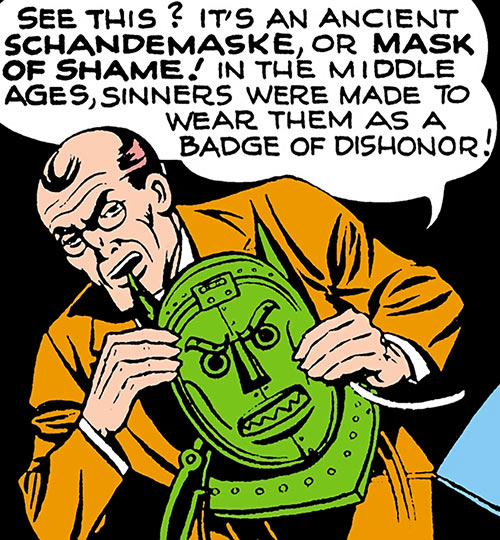 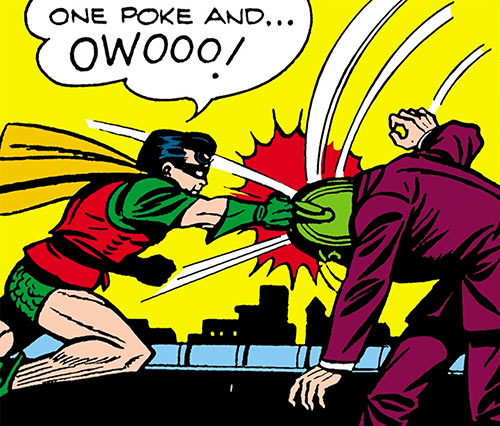