As a mutant, Warner is a superhuman giant whose body is reinforced by a sort of flesh-coloured carapace. It might be subdermal organic plating made of bone, chitin or another substance. He is superhumanly strong and durable.

He displayed a number of mental, perhaps psionic  powers :

It is possible that Warner was a “endless arsenal of powers” character, but it seems more likely that this is the bulk of his tricks.

If exposed to enough gamma radiation, Warner will allegedly mutate further and become so powerful as to be unstoppable. On the other hand, certain forms of light will shut him down – Batman achieved this by creating green light by shining a searchlight through a thin gold leaf.

Andrew Warner was a governor, apparently of the state Gotham City is in.

In 1964 he started experiencing terrible, alien nightmares – and his face would occasionally briefly warp itself.

Doctors eventually established that he was a mutant, an isolated case of what mankind would become in its next evolutionary leap. A gland near the pituitary was the seat of the mutation. It could either be removed to stop the process — or excited via special light to trigger the full transformation.

Warner always had an interest in science. In college, he ran experiments along with his fellow student Bruce Wayne. The governor decided to have the gland activated so scientists could study him. He quit his position, then prepared to quit the human race.

A glimpse of man’s future

However, the treatment mutated him very quickly and he fell prey to alien emotions urging him to take over the Earth as he now hated humans.

Batman and Robin were present as security – back in this continuity, officials such as Warner often had the Dynamic Duo help them out. As he felt his human mind slipping, Warner told them to stop him. He then beelined for a nuclear power plant to expose himself to gamma radiation that would make him powerful enough to take over the Earth.

Warner telepathically realized that Batman was Bruce Wayne. Underneath the mutant consciousness, Warner’s human self left behind tenuous clues about an experiment he and Wayne had run in their youth. Deducing the message, Batman shone a searchlight through a thin gold leaf at the mutant, and the green light made Warner collapse.

The unconscious Warner was loaded into a rocket to orbit the sun in suspended animation until mankind would catch up with him and free him to be among his own kind.

The mutant is a cocky, alien being filled with strange emotions, including contempt for inferior humanity and a desire to domination since he’s the higher lifeform.

However, shreds of Warner’s human consciousness are working against it as exceedingly subtle sabotage.

“I possess strange and awesome powers ! And — I find myself filled with sheer contempt for — mere men ! Yes — it is as I feared ! I feel an urge in me to — subjugate you inferior beings !”

The man who quit the human race

Bonuses and Limitations:
Thief (Stealth) is solely Audial and is a Powered Skill that is Contingent Upon Sound Nullify.

Connections:
Warner presumably had political and social connections as a governor.

Drawbacks:
Distinct Appearance, SIA toward the subjugation of mankind, Misc.: certain powerful green lights will immediately knock Warner out if shone upon him. 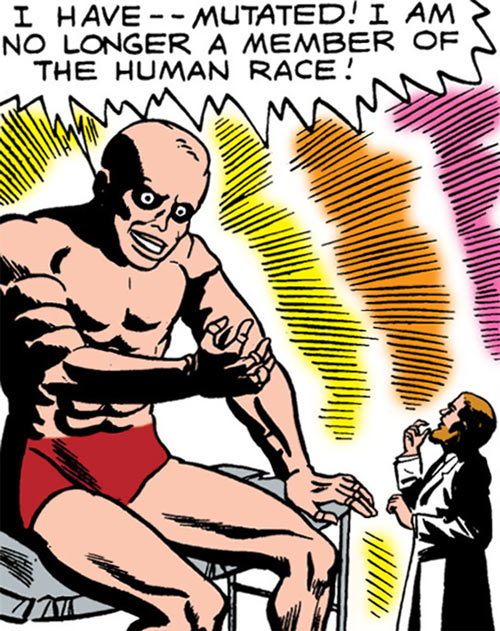 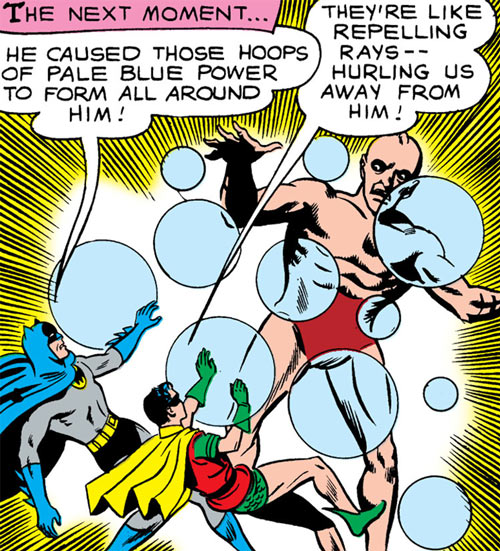