Man-Slayer is a towering humanoid android, with superhuman regenerative durability and strength. Furthermore it is a very powerful and swift hand-to-hand combatant, and could easily pummel even such an accomplished fighter as Captain Mar-Vell.

Though it has no eyes, it orients itself using a bat-like biological radar. Man-Slayer has no mouth either, and “speaks” directly in the mind of those around it using a sort of crude telepathy. In practice this is just a special effect – there’s no practical difference between this and just shouting.

Man-Slayer has repulsor beams in its palms, but doesn’t generally use them since melee is more efficient.

The Man-Slayer was apparently the test bed for a new generation of “bio-plastic” developed by the (Mad) Thinker. 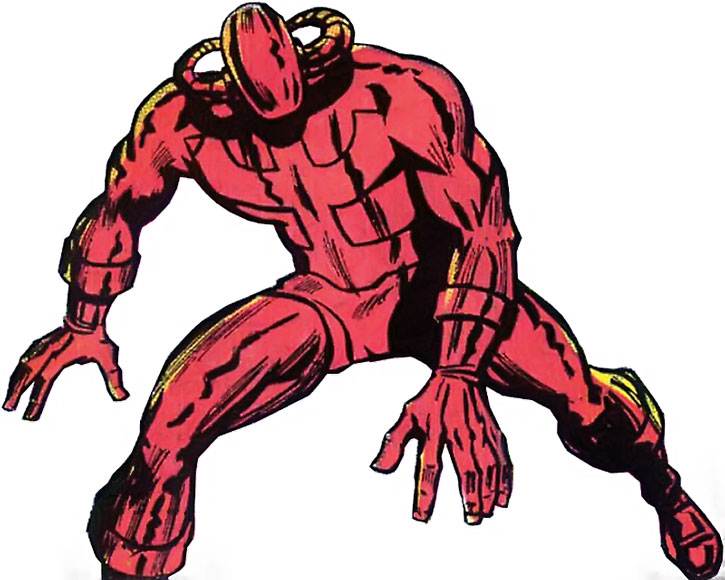 It probably falls under the “synthesoid”  umbrella. It apparently had organs and a nervous systems made of “bio-plastic” and emulating a human body to some extent. Those were supplemented by electronics for those functions where mimicking organics isn’t efficient.

The Thinker called this type of robot a “plastoid”, and built a cadre of much less powerful and sophisticated plastoids to serve as helpers and security.

The Thinker was very proud of his creation and wanted it to make a big splash and demonstrate its power. Thus, in 1969, he had Man-Slayer attack Cape Canaveral and destroy a Moon rocket as a test run.

However, the Cape was protected by the Kree soldier Mar-Vell, still in the earliest stages of his career on Earth. Furthermore, S.H.I.E.L.D. had located the Thinker’s base, and sent the Black Widow (Natalia Romanova) to sabotage it.

Though the plastoid ignored the gunfire from the military and mauled Mar-Vell, the Widow destroyed the Thinker’s command console. As a result, Man-Slayer froze right as it was about to deliver the fatal haymaker to Mar-Vell. The Kree likely never learned that the Black Widow had saved his life.

After some hours, the gigantic android revived itself using a back-up internal battery. It tried to resume its mission, though it was confused and much more hesitant as it no longer received real-time instructions.

Man-Slayer is about five metres tall and made of bright red plastic. Its appearance seems to evolve and adapt to a small extent as it repairs damage.

While under the Mad Thinker’s control, Man-Slayer delivered an impressive rant about artificial life supremacy and various megalomaniacal goals. It may have been the Thinker speaking through his creation rather than the robot’s AI, though. See the quotes for examples. 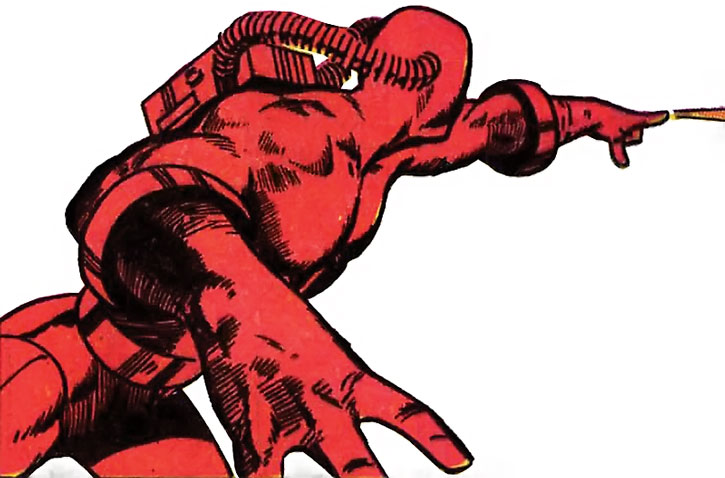 Once operating on reserve power, Man-Slayer was much more hesitant and ranted much less. It still wanted to accomplish its mission and would aggressively defend itself, but wanted to know why the voice of its creator was gone and what was the point of its mission.

“I am Man-Slayer ! A being of bio-chemical and electronic perfection ! Without emotion or feeble human motivations ! I have but one function – to destroy men !” 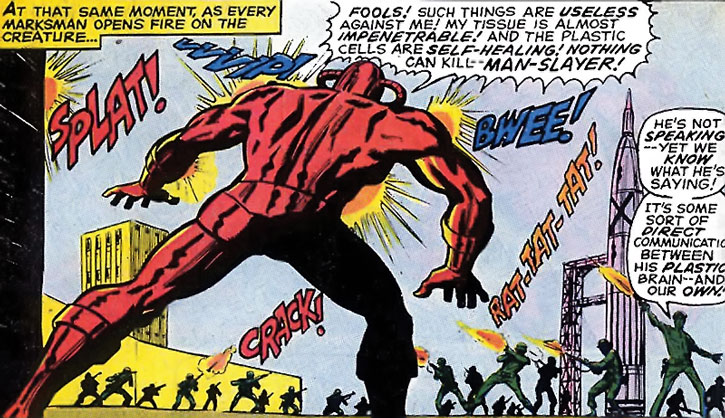 “I am ready, my creator ! Man-Slayer — the a ll-powerful creature of your genius — shall now destroy the Moon missile ! This labour — of ten-thousand men and uncountable cost — shall crumble beneath the might of one being — Man-Slayer, the first perfect living plastoid !”

“No natural being can equal the brute strength of this laboratory achievement !”

“The crushing of one who has become a living legend ! A symbol of hope and life ! For the end of Captain Marvel means the end of the puny dreams of all men ! And with this final blow — I shatter, not a man, but a world of false hope and pride ! Now shall all men know that there is one power and one destiny — and it is called — MAN-SLAYER !”

Advantages:
Misc.: The Man-Slayer doesn’t have eyes – which isn’t a problem thanks to his radar, but rather an advantage as it makes it immune to various attacks and illusions.

The Man-Slayer is monitored by a console in the Thinker’s lab. The Thinker can get real-time video and sound from his creation, and can bestow Hero Points to it in a Leadership-like manner.

However, if the console is destroyed the Man-Slayer immediately freezes. It can reboot itself using a back-up internal power cell, but this takes hours and leaves it much weakened, with all stats capped at 06 (this cap includes the effects of Growth).

Presumably the plastoid’s power steadily decreases over the next few hours after rebooting until it conks out again. 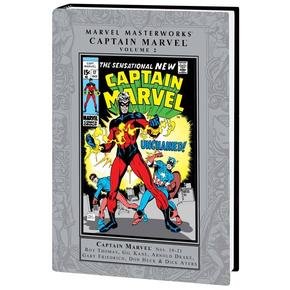 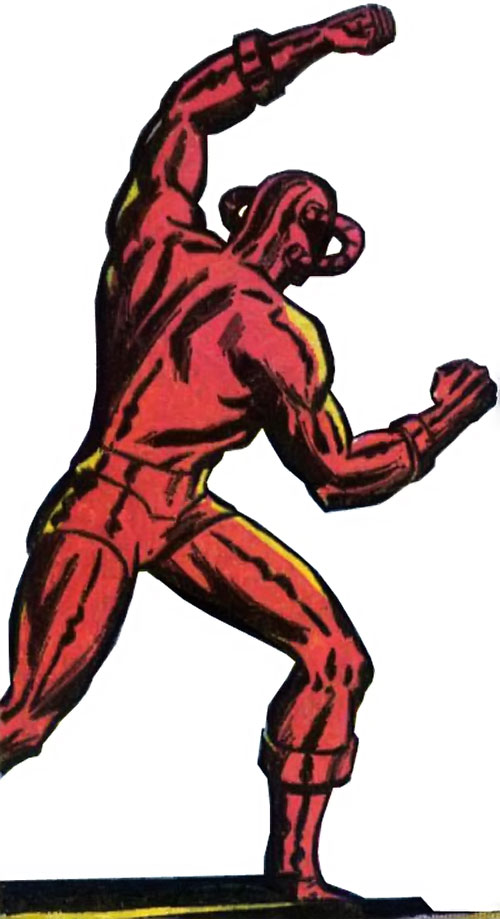 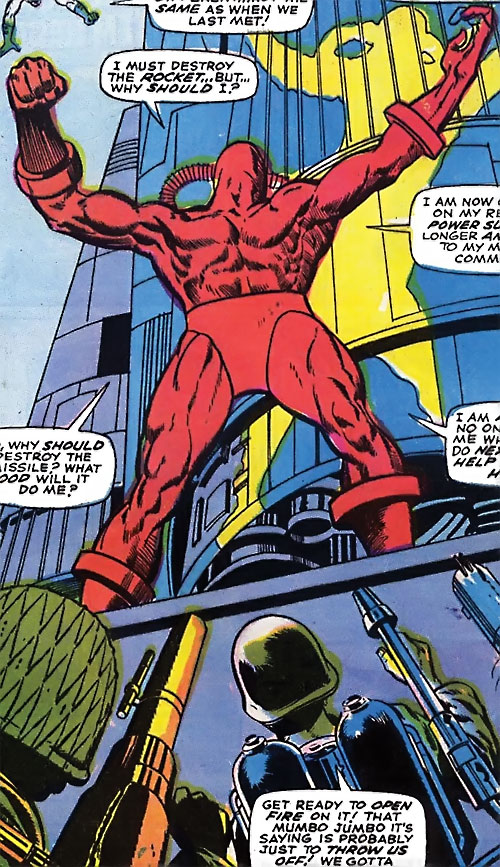 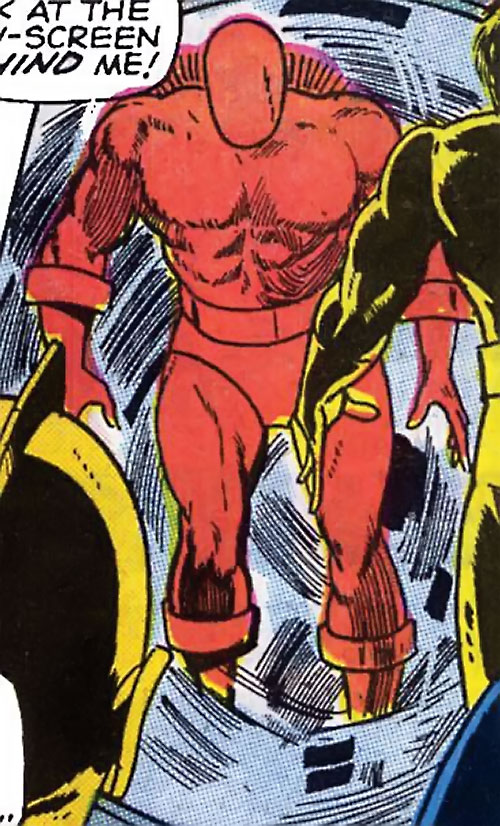 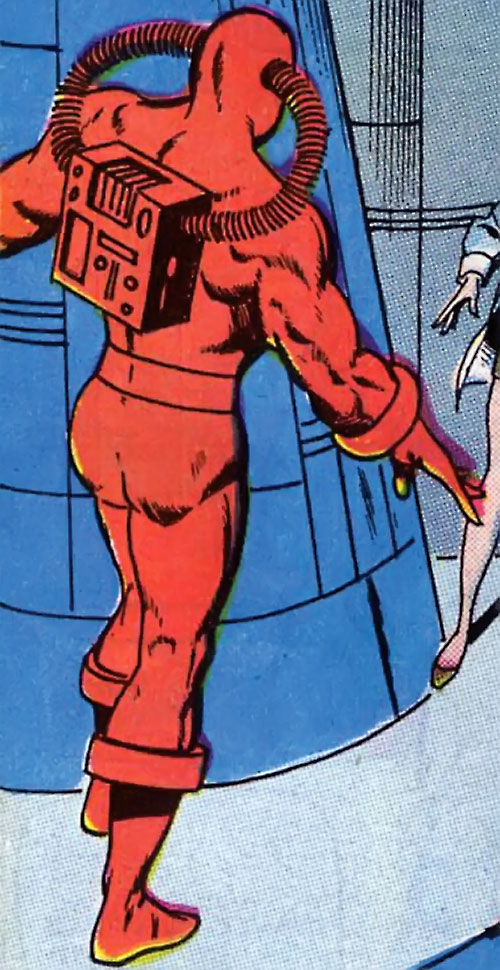