Death was a servant to his bidding!

“The Man Who was Death” appeared as the second story in The Crypt of Terror #17.

It was the first all-horror book in a series that had been called Crime Patrol for the first 16 issues. It would later come to be renamed Tales from the Crypt.

The first episode of the Tales from the Crypt TV series was based upon this story, and bore the same name.

Edgar has garnered a great deal of renown—particularly among the law enforcement community—for his willingness to take on the responsibility of executing prisoners, and the skill and meticulousness with which he does so.

He was apparently in charge of maintaining the electric chair. During his rampage he showed skills in rigging and concealing electrical traps.

Physically, he’s spry enough to shimmy up an electric pole during a raging thunderstorm. He also seems adept in getting into other people’s houses and sneaking around in the dark without getting caught.

He presumably received weapons— and training appropriate for a correctional officer. 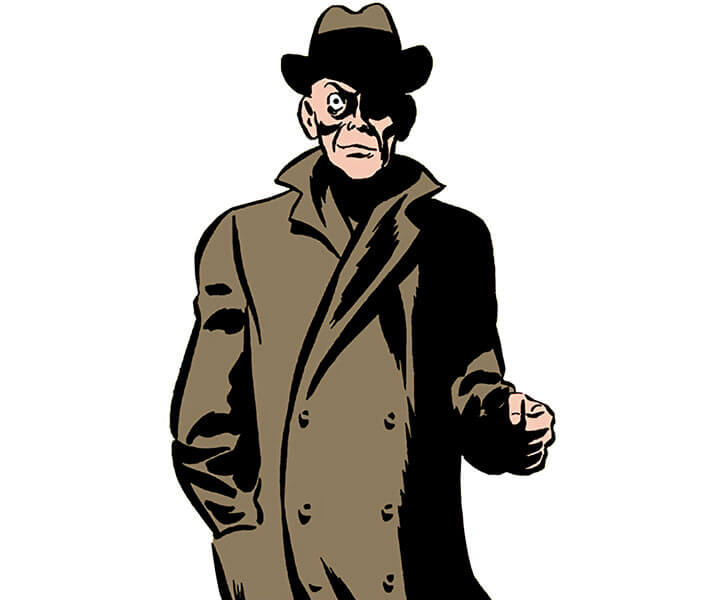 Edgar Bowman was the executioner for an unnamed State Prison. He took uncommon pride in his job, making certain the electric chair was clean and in good working order. Bowman did his job with an eagerness that unnerved his co-workers.

He regarded the criminals who came to him as spineless cowards, who’d had the nerve to kill, but fell apart when faced with the consequences.

Secretly, he believed himself to be fate’s instrument, bringing inevitable doom upon the wicked. He relished every second of it.

Bowman’s dedication to the job became known to prisons in other states. They invited him to attend and even participate in their executions as a guest of honor.

This small bit of fame developed into national attention. As a symbol of justice, and he found himself invited to appear on radio and television shows all over the country.

Unfortunately for him, however, “business”, as it were, began to drop. Fewer and fewer people within the state were assigned death penalties, with some even acquitted!

At first, Bowman was unconcerned, knowing that people went crazy and committed murder all the time.

But as the days rolled by, he found himself with little to do. Ten murderers in as many weeks, each let go by foolish jurors and judges. He began attending murder trials and saw people he knew full well were guilty being released right before his eyes!

Eventually, Bowman came to the conclusion that he was being tested by a higher power. His job as arbiter of life and death at stake, Bowman resolved that if he was to be an executioner, then he would execute. Even if it meant acting outside the failed laws of society.

Dark is the road you wander

I just freeze every time you see through me

Although on the surface these deaths appeared to be strange quirks of fate, the similarities between them made the police suspicious. They decided to monitor the recently exonerated Betty Bates.

Bowman recognized the plainclothes detective they had following Bates as one who’d visited the jail quite a bit. He thus realized that he’d have to put some careful thought into his next execution, making it his masterpiece.

Said masterpiece involved waiting until the dark of nightfall, hiding in the bushes next to the route Betty took from her office, then leaping out and tossing her into a wooden trough full of electrified water.

(It should be noted that he was pretty well deranged at this point.)

His plan came to naught when a bolt of lightning illuminated him as he struck. This revealed him to the plainclothes officer, who warned Betty and cracked Bowman over the head with his pistol.

On his way to the electric chair, Bowman could not appreciate the irony as he hysterically sobbed and pleaded for his life.

Edgar is a slim, severe-looking middle-aged man without a hair on his head.

When working as a CO, he dresses appropriately.

When sneaking around he wears a dark gray trench coat and an orange hat that’s probably supposed to be brown. (As often these colours were changed in reprints and digital reissues – ed.).

Bowman had nothing but sneering contempt for the murderers who turned into pathetic cravens when confronted by their imminent deaths. He came to hold his job as a sacred act in the name of a higher power.

When convictions started drying up, he took this as a sign that he was being tested. And that he had to execute people who had escaped justice by fooling juries into believing they were innocent.

Though he had several ready means of dispatching his victims at hand, Bowman was monomaniacally obsessed with finding ways to electrocute them. This was an obvious imitation of his duty at the jail. This would prove to be his undoing.

In interactions with his fellow officers, he seems legitimately friendly and polite, though some of his colleagues are a bit creeped out by his proclivity for executions. From the fact that he was invited to a number of shows, it may be assumed that he could maintain a good public face in general.

From the brief glimpse we see of his house, it appears he collects implements of war and execution in his spare time.

“’Not guilty’ ! ‘Not guilty’ ! Ten murderers in as many weeks—and all of them set free ! Fools ! That’s what those juries consist of—Fools ! Well, I’m no fool! I know they’re guilty !”

“He is only the first ! There are many other who deserve to die—and will !”

The first Electrocutioner’s motivations and electrical methods are so similar to Bowman’s that is seems unlikely that his creation wasn’t “inspired” by this story.

So let’s have him be a 1950s Black Canary villain, who inspired the older and the younger Buchinsky brother in-universe.

Lyle Bolton (aka Lock-Up) may have been partially inspired by Bowman as well. Perhaps his father was a cop who’d worked with him. But Lyle resolved not to go off his nut the way he had.

SIA (Electrocuting those he believes to be guilty).

The above are what he would wear on the job, though there’s no indication that he wouldn’t have access to them (or similar weaponry) off-duty.

There are in fact no official executioners in the US judicial system. The job of who flips the proverbial switch is assigned to a correctional officer by the warden when the execution is to be performed.

Assumedly, the writers were unaware of this, however their description of his position may be taken as figurative, with him simply volunteering so often that he has become the de facto executioner of his prison without holding a position by that name.

This is basically a long-winded way to say that he’s probably just an ordinary correctional officer with very odd tastes, and so I’ve given him what seemed to be reasonable CO stats and skills circa the early 1950s, as well as what seems to be appropriate gear.

Presumably, setting the story at a later date might give him more conflict de-escalation skills fitting with modern training.

Depending on the state the story takes place in, a CO may also be considered an officer around the clock, hence Credentials.

Although he gained some fame in-universe, I opted to give him Local Hero rather than Popularity, as it may be assumed that law enforcement may have better knowledge and a higher opinion of him than Joe Average.

Source of Character: Crypt of Terror #17.