Harmonica (as he is colloquially known) is a highly talented fighter, hunter and martial artist. He also knows about many exotic things, such as the creatures and cultures of the otherdimensional  Wold.

He stalks a most dangerous game – Darkurians.

He also has access to an extremely powerful weapon. It is a mass of liquid metal that can change into anything. This omni-weapon had been used as an energy cannon, sabre, flight belt, mechanical flying owl with video recording capabilities, interdimensional  portal, etc.

The man with the harmonica appeared in the late 1980s. He was hunting rogue Darkurians who had reached Earth. He assassinated an unknown number of these alien barbarians, though he didn’t manage to kill the veteran soldier Vurk. Vurk would later became Outrage of the Solution mercenary force.

Harmonica encountered Outrage a second time by chance. But he stayed his hand in disbelief when he heard a Darkurian attempt to negotiate and point out that a fight was pointless. Vurk convinced the hunter that he was not a menace to Earth persons.

The Man with the Harmonica later fought along with Outrage and the Solution when they went to the Wold. The Solution’s goal was to recover Shadowmage from the prisons of the Vyr. The team likely would have never succeeded without his help.

At the end of these tribulations, Harmonica chose to resume his solitary journeys. But Shadowmage predicted he and The Solution would meet again.

A bit of a mysterious lone avenger, a bit of the animé -ish young master with mysterious knowledge.

He always, always has an ace up his sleeve. Which is easy when your weapon can do anything.

His usual modus operandi when hunting is to sneak up on his target and start playing a magical, frightening music on his harmonica (presumably this (video)). It can send shivers up the spine of even a Darkurian. The mounting stress will usually result in blunders on his prey’s part.

Harmonica is tight-lipped and secretive, never saying anything about himself and preferring to work alone.

“You wouldn’t understand if I told you.”

Man with the Harmonica 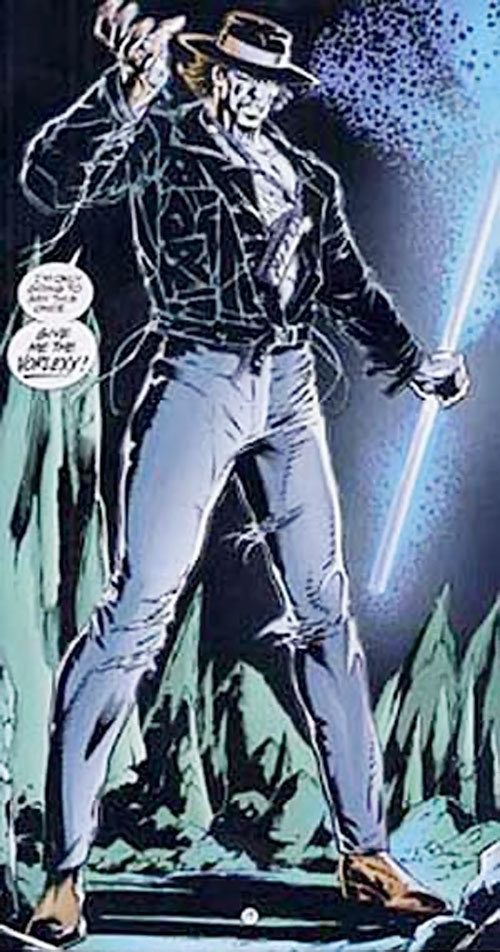