The Mandrill is extremely strong and tough (able to lift 2700lbs), and has the agility and power of his namesake. Although he’s outmatched by superior fighters such as Daredevil, he’s a redoubtable opponent for most humans. He can also run at great speeds for limited periods. His main power, however, are his pheromones, which are detailed above.

The Mandrill is an OK criminal leader and paramilitary force commander, and can survive in a desert with very little in the way of resources. Both abilities are in large part based on his ruthlessness.

The Mandrill emits large quantities of special pheromones at all times. These trigger hormonal reactions in most adult women, leading to extreme physical attraction. Then within seconds of exposure, most women will become submissive and open to manipulation by the Mandrill, as if hypnotized.

The pheromones occupy a space with a radius of about 250 ft around the Mandrill. The exact volume depending on winds, humidity and other environmental conditions.

The pheromones are addictive. Regular contacts will turn most women into a permanent thrall of the Mandrill. If forcefully deprived of contact with the pheromones, mild withdrawal is experienced until free of influence.

Technology can be used to manipulate the pheromones. The Mandrill once used technology to enhance his pheromones in order to mesmerize the male Thing (raising his Control to about 12 and bypassing one of his Limitations). On the other hand mild electrical stimulation has been used to deaden receptors within the Mandrill’s victims’ brain, returning them to normal.

Both roamed the Southwest. They lived away from other humans and fled from the occasional attempt on their lives. Their powers slowly emerged, and gradually allowed them to strike back against their oppressors. When they fully realized their mutant nature, they left for Africa and attempted to take control of three small nations, where no prejudice would exist.

Their totalitarian attempt at utopia was thwarted by Shanna the She-Devil.

Thus would start the Mandrill’s career. He would cyclically create an army, get defeated by superheroes and be jailed (generally by SHIELD). His first and most successful attempt was Black Spectre, an organization of Black radical women. Their attempt on America was only stopped by a pitched battle around the White House.

He came back with Fem-Force, another organization of radical women. Then he took control of a minor group once assembled by Magneto, Mutant Force. His worst defeat was probably when, while attempting to gain revenge on his parents by attacking the nuclear plant where they were still working, as he was shot by his own mother.

Mandrill was killed by the Grim Reaper when the latter started his (d)alliance with Nekra.

Bad, ruthless, unscrupulous, cinematic villain. He can be played as a minor camp menace, of course. But at his best he’s a dangerous opponent with a talent for strategy who can assemble networks of female activists and turn them into a highly efficient fighting force.

Mandrill himself is apolitical (although he hates prejudice), but activists have better access to weapons, training and other revolutionary stuff than msot.

He could thus be a good villain for a group of low-powered heroes, provided they don’t find him ludicrous (most people will). The radicals he surrounds himself with are interesting (and are just mind controlled young women, against whom mindless violence is not an option.

He’s basically lashing back at the world which has treated him badly and with strong racist prejudice. That he over-indulges himself, uses execrable means and mostly lusts for power and comfort is lost to him.

He has kept several habits, including interior decoration, from his African days. Nekra’s added dark religious trappings are a plus.

Mandrill is quite minor and could have existed in the 1970s in the DCU. He’s the sort of guy Green Arrow (Oliver Queen) would fight in the back pages of Det.

Drawbacks:
Creepy Appearance (half value as it does not apply toward women). 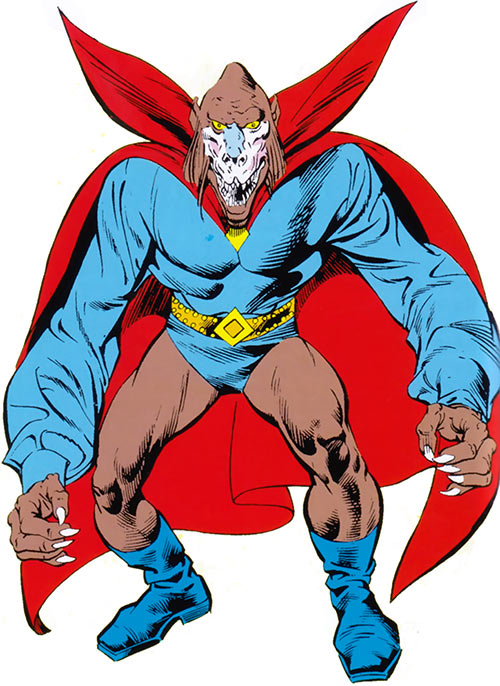