This costumed wrestler clashed with Luke Cage in a 1976 story.

Unexpectedly, he returned 40 years later as a more developed character.

This profile should be read after the Spear (Jasper Daniels) character profile.

He has a powerful physique — exceptionally broad and thick — and good pain tolerance.

He’s strong enough to crash through doors, and even engage superhumanly strong persons in hand-to-hand combat.

Mr. Daniels is surprisingly fast and agile. He seems to be trained in acrobatics, presumably as part of his wrestling work.

By 2016/17 he had become an experienced construction worker and foreman. 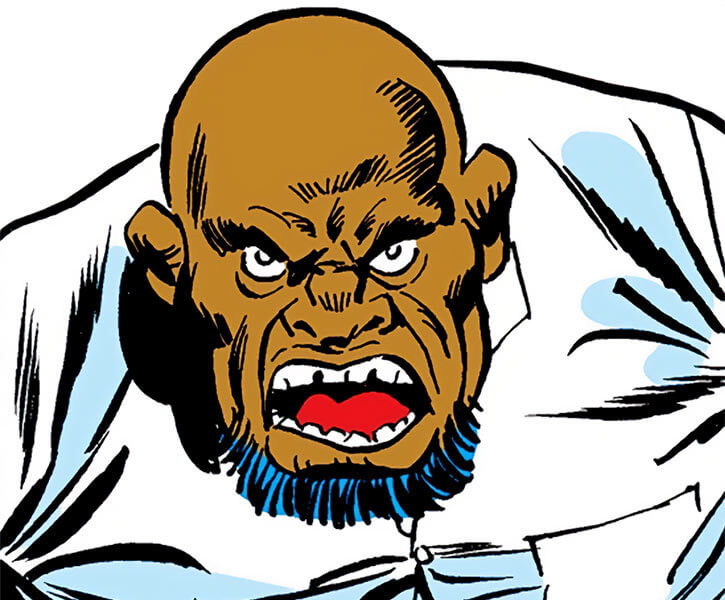 In 1976, the hot-tempered Mangler read about Spear’s quest of vengeance in the paper.

To help his brother, he stormed Luke Cage’s office and defenestratedThrow somebody thru a window. the hero for hire. And himself. And some of the office’s furniture.

This forced Jasper to let Shadrick help. However, Cage defeated the Mangler, who was arrested.

Spear broke his brother out of the precinct house, but Luke narrowly recaptured the rogue wrestler.

Mangler served time, but later went straight. In 2016 he stated he’d been an upstanding citizen for “a decade”. In a sliding time  context, this likely means he didn’t return to crime after his 1976 conviction.

They captured Daniels in a bar. A new criminal record was fabricated for him.

Jasper Daniels associated with others helping victims of Preemptive Strike’s actions. They tried to hire Luke Cage and Iron Fist (Daniel Rand-K’ai), but that went south. Jasper joined Shadrick in prison, along with Danny Rand.

Unlike his brother, Shadrick stuck with Iron Fist and “Little” Ben Donovan (“Big” Ben Donovan’s son). They worked with other inmates to understand how Preemptive Strike could alter criminal records to such an extent.

They also fought together in prison brawls, and when there was a big riot and breakout. 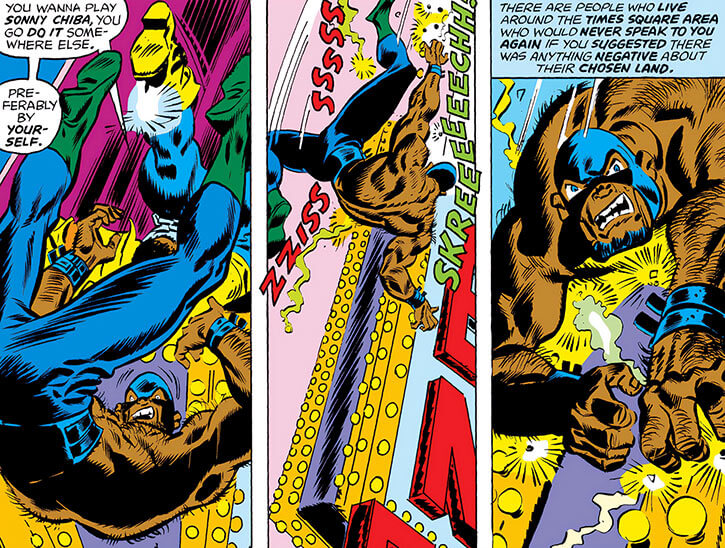 After he got out, Rand offered jobs to his prison allies. Shadrick Daniels was among those who took the offer.

He became the foreman of a small construction crew working for the Heroes for Hire. They were kept busy rebuilding the oft-thrashed HQ of the Heroes.

Mr. Daniels and his crew also saw Cage and Iron Fist dismantle Preemptive Strike. And figure out — with the help of Señor Màgico — how the fake criminal records had been done. This likely cleared Mr. Daniels’ name.

The former wrestler also prevented Jennie Royce and his employers from being sucked into a demonic dimensionOther realms of existence that are not our universe..

When the Heroes for Hire’s HQ was attacked by Tombstone, Alex Wilder and Mister Fish, Daniels took down Fish. He was incensed that Fish had punched Royce out.

Shadrick Daniels hasn’t been seen since. He and his crew likely still work construction in New York City.

Originally, Mangler had a shaved head and a chin pubes.

By 2016, he has short hair and impressive muttonchops.

In 1976 he was an uneducated, impulsive brute.

He wasn’t really a bad person. But he had strong emotions, a temper, and a specific set of solutions to problems. Namely punches, holds, drop kicks, headbutts, flying body blocks…

Between the lines of age

Between 1976 and 2016 he calmed down. He still has a temper, but this is mostly intervening when seeing something unfair or when provoked. If not roused to ire, he’s a reasonable man trying to do the right thing.

He also seems to have received remedial education. His diction is far less, well, mangled. And while he’s no PhD, he doesn’t come across as particularly ignorant anymore. Just a regular working feller in his late 30s. 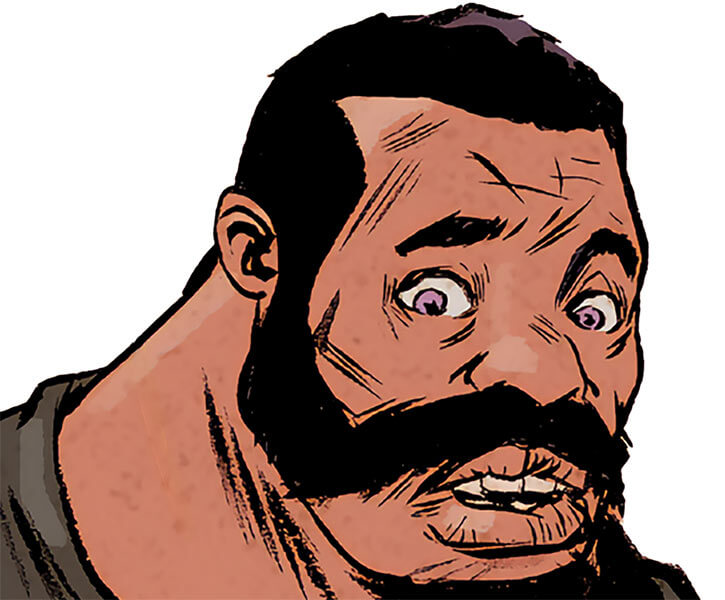 “[I’m the] Mangler ! Whatsa matter, can’t’cha hear right ? Usually I get a lotta response when I enter a ring. Cheers an’ hisses. The whole works. An’ a big spotlight follas me around.”

“My brother, he don’t know I’m here. He thinks I’m slow or somethin’ and he don’t want me mixed-up in this… But Jack was my brother, too, ya unnerstan’ ?”

“Thanks, man. We’ll be done rebuilding the outside wall later today. Then we’ll get started on remodeling the interior.” 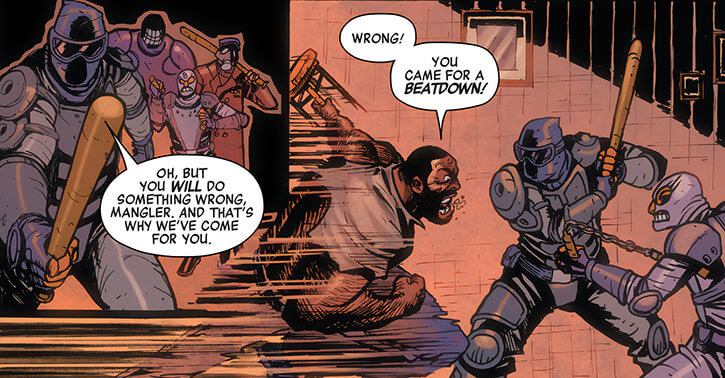 He seemed a bit less formidable in 2016. But not that much – removing his Acrobatics Skill likely suffices.