Depaul possesses the same regenerative powers that his clone progenitor Paul Kirk had. He is also a formidable martial artist and acrobat, perfectly able to match Nightwing or to give Batman a good fight. His hunting and military skills also seem to be at the same level as Kirk’s.

He has lots of connections with the underworld and some African governments.

Kirk DePaul was originally one of Paul Kirk’s many clones. These were created by the criminal Council to be their enforcers. When Kirk rebelled against the Council, DePaul was sent against him. But he wasn’t as evil or fanatical as his other “brothers” and deserted.

He reappeared some time after Kirk and the Council destroyed each other. He worked as a mercenary in the African republics of Oranga and Bwunda for a while. The clone then became a spy working for criminals, revolutionaries and governments under cover as a safari guide in Kenya and Tanzania.

Two years ago (at least in the framework of the official DC comics timeline) he started a criminal network in Kenya, working with stolen goods. He took part in the trade of stolen plutonium. But when Nightwing became involved, he stole the goods (after being paid) and gave them to the superhero.

DePaul finally settled in San Francisco and joined the Power Company as a full partner. His personality often clashed with Skyrocket, the idealistic member. But he was generally on good terms with Witchfire and a friend of the more pragmatic Josiah Power.

Shortly after joining the Company, DePaul was attacked by Nitobe Asano and Christine Saint Clair, Kirk’s allies against the Council, who wanted to kill the last evil clone. DePaul convinced them to give him a chance to show them that he was different. He even gave them a bullet for killing him if it ever became clear he was a bad guy. 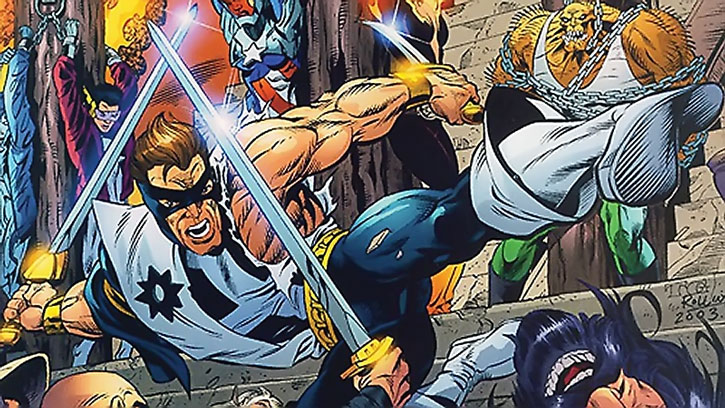 After Josiah Power was shot and fell into a coma, Manhunter used his own unethical methods to keep the Company working. He lied about the menace of the fascist group Shadowspire to corporations to get new customers. And when a paranoid actor contracted them to protect him from that group he took the deal, leaving the rest of the Company to fight the menace of Dr. Polaris and his Cadre.

But when Polaris started winning that fight, Manhunter came to the rescue. He saved the day thanks to filthy tricks and manipulation. He justified that unusual behaviour saying he has invested too much in the project to simply let them die.

During a solo mission in Gotham City, Manhunter was pursued by Batman, who believed he was there to assassinate an African leader. Manhunter did very little to convince Batman that he was wrong to make this assumption. The battle moved across Gotham until Manhunter led it to a boat where the granddaughter of the African president was being held.

There, Manhunter and Batman joined forces to defeat the kidnappers. After the rescue, Manhunter explained to Batman that he had been hired to save the child.

Some time after the Power Company’s last battle, DePaul was apparently murdered by Mark Shaw. Shaw had suffered a breakdown and resumed his Dumas persona.

Much of DePaul’s personality seems to have been build in opposition to Paul Kirk’s. If the original Manhunter was altruistic, he is a greedy, highly opportunistic, somewhat unethical (more than immoral) merc. He is also egoistical, arrogant, self-assured and a trickster, and doesn’t feel sorry about it.

He also won’t fight if there is no tangible benefit to be earned. 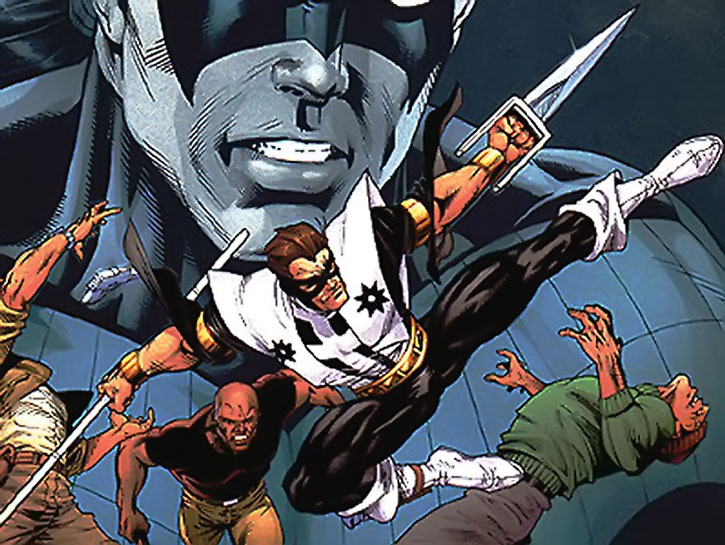 As a veteran mercenary, DePaul knows that the most important is being paid, and that will be his priority. He has fought many years to achieve his current state of wealth, and wants to keep it at any cost.

His materialistic attitude was often a source of fights between him and Skyrocket. Despite it, he recognized her as an able leader and followed her orders on the battlefield.

Inside him, however, there are perhaps hints of a better person. For example, when the Power Company was in danger, he left a lucrative contract to save them. Of course he justified that action by saying he had invested too much in the Company to leave them die.

Manhunter is in good terms with the other members of the group (except Skyrocket). He often works as some sort of mentor in the “greedy side of the Company” for the young Stryker Z.

“By talent, training and genetic design, Manhunter was created to be a deadly weapon no matter what he’s armed with.”

“There have been several Manhunters, but I know the one you mean. He was very good — had a good reputation. I’m very good, too — and I don’t… You have a problem with that ?”

(DePaul berates himself as he leaves a lucrative job behind to save the Power Company) “They’re idiots ! IDIOTS ! They could’ve had a cushy job — high pay, no danger — but they charged off to get killed by someone Superman should deal with ! IDIOTS ! And who’s the idiot going after them ? Who’s the drooling, mouth-breathing moron— ?”

“Skyrocket… SHUT UP ! Look. You need to get something straight, once and for all. Maybe you think the Power Company is all a big support structure for your idiotic quest to waste your life saving idiots, ingrates and losers from any moron with a mask that might happen along… But it’s not”.

(To Batman): “Trust me, spooky… If I’d wanted to go around you, you wouldn’t have seen so much as my shadow”.

The Manhunters’ history could be moved to the Marvel Universe without problems, perhaps changing the Council to HYDRA and Batman to Captain America. DePaul would have joined the Wild Pack at some point and started an episodic relationship with Silver Sable, who has a terrible taste in men.

A jealous Foreigner killed him at some point, dressed as a member of his killers’ club. 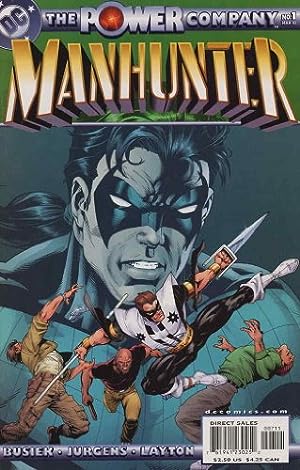 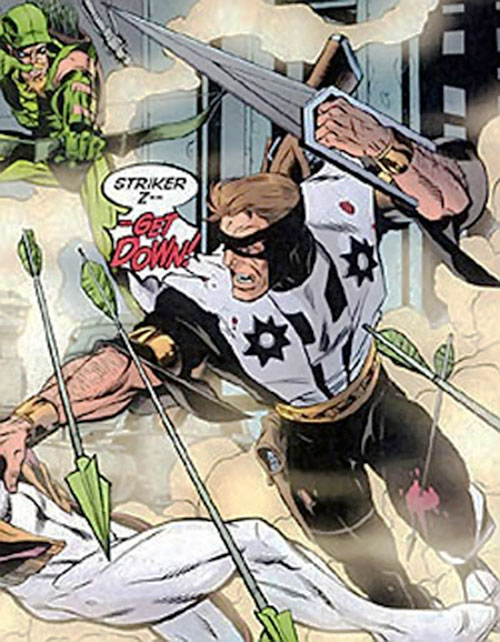