It was a John Ostrander & Kim Yale series, in a similar vein to their other book Suicide Squad. This thriller had a dedicated fan following, and certainly felt more modern and grittier than most of DC’s releases back then.

This character profiles are really old notes. We really liked the series, but doing profiles was much less demanding back then. Furthermore, it was done before further evolutions to the Manhunter mythos. Including the “Wild Huntsman” spirit thing.

He is also an expert in tracking, espionage, and counter-intelligence. Furthermore, he was trained to in Oan technology and science.

However, perhaps his most powerful weapon is his keen, devious mind.

Mark Shaw was actually born Mark Fletcher, son of Hugh Fletcher, a two-bit crook called Outlaw. When his father was killed in a failed robbery attempt, his mother Rose took her son and fled. Eventually she met and married Eliot Shaw, a lawyer, who adopted Mark as his own son.

Mark grew up and became a defense lawyer, like the rest of his family. A brilliant lawyer, he soon became disenfranchised with the legal system, where he saw corruption and the suffering of innocents.

At a loss of what to do, his uncle (a Manhunter agent) introduced him to the Manhunter cult. His passion for justice and frustration with the legal system blinded him to the evils of the Manhunters and he became Manhunter Prime. He was sent to join the Justice League and work at them from within.

When the Cult was later exposed, he pretended to abandon the Manhunter cult. He adopted the identity of the Privateer. He continued to work with the League, until he was exposed as having been working against the JLA as the villain called Star-Tsar. In prison, he worked with a psychologist named Simon LaGrieve who was able to help Shaw break the Cult’s influence.

He jumped at the chance to work with the Suicide Squad in order to gain his freedom and more importantly, his self-respect. After the mission, he refused Waller’s offer to lead the Squad and struck out on his own to redeem himself and the Manhunter name.

Shaw then worked on and off with the Squad and as the meta-human bounty hunter called Manhunter. But he later retired both the name and the costume in the wake of a horrific retaliation by the shapeshifter Dumas.

After an unchronicled adventure or two as, more or less, a plainclothes superhero, Shaw was recruited by Sarge Steel to act as a double-agent among various terrorist networks. For this, Shaw took on the identity of his fallen foe Dumas, and took control of the shapeshifter’s operations.

Meanwhile, Steel groomed another man to take Shaw’s place as Manhunter. He then sent him on a suicide mission against Eclipso where, predictably, he died. When Shaw learned of this, he was horrified, and cut all ties with the government.

For months, it was assumed by most that it was Shaw who had died at the hands of Eclipso.

Shortly thereafter, Mark saved a man from a heart attack. This man was, coincidentally, Star City musician and current bearer of the Manhunter name, Chase Lawler.

Lawler’s near-death experience weakened his bond with his “Wild Huntsman” spirit, and the Huntsman accidentally bonded with Shaw before the latter left. This turned Lawler into the new Manhunter.

When working Manhunter wears a his high-tech mask and padded armor colored red and blue, complete with hood and tassels. He is never without his power baton and several tricks up his sleeve. He also occasionally uses Japanese weaponry exclusively, due to honor.

When not working he wears expensive clothing suiting the situation, from suits to casual wear. He is also known to smoke a pipe on occasion. A tall attractive man, Shaw does not smile very often, unless the situation requires it.

Mark Shaw, due to his past, is constantly trying to convince himself, and others, that he is cold-hearted mercenary. Unfortunately, his actions speak otherwise. His passion for justice still exists and is as strong as ever, even though he tries to hide it.

However, on the occasions where his friends or family have been threatened, he has shown the ability to tap into his darker side and fight with a cold vengeance.

Shaw has a quick, dry wit that turned increasingly caustic as time went by.

“I’m a businessman, not a superhero.”

“It has been said that criminals are a cowardly, superstitious lot… I might add, that they’re not too terribly bright, either !”

“Smug ? I suppose I was, just a bit. After all, I’d beaten Dumas without having to throw a punch and that suited me just fine. I’m not nuts about violent confrontations with no money in them. All in all, though, I shouldn’t have dawdled on my way out.” 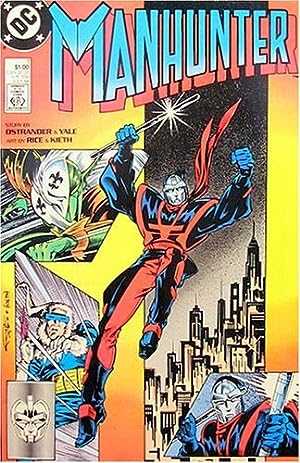 The sadly uncollected 1988 Manhunter run by Yale and Ostrander 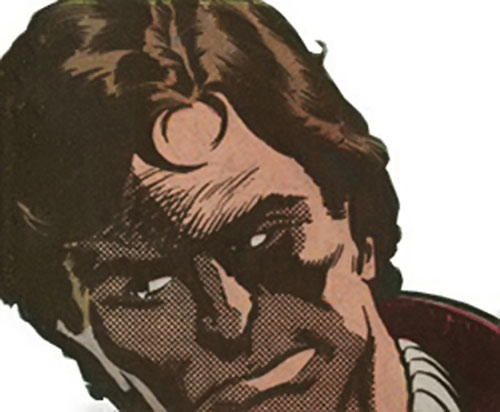 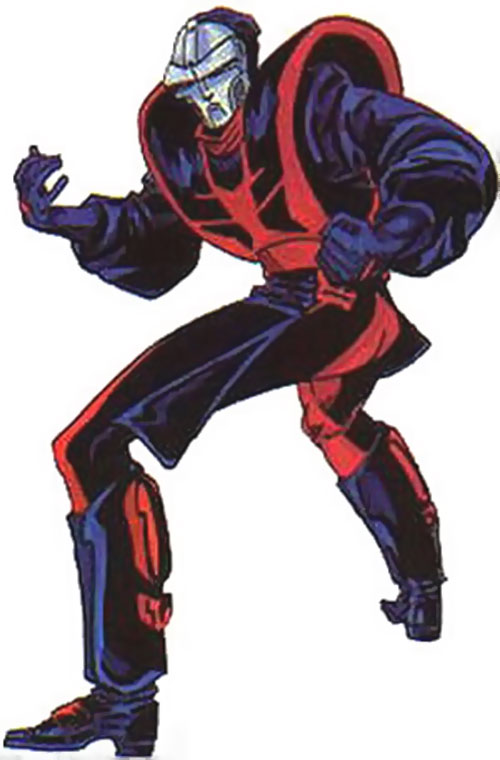