These are older, rough notes using the Mayfair stats and some basic information to clear the path toward the second Manhunter (Paul Kirk) character profile. Ideally, we’ll have a more fully researched profile replace this one someday.

Manhunter (Kirk) was an Olympic-level athlete who relied solely on his great skill at hand-to-hand combat. Like Manhunter (Richards) and many other heroes of those days, he was the omni-competent type. Manhunter could tackle any situation with great know-how and effectiveness. He was known, with ample reason, as one of the greatest trackers and hunters of his century.

His physical strength was indomitable and his senses formidably acute.

In the 1930s, Paul Kirk was a wealthy and highly talented big game hunter and sportsman. His abilities came to the notice of a group of alien trackers known as The Manhunters. These had been the forerunners of the Green Lantern Corps but had long since gone renegade.

At the end of the decade, ennui started to settle. Hunting no longer challenged Kirk, who was well-established as being the best of his day. However, during a discussion between Kirk and a friend, police inspector Donovan (himself a Manhunter agent), Donovan argued that criminals were more dangerous than all of the beasts Kirk had ever hunted.

The blasé Kirk considered the idea of hunting criminals a true, new challenge. He thought about the concept more and more often. The Mahunters approached the Great White Hunter, and Kirk would soon adopt the “Manhunter” name. In this capacity, he wore a costume almost identical to those worn by the Manhunter androids.

After Donovan was killed by a costumed criminal known as the Buzzard, Kirk donned his Manhunter costume and brought the Buzzard to justice. While this all made him a part of the Manhunter secret society, Kirk had little contact with other Manhunter agents. For instance he did not frequent Dan Richards, also calling himself Manhunter.

He would later join the great corps of American super-heroes of the early 1940s, the All-Star Squadron, and work among those mystery men and women fighting for the war effort.

At one point, Manhunter was involved again with the Manhunters cult, which sent him and Manhunter (Dan Richards) after Green Lantern (Alan Scott) after telling them that he was a traitor.

Later during the war (early 1944, apparently), the government requested that Kirk give up his two-fisted crimefighting efforts to conduct secret OSS missions behind the enemy lines. Those missions were deadly, bloody, violent. They did not bring the sense of adventure that the Manhunter’s previous exploits had. Disgusted, Kirk abandoned his Manhunter identity and went back to Africa.

For some months, Kirk still wore the costume. During that time he trained, mentored and slept with the teenage villain the Tigress.

The spirit of the hunt was gone, though. Eventually he couldn’t even bring himself to shoot a prey, purposefully missing the beast. This stray shot, however, panicked a nearby bull elephant who unexpectedly charged and trampled Kirk, apparently killing him.

But can even death be the end of the Manhunter ?

With all due respect to Simon and Kirby, Manhunter II was the cliché of his days – the bored socialite who puts on a costume and becomes a formidable fighter and superior detective. He does a lot of “tough super-confident guy” one liners, as the quotes illustrate, usually with a hunting theme.

He even says stuff such as “the hunt is over, my foul friend !” and does not hesitate to commit atrocious puns to underline how cool and confident he is. All. The. Time.

“Bullets never bother me until they hit me !”

“Have some knuckles, boys. I’m passing them out free !”

Compiled By Sébastien Andrivet making small improvement over the one by Ray Winninger for Mayfair.

Source of Character: Adventure comics and other comics in the DCU. This version of Manhunter is a Joe Simon/Jack Kirby creation. 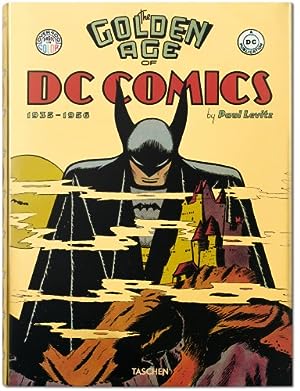 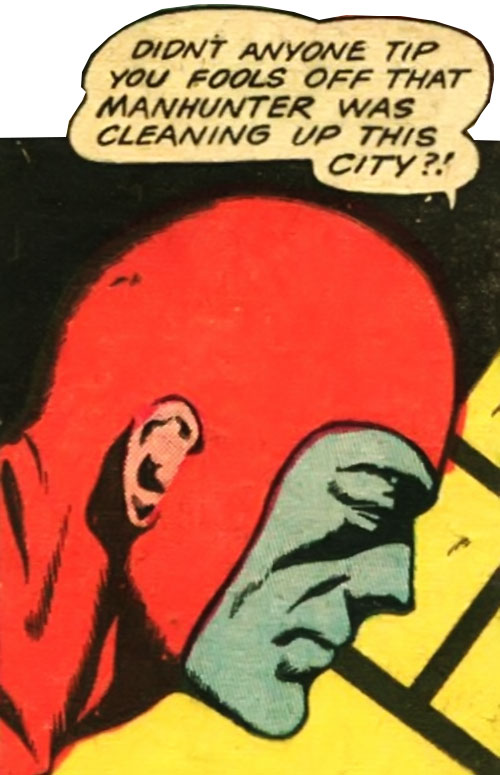