Marco is one of the best capoeira  mestres in Brazil. Against thugs, he favours powerful kicks launched at unexpected angles, often from the ground.

He’s skilled enough to face multiple armed opponents. However if guns are involved he prefers to knock out an opponent, grab their gun and force the others to throw their weapons away at gunpoint. So he can engage them in hand to hand combat.

Marco is one the same general level as people like the Question or John Butcher. So he’s extremely competent, but still realistic. Marco’s on the level of a cinematic  martial arts protagonist.

Marco (maybe not his real first name) is a Brazilian master of the martial art of capoeira. He favours unarmed techniques. His father was an American criminal who fled to Brazil. He was killed when Marco was but a child. Still, he knew his child long enough to teach him adequate English.

Marco has also indicated that he can “beat anybody around here”. Which is not a mean feat in a country known for its many reputed schools of free-form martial arts.

During the 1980s, Marco was challenged to a duel by Lady Shiva. She wanted to learn about capoeira. Obviously, Shiva defeated Marco. But he interested her enough that she agreed to a rematch. However, Marco would have to earn that right by defeating a better martial artists than himself. When he asked whom, Shiva told him Vic Sage, aka the Question.

Marco prayed for God to send him Vic Sage. And one morning, he stumbled on him deep in Brazil, saving Sage from an ambush. However Sage was wounded in one arm, which wouldn’t have made a duel fair. Furthermore, he was attempting to get back to the US to get medical relief for the young child who was traveling with him – Jackie, Mira Femin’s daughter.

Marco readily agreed to help him reach the US, provided they would fight there.

Marco and Sage made it to Hub City, which was in a state of chaos approaching civil war. They had to reconquer the hospital from a large band of biker who had taken over to empty the stock of drugs for recreation.

The Question and Marco cleared them out, but Marco was nicked in the arm in the brawl. This gave him an handicap equal to that of the Question, and Sage, out of respect for his new friend, accepted the duel.

The duel between Marco and the Question left them both badly battered. The outcome wasn’t conclusive – although they seemed to agree that Sage had won by a small margin. Marco decided to stay a bit in Hub City with his friend. Hub city offered many, many opportunities for violence which could teach him something. Plus, he liked “Miz Fermin”.

The Question Quarterly ceased to be published at this point, and Marco disappeared into comic books limbo .

Marco is something. He’s laid back, confident and makes it obvious he isn’t playing in the same class than most people since he’s so much cooler.

Martial arts are everything for him. He enjoys getting into fights, and duelling against other masters. He also is a big fan of even the worst martial arts movies (his favourites are Steven Seagal movies).

Since he puts his obsession with hand to hand combat, martial arts and learning new techniques above anything, he can come across as somewhat crazy.

He really enjoys any story with fighting sticks, swords, ninja, badass fighters with improbable backgrounds, revenge stories, etc.. He sometimes provides such tales as a fertile storyteller. This is easy for him, since he’s a movie martial artist in his own mind.

Marco is intuition-driven. He doesn’t worry much about anything, and does whatever feels cool and interesting. Even if that involves traveling two thousand miles over dangerous land in an old truck.

He seems to be rather religious, and routinely offer short prayers to Saint Bruce, saint patron of martial artists. At least according to him, as Bruce Lee hasn’t been canonised as far as I am aware.

He has a readily noticeable Brazilian accent, and his English grammar is approximative, but doesn’t really care. He spend too much time training and keeping in shape to learn, and most people he meets don’t have any greater command of English anyway. Marco says “man” a lot, in a vaguely Rastafarian way.

Marco is pretty charismatic, and seems to be a hit with the ladies.

Vic Sage : “Marco, would you be offended if I told you i think you’re more than slightly crazy ?”
Marco: “No, thass okay, man.”

(Facing a pair of armed bikers) “You got anything to show me ?”

Marco: “Man. This is gonna take weeks to heal. Whey’d you have to go and let him do this ?”
Sage: “Look, I appreciate your help. But, why the hell do you care ?”
Marco: “’Cause I gotta fight you. Maybe to the death, man. How’m I gonna do that if you got a bad arm ?”
Sage: “Why ?”
Marco: “Why you gotta bad arm ? ‘cause he cut you ! Man, you are one dumb shit.”
Sage: “No, why do we have to fight ?”
Marco: “’Cause I’m the best martial artist in Brazil – Master of Capoeira.”
Sage: “The art based on dance?”
Marco: “It ain’t based on hopscotch, man. Anyway, I beat everyone from around here. I’m prayin’ I could have somebody else to beat. Prayin’ to the patron saint of martial artists.”

“By the way, I did not lie about never harming a soul — but bodies… I tear the hell out of those.” (Throw gun away) “Come on I’ll show you.”

“I thought you said there’d be combat, man. That was too basic. I din’t work up a sweat.”

(After being shot in the arm) “You call this hurt, man ? You think this is hurt, you don’t know hurt.” 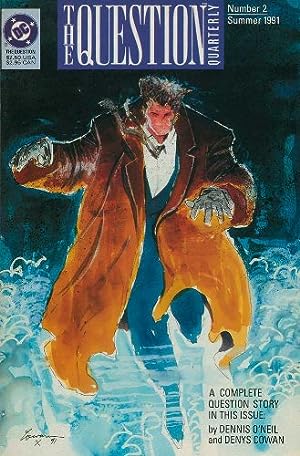 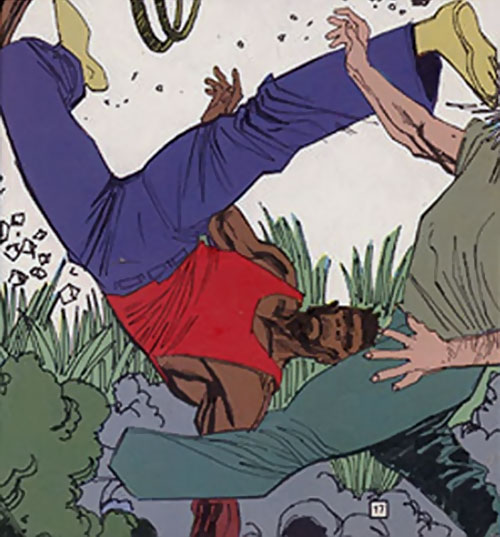