Marcus is a character in the classic 1998 video game Fallout 2. He returns later in the series (in Fallout: New Vegas) but at this point this profile only covers his FO2 appearances.

If you’re not familiar with the setting, we suggest that you first read our sample Vault Dweller character profiles (which also explain the setting) then the generic super-mutant article.

Marcus is an unusually successful super-mutant enhancement. He has the usual abilities :

Marcus is faster and even tougher than most super-mutants. Furthermore, his intellectual and emotional acumen do not seem to have been lowered. This leaves him significantly sharper and more sophisticated than the vast majority of super-mutants. And humans, for that matter.

His mouth is also less disfigured than most of his kin. This allows him to articulate clearly and speak at length without discomfort. He’s in fact quite articulate.

One person in Broken Hills hypothesizes that the radioactive emissions from the uranium mines are what is keeping the local mutants unageing. This is hogwash – both ghouls and super-mutants naturally age very little.

Marcus wears a leg brace (very much like the one Mad Max has to use). This implies that his small regenerative power cannot repair joints that have been too damaged. With this wound, he cannot run or even walk particularly fast in most circumstances.

He will become markedly more mobile in combat, though, thanks to adrenaline. So presumably it’s more a matter of pain and avoiding to worsen the damage, and he ignores both factors when in a firefight.

We got the gun

Marcus’ skills list in Fallout 2 is very short. This may indicate that the long-lived mutant has forgotten many of his skills due to lack of use. He is, however, real good at hand-to-hand combat and heavy weapons operation. So perhaps he was a soldier or fighter before he became a super-mutant.

Like most of his kin, Marcus is too large to use ordinary firearms or even ordinary melee weapons. However, super-sized weapons intended to be wielded by power armour  infantry are about right for super-mutants.

Marcus likely was one of the super-mutants serving the Master who were issued a Rockwell CZ-53 5mm minigun . He still wielded this six-barelled, high-rate-of-fire contraption when he met the Chosen One. The CZ-53s were being phased out when the world was destroyed, so the Master presumably located a warehouse full of retired miniguns for his gigantic servants.

Our sample Chosen One (Alessandra-Maria Hassan) equips Marcus with a Bozar instead, since the Rockwell CZ-53 devours ammunition at an impossible rate. See the Fallout Weapons Locker article for both these weapons.

Other light machineguns and squad support weapons are given to Marcus by those players without access to the Bozar. Unless they’re sitting on a mountain of 5mm rounds, or are reduced to have him go unarmed for lack of suitable ammunition.

In 2162, Marcus was one of the super-mutants serving the Master. No data is available as to what he did before that.

Though the bulk of the Master’s super-mutant army was still standing, they dispersed in disarray. Most fled Eastward. Marcus ended up alone, and slowly drifted Northward looking for other super-mutants.

Marcus eventually ran into a lone Brotherhood of Steel paladin named Jacob. Roving in his power armour, Jacob was on a crusade to kill all mutants. Thus, they fought for hours and hours, but neither could get an advantage. In the end, they decided that it was all bullshit and they should ally.

Many wastelanders who came across the duo decided to follow them. In their view, being on the side of an elite soldier with power armour and an elite super-mutant trooper meant a certain safety.

The pair agreed to protect these people, and Marcus came up with a plan.

Marcus specifically came to Broken Hills  based on pre-War maps, to locate and reopen the uranium mine to create income. He was successful, and what was once a dismal non-place with famished survivors greatly changed. However, within a year Jacob decided to move on.

The super-mutant played a critical role in rebuilding, defending, running and developing Broken Hills. Over the decades the burg became clean, stable and prosperous by Wasteland standards. It even had neat rows of comfortable brick houses with air conditioning.

Marcus’ presence also meant that mutated persons were safe and welcome. Various ghouls and super-mutants moved in and cohabitated with baseline humans, which was quite remarkable back then.

Super-Mutants tend to work as miners and serve in the militia. There’s also a sort of retirement home for ghouls who are too decrepit to function on their own. Ghouls are also valued as workers in the small uranium processing centre.

Processed uranium is used in Broken Hills’ power station, but most of it gets exported to regional nuclear reactors such as Gecko or various NCR cities.

Though Broken Hills was calm on the surface, racial tensions remained a reality and occasionally led to murder and terrorism. Marcus made sure to maintain a rule of law, arresting rather than killing and trying to remain even-handed.

What sort of judicial system Broken Hills has is unrevealed, though mixed human/ghoul/mutant juries are a likely feature.

The trouble with the tribal

Circa 2242, the Arroyo tribal anointed as the Chosen One came to Broken Hills. Marcus probably ended up joining them on their quest, depending on the playthrough.

For a *possible* version of these events, see our sample Chosen One writeups.

Marcus is known to have survived these events. He reappears in later Fallout video games, but this profile doesn’t cover that yet.

“A burly old mutant”, or so the game tells us. Marcus is voiced by Michael Dorn, prolly best known as Worf on Star Trek.

Marcus shared the general goals of the Master – to put an end to human infighting and pettiness and evolve them all to a new, better level. However, he thinks that the Master did not manage the plan well. He mutated too many people who couldn’t handle the strain and ended up too intellectually diminished upon exiting the FEV vats.

Even generations later, Marcus remains a true believer. He would welcome a project to turn a vanguard of smart, mentally strong people into a super-mutant vanguard capable of using their powers to make the world a better, less fractious place. But he accepts that this is no longer possible, that the Master is dead and that the world has moved on.

Since Marcus was aware of the Master’s flaws, he does not resent the Vault Dweller for having destroyed his boss. In fact he admires the Vault Dweller as somebody who fought hard, and successfully, for her vision of a better and safer world.

The old man and the wasteland

Marcus doesn’t remember much about his time as a human. It was too long ago, and the trauma of the FEV vats likely didn’t help. But he doesn’t remember a particularly good life, and thinks that his life as a super-mutant is better.

Marcus greatly misses his best buddy Jacob. They only adventured together for two years or so, but decades later Marcus still reminisces about his discussions and arguments with Brother Jacob.

The super-mutant appears to be a fair and responsible sheriff and mayor, and to have a good head for community development. But though he was doing a great job, Marcus eventually grew bored with his responsibilities.

“[We came here looking for the] uranium mine. I knew there was one around from old maps. Now anybody’s welcome here – ’long as they act right. Others might not think much of us, but nobody’s more free than we are. There ya go.”

“Right. Me and my deputies will take it from here… And, thanks. I don’t forget things like this.”

“The Master wanted to elevate everyone to his level, so we wouldn’t fight each other anymore. He was convinced we wouldn’t do it by ourselves – couldn’t. We had to be forced to evolve.”

(Looking at the street menagerie of New Reno) “Now this is a fine example of why the Master was right.”

Drawbacks:
Distinct Appearance, MIA toward opening fire even if friendly fire and collateral damage are a risk, MPR (Marcus wears a leg brace, and will walk slowly in most circumstances), Misc.: super-mutants are sterile, Misc.: Marcus is too large to use most equipment, especially body armour.

When being intimidating, Marcus simple use a Force Manoeuvre. He doesn’t have to *do* anything to use this Manoeuvre, his sheer size and appearance will suffice.

The listed APs of Charisma are there in case you’re using Skilled Character Interaction house rules.

Writeup completed on the 1st of February, 2017. 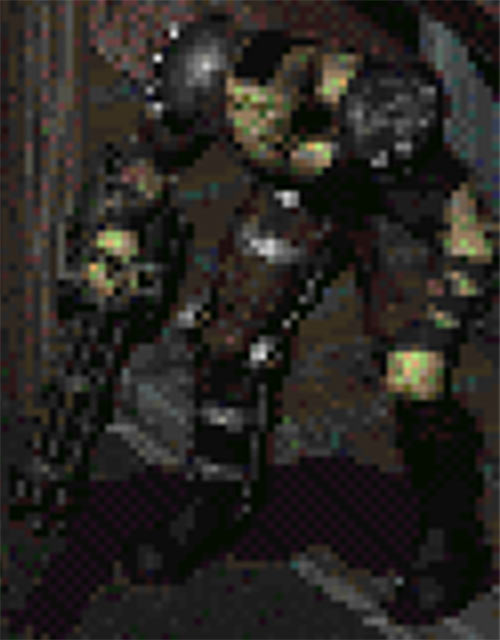