Miss Lane has had an interesting life, and possesses the skills to show it.

She can drive, she can shoot and presumably has other physical skills. Though she’s not a hand-to-hand fighter or a hardened combatant, she is taller than most women of her generation.

More importantly she’s good at seduction, manipulation, intelligence gathering, legwork and acting. This makes her a skilled spy and scout for the Shadow. Especially since she has some familiarity with the criminal underworld and some other less-than-respectable scenes.

Margo can take the huge stress that comes with undercover infiltration work. She also demonstrated noticeably above-average willpower that allows her to “dodge” the Shadow’s power of mesmerism by breaking eye contact in time. She is superiorly intelligent and resourceful.

Margo usually goes armed. Her handbag includes a derringer (presumably in .41) and a dozen spare bullets.

The Shadow also gave her a trick compact. Though it’s presumably useless as makeup, the two powders therein form a binary flash powder. The usual use is for Margo to rub a (gloved !) finger in both powders in turn, then snap her fingers. This detonates the power in a blinding flash.

Margo Lane is the daughter of Henry Lane’s second wife. She was born in 1903 in Boston. A scion of the Boston society, Henry had inherited his father’s prosperous lumber and shipping company. However, he was unable to manage it.

It crashed and burned during the early 1920s. Mr. Lane drank himself to death soon after.

Albeit a child of privilege, Miss Lane couldn’t stand the thought of being a debutante and getting married off to some rich guy. She wanted control over her life, freedom, and to have fun. However, her Boston Brahmins  friends vanished when her wealth did. And she refused her main remaining option – marrying down.

Instead, she travelled the world. She used her beauty and people skills to become the “friend and companion” of a long list of wealthy men looking for some no-strings-attached fun, and with money to burn.

But even though she kept moving, her reputation snowballed. It eventually caught up with her. By 1929 or so, she had to face the most dire fate possible for a Bostonian – coming to live in New York City.

With her reputation as a woman of loose morals, Miss Lane couldn’t find a respectable “patron”. She had to settle for Giuseppe “Big Gun” Massaretti, a rich bootlegger and major Mafia don.

She milked him for quite a sum in classy hotels and gifts. But her insatisfaction with her situation made her snarky. He thus tired of her, dumping her in early November of 1929.

Out of options, Margo attempted an ill-considered gambit and pretended that she was pregnant. Massaretti just decided to have her executed by his men. She was saved in the nick of time by the Shadow, who killed the thugs. The vigilante had a taxi drive Lane away after she fainted.

However, Margo Lane was familiar with Lamont Cranston, who had been one of her conquests a few years prior. This intimate knowledge led her to realise that :

Still out of options and now kicked out of her fancy private hotel suite, Lane barged in at Cranston’s estate. She brazenly confronted him with her knowledge.

I want to be a part of it, New York, New York

“Lamont Cranston” attempted to mesmerize Lane to get rid of her. But she resisted his hypnotic influence. Therefore, the Shadow recruited her as his second agent after Claude Fellowes.

Margo was primarily a spy for the Shadow. She also posed as “Lamont Cranston”’s lover to help him maintain his cover. However, by the Spring of 1930 they had actually become lovers.

In the same general time frame, Margo attempted to locate Massaretti on her own – as she felt under-employed by “Cranston”. The don had been escaping the Shadow for weeks, as he had become a puppet for the psychic Doctor Zorn. 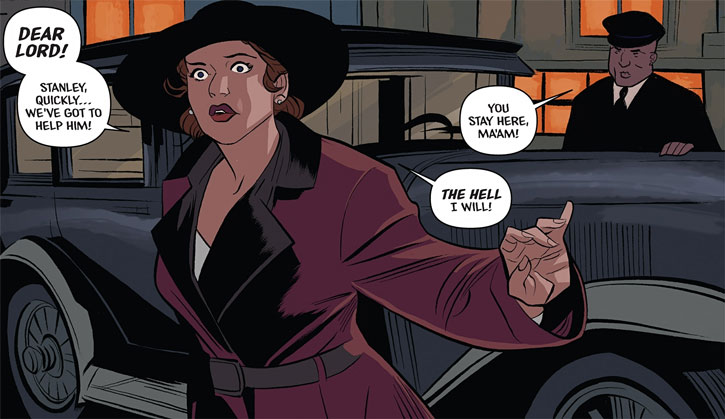 Though Lane was successful, “Big Gun” spotted her. He had his men take her to the Empire State Building construction site to execute her.

Thankfully, the Shadow had anticipated that Lane would take such an initiative. He had been trailing her. This allowed him to intervene in time. This saved Margo’s life, though she was forced to kill Don Massaretti during the fray.

These vagabond shoes, are longing to stray

Albeit her involuntary showdown with “Big Gun” Massaretti cost the Shadow a precious source of information, it also hardened Margo. That made her even better as an agent.

She thus was able to play a more active role in the final hunt for Doctor Zorn. She helped Allard realise that his sworn foe was in Chinatown. Margo then saved their chauffeur Stanley’s life after he was shot whilst helping a wounded Shadow.

She almost killed Zorn by out-driving him. But he survived – only to be slain by the Shadow.

Since Margo Lane is more active in this continuity, one gets the impression that she might capture some of the action that went with Harry Vincent  in the vintage stories. Or even outright replace Vincent in the narrative, though that is less likely.

Margo is usually dressed in expensive, tasteful clothing emphasising her elegance and full curves. She usually wears her hair in a fashionable 1930s style – often some sort of bob, though that changes with remarkable frequency.

Her manners, clothing and diction make it obvious that she has a upper class background. Her covers usually rely on this rather than attempt to conceal it, since many working class criminals with aspirations of respectability are fascinated by such a “classy broad”.

Margo seems to be chiefly driven by a joint desire for freedom and an exceptional life. She refuses to stay in place and behave as expected. Ms. Lane will use whatever degree of freedom she can grab to cobble an exciting, cool life for herself.

She also strives to always look classy and in control. And she is willing to take considerable risks if it seems to be worth it.

She was never much for conventional morals, since those have a marked tendency to objectify her. However she’s fully aware that she was just a top-shelf prostitute. Although she prefers the “friend and companion” euphemism, which echoes the formulation used in the radio serial.

By the time she became a New York City underworld moll she was nearing becoming a criminal herself since she had nowhere else to go.

Miss Lane is fascinated by the mystery, strength and power of the Shadow. In many respects she is his #1 fan, even though she’s the person on Earth who has the closest and most accurate understanding of him. She soon fell in love with him, though it took a few months of work (and some luck) for him to reciprocate.

Margo came to share the Shadow’s passion for justice, albeit not with the same intensity. She believes in his cause, and is willing to face immense danger to support his fight.

Like the Shadow, she’s pretty much devoid of racial prejudice compared to her contemporaries.

She considers that “the Shadow” is her lover’s truest name. But she usually goes with “Lamont” in everyday life out of convenience and to maintain cover.

Margo was raised a Methodist.

Though shooting Giuseppe “Big Gun” Massaretti dead hardened her, Margo Lane is no killer. She can shoot straight and operate under pressure, but deadly violence sickens her.

(Bored between missions) “You know, if I wanted to be a housebound wallflower… I could have achieved *that* stunning feat all of my own. Without all the target practice, secret gadgets and vows of fealty.”

Popular fiction during the XXth century could be quite formulaic. Some versions of Margo(t) Lane, particularly in the novels, thus fit an archetype of female characters that was popular in super-hero comic books until the 1970s or so.

The archetype will be familiar to super-heroes fans as the pre-Crisis *Lois* Lane. Always trying to prove that Clark Kent is Superman, getting her adorable nose into all sorts of troubles out of brainless curiosity, and generally being more like a pet.

It is thus hard to resist the notion that, if sharing a universe, the two Lanes are closely related. The specifics would depend upon which versions of Margo(t) and Lois, using which which chronology, one employs.

In a Golden Age  setting they would presumably be sisters. In a more modern setting you get the possibility that Lois Lane’s grandfather might be the Shadow. She clearly didn’t inherit the nose, though.

Before she kills Massaretti, Margo has but 005 HPs to her name.

Source of Character: The Shadow: Year One from Dynamite Comics. 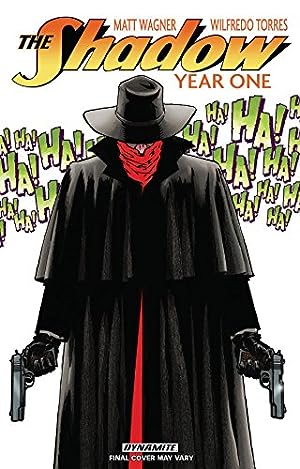 The Shadow: Year One omnibus collection