As far as one can discern, the Marhault (or “Marhault Ogre”) is a gigantic ape-like creature. Some rough ratios drawn from the art, and quick extrapolations from the height/weight ratio of a gorilla, lead to the height and weight above.

It is not necessarily smarter than a gorilla (which are fairly smart). But there’s some way to communicate with it since it could be told to attack a given person. Presumably it was shown a photo of its target, or given a personal item to smell.

The ogre seemed stronger than Kevin (though that was before Mr. Matchstick started wielding Excalibur), which presumably means “Class 20” strength. It ignored being hit with a baseball bat, but could be hurt by Kevin’s “Class 10” strength.

The Marhault is impossibly quiet for its size, and an excellent and quick hand-to-hand fighter. Our game stats assume that it has the sense of smell and climbing ability of an ape.

The ogre is apparently very difficult to kill. If it takes damage that should be fatal, it will be shunted back to its home dimension  after laying around corpse-like for less than a minute. Once back home it will presumably fully heal.

Summoning the Marhault from the faerie realm is quite difficult. The Umbra Sprite barely managed it, and was dazed and wobbly afterward. Mirth the World Mage had assumed that the Sprite didn’t have the power to actually perform the summon. In DC Heroes terms, both are a strong sign of Hero Points  use.

Early during Kevin Matchstick’s heroic adventures, his opponents summoned the deadly Marhault Ogre, a creature from the realm of faerie. It was sent to attack Kevin, Edsel and Mirth as they were discussing in a small stadium at night.

Our heroes narrowly defeated the ogre, though Edsel was wounded in the fray (and would have been killed without Mirth). Kevin thought that he had killed the ogre in anger, but the immobile creature then vanished.

Mirth explained that the creature was still alive, but had returned to faerie due to its near-death experience.

The Marhault can easily fit a strong, tall man like Mr. Matchstick into its hand.

The Marhault never spoke, and apparently cannot. It attacked and behaved much like an animal – but not a stupid one.

As noted there has to be a way to tell it whom the target is. The main 3 hypotheses are :

The ogre could easily be summoned into these universe to provide some muscle. In the Marvel Universe, Morgan le Fay could almost certainly summon several such specimen.

In the DCU… mmm, not sure. How about Morgaine Le Fey ? :-). The orange-armoured version, who clashed with the Demon (Jason Blood) pre-Crisis and returned in a new version in Demon Knights in 2011.

Source of Character: Mage: the Hero Discovered by Matt Wagner. 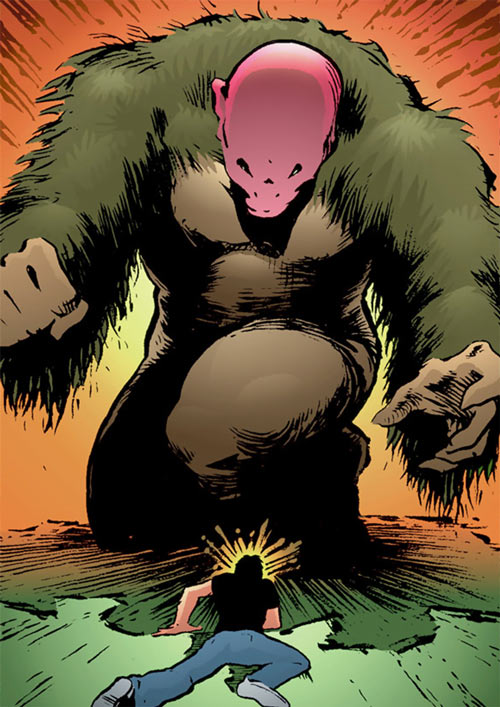