This specific character was from a RPG campaign of mine about a very special police unit of the Lone Star corporation, called Discipline Seven. She received a writeups.org profile as a consequence of insomnia.

Marian is a quivering physical and emotional wreck. However, she also has cybertelepathic abilities.

While it is unclear when she experienced the Deep Resonance , she can enter the cyberspace with just her brain, and perform at least as well as a well-equipped decker . She compiles programs, routines and autonomous agents (called complex forms in otaku  jargon, though Marian calls them dæmons) within her naked brain.

Under the Matrix persona “the Balrog”, she’s actualy a redoubtable decker and data spook.

Officer Allon’s brain seems to operate online at all times, and she frequently reacts like a search engine AI would. She’s prone to mumbling long lists of correlations about something that caught her attention in what she’s been told. This machine-like enumerations and concept associations often provide startling insight into some aspect of the situation being discussed. Her brain is the Matrix .

When panicked, she is liable to experience an extreme adrenergic reaction, displaying staggering strength. After such rare hysterical episodes, she is prone to painful fits of hysterical laughter and crying, and is best restrained and sedated.

Marian was a corp kid. Her dad and mom are big, important execs with the Shiawase megacorporation . Her dad is in Security, her elven mother in Marketing. They put an immense pressure on Marian so that she too could become a big, important exec at Shiawase.

Unfortunately, the kid was dreamy and artistic, unable to cope with what her parents demanded of her. She started experiencing nervous breakdowns before she was 10, and dropped out of the rat race.

That greatly disappointed her parents, who at that time were each faced with a career move involving extensive international mobility. They left her at a corp boarding school and moved on with their lives.

Marian hated the school, the other children, the teachers, everything. She was a vicious, unpredictably violent tyke, and hated herself for that. By age 12, she started doing drugs, and became addicted to a kind of synthetic morphine that rewrote her DNA so she would never kick the habit. Needing money for drugs, she ran away from the Shiawase enclave.

Allon became an underage prostitute within days. Her pimp, a sadistic SOB, beat her regularly, until he was shot while resisting arrest. Marian was then sent to a crisis center set within a precinct house due to the lack of funding. It was here that she saw a Lone Star recruiting poster, and applied out of desperation.

All 80lbs of her miserably failed every physical, her addiction was immediately detected, and she fell asleep during the written exam.

Welcome to the machine

Then came the computer test. Marian had always loved computers, because they did not try to beat her or abandon her. She hacked her way to the precinct mainframe during the test, and changed all her results to pass. Back then, nobody was expecting a person to hack a computer through freak magical telepathy, and she was hired.

She arrived at the police academy two days late for integration, obviously stoned out of her gourd. Allon also needed medical attention for a number of contusions, lacerations, dehydration, mild blood poisoning, etc.. The clerical staff assumed some sort of computer error.

However, Allon had intuitively programmed a complex form within the Lone Star system. It gave her a C or a Pass in every single grade no matter how often they were corrected.

Regulations required clear records to limit legal exposure before expelling someone from the Academy. But such records simply couldn’t exist in the system.

Weakest cop in the entire world

The commandant of the Academy soon realised that trying to solve the issue was like trying to staple jello to a drywall. Furthermore, within a few short months Allon would be somebody else’s problem. Marian was generally ignored and left to sleep at the back of the class.

Not wanting to have her arrested in the street while she was technically attending his Academy, the commandant let her live in one of the administrative staff’s lavatories. He then counted the days until graduation.

Allon ranked dead last of her class. She wasn’t assigned to any precinct since nobody wanted her. For six months she remained a minor but persistent embarrassment for Lone Star clerks, until somebody came up with the bright idea of using a cannon to kill a fly. They had her transferred to Discipline Seven.

The cops at Discipline Seven erroneously assumed that she had been sent there because she had some sort of special talent Lone Star did not want to lose. That mindset quickly led them to realise that Officer Allon was some sort of cybertelepath.

The precinct’s resident problem-solver, Sergeant Garcia (a former USMC Recon man with a particularly shady past) managed to establish a rapport with Officer Allon. His vast experience with illegal narcotics allowed him to understand what she needed. He procured the designer morphine she needed to live.

A regular influx of good-quality morphine let Allon function as best as she could – which isn’t saying much. One of the magicians of the precinct, Tao Jones (no relation), confirmed that she wasn’t actually brain-damaged.

As the genial Garcia continued to care for her, Officer Allon came to feel at home with the Discipline Seven freaks. She volunteered her services as a decker of sorts to help with cases.

She’s been living at D7 for eight months now. Her colleagues have come to appreciate and understand her talents. With her the cyber-resources available to D7 have surged from mediocre to exceptional.

Marian is painfully thin and pale, with long black hair and delicate half-Elven features. Her eyes have a yellowish tinge from morphine addiction. When awake, she’s always nervously playing with her hair. She always seems terribly ill-at-ease and in dull pain.

Marian is a dysfunctional mess. Due to her addiction, she sleeps about 14 hours a day. She is drowsy and incoherent for about seven hours a day – though that’s because her mind is actually in the Matrix. She thus makes sense in meatspace about three hours a day. And that’s on a good day.

Allon spends 20+ hours a day in her bed. She has an impressive collection of cute plush animals. Most D7 officers bribe her with plush animals to have her cooperate with their data collection and hacking needs. Marian loves plushies. Okay, she’s fixated on plushies.

Sgt. Garcia makes sure that she sleeps on her side so she won’t choke herself when she pukes. Her morphin-ravaged stomach often goes through painful cramps, vomiting and other harmful problems.

Garcia also occasionally cleans up her bedroom a bit, since it looks like a collection of random things slammed into a small space by a tornado. He makes sure she’s properly medicated, using oxycodone  to allow her to eat.

Even with the oxycodone, Marian is anorexic. She has to be cajoled by her colleagues into eating anything solid. She’s somewhat childish and extremely sensitive, occasionally bursting into tears for no perceptible reason.

Being so damaged and disconnected, she has severe ADD  issues. Marian has considerable trouble concentrating on anything for more than a few minutes. It is common for her to zone out in the middle of a conversation, staring into space and being miles away.

Howbeit, when she seems out of it, her mind often actually is in the Matrix. This is most discernible when Allon is talking aloud to people and programs who are in the cyberspace and not in the real world.

Officer Allon usually runs around the Matrix using a cute animal avatar based on whichever is currently her favourite plushie.

When she has to run difficult infiltration or cybercombat she switches to what she calls “the hard form”. This is a sort of indistinct, large demon shrouded in fire and darkness and wielding a pair of what looks like rusted butcher’s hooks.

This minor Matrix legend is called the Balrog by knowledgeable deckers. Nobody knows which drek-hot decker is behind the Balrog.

This Gadgetry skill works much like the Subskill described for Avi Barak on WORG, except it works in the cyberspace of the Matrix instead of the mindscape. 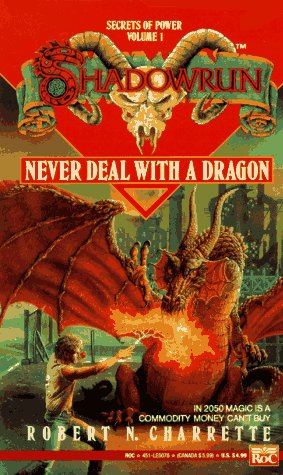