This obscure, minor villainess appeared in 1986.

She’s the successor of the first Marine Marauder. Who’s every bit as minor and obscure.

But while few people care about either Marine Marauder, they’re useful if you’re planning a maritime scenario.

It is possible that Dr. Simmonds also taught herself stuff having to do with : 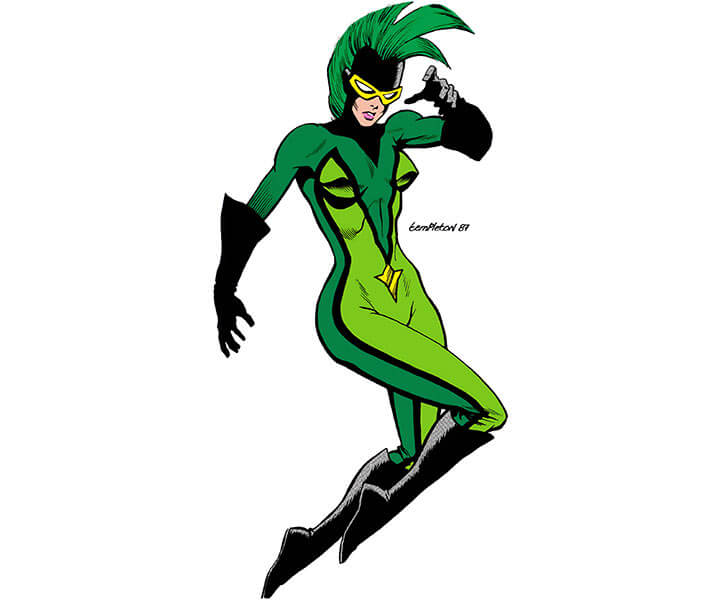 Her Marine Marauder costume seems to be a wetsuit. It may have minor protective properties.

It is equipped with goggles, and a lightweight transparent rebreather. The latter is normally stored in a sheathe within her left glove.

One suspects that it also includes some sort of last-resort, short-range weapon. Explaining how she saved herself from a rogue giant octopus.

Furthermore, the Marauder had a headquarters – a large sunken ship. An air bubble remained within, leaving the Marauder with numerous dry rooms. Presumably she had a device renewing or filtering this air.

This HQ was lost, but she could create another without too much trouble.

She also had what seemed to be crude telekinetic powers :

Her powers were developed through technology, but she seems to perform them unaided. The three main hypotheses are : 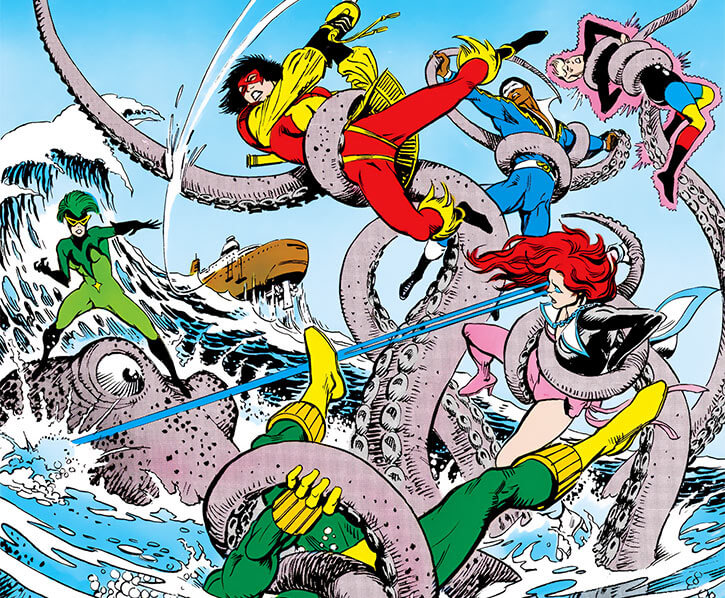 In walked a jellyfish (huah)

One trick she once used was keeping sharks near human hostages, as a sort of dead man’s switch. If she were knocked unconscious, nothing would prevent the sharks from eating the hostages.

The B-52’s references in the subheadings are from 1978. So let’s not assume that everyone recognises them…

The B-52’s usually did a sort of surreal, bazaar-like, nonsensical new wave music backed by serious talent and innovative ideas.

Oceanographer Marlene Simmonds wanted to get rich and powerful. But in a fast and exciting way.

She therefore turned to a technology allowing her to mind control sea life.

There is an implication that the original Marine Marauder was her brother. It thus seems possible that they jointly developed their technology, but both underplayed the role of their sibling.

There goes a dogfish (rea-owr)

In 1986, Dr. Simmonds was aboard a large cruise ship, the SS Ocean Breeze. Her ambitious plan was to :

While still aboard, Simmonds girl-bullied Lia Briggs – secretly Looker of the Outsiders. This seemed driven both by :

The Marine Marauder kidnapped Looker. She then confidently stopped the Ocean Breeze using a blockage of whales. However, she found herself outmuscled by the other Outsiders.

In the end, she was defeated. With her control over sea life disrupted by an electrical shock, one of her giant octopods dragged her underwater.

And so she disappeared.

There may have been further, undocumented appearances by the Marine Marauder. Since there was data about her in the JLA’s casefile, which the Outsiders presumably wouldn’t fill.

Those files mention that she’s a pirate, that she seemed erratic at best, and that her rapport with sea life had become peculiar. But all we have is the short version from the less-than-highbrow Flash (Wally West).

(The stuff about her being insane may be because she started researching magic and extinct theologies. Poor analysis may have led to the conclusion that her actions were irrational.)

Some details also imply she had her briny allies bring her treasure from selected shipwrecks.

(The Marine Marauder also appears in a 1988 DC Heroes RPG module, Operation Atlantis. She is hired to raid the Atlantean city of Poseidonis and claim to be a Soviet agent. But her real goal is to create a diversion away from her client’s operations. Said client is Serbus, a treacherous Atlantean scientist.) 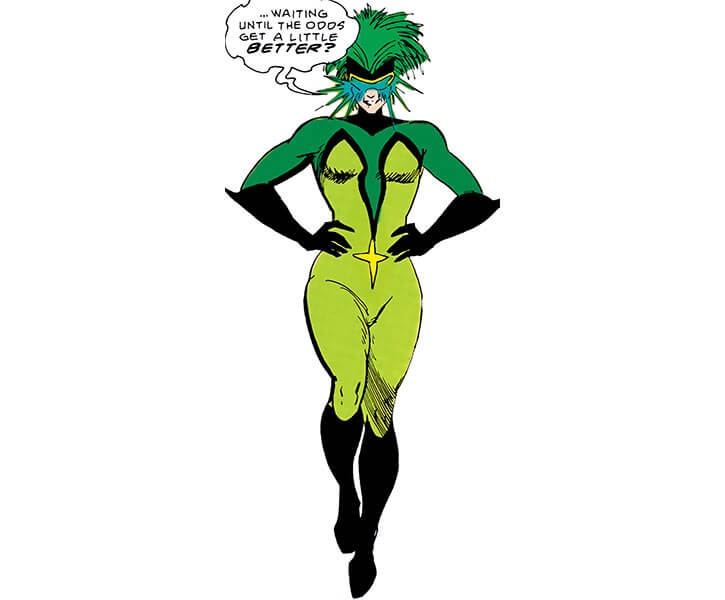 In flew a sea robin (laaaaa)

Simmonds then grew obsessed with Enlil, the vindictive storm god in Babylonian myth. She tracked down his crown, reportedly a powerful mystical artefact.

(For more about Babylonian gods in the DC Universe, see our Istar character profile).

Years of research led her to a tiny island, under which the ruins of Enlil’s palace still laid. But excavating her way into the palace was a major endeavour.

She therefore used a fleet of large cetaceans to force passing ships into reefs. She’d then enslave those aboard as her workforce.

One of her captives was no less than Aquaman (Arthur Curry). The Marine Marauder smugly assumed she was so powerful that even Aquaman was under her mental control.

The next ship that the Marine Marauder wrecked ashore counted Linda Park and the Flash (Wally West) as passengers. The latter, after being forced to cooperate using threats to hostages, greatly accelerated the excavation work.

Though the Flash kept flippantly dismissing Simmonds as a loon, she was entirely right about the crown.

However, Aquaman had never been under the Marauder’s control. Curry’s mind had actually been seized by Enlil, to hasten his return. 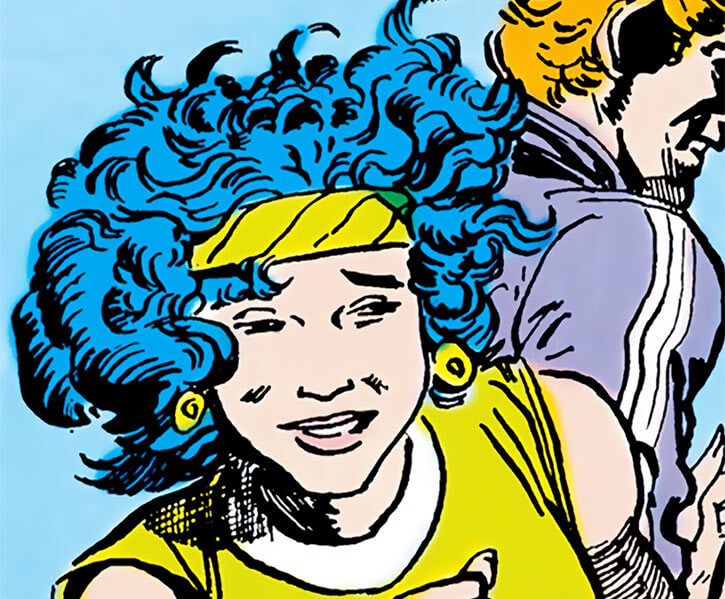 There goes a narwhal (eeeeh)

The Enlil-possessed Aquaman therefore donned the recovered crown. As the Marine Marauder had determined, the artefact held vast power over the sea. Enlil thus created a tsunami to smash the island.

The Flash managed to free Aquaman and save the captives before the wave hit. Meanwhile, the Marine Marauder went for the crown. But the tsunami crashed onto her before she could finish her incantationreciting a magic spell.

She was buried by a landslide, mere feet away from the crown.

However, it would be trivial for her to have survived. For all we know, in the next panel Topo’s evil twin digs her out from under the rocks.

Simmonds is deeply, compulsively competitive. She also has a whale-sized ego.

She’s driven to bully and overshadow any attractive woman in her vicinity, to affirm her status as the alpha female. I’d imagine that the same is true when it comes to academic prestige and funding.

Simmonds also feels entitled to, well, everything. She’s also smugly confident that she’ll always win in the end. The more things go her way, the more confident and careless she gets.

As the Marine Marauder, she didn’t seem concerned with protecting her identity. She presumably had decided to make the jump into an entirely new life, and burn all her bridges.

Dr. Simmonds seemed to have a strong sexual interest in Aquaman, in part due to his aquatic nature. But she put that aside for the time being, to focus on the Babylonian crown.

“I’m extremely competitive. I’ve been that way all my life… beauty wasn’t enough for me. I wanted wealth, but without going through the tedious world of business and investment.”

“Have you forgotten, Looker ? I’ll win. I always win.”

MIA toward Competitiveness/Jealousy, MIA toward Overconfidence, Power Loss (being Stunned by an electrical attack will Burn Out all of her Powers).

She never demonstrates strong APs of Flight. And I have to estimate that if she never used it underwater, it’s because she’s slower than a dolphin or shark steed.

For the animals, see our Animals File. Logically enough.