The first Marine Marauder is an obscure, very minor DC Comics super-villain who fought Aquaman during the late 1970s. He can command sea life.

The Marine Marauder’s power lies solely in his gadget-based ability to control sea life. Despite their Limitations, the Marauder’s Telepathic Sending Devices allow him greater control over ocean-going mammals than even the King of the Sea, Aquaman. These devices seem to be the product of the Marauder’s own scientific endeavors.

The Marauder is a perceptive and quick-witted foe who succeeds in keeping one step ahead of his Atlantean enemy during the course of their one encounter. He directs his ’troops’ from the back of a huge sperm whale.

Callous seagoing criminal the Marine Marauder was once a “lowly marine biologist” who somehow discovered the principles behind telepathic control of marine life.

Using this discovery to build his Telepathic Sending Devices, the scientist created a costumed identity and began a short-lived career as a pirate.

With a school of whales, porpoises, and dolphins under his command, the Marauder attacked and captured a freighter carrying an important medical shipment to Europe. Seeking to ransom the much needed vaccine back to its intended recipients, the Marauder secreted the ship in a secluded cove.

When a second shipment steamed for Europe with a NATO escort, the Marine Marauder gathered his forces to attack and sink the cargo ship thereby protecting the value of his own hijacked medicine.

But Aquaman and Mera, notified of the Marauder’s crime by the Sea King’s JLA teammate the Flash, arrived just as an attack squad of whales bore down on the freighter’s NATO escort vessels.

The Atlantean’s own command of sea life could not match the criminal’s, however, and while Arthur freed himself and his wife from the jaws of a mind-controlled sperm whale, the freighter was sunk.

Discovering that the Marine Marauder’s equipment interfered with the Sonar systems on the NATO escort vessels, Aquaman was able to uncover the pirate’s base of operations. The Marauder was protected by a school of telepathically controlled dolphins who battled the Sea King and alerted their villainous master of his approach.

Fearing capture, the Marine Marauder sent a whale on a collision course for the captured cargo ship knowing full well that Aquaman would try to save the vital vaccine shipment, allowing him time to escape. Aquaman strained mightily with his telepathic powers finally succeeding in overriding the Marauder’s control and saving the vaccine.

The Marine Marauder escaped capture and has not reappeared although the Ocean Master did use a Marauder robot in one of his campaigns against Aquaman.

The Marine Marauder wears a two-tone green costume; dark green on his arms, upper chest, and back and lighter green on his lower chest, abdomen, and legs. A large black “M” is emblazoned on his chest. The vertical lines of the M reach down to form stripes on either side of his legs.

His boots are black as are his cuffs. He does not wear gloves.

The Marine Marauder’s Telepathic Sending Devices are sewn into the inside of his black cowl. The cowl features a yellow rimmed visor. On his abdomen, at about the level of a belt buckle, is a dark green four-pointed star. On his back, at roughly the same level, is the star in light green.

Physically, the Marine Marauder is a fit male with an athletic build. Under his cowl, he has wavy brown hair and an attractive face.

The Marine Marauder was a cold-blooded criminal willing, for example, to allow the death of thousands to disease if his demands were not met. He seemed to have an almost foolhardy faith in his Telepathic Sending Devices and was eager to pit their Power against that of Aquaman.

When the Sea King started to win, however, he adopted a “Discretion is the better part of valor” mentality and escaped.

It is surprising that he never returned to bedevil Aquaman. Though defeated by the hero, he did not seem discouraged even when fleeing the scene.

“You’ve had it now, Aquaman ! No one interferes with my plans and lives !”

With only one pre-Crisis appearance to his credit, the Marine Marauder’s post-Crisis status is unclear. Two factors obscure his status even further.

Shortly after the Crisis, a female Marine Marauder appeared and battled the Outsiders. This Marauder, whose real identity was Marlene Simmonds, claimed to be a doctor of oceanography who invented a method of telepathically controlling all sea life.

Using some of her brother’s money to help finance her criminal career, she donned a slightly altered Marine Marauder costume and began robbing cruise ships.

The original Marine Marauder is never referred to in any of the second Marauder’s appearances although DC Who’s Who Update ’87, vol. 4 suggests that Simmonds’ brother might be the villain who fought Aquaman. If this is the case, the male Marauder may have spent his long years out of the criminal spotlight eliminating the Limitations of his Telepathic Sending Devices.

An additional problem with the Marauder’s Adventure Comics’ appearance is in its central conflict; its telepathic struggle between the villain and Aquaman. The post-Crisis Sea King did not discover his ability to directly command sea life until much more recently in his career.

Regardless of how he is written into post-Crisis DCU continuity, the Marine Marauder represents another great opportunity to place a PC group in a difficult environment; the ocean. With his ability to summon assistance from the largest living animals on the planet, the Marauder can easily keep even a large group of heroes busy.

The Marine Marauder I

Adventure Comics #449 is a classic example of a story wherein textual information is directly contradicted by visual information.

Early in the issue, the Marauder explains that he can only control seagoing mammals (as opposed to all sea life) because his “radio waves” will not travel through water. Later in the same issue, the Marauder receives a telepathic warning from a submerged dolphin guard that Aquaman is on his way.

I have attempted to reconcile this seeming inconsistency using appropriate Power Restriction Limitations.

Also, as usual, heights and weights are best guesses.

The Array also has a Feature (may work if the Marauder is unmasked), a Quirk (control must be established whilst the animal isn’t immersed) and another Quirk (sonar interference) explained in the DCH stats.

He’s a summoner, so his direct PL isn’t the most useful thing among the seven seas.

Helper(s): Dr. Sean MacDonald for comments that led to the clarification of the Marauder’s gadget’s stats. 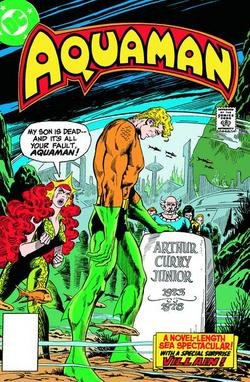 Aquaman: Death of a prince TPB 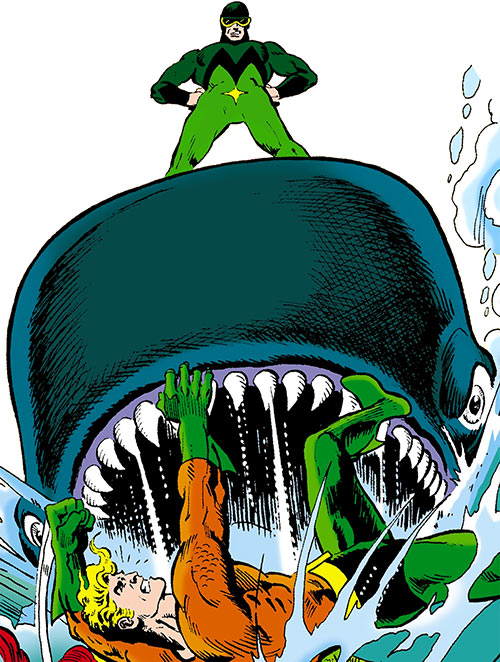 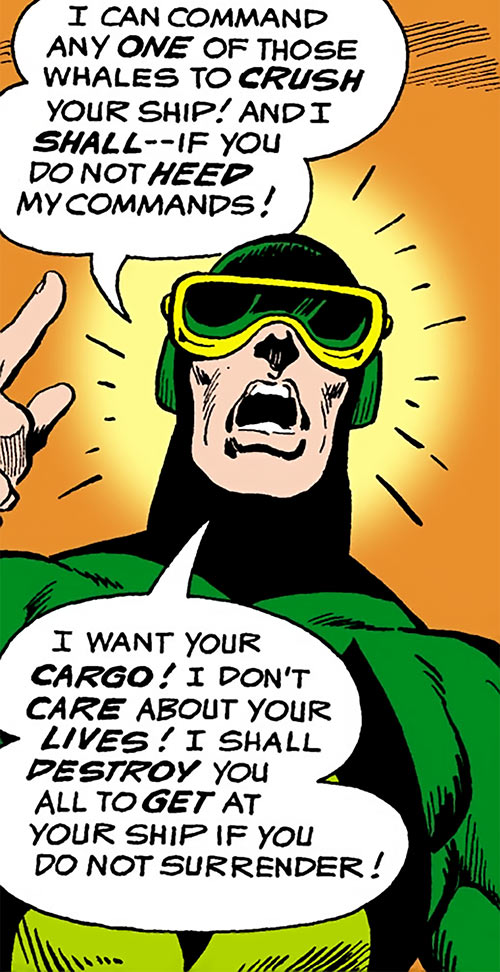