The Quake Marine is a big, beefy leatherneck with a “Never say ‘Die’ when you can scream ‘Kill! KILL!!!’” attitude. He’s one of Earth’s finest soldiers, hard-bitten, tough and heavily armed.

His coolness under fire, durability and coordination are nearly unbelievable (as will be the PTSD once the invasion’s over). The Quake Marine’s ability to not only move but also kick serious zombie/demon ass in close quarters while carrying an armory is mind boggling.

An axe to grind

It might surprise many that the shotgun- and rocket-launcher-toting marine is also carrying… a medieval battle axe. There are reasons, though.

This axe is the mythical Golden Axe used to defeat Death Adder , an extraordinarily powerful Death Knight who led Shub-Niggurath ’s forces during the incursion in the medieval era. Death Adder could only be permanently killed by an attack from the Golden Axe.

When the Dwarven warrior Gilius Thunderhead boarded Death Adder’s flying platform and slew the Death Knight with the Golden Axe, the resultant explosion vaporized both warriors, severed Shub-Niggurath’s connection to the Earth (until the Slipgate device opened our universe to him once more) and cast the axe far away.

The axe was eventually recovered by Kain Blade and Milan Flare (descendants of Sternblade and Ax Battler & Tyris Flare, all compatriots of Gilius Thunderhead) in a duel with other fighters  seeking its power. Though the charred Axe’s power was partially consumed by the destruction of Death Adder (it originally had a -3CS Bonus), it still had some benefits against the Elder Gods and was passed down through the generations in case it might be needed again. The Quake Marine used this family heirloom to finally destroy Shub-Niggurath. 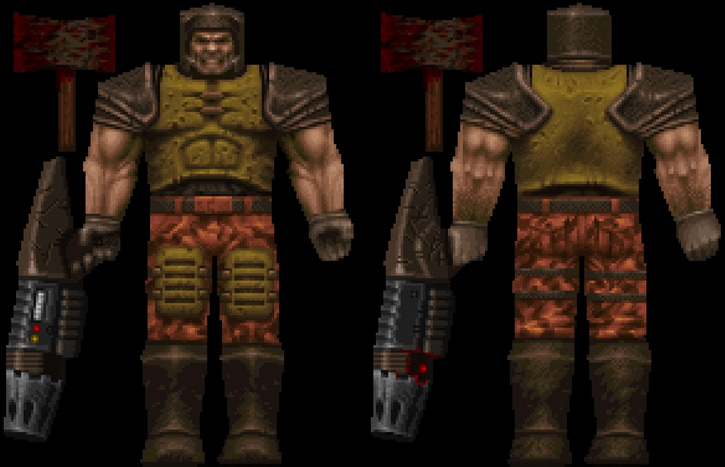 The tie between the Golden Axe games and the Quake Marine in this article is not official at all.

It’s merely a bit of fanciful speculation that arose on the list during the writeup’s creation based on the resemblance between various antagonists in both series, the roughly similar appearances of the titular weapon of the Golden Axe games and the marine’s weapon.

Another bit of speculation that the humanoid appearance of certain enemies was due to Shub-Niggurath subverting ancient humans during a previous invasion attempt as it had subverted the modern-day soldiers that entered its realm before the Quake Marine did. See the individual monster profiles for this. 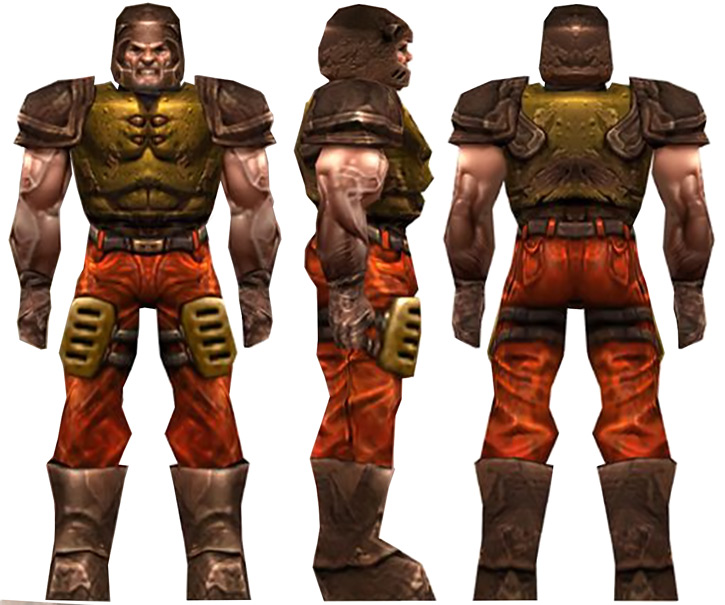 In the course of his battles, the Quake Marine acquired four mystic sigils, their purposes and origins a total mystery. Each of these Runes are made of a metallic-purple rock that is nigh-invulnerable to physical damage and are also immune to all but the most puissant of mystical attacks.

Their game stats above are mostly speculative, though the Runes are specifically noted as increasing the owner’s mystic knowledge and in the case of the Elder Magic Rune allowing the user to travel between realms. These sigils are likely to have many more as-yet unknown additional abilities.

It may well be that the mystic heritage passed down from Ax Battler allowed the Quake Marine to access some of the sigils’ abilities more easily than a normal human, and thus an even more mystically-talented individual might be able to put the sigils to even better use.

Other mystical artefacts are found (quad damage talismans, rings of shadows granting invisibility, pentagrams of protection granting invulnerability) but these relatively minor gris-gris  will burn themselves out after 30-ish seconds.

Here are the first two levels of the game. Ignore the gameplay, I hadn’t touched Quake in years.

This is using a *heavily modified* version of the game with a redone engine (namely Dark Places), so the graphics are… different from the vintage Quake, obvs.

You get the phone call at 4 a.m. By 5:30 you’re in the secret installation. The commander explains tersely, “It’s about the Slipgate device. Once we perfect these, we’ll be able to use them to transport people and cargo from one place to another instantly.

“An enemy codenamed ‘Quake’, is using his own slipgates to insert death squads inside our bases to kill, steal, and kidnap…

“The hell of it is we have no idea where he’s from. Our top scientists think Quake’s not from Earth, but another dimension. They say Quake’s preparing to unleash his real army, whatever that is. 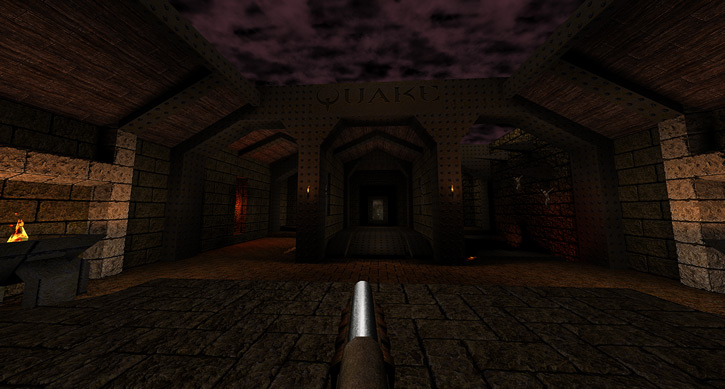 “You’re our best man. This is Operation Counterstrike and you’re in charge. Find Quake, and stop him … or it … You have full authority to requisition anything you need. If the eggheads are right, all our lives are expendable…”

You know that the heart of the installation holds a slipgate. Since Quake’s killers came through, it is still set to his dimension. You can use it to get loose in his hometown. Maybe you can get to the asshole personally. You pump a round into your shotgun, and get moving. 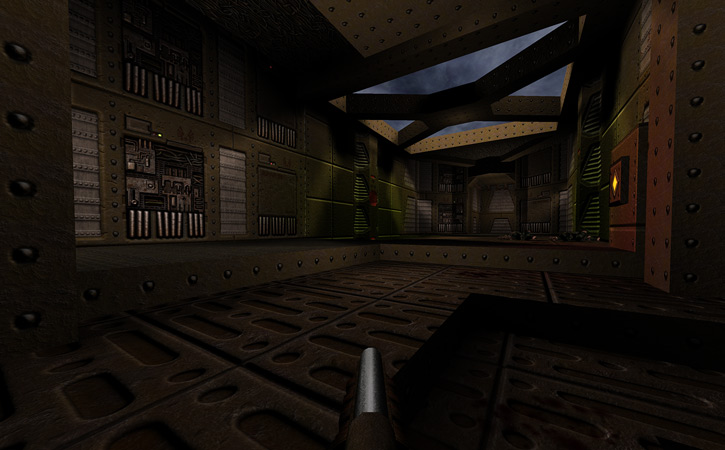 A very early level in Quake (Darkplaces remaster  with HD pack). Click for a larger version.

Using these dark sigils, he finally penetrates the fiendish God’s lair and ends the battle with a bloodbath that Quentin Tarantino would take pride in.

The Quake Marine brings the invasion to an end when he uses a teleportation device to enter Shub-Niggurath’s very body and apply the killing stroke with his battle-axe (“From Hell’s heart, I stab at thee by Pressing a Devastating Attack”).

Referring to a man who seems to be the Quake Marine, a bit of fluff text in Quake 3 later tells us that “after saving the Earth during the Slipgate Affair, Ranger embarked upon an endless travelogue of blood and destruction.

Now that he’s ended up in the Arenas, he is resigned to his future of eternal combat. He enjoys a good challenge and becomes nasty if his opponents are weak.

Our hero is a beefy, laconic fellow with full-body combat armor and a riot helmet (in an unlikely mix of urban cammo grey, brown and dull yellow), and pretty much bristling with weaponry (and ammo – lots of ammo). As required by the comic-book action genre, this description must include a note that the Quake Marine’s speed belies his bulk.

His aptitude for shooting while reloading his weapons in a heartbeat and dodging fire is quite impressive, though not quite the Kodak moment that seeing him explode out of an Elder God’s body while waving a battle-axe is.

Anybody who’d step over the slaughtered corpses of a bunch of his fellow troops and into the heart of an alien invasion from another dimension carrying nothing but an axe and a shotgun has got balls so hard they clang when he walks or not a lot going on upstairs.

Why not ? Just scale down the action a bit, and make him an ex-member of the USMC or French Foreign Legion or Royal Marine Commandos working security for S.T.A.R. Labs.

The Quake incident happens on a super-secret, oddly sinister (we all know S.T.A.R. Labs have an hidden agenda, right ?) S.T.A.R. Labs facility in a remote corner of the world, and something like the full Quake events has yet to happen, preferably involving the PCs.

The Quake marine (aka “Little O’Dare”) is the brother of the Doom marine (aka “Big O’Dare”); both are members (or descendants, depending on the period) of Opal City’s clan O’Dare. Little O’Dare was on Phobos when it disappeared, and thus encountered the interdimensional invasions hours before his big brother did.

However, the slipgates sundered the very fabric of Hypertime (thus making Phobos disappear) and the brothers ended up facing similar, yet *different* alien invasions from the same triggering events.

They are now separated and exist in 2 divergent realities. The Quake Marine may be able to exploit the magic of the runes collected during his battles with Shub-Niggurath to reunite with his sibling, having already demonstrated some proficiency at interdimensional travel.

Quake appears to have had chaotic development process, and to have broken Rule #536 of game design (“Sandy Petersen  is probably right”). The end result is not particularly coherent.

Since the background is so minimalistic — nothing is identified — a tempting explanation is that the world invaded by Quake isn’t Earth at all, though it has some human or near-human persons on it.

Rather, it is a world where it is normal for soldiers to have bright orange uniforms, a battle ax, guns that shoot nails and shotguns that look like blaster rifles (but only when seen from the outside).

Perhaps this planet is covered in giant jungles with bright yellow and orange foliage. And thick vines you need a hefty axe to hack through. The weaponry and uniform used by the Quake Marine would make (some) more sense in such an environment.

Advantages:
Familiarity (Military equipment and protocols), Iron Nerves, Lightning Reflexes (if you play properly…), Rank (Unrevealed, probably a NCO), Scholar (Packhorse — how else could he carry all that equipment and still move ?), Schtick (Fast reload).

Source of Character: Quake (PC game), the Battle-Axe’s history is from Golden Axe, GA2: The Return of Death Adder, and GA: The Duel, with some extra speculation (arcade games). 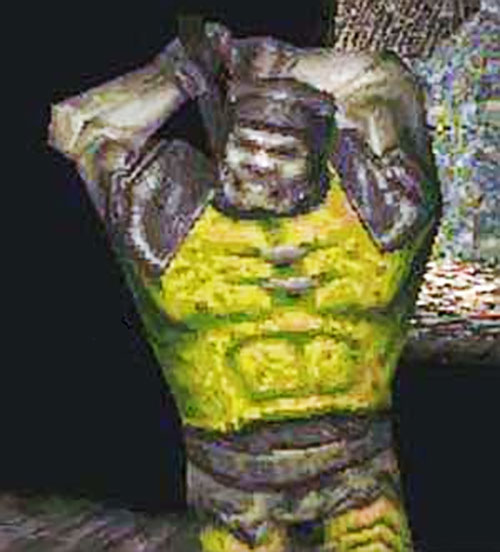 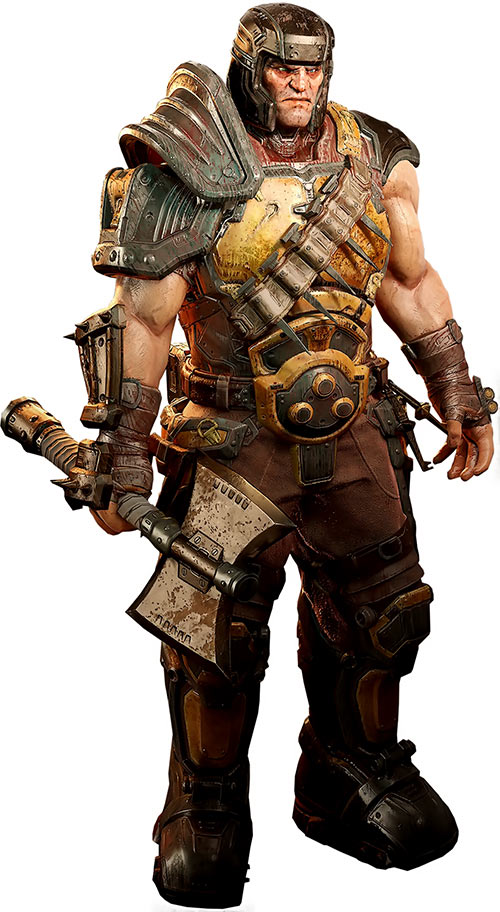 Character model by Emanuel Palalic . Click on the image for a larger version. 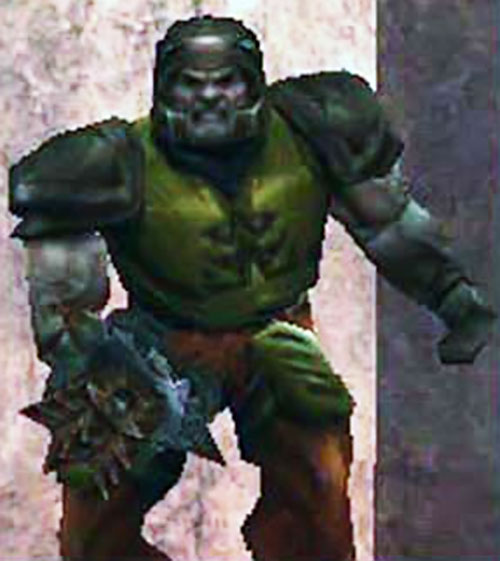