Marlene is a surprisingly adept fighter, athlete and adventurer. She is a crack shot, an excellent gymnast and can perform some mean feats of driving.

More esoteric skills include her capabilities as an hypnotist, social worker or archaeologist.

Marlene Alraune is the daughter of Dr. Peter Alraune, Sr., a noted archaeologist. Marlene studied art history in college. At an early age she married Eric Jules Fontaine, but their marriage lasted only a brief time for unclear reasons.

Dr. Peter Alraune Sr. spent five years searching for ancient Egyptian archaeologist artefacts. He worked in Sudan, just south of the present day Egyptian border. Marlene joined him in his work in the Sudan – though she may not have been there for the entire five years. Near the town of Selima, Dr. Alraune discovered the tomb of the (fictional) Pharaoh Seti III.

(I’d assume that it’s fictional burg near the Selima Oasis .)

The mercenary and terrorist Roald Bushman learned about Dr. Alraune’s discovery. Thus, he planned to attack Selima to steal whatever treasures the archaeologist had found. Bushman was nearby – he was leading mercenaries against rebel forces in Northern Sudan.

One of those mercenaries, Marc Spector, appalled by Bushman’s atrocities in battle, decided to leave his employ ASAP.

During Bushman’s raid on Selima, Dr. Alraune, rightly fearing the Bushman would steal and melt down their artefacts for their gold, attempted to kill him. Spector stopped Dr. Alraune, but was then sickened when Bushman savagely murdered the archaeologist.

Spector found Marlene Alraune and told her to get to safety. Marlene left, thinking Spector was the one who killed her father. Later, Spector angrily protested when Bushman had innocent civilians in Selima slaughtered. Bushman knocked Spector out and had him left in the desert to die.

Regaining consciousness, Spector wandered through the desert. By seeming chance, approaching Pharaoh Seti III’s tomb. There Spector was found, on the brink of death, by some of Dr. Arlaune’s workers. They brought him inside the tomb. Spector was suffering from such great heat exhaustion that his heart stopped. One of the workers pronounced him dead.

Marlene, who was supervising the packing of the discovered artifacts before Bushman could find them, was saddened by Spector’s apparent death. She had deducted that he did save her life. While she watched over him, Spector revived.

He attributed his seeming resurrection to the Egyptian moon god Khonshu, whose statue stood nearby. Spector draped himself in a cloak he took from the statue. He declared himself the moon’s knight of vengeance, as you do. In this new guise Spector defeated Bushman’s forces.

Marlene began to fall in love with Spector, and they both returned to America. There Spector became the masked crimefighter known as Moon Knight. As Spector’s confidante, Marlene encouraged his development of the Moon Knight identity as a force for justice.

He also adopted another identity, that of Steven Grant. Through wise investments, Grant rapidly became a millionaire. Grant and Marlene took up residence in a mansion in Long Island, New York. She was both his lover and personal secretary. Yet she also took a quite active role in many crimefighting mission, sometimes as an undercover agent.

Receiving additional training from Spector’s close friend Jean-Paul “Frenchie” Duchamp and Spector himself, she proved herself quite able to act as a resourceful sidekick. She was severely injured on one of these missions but underwent a complete recovery.

Marlene preferred Spector’s more refined “Steven Grant” persona to the others he used? Furthermore, she was increasingly distressed by his growing psychological unbalance brought about by use of multiple identities.

However, upon having a vision of Khonshu, Spector felt himself compelled to return to the Sudan. Unwilling to see him return to his life of violence and multiple personalities, Marlene told Spector that she would leave him if he went to the Sudan. He went there nevertheless, and Marlene moved out of the Long Island mansion.

She found herself unable to actually dump him, however, and even ended up participating in several Moon Knight missions.

She enrolled in a school for social work, and soon became a social worker at the Seaview Research Hospital. Eventually, she went back to her husband, Eric Jules Fontaine, who was now crippled. But through circumstances not yet revealed, she left him again to return to Spector.

Marlene is weird. On one hand she is a tough and resourceful woman with élan and nerves of steel, able to, say, operate in a God-forsaken Central American hellhole along with an ex-Foreign legion merc to engineer and conduct a commando action to free a friend. On the other she has a relationship with Spector.

Alraune and Spector are almost pathetically co-dependent. They can’t live without each other, but their relationship just can’t really work for long due to Spector’s immaturity and mystical visions/delusions and Alraune’s needy possessiveness, which translates as an aggressive jealousy.

Marlene : “Why do I always end up coming back to him ?”
Frenchie : “Because he needs you.”

Marlene : “That’s a blonde hair on your shoulder”
Spector : “So what ? You’re a blonde, Marlene.”
Marlene : “Not a cheap platinum blonde, Marc !!”

Marlene is now one of the owners of Spectorcorps. She has a High Connection to Spectorcorps, and her Wealth is 010. 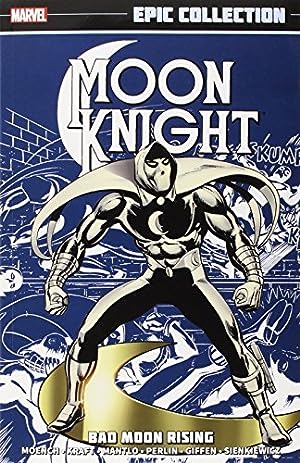 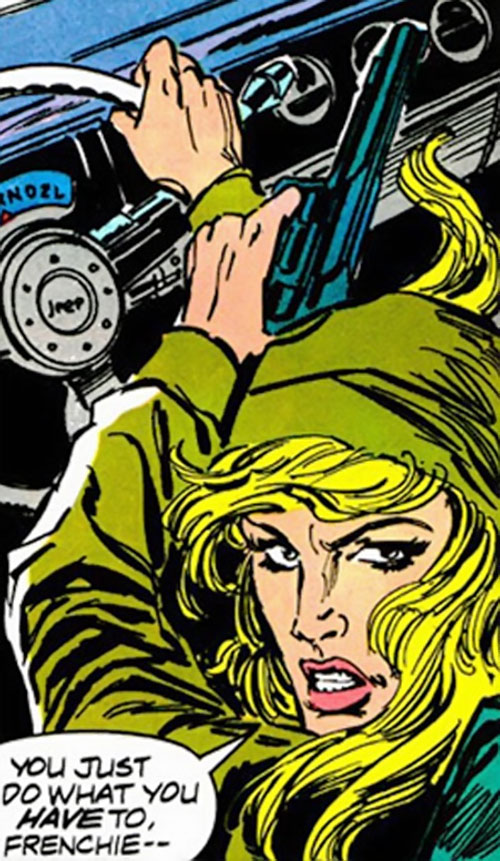 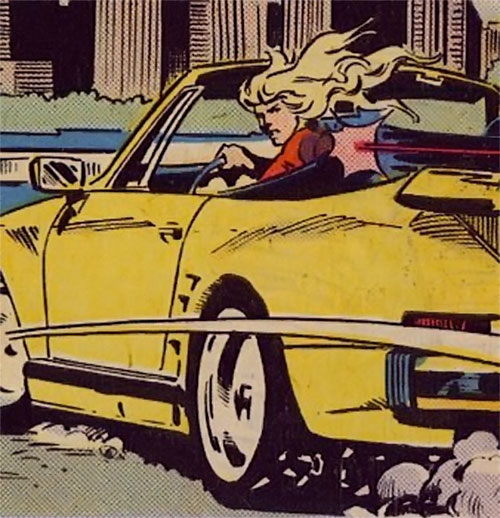