Marrow has the ability to grow bone extensions from her body at an incredible rate, to use for defensive or offensive purposes (in DC Heroes terms Claws, Projectile Weapons).

Initially she would simply pull the bones from her body as they grew to use as knives, etc., but eventually began to be able to exert some control over what type of growths occurred.

Her bone growths are denser than normal bone, able to parry and cut steel weapons with ease.

Marrow also seems to have redundant body systems, so fatal-looking wounds may not actually kill her. She is decidedly hard to hurt, and can take massive damage before succumbing to wounds (in DC Heroes terms Damage Capacity, Stabilization).

She survived having her heart ripped out by Storm by dint of simply having a second heart. It is not known whether she can regrow the lost tissue. It would certainly be possible considering she doesn’t bled when she pulls the bone spurs free from her body.

Marrow’s history comes in three stages ; most of it retroactively.

First, she was a survivor of the Mutant Massacre . She was borne to safety by Gambit after he realized what he had done in guiding the Marauders into the Morlock tunnels. She and the other survivors were spirited away to another dimension  by Mikhail Rasputin.

It was dimension of almost constant danger, where Marrow and many other young Morlocks, the “Second generation”, grew to young adulthood.

Second, Marrow and several of her peers of this new generation returned to Earth several years later. They reclaimed the tunnels and planned to exact revenge on the X-Men, whom they blamed for their exile. Only a year or so had passed on Earth due to the differing time rates.

Marrow and her allies kidnapped a subway full of passengers to use as hostages against the X-Men. Their goal was to force Storm into combat with Marrow, to take back the leadership of the Morlocks. Storm had previously gained it in combat from Callisto, their former leader.

Storm met Marrow in combat and ripped out her heart. Marrow was presumed dead, though it was later revealed that she’d survived because she had redundant body systems, including a second heart.

Marrow later reappeared to assist Bobby Drake and Dr. Celia Reyes against the Operation Zero Tolerance Sentinels. The details for this are unknown to me. Bobby returned with Marrow and Reyes to the X-Mansion, and Marrow remained with the team there, in spite of the friction her presence caused among the team, old and new.

Marrow claimed the now-vacant Danger Room as her private space. She bitterly resented it when she was evicted to make room for the new construction. She and Wolverine clashed over her attitude, and in the ensuing combat, Marrow critically wounded Wolverine by slashing his throat.

Marrow continued to be an abrasive presence on the team. Yet she also proved herself in battle and during the “Hunt for Xavier” storyline. Her powers began to advance to the point where she had direct control over her bony structures, and could fire razor-sharp slivers of bone in a fine spray from her forearms.

She dropped from public view, however, when Chris Claremont took over the title once more, advancing the story six months.

Marrow is Wolverine without constraint and discipline. She is mean, nasty, thoroughly without scruples, and she hates “upworlders” with a passion. She is hostile, rude, impolite, has no table manners, and fights at the drop of a hat, usually to the death. She especially had no respect for Charles Xavier. 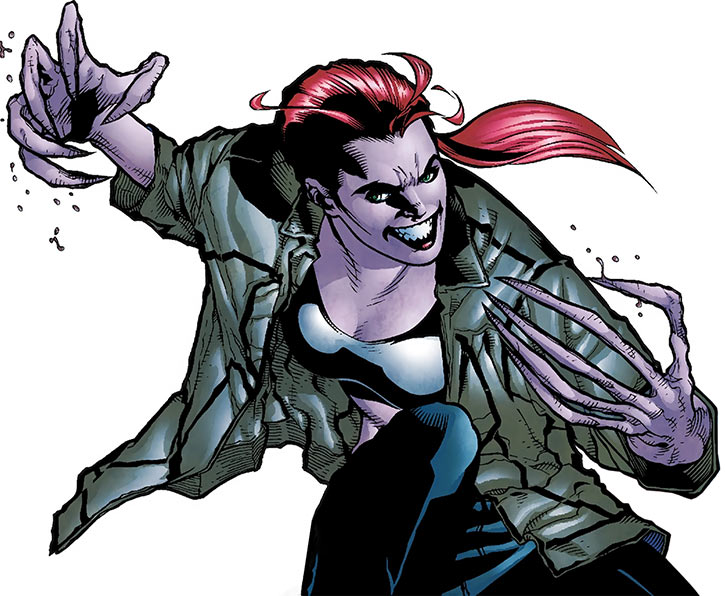 I really liked her that way.

She was the type of mutant that Xavier’s was established to help, but never got around to. She reminded everyone just how hypocritical they were, and made them uncomfortable. She was especially a reminder to Storm of the responsibility to the Morlocks that she shirked for years. I suppose that’s why they dropped her.

Marrow typically fights to kill, and unless she has reason to do otherwise, she should be considered to be in Killing Combat at all times.

[To Wolverine, whom she’s just stabbed through the throat] “Lesson’s over, old man. You can scream now… Well, You can try, anyway.”

Marrow is a wicked fighting machine with a tendency to kill people that tick her off. I have always seen the Morlocks as the perfect foil for a Gotham City adventure, with the Batman shocked to see what kind of existence goes on under the streets of his city, right under his nose, with him unable to do anything about it.

Bonuses and Limitations:
Claws and Projectile weapons can be used to create melee and thrown weapons and give them to allies.

Given the amount of clarifying discussion, I have raised Int, dropped Sharp Eye, Added Projectile Weapons: No Range and Damage Capacity, upped her age based on a quote I discovered in Generation X (the first appearance of Gene Nation); Marrow must be in her 20s.

Her Int presents a problem ; neither Storm nor Wolverine “Intimidate” her in the classic manner, though I recall she fears Storm (or at least respects her prowess enough not to challenge her again). Wolverine has Charisma (Intimidate) 10, and Storm has Charisma 09.

IMO though Marrow is quite resistant to the Intimidation she is not *that* resistant, so I am going with 07 Int/Will w/ no Sharp Eye.

Previous to her joining the X-Men, Marrow has a DEX 06, with relevant drops in Skill levels (unlinked Weaponry is 6).

After Xavier returns, Marrow gains a lot more control over her abilities, and gains the ability to fire razor-sharp bone slivers in a fine spray from her arms (Projectile Weapons: 06, loses the No Range Limit), and loses her Distinct Appearance, since she can retract the bone projections under her skin. She loses her MPR (Pain) and her Serious Rage. 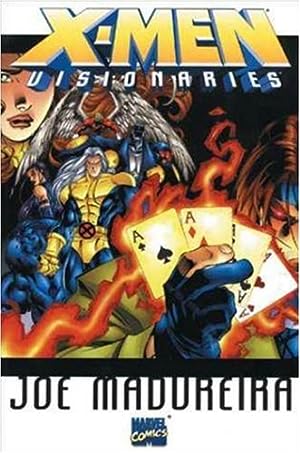 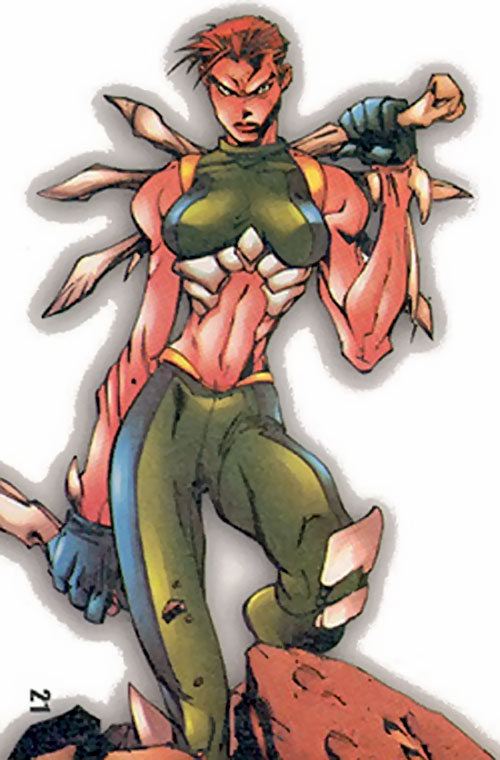 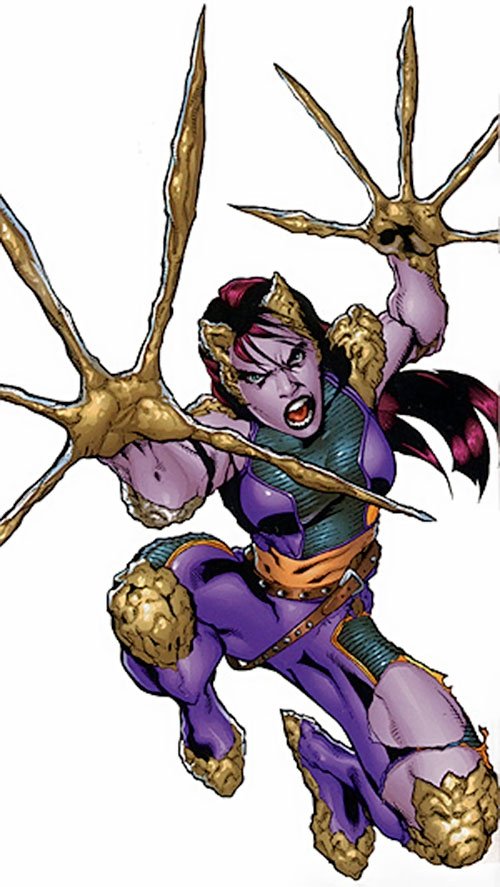 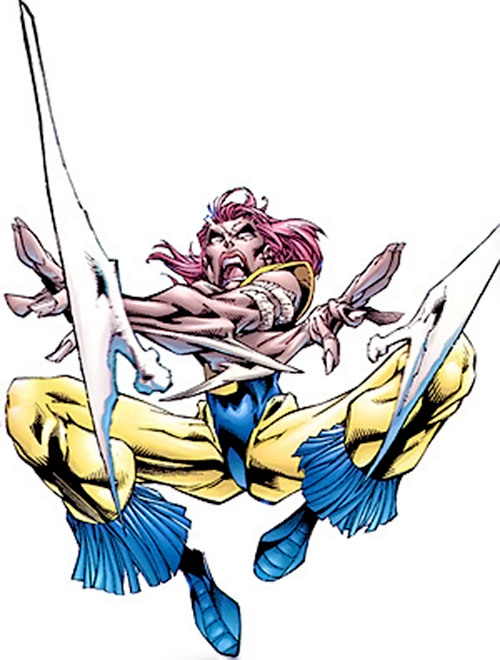