Marshall is a genius with knowledge of a variety of scientific disciplines. However his job mainly involves the production of discrete technology for espionage purposes, and the use of his computing skills. He is especially skilled at the miniaturization of technology to allow it to be more easily concealed.

He also has a photographic memory.

Marshall was recruited into SD-6. He believed, as did most of its personnel, that it was a black ops division of the CIA. He became head of the tech ops department.

He usually worked only in SD-6 headquarters. But on one occasion he had to accompany field agent Sydney Bristow on a field assignment, since his skills were required on site. Despite his nervousness, especially at flying (he lined his jacket with a parachute for two, just in case), the mission was successful.

However, on his way home from the airport, he was kidnapped. His abductors tortured him to get him to access the stolen data, which now was on a secure server. Unable to access it, Marshall offered to rewrite it using his photographic memory.

While working on the code, he managed to covertly send out a message. That was done under cover of downloading music to listen to while he worked. Eventually running out of time, he revealed his work to his captors, a video game. Angered, they were about to kill him.

This is when Sydney arrived to save him. She killed the immediate threat, but they were trapped in the skyscraper. However, Marshall still had the parachute in his jacket, which let them escape.

When SD-6 was brought down, Marshall adjusted easily into working for the CIA. When their unit had to work with the NSA, Marshall met NSA technician Carrie Bowman. They started a relationship. By the time Sydney was revealed to be alive, a couple of years later, Carrie was pregnant with their first child.

Carrie went into labour in the middle of a mission. Marshall was talking Sydney through over the radio, but Carrie refused to go to the hospital until they were married. Marshall hurriedly had Weiss, the only available team member, registered on the “Internet Church of Mammals” as an Exalted Minister. This allowed him to “officially” marry them.

When traitor Lauren Reed sabotaged the operations centre disguised as Sydney, she shot Marshall when he got in her way. He recovered from the wounds a few months later. But by this time most of the other members of the team he was closest to had apparently left the CIA. That left him feeling lost.

He soon learned that they had actually been moved to a black ops unit, Authorized Personnel Only (APO), based on SD-6. Furthermore, they his expertise. Thus, he was inducted into the unit. He pretended to leave the CIA as well, as he was not allowed to tell his wife about his new job.

When late for work one day, Flinkman found himself locked out. A biological agent’s release had left the APO offices locked down. Meanwhile Sydney had been buried alive in a coffin in Cuba. Nobody else was available to save her. Marshall managed to reach her just as her oxygen supply ran out.

With nobody else available, and their enemies knowing what Sydney looked like, Marshall had to go undercover into their Berlin nightclub. He managed to get through mostly okay, until he accidentally shot the head bad guy with a covert gun. Needing him to help circumvent an ocular scan, Marshall was forced to dig his eye out with a spork.

When Rachel Gibson was recruited to APO, Marshall developed a friendly rivalry with her. The pair were abducted by Sloane, to help him. They resisted until Sydney urged them to cooperate. Yet Marshall managed to pass a message to her that she got Carrie to interpret for her. This allowed APO to raid the place Marshall and Rachel were being held, just in time to avoid them being executed.

He continued his job. Several years later, he and Carrie are expecting their fourth child, all boys.

Friendly and open, Marshall can be awkward in social situations, especially when talking about non-technical subjects. He is more comfortable working in his offices, getting nervous when out in the field.

He tends to overcompensate for his social awkwardness by babbling, often going off at tangents. This is especially true in meetings, where he tries to inject an uncomfortable casualness. He usually tries to make friends with work colleagues, not necessarily picking up on their lack of interest.

Marshall: “Hush… hush… hush little Mitchell, don’t you cry. Daddy’s here to teach you about lanthanides . Cerium is first, yes it leads the way. Hexagonal structure and it’s iron grey. Praseodymium is next and it looks like brass…”

[Marshall has to infiltrate a German nightclub. He is communicating with Sydney with an earpiece]
Marshall: “Okay, I’m in. Now what do I do ?”
Sydney: “What do you see ?”
Marshall: “Well, a lot of people who are into spanking, apparently.”

[A random woman grabs him and kisses him] “Oh my god, I think I just got hepatitis.”

Bonuses and Limitations:
Recall is a Skilled Power (-1).

Equipment:
He often has some piece of technology on him at any time [8AP C Omni-Gadget].

As an agent of the CIA, Marshall has access to their resources when on missions. Sometimes his job requires that he kill those who present a threat to his country, and the CIA provide a measure of protection from legal repercussions (and loss of HP awards), so he has the ’Licence to Kill‘ Advantage (found in the literary James Bond character profile on WORG). 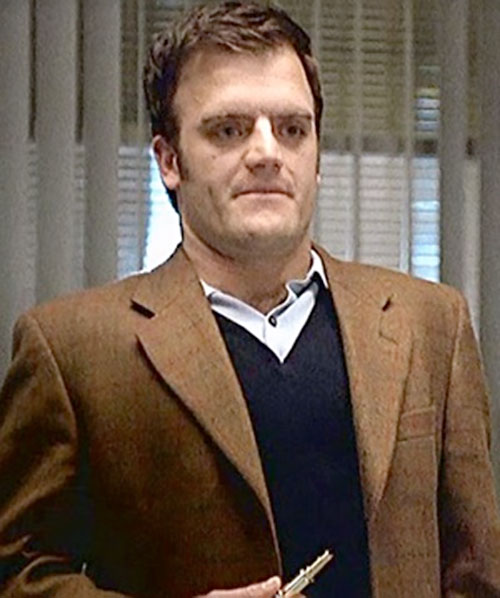