J’onn J’ozz was a Martian, living on Mars if you can imagine that. He was drawn through time and space by Dr. Erdel. He was treated kindly by the doctor and so when he apparently died, J’onn attempted to fit in and live up to the kindness Erdel had shown him.

He became a police detective under the name of John Jones. He was fairly famous for his deduction and the results he got, hunting down criminals of all sorts. When the next heroic age came along, he showed people his mostly human but still alien form and helped 4 other heroes stop an alien invasion. These people became the first Justice League of America.

J’onn has always been a member of the Justice League. There wasn’t a time when there was a league of some sort and he wasn’t there as a member, or advisor. During the Justice League International days, he was shocked into remembering the reality of his life on Mars.

He also discovered that Dr. Erdel was still alive, and had constructed the fabrication of his life that J’onn had remembered before that time.

After that he recovered from his crippling fear of fire which was caused by having to give his wife to the flames during a funeral following a plague on Mars. He began searching for any other members of his race.

J’onn later took up the mantle of teaching young heroes how to work together and use their powers effectively and responsibility. He has worked with Gypsy, Triumph, Mys-tek, the second Ray, and Damage. Later, he went deep into space in search of a widely travelled intergalactic monk who might have come across his people elsewhere in the universe. 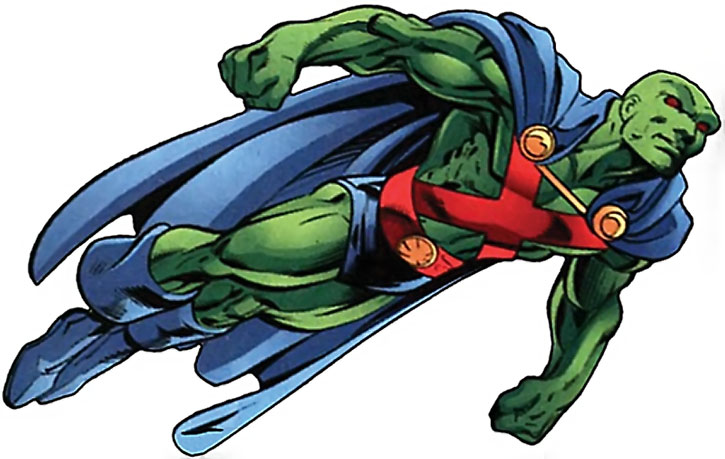 J’onn is obviously well travelled throughout the universe. He is somehow is capable of traversing vast distances without apparent outside aid (or maybe he’s just got an invisible spacecraft), because he has taken over the title of ’Most at Home in Space Justice Leaguer‘ from Hal Jordan.

There are people he runs into who he knows, places he has been and cultures he has experienced that others know nothing about.

As of this writing, the Manhunter is a member of Justice League America and appears monthly in JLA.

Note: This is the history of the very beginning and the Martian Manhunter miniseries, and leaves out the things you could currently find on a comic shelf or back issue bin that’s rather generic.

The Martian Manhunter is a green humanoid with a protruding brow that makes him look somewhat grim. He looks to have no hair on his body, and has a developed musculature. He wears blue trunks, blue boots, and red straps that criss-cross his chest and merge into his belt, which has a circular design on the buckle. A blue cloak is slung around his shoulders.

As John Jones or any other identity he assumes, he can look like any human you have or haven’t seen before. John Jones in particular is about the same build as the Manhunter, with brown hair, and blue eyes.

J’onn is a serious being, often having his actions dictated by logic and the desire to see justice done. He can be stern, and even seem irrational, but he is nearly always in control of his emotions and acting according to some plan. He does have a sense of humor, but it doesn’t manifest very often, especially not where his students are concerned. 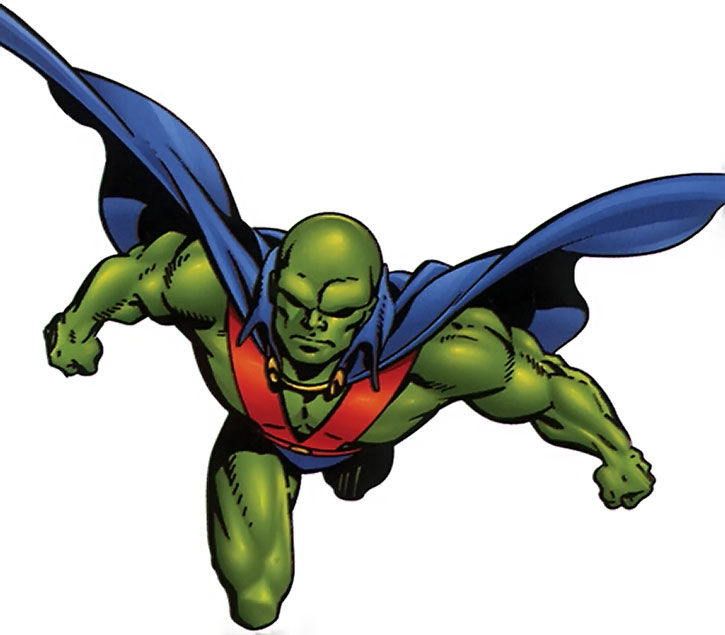 He takes teaching the younger generation very seriously. He is also extremely interested in the affairs of aliens on Earth, it’s almost an obsession but he only really exercises it when he senses injustice.

“Do you see what a man is capable of when he has his milk and cookies every day ?”

“I like Oreos. Captain Marvel introduced them to me.”

Drawbacks:
MIF (Flames), SIA (Mysterious Situations) [Note: Earlier in his career the fear of flames should be represented by Traumatic Flashbacks triggered by flames as well as the irrational fear. He also had a -3 CS Attack Vulnerability to Fire and Flames. During the 50’s, he had the Mistrust drawback.]

Self-Manipulation, Energy Blast, Dispersal, Enhanced Senses, Sealed Systems, Density Increase, Growth and Mind Blast all have a serious burnout due to his writers not remembering he has the abilities.

J’onn’s Dispersal applies its APs normally to his defenses against physical and energy attacks but he ignores force fields entirely.

J’onn often uses his Self Manipulation extend his limbs to long lengths (by giving himself Stretching of usually 3 APs), but he can become a living sculpture unique to Martian culture if he desires to.

At the end of the Martian Manhunter mini-series he used his shape changing abilities to form an undulating mass of constantly changing shape and size as he ’danced‘ in joy at regaining what he had lost.

He also can gain abilities that are physically a part of the body he is mimicking, such as gills, wings, claws etc, but abilities created by a metagene or magic he cannot produce. Also, I theorize he can’t produce effects that are properties of the body but are dependent upon glands, or other biological properties those bodies have that his does not. 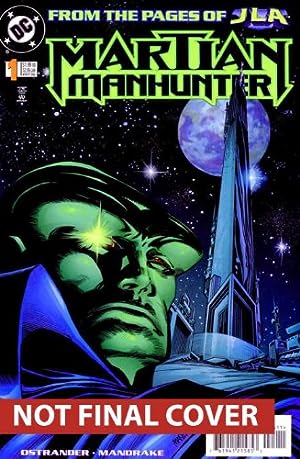 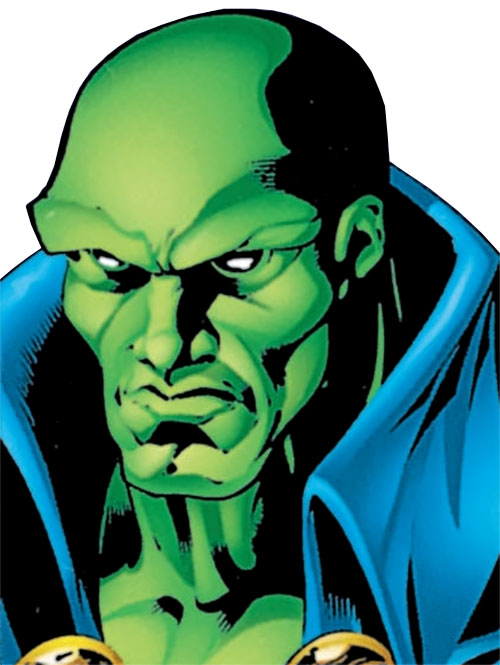 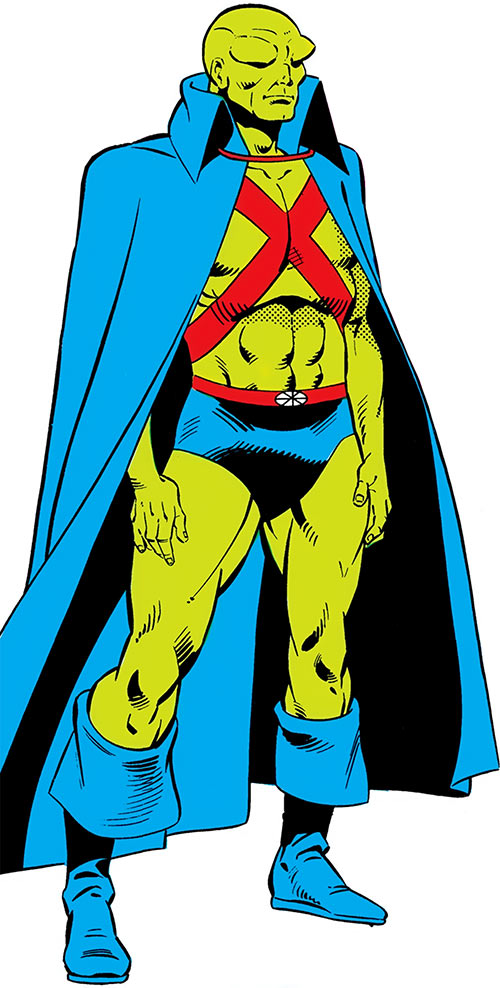 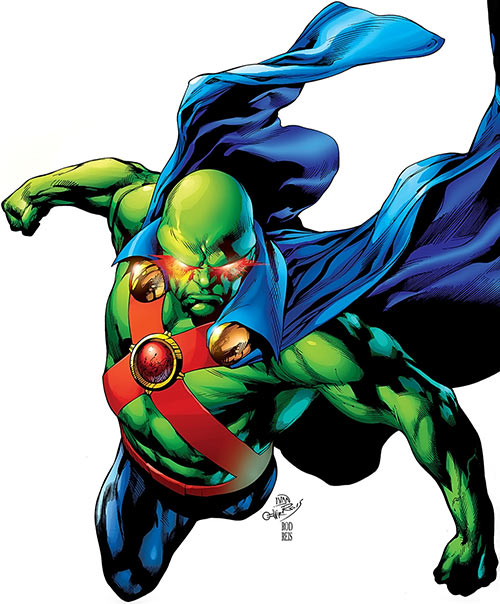 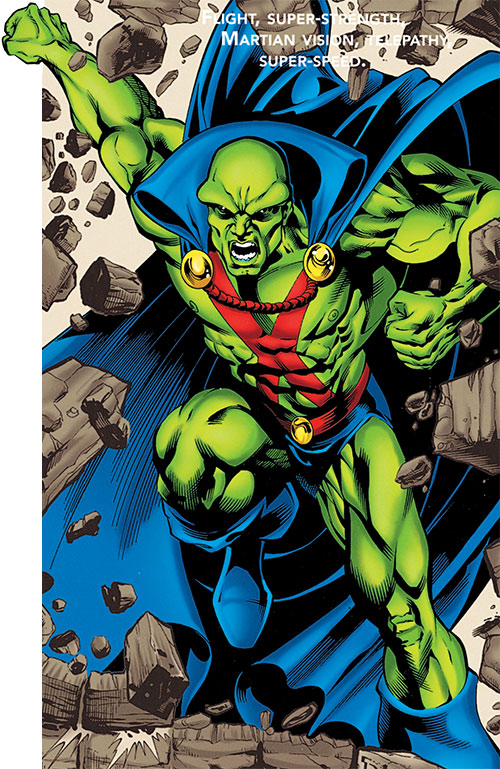