Like all Pluvians, Martinex’s body is composed of extremely complex silicon-isotope organic compounds. These help protect from extremes of temperature. This also makes gives him greater mass and strength than normal humans, allowing him to lift around a ton, and removes his need to breathe. The crystalline form also affords him a level of protection from light based attacks.

Martinex was a scientist before the invasion, and is also a fairly good engineer.

The outer layers of the crystalline “skin” on his hands contain two artificial, complex impurities. These cause a solid-state lasing action. In other words, they convert sources of bodily energy into beams of energy at two principle frequencies.

The maximum distance at which he can employ these powers is about 28 feet.

His expertise with these powers allows him to create solid constructs of ice or flame. However, the flame ones only retain their stability while he concentrates on them.

(See the Guardians of the Galaxy (31st century) profile for a complete history of the team.)

By the 31st Century, Earth had set up colonies on most neighbouring planets. On Pluto, the inhabitants developed crystalline shells around their bodies to protect them from the extreme temperature.

Born in 2986, Martinex was working in a laboratory on Pluto’s moon. An accident left him unconscious in the rubble. This is how he survived the Badoon invasion which wiped out the rest of his people.

Evading the Badoon, Martinex met up with the survivor of the Jovian colony, Charlie-27. They destroyed Pluto’s industrial complexes then took teleport tubes to Earth. There they met up with Vance Astro and Yondu, and formed the Guardians of the Galaxy. The Guardians fought against the occupying Badoon, with Martinex as their leader. 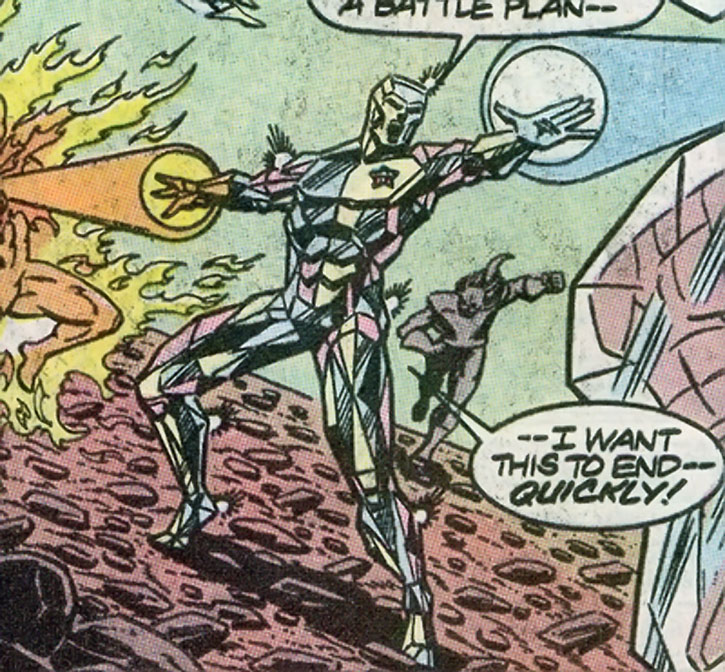 When the team faced Force in the search for Captain America‘s shield, Martinex faced their old enemy, Brahl. Brahl badly damaged him, cracking shards off his crystal form. Martinex was stabilised by quick attention from the others. Starhawk used his powers to help him recover, his body changing to have a less faceted look as a result. Starhawk then confided in Martinex the secret of how he knew what would happen.

When most of the Guardians elected to stay on Earth and help rebuild, Martinex decided not to join them. He felt that the Guardians were limiting themselves in the good they could do in the wider universe. Thus, he left with his team mates blessings to form a group with a wider agenda. Travelling to Main Frame’s world, he convinced Main Frame to help him establish the group.

When Main Frame was infected by a computer virus while in the middle of investigating a power drain, it resulted in worldwide disasters. Martinex sent a distress call to the Guardians and their allies. The Guardians were in another time when the call went out, but it was answered by Replica, Firelord, the Spirit of Vengeance, and Hollywood.

Together they protected the populace. Then they discovered that the power drain was due to the Intimidators (formerly known as the Minions of Menace), who were attempting to revive Korvac. They were too late to stop them, but Main Frame loosed Phoenix from suspended animation, and he destroyed the newly awakened Korvac.

Martinex convinced the others to join him in forming the beginnings of the Galactic Guardians.

The team helped the Guardians of the Galaxy against Bubonicus and Dormammu. After Bubonicus easily defeated their most powerful members, Martinex and Replica tricked him by having Replica take Martinex’s form. When Bubonicus attacked her with a virus targeted at Martinex’s genetic structure, it failed and they managed to take him by surprise.

The recovered Phoenix then helped Eternity by cleansing it of the infection. The captive Bubonicus disappeared during the cleansing. 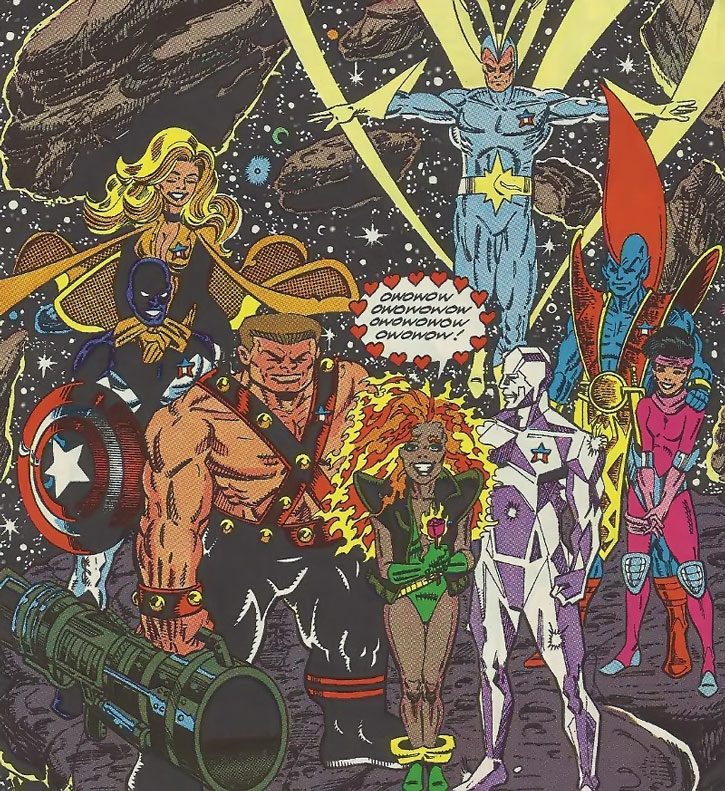 They barely arrived in time to teleport the team off Drydock when Dormammu destroyed it. With the aid of the Ancient One, they beat Dormammu.

Mainframe then revealed that centuries of studies had shown him how the timeline could be altered to prevent the invasions of Earth. Martinex gathered the currently sabbatical Guardians of the Galaxy, and Hollywood. He put forward Mainframe’s plan.

They succeeded in the past, but were shanghaied on their way back to the future. So what changes may have resulted from their actions are unknown.

Calm and analytical, Martinex tends to look at the big picture more than his team mates. He is less prone to impulsive action, but is still a relatively efficient combatant. However, he’ll happily defer to Charlie’s tactical leadership in such situations.

He’s never really been comfortable in a leadership role. But he has accepted the burden, even though he tends to worry a lot over his decisions. He’d became more comfortable with it by the time he left the Guardians.

He left because he had a vision of what the group could become, but knew the current members were currently too interested in smaller scale problems.

The Badoon invasion occurs a century earlier. When the Guardians leave Earth, after finally driving the Badoon away, they rename themselves the Wanderers. Their travels are delayed when they stumble into a time warp, emerging almost a century later, where they encounter the Legion.

Having no real links to their previous time-period, they don’t bother using their craft’s time travel technology to return there.

The colonies that some of the Guardians belonged to can stay as historical factors. But these were mostly forgotten in the reconstruction years that followed the Badoon’s expulsion. Any other stuff that would have been on those planets at those times survived the Badoon occupation. 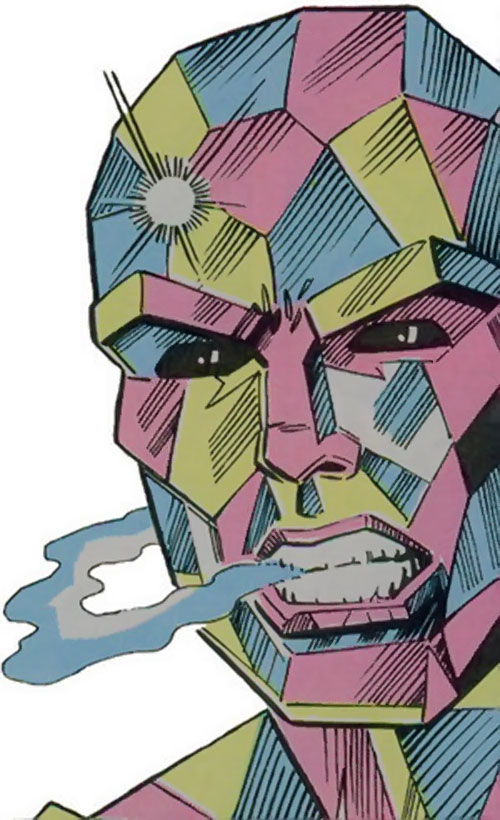 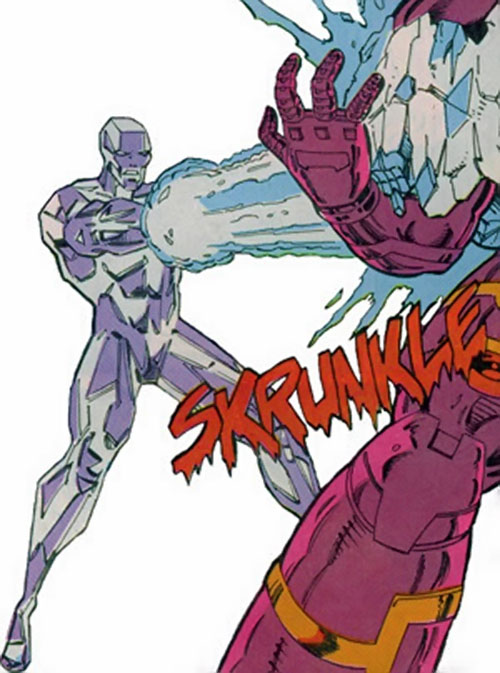