Marvin was able to read the Ultimate Question in Arthur Dent’s brainwave patterns. But this was of course the wrong question, since Arthur turned out to be descended from Golgafrichams instead of being part of the computer program for which the Earth was built.

Recall is based on the fact that Marvin has a “brain the size of a planet”. It is, no doubt, kept in a pocket dimension , much like the planet factory in the bowels of the planet Magrathea.

Self Link Gadgetry indicates that Marvin is, in DC Heroes RPG terms, a Gadget. Thus, he has all the advantages (doesn’t breathe, doesn’t eat) and drawbacks (doesn’t heal) thereof. As a consequence, Marvin does not age in the normal sense. With many replacement parts, he manages to end up being several times older than the universe itself before finally expiring.

The exact level of Marvin’s INT is somewhat up in the air. He mentions being 50,000 times more intelligent than Trillian, which would be 15 APs more than Trillian’s INT. Trillian is sometimes quite smart, so she could have anywhere from a 6 to a 10 INT.

However, Marvin also comments that he is billions of times smarter than an alien mattress (with whom he is having a conversation), and the _narrator_ mentions that Marvin is billions and zillions (and so forth) more intelligent than most people. This level of inconsistency can only be dealt with by choosing an arbitrary large INT for Marvin, which I have done.

Marvin was a prototype of the Sirius Cybernetic Corporation’s Genuine People Personality robots.

Marvin was first seen aboard the Heart of Gold, along with Zaphod Beeblebrox and Trillian. After they picked up Arthur Dent and Ford Prefect, they briefly visited the legendary planet of Magrathea.

In the novels, the various characters escape Magrathea in the Heart of Gold before eventually ending up on one of the Frogstar planets. Marvin is left alone outside while Zaphod asks the computer to take them to the nearest restaurant. In this case, the nearest (in space, if not in time) restaurant happens to be Milliways, the Restaurant at the end of the universe.

After joining up with the others again, Marvin helps the group steal a Disaster Area stuntship. It is preprogrammed to dive into a sun. After a near escape (during which Marvin is left behind), the others go on to have various wild adventures.

In the novels, Marvin is rescued. However, his leg is removed by the robots of Krikkit, who need it as part of a Key to unlock a Slo-Time field around their planet. Marvin is left with a sort of peg leg in its place.

Marvin is then captured by these robots, who take him to their central command. Big mistake. Soon, Krikkit robots are feeling listless and unwilling to kill even Zaphod. Many individual robots deactivate themselves.

Marvin meets up with the other characters. But eventually, the characters go their separate ways again. Marvin has a series of adventures which leave him many times older than the universe itself (thanks to time travel). He meets up with Arthur Dent and a girl named Fenchurch, who help him see God’s last message to the universe.

Then he finally expires once and for all.

In the novels, all we know about Marvin’s appearance is that he is silvery-colored and has red triangular eyes.

In the television program, he has a peculiar flat head with a unchanging expression on it. In the 2005 film, he looks like movie merchandise.

Marvin doesn’t get along with anyone. Mainly because he goes on and on about how miserable he’s feeling and how badly people treat him, which just makes people want to treat him even worse.

“I think you ought to know I’m feeling very depressed.”

It is virtually impossible for the

Source of Character: Hitchhiker’s Guide to the Galaxy novels by Douglas Adams(and the radio series starring Peter Jones as the book.). 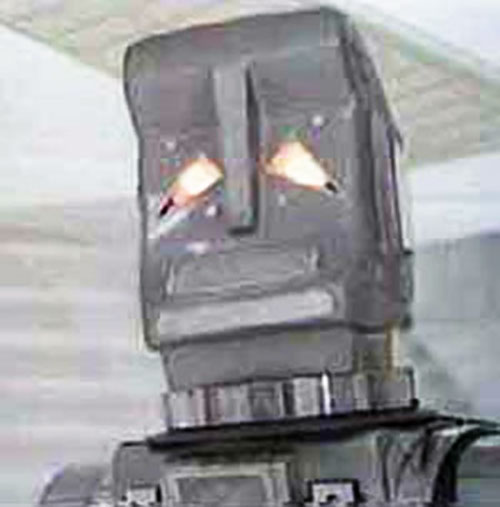